Japanimation godhead Hayao Miyazaki takes a deranged and delightful voyage to the other world, where parents become pigs and the Radish Spirit rides the elevator. 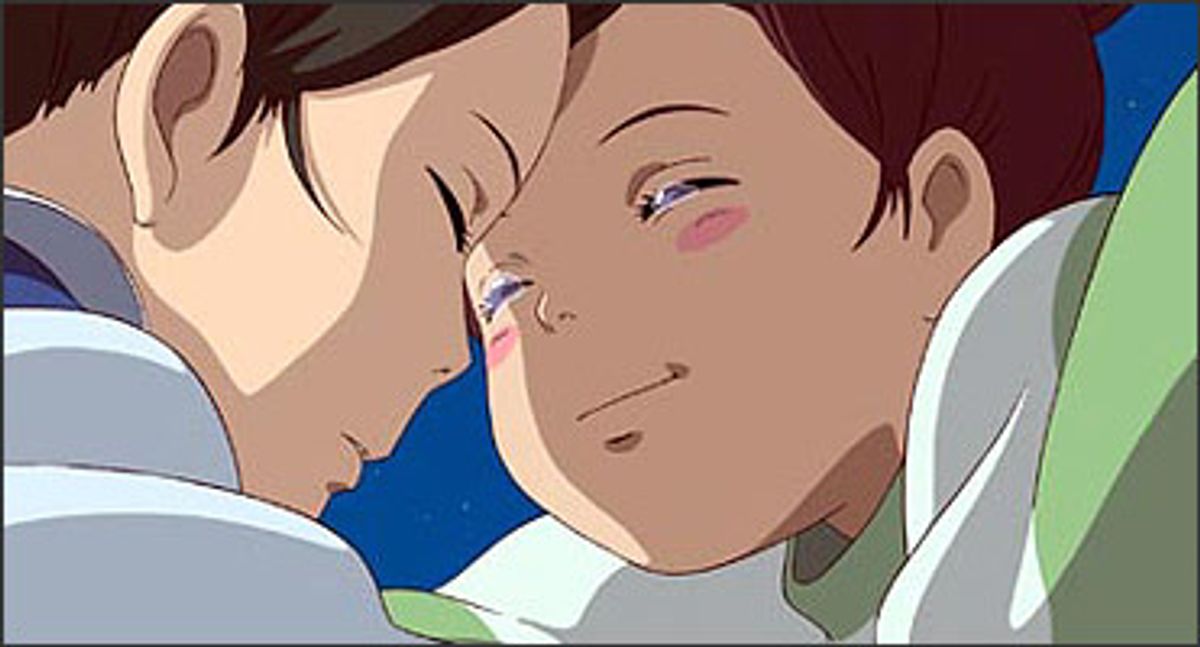 Most of the way through Hayao Miyazaki's latest animated feature, which is being released in America under the title "Spirited Away" (its Japanese title, more or less, is "Sen and the Mysterious Disappearance of Chihiro"), a young girl takes a train journey. The train runs on tracks that are partially submerged in water. We never see the train conductor's face, and by now we know enough to be grateful. Her fellow passengers are translucent specters and her traveling companions include a tiny, mosquito-like bird, a chubby mouse-hamster creature (formerly a very large baby) and a masked demon named No-Face who has been 86'd from the bathhouse of the spirits for eating everybody in sight. Compared to what has come before, this part of the movie is an oasis of calm and normal narrative.

Fans of anime, the classic tradition of Japanese animated film, already know Miyazaki, the acknowledged master of the form whose landmark works include "The Castle of Cagliostro" (1979) and "My Neighbor Totoro" (1988). "Princess Mononoke," his epic Tolkienian eco-fantasy, was not quite a hit in its 1999 English-language version, but nonetheless widened the scope of Miyazaki's audience and blew a lot of American viewers' minds (including mine). This new English dub of "Spirited Away" boasts nowhere near the star power of "Mononoke" (which featured the voices of Billy Crudup, Claire Danes, Minnie Driver and Billy Bob Thornton, among others), and the movie itself won't offer most viewers the same prodigious emotional highs and lows.

Don't get me wrong: This is still an extraordinary Miyazaki concoction, perhaps the most outright hallucinatory of his films. "Spirited Away" is a trip, in the literal, metaphorical and indeed lysergic senses of that word. Ostensibly, it's the story of a girl's voyage into the spirit world to rescue her parents, who, in typical idiotic adult fashion, drive on a road where they shouldn't drive, eat food they shouldn't eat and end up getting turned into pigs. But this premise is, as usual, mainly an excuse for Miyazaki's imagination and id to free-associate, channeling and repurposing elements of Eastern and Western mythology, Lewis Carroll's Alice, E. Nesbit, "Where the Wild Things Are," George Herriman's "Krazy Kat" comic strip, Mervyn Peake's Gormenghast trilogy and God only knows what else.

This movie is so druglike that you'll probably start suspecting at some point that you're actually asleep, since what's unfurling on-screen is more like the arbitrary symbolic language of dream than what usually happens on film. For me that moment arrived when young Chihiro (voiced by Daveigh Chase) is riding in the elevator to the top floor of the spirit bathhouse with Lin, an older girl who has become her protector. (Why do spirits need to take baths? To wash off all the gunk they accumulate in our world, naturally enough.) The elevator doors open and Lin blinks at the pale, massive shape in front of them. "Oh!" she says. "The Radish Spirit!"

Ultimately, the sheer piling-on of phantasmagorical imagery -- some of it delightful, some of it nightmarish -- along with the not-quite-nonsense hops and skips of the plot, will convince you that you can't be asleep, because only Miyazaki's dreams are this amazing. Through it all, Chihiro, in classic Alice fashion, remains a recognizable little girl of our world, committed to redeeming Mom and Dad from the pigpen but quick to adjust to the peculiar conditions of her new surroundings.

To stay in the spirit world and thus have a chance of rescuing her parents, Chihiro must ask Yubaba for a job in the bathhouse, a request the fearsome witch cannot refuse. But when Yubaba signs you up she also takes away your name and gives you a new one. And the longer Chihiro -- who is now called Sen -- stays on the other side, the closer she comes to forgetting everything: her name, her life in the human world and her oinking, snorting parents, who may soon end up on Yubaba's breakfast table.

Denizens of the bathhouse aren't thrilled to have a human working among them, but despite the deranged spectacle around her, Chihiro/Sen remains pure and direct. She wins even Yubaba's trust after dealing fearlessly with the disgusting Stink Spirit (probably this movie's most amazing episode), and is the only person who understands and indeed sympathizes with the all-devouring No-Face. But when Haku (Jason Marsden), the half-boy, half-dragon with whom she's fallen in love -- and whom she may dimly remember from the human world -- is badly injured and needs her help, Sen bravely ventures out on the last phase of her journey; even her porcine parents will have to wait.

To those who want to ask practical questions, such as whether "Spirited Away" is an appropriate movie for children, I have no answers. Arguably it isn't an appropriate movie for anybody. It will disturb you as much as thrill you, make you wonder whether the boundaries between life and death, reality and fantasy, imagination and insanity are ever what they appear to be. But if your child, or you yourself, has a wild and dreamy streak and an appropriate contempt for high-minded adult certainties and well-adjusted behavior, then by all means don't miss it. Just remember the rules: Hold your breath while crossing the bridge, and don't wink at the Radish Spirit.