U.S. officials say the White House is exaggerating the threat posed by Saddam and pressuring the intelligence community to "cook the books." 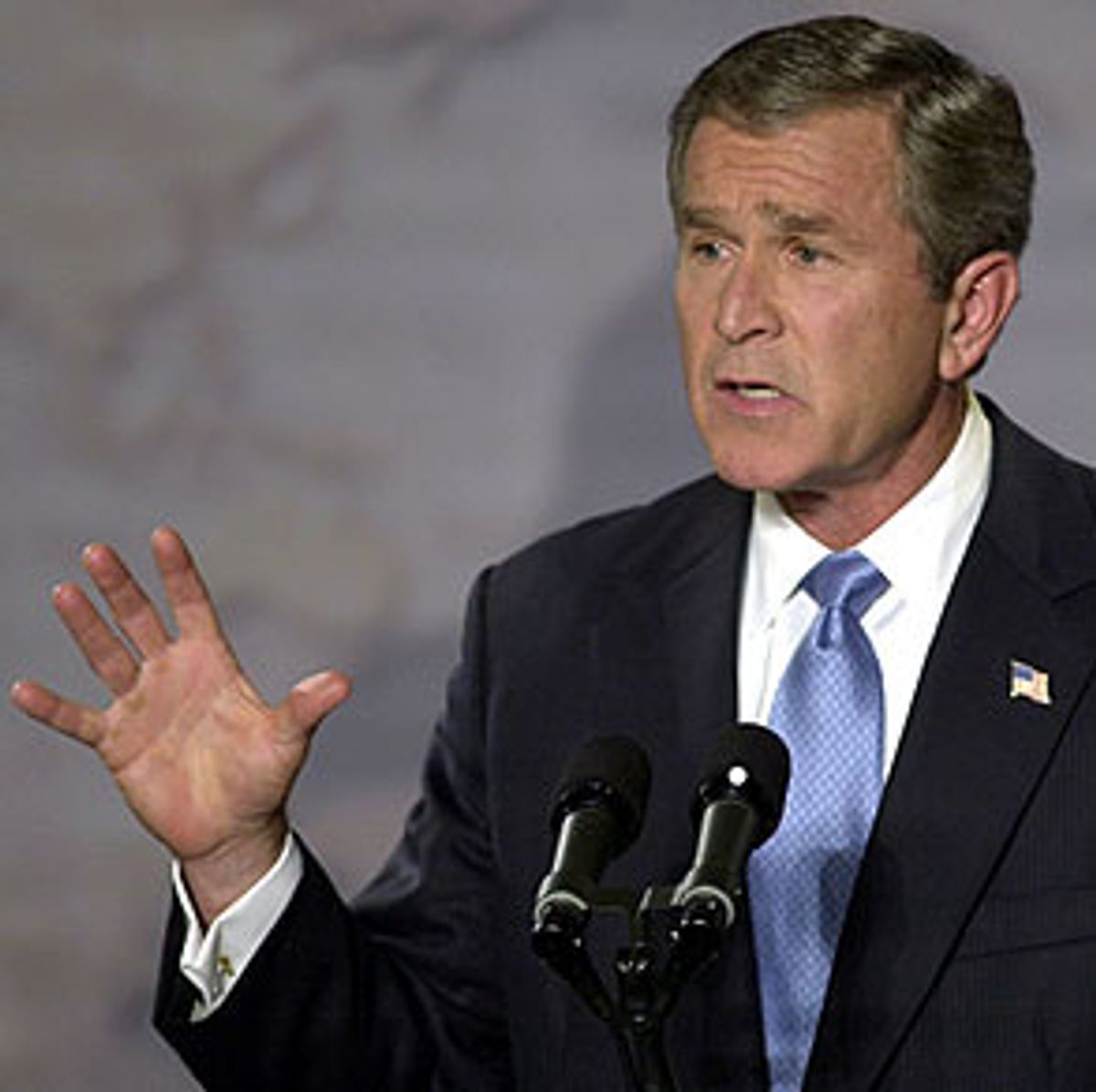 On Monday, President Bush took to the airwaves to try to convince Americans that Saddam Hussein poses an imminent threat to the United States. He gave a long list of reasons, emphasizing Saddam's ties to al-Qaida and the likelihood that he would acquire nuclear weapons soon. But according to the director of the CIA and numerous intelligence and diplomatic sources within Bush's administration, many of the president's arguments are exaggerated or distorted.

You won't hear U.S. officials say that publicly, though, because intelligence sources say they are being leaned on by higher-ups to support the get-Saddam program -- never mind the facts. In a damning article by Knight Ridder reporters Warren P. Strobel, Jonathan S. Landay and John Walcott that appeared Tuesday, one U.S. official is quoted as saying, "Analysts at the working level in the intelligence community are feeling very strong pressure from the Pentagon to cook the intelligence books."

Unfortunately for Bush, that pressure apparently does not extend to CIA Director George Tenet, who told Congress in a letter that Iraq "for now appears to be drawing a line short of conducting terrorist attacks with conventional or chemical or biological weapons against the United States." Flying even more directly in the face of Bush's war plans was Tenet's statement that if Saddam became convinced a U.S. attack was inevitable, "he would probably become much less constrained in adopting terrorist actions. Such terrorism might involve conventional means, as with Iraq's unsuccessful attempt at a terrorist offensive in 1991, or chemical or biological weapons."

Gen. Wesley Clark, the former NATO supreme European commander, made the same point in testimony before Congress on Sept. 23. By approaching Saddam the same way we approach al-Qaida, Clark said, "it is also possible we will have incentivized Saddam Hussein now as a last-ditch defense to do what he wouldn't have done before, which is, well, find me the nearest members of al-Qaida, here take this sack and do something with it."

Then there is the awkward matter of the CIA report on Iraq released last week, which concluded that U.N. inspections actually worked before they were halted in 1998, leaving Saddam's military and his chemical-weapons program weaker than they were in the 1980s.

In other words, the head of American intelligence and a top military man don't think Saddam is planning terrorist attacks against the U.S. now, but might if he was convinced we were coming in after his head. And the CIA says that Saddam's military machine poses less of a threat to the U.S. than it did a decade ago.

You'd think this was the kind of information that the president of the United States would share with the American people in a major televised address about a looming war that could result in the deaths of thousands of American troops. (In his new book "The Threatening Storm: The Case for Invading Iraq," former CIA analyst Kenneth M. Pollack estimates that the U.S. could suffer as many as 10,000 combat deaths -- and he supports an invasion.)

But the White House is not interested in putting all of the facts before the American people. It wants to whip up war fever. And if doing that requires making irresponsible claims, so be it.

Bush's most dubious claims are his inflammatory charges that Iraq has ties to al-Qaida. "We know that Iraq and the al-Qaida terrorist network share a common enemy -- the United States of America," Bush said. "We know that Iraq and al-Qaida have had high-level contacts that go back a decade. Some al-Qaida leaders who fled Afghanistan went to Iraq. These include one very senior al-Qaida leader who received medical treatment in Baghdad this year, and who has been associated with planning for chemical and biological attacks. We have learned that Iraq has trained al-Qaida members in bomb making, poisons, and deadly gases. And we know that after Sept. 11, Saddam Hussein's regime gleefully celebrated the terrorist attacks on America. Iraq could decide on any given day to provide a biological or chemical weapon to a terrorist group or individual terrorists. Alliances with terrorists could allow the Iraqi regime to attack America without leaving any fingerprints."

Defense Secretary Donald Rumsfeld, working from the same script, said on Sept. 26 that U.S. intelligence had "bulletproof" evidence that Iraq and al-Qaida were linked and that there was "solid evidence" that al-Qaida members were in Iraq.

To hear Bush and Rumsfeld talk, you'd think that al-Qaida and Saddam Hussein were the closest of allies, united by their hatred of the Great Satan, and that Saddam is just waiting for the right moment to unleash terror attacks on the U.S. What they fail to mention is that al-Qaida is a radical Islamist group that hates Saddam's secular Ba'ath regime, and that Saddam detests Islamist mullahs, who threaten his regime, and has brutally murdered many of them. According to former CIA analyst Pollack, members of Iraq's intelligence service, the Mukhabbarat, and al-Qaida members have occasionally made contact, but "none of the Western agencies has found any evidence of sustained contact or cooperation. Instead, whenever information has been available, it has demonstrated that neither side wanted to have too much to do with the other and they mostly went their separate ways." This makes sense: Why would Saddam give members of a group that detests him the means to strike at him?

As for Rumsfeld's "bulletproof" evidence of an al-Qaida-Iraq link, it might be more like spitball-proof. According to U.S. officials interviewed in the Knight Ridder article, "Rumsfeld's statement was based in part on intercepted phone calls, in which an al-Qaida member who apparently was passing through Baghdad was overheard calling friends or relatives ... The intercepts provide no evidence that the suspected terrorist was working with the Iraqi regime or that he was working on a terrorist operation while he was in Iraq, they said." Other sources for the administration's allegations of an Iraq/al-Qaida link may be equally dubious. In an interview on NPR, reporter Jonathan Landay noted that U.S. officials said some of these claims probably come from an al-Qaida prisoner who wants to push the U.S. into war with Saddam in the hope there will be more terror recruits as a result.

Bush and Rumsfeld's claim that al-Qaida members are in Iraq is misleading. Yes, Iraq may have supported a radical Iraqi Islamist Kurdish group tied to al-Qaida in their battle against other Iraqi Kurds, but this doesn't mean Iraq supports al-Qaida's global terror campaign: having the Kurds all kill each other is very much in Saddam's interest. In any case, the radical group, Ansar al-Islam, was operating out of the Kurdish security zone, which is under U.S. protection.

Finally, there is Bush's scary claim that Saddam could give weapons of mass destruction to terrorists to use against the U.S., thus leaving no fingerprints. But biological or chemical weapons do leave fingerprints. In any case, Saddam knows that he is likely to be held responsible for any mysterious terrorist attack against the U.S. Implicitly painting Saddam as an anti-American psychopath, Bush and his fellow war hawks want to make us think that the Iraqi leader is so irrational that such arguments don't apply. But the evidence suggests that Saddam is not an insane zealot, but a Stalin-like brute whose desire to remain alive and remain in power trumps everything else.

The fact is that the Bush administration has produced no hard evidence of significant ties between Saddam's regime and al-Qaida. The famous alleged meeting between Mohammad Atta and an Iraqi intelligence official has been pretty much debunked, and we are basically asked to accept the other claims on faith. Considering that no fewer than a dozen officials from different governmental agencies who were interviewed by Knight Ridder deny that there is any significant new evidence linking al-Qaida to Iraq, and the suspicious timing of the latest revelations -- shocking new al-Qaida/Saddam links found just as the White House rolls out its big war P.R. campaign! -- it does not seem unduly cynical to question their truthfulness.

Of course, it is possible that the Bush administration's dire interpretation of the few facts we have about Saddam is correct. But nations should not rush into war based on tendentious suppositions, exaggerated claims and half-truths. At a minimum, a war debate requires a full and fair airing of what is known -- including dissent or contradictory opinions from within the U.S. government. Even those who are willing to acknowledge that Saddam poses a threat to the U.S. must be troubled by the egregious way the Bush administration is putting its finger on the scales -- as if this was a cheap political lobbying campaign, not the gravest decision a nation can make.

By pandering to Americans' 9/11 fears and drawing strained connections between Saddam and al-Qaida, Bush is arguing his case like a prosecutor hellbent on conviction, not weighing the evidence like a judge trying to get at the truth. He may feel he is justified in doing so because he is so certain that Saddam poses a threat. In fact, he is only showing contempt for the American people, whose sons and daughters will have to pay the price of an invasion. Until the Bush administration makes its case more dispassionately and objectively, it will have little credibility as it presses for war.