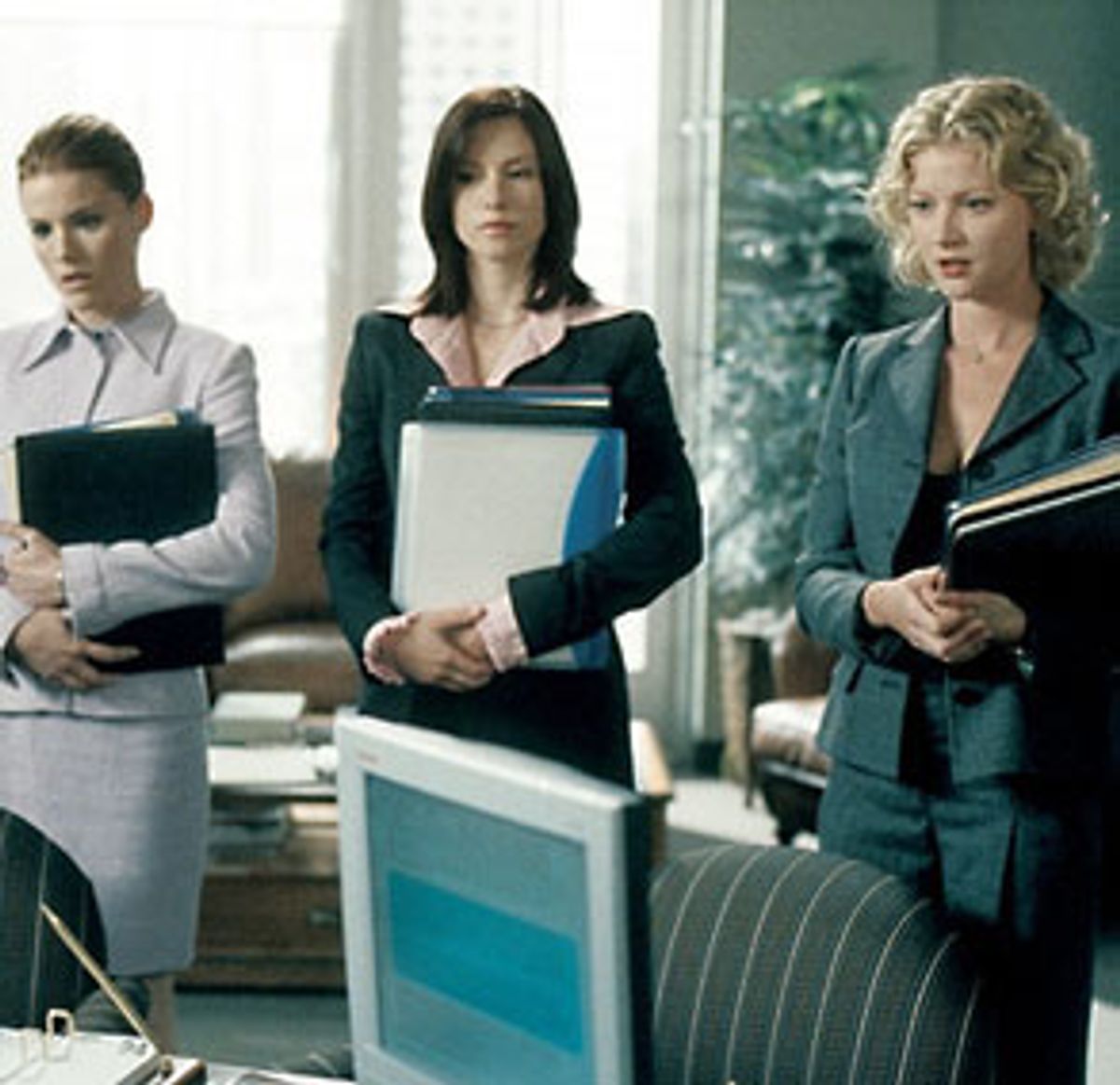 Someday, the American Bar Association will find a way to thank David E. Kelley for his lifelong contribution to the portrayal of attorneys as a proud, principled, sensitive, stylish and really hot people. Nobody (at least not recently) has done more for the lawyerly image than the creator of "Ally McBeal" and "The Practice."

But with "girls club" (no caps, no punctuation, no explanation), which premieres Monday, Oct. 21, on Fox, Kelley may have unwittingly reduced the size of his lifetime-achievement fruit basket by a few papayas. This time, the bard of the bar has set his sights exclusively on the personal trials of Lynne (Gretchen Mol), Jeannie (Kathleen Robertson) and Sarah (Chyler Leigh), roommates, former law school buddies and fellow associates at a San Francisco law firm. The club of the title refers to the lack of one, unless you count the fact that the three young women spend their every waking moment -- and even some of their resting moments -- together.

Straight off the bat, "girls club" establishes the apparently insuperable gulf separating the steely, mineral-hued and well-heeled world of the establishment "power dicks" the trio works for, and the messy, colorful lives of our heroines, who struggle gamely to make it to work on time. A "power dick" sips coffee from a china cup, while one of the girls cracks open a Mountain Dew for breakfast. Mars, Venus, vagina, penis, you get the picture.

For sassy girl lawyers in a conservative white-shoe firm, life is no Peggy Lee song. For one thing, everybody -- the female partners, David E. Kelley, this reviewer -- still calls them "girls." For another, nobody takes them seriously. Not when they explode at the office, badly bungle a case, or take their cheating boyfriend's car door clean off with a resolute swipe of a Volkswagen.

If the first two episodes are anything to go by, the girls split their time between being guided by their tempestuous emotions and taking umbrage when their bosses hesitate to give them any responsibility. In the first episode, Lynne gets Jeannie out of bed in the middle of the night to practice her opening statement on her. Jeannie sleeps with a teddy bear. And they wonder why they get the Rodney Dangerfield treatment at work. These girls, apparently, really will be girls.

With this show, Kelley reportedly wanted to focus more on the characters' personal stories than on trial scenes. But so far, "girls club" doesn't get at the inherent absurdities of office life or, for that matter, of youth. You get the sense that "girls club" is trying to dramatize the idea that youth, as David Rakoff put it, "is perpetrated on the young." Jeannie is being sexually harassed by a senior partner; Sarah, whose boyfriend may be gay, is being undermined by a catty fellow associate and undervalued by a bitchy partner; Lynne routinely interrupts herself with self-loathing asides such as "You suck" and "You should just be a waitress."

The problem is not that the characters are self-absorbed, neurotic and superficial; it's that on "girls club," the dichotomies are just a little too neat to be plausible -- or even interesting. A little self-deprecation would go a long way here. "girls club" lacks the goofy fantasy sequences of "Ally McBeal," which would be fine if the show's moral universe were not quite so black and white.

Here, virtue is handed out strictly along youth and gender lines: The younger and cuter, the more righteous. The authority figures are humorless, desiccated nags straight out of an Annette Funicello picture. The kids, we are given to understand, are all right, an idea that might be more palatable if these kids didn't have it quite so made in the shade.

Their apartment is enormous and luxurious, their wardrobes are stunning and extensive, the San Francisco they inhabit is a glinting, sunny place where the sky is always blue and well-toned girls can wear halter tops outdoors without hauling around their own personal heat trees. This club has clearly never waited for a bus on Market Street on a freezing August night while some urine-cured Summer of Love casualty tries to sell them a poem. They are too slick, take themselves far too seriously, and are too annoyingly idealistic (even the theme song, a pop rendition of "If You're Going to San Francisco," is sadly lacking in irony) for "girls club" to feel in any way subversive.

Whereas "Ally McBeal" had a way of uncovering emotional insights through what sometimes initially seemed like caricatured conflicts, "girls club" serves up the caricatures with a straight face. In fact, the young associates are so puffed up with entitlement and knee-jerk self-esteem that you almost wish they would get fired. Although there are scenes in "girls club" that anyone who has ever been a girl in a man's, man's, man's office can relate to -- the scene in which Jeannie finally addresses her boss's subtle come-ons and is subtly called crazy is nicely done -- "girls club" isn't really doing the girls any favors.

What's going on when they accuse female colleagues of undermining feminism whenever they feel diminished, and then turn around and call them things like the "Praying Mantis" and the "Eunuch" behind their backs? (Why does the Praying Mantis, for that matter, claim to be "the last bastion of testosterone" in the joint?) Why does Jeannie docilely submit to a shoulder rub from her creepy boss, then sass him when he asks her to take over a deposition? What's with Lynne's knack for turning the professional into the personal? After she is upbraided by her boss (Giancarlo Esposito) for bungling a murder trial, she retorts, "If it's your mission in life to make me cry, that's never gonna happen."

All this girls vs. boys (and girls vs. girls who act like boys) stuff feels misdirected. In fact, it feels like a step back from the days of coed bathrooms, boy-girl friendships and honest rivalries at Cage, Fish and McBeal. Ultimately, "girls club" is not the sort of club you'd want to accept you as a member.