I couldn't sleep! This clammy, creepy shocker brings the evil -- and the surrealist influence -- back to horror flicks. 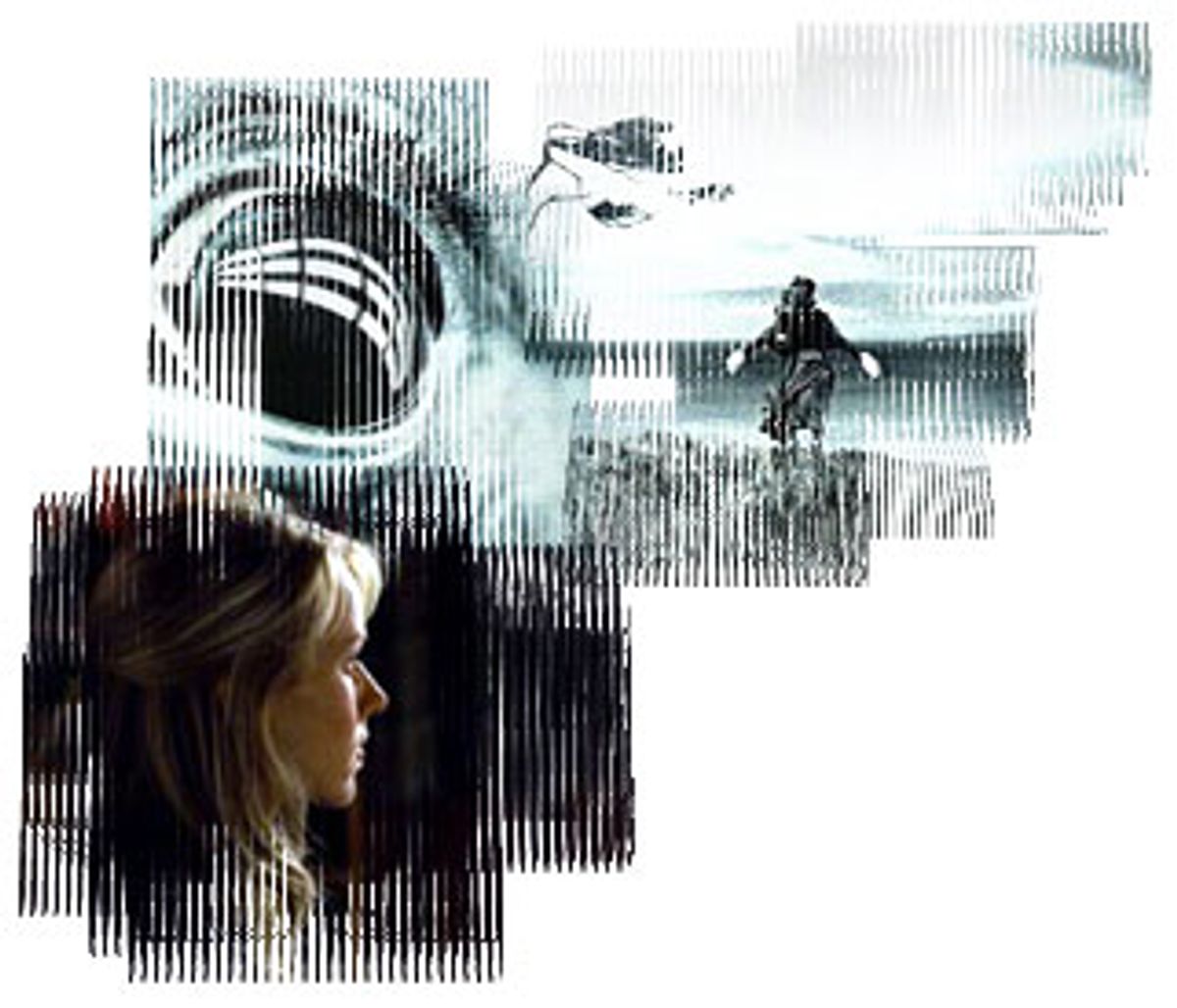 Like most horror movies, "The Ring" is something of a con game, a baited hook we bite at eagerly even though we aren't really fooled by it. But the line dropped here by director Gore Verbinski and screenwriter Ehren Kruger (adapting the Japanese cult film of the same name) wanders almost accidentally into deep, dark waters. What begins as a routine teen-horror flick -- an urban legend inflated to mythic status -- eventually becomes a clammy, claustrophobic bad dream in which the power of evil cannot be contained by love or death or technology or any other force.

I slept fine the night after I saw "The Ring," but the next night was a problem: At a certain point, long after midnight, I found myself sitting bolt upright in bed, completely possessed by two hair-raising moments late in the film. (For those of you who've seen it, one of those will be obvious. The other is that kid saying that line.) It's a slippery, murky, gray-green film, full of borrowings from "Twin Peaks," "The Sixth Sense," "Nightmare on Elm Street," "Poltergeist" and who knows what-all else. But it's also very much its own thing, a deviously engineered parasite that'll crawl under your skin and live in your nervous system for a while if you give it half a chance.

It's a pretty dippy premise: There's this weird videotape, see, one you can't find at Blockbuster. You watch it, you get a creepy phone call, and seven days later you die. We open, in fact, with one teenage girl eagerly recounting this scenario to another, who turns ash-white and announces that -- gulp -- she's seen the tape. Seven days earlier. A few minutes later, Teen No. 2 is alone with the TV set, which switches itself on and can't be switched off. Something very bad comes out of it. She dies.

The scene is borderline ridiculous and not all that scary. But, importantly, it isn't played for laughs the way most horror-movie killings are these days. It's our first clue that Verbinski and Kruger are after something different, something like the logic and symbology of the unconscious. This death is nothing more than the first go-round, the first iteration in a broadening and deepening pattern that -- as we discover exactly what the human race is up against in "The Ring" -- will become very frightening indeed.

Verbinski, who's shown little more than empty visual panache in such previous movies as "The Mexican" and "Mouse Hunt," doesn't keep us on the surface of this implausible yarn for long. Rachel (Naomi Watts), a hard-boiled, skeptical journalist who is the dead girl's aunt, begins to investigate teen whispers about the killer tape. She tracks it down easily, of course (the similarity in titles is an accident, but like the central artifact in "The Lord of the Rings," the videotape wants to be found). As soon as she watches it, the halfway plausible world in which the film opens -- a dreary, rain-soaked Seattle that looks like it might be David Lynch's screen-saver -- starts to melt and drip like one of Salvador Dalí's pocket watches.

Rachel gets the phone call. (A child's voice: "Seven days.") Nothing seems all that different at first -- except that her face, in photographs, now looks like an unrecognizable smear. She takes the tape to her estranged husband Noah (hunky if forgettable Martin Henderson), a video geek who reports that it wasn't created with a camera or any other known technology. Meanwhile, their son Aidan (David Dorfman), one of those spookily precocious kids who have become ubiquitous in the post-"Sixth Sense" horror universe, is receiving communications from person or persons unknown and drawing some troubling pictures.

This isn't much of an actor's movie, but the beautiful Watts -- the object of considerable Web fandom for her performance in "Mulholland Drive" -- plays Rachel as a finely calibrated instrument gradually going out of tune. Determined to solve the mystery before her seven days are up, Rachel, along with Noah and Aidan, is plunged into a dense and convoluted story that I shouldn't discuss in detail. It involves such archetypal Freudian and/or Jungian elements as a journey to a distant island, a lighthouse, an imprisoned child, an unsolved killing and an epidemic that renders horses suicidal. (One of the most shocking scenes in "The Ring" happens outdoors in broad daylight -- or as broad as daylight gets off the Washington coast, anyway -- and features a horse on a ferryboat.)

What I can talk about is the fact that "The Ring" incorporates the language of film surrealism more convincingly than any horror film I can think of since "Night of the Living Dead," "Carnival of Souls" and "Psycho." The killer videotape itself is an almost indescribable non-narrative montage in grainy black-and-white -- a woman in a mirror, a man at a window, a ladder against a wall, a centipede crawling from beneath a table and "the ring," a circle of light resembling the corona of a solar eclipse -- that strongly suggests such key surrealist works as Maya Deren's "Meshes in the Afternoon" or Luis Buñuel's collaboration with Dalí, "Un chien andalou."

As Noah comments after watching the tape (against Rachel's wishes), it's "very film-student." At the same time, anybody who's seen those kinds of art movies is familiar with the sensation: They don't make sense, and they're pretty creepy. But where does the creep factor come from? Is it because the images they've planted in our minds actually do add up to something, something that remains just outside our rational grasp?

As "The Ring" progresses, the boundaries between the film's "real" world and the videotape's world give way: The mirror and window appear in a real house (on the distant island, of course) and the ladder appears against a wall outside Noah's loft. A fly that appears on the tape can actually be plucked from the TV screen and set free. "Before you die you see the Ring," Rachel speculates, and indeed this turns out to be true.

OK, I'm not actually suggesting that "The Ring" is a serious art movie. But it is a seriously scary movie, largely because Verbinski and Kruger (the writer of "Scream 3" and "Arlington Road," among other films) remain true to the laws of their created universe and don't cheat their audience on the subject of evil. Who created the diabolical videotape in "The Ring," and what do they want? Well, just as in all the truly memorable horror movies, from "The Exorcist" to "The Texas Chainsaw Massacre" to "Nightmare on Elm Street," the dark forces don't want understanding or love or a Christian burial -- they just want to terrify and destroy us.