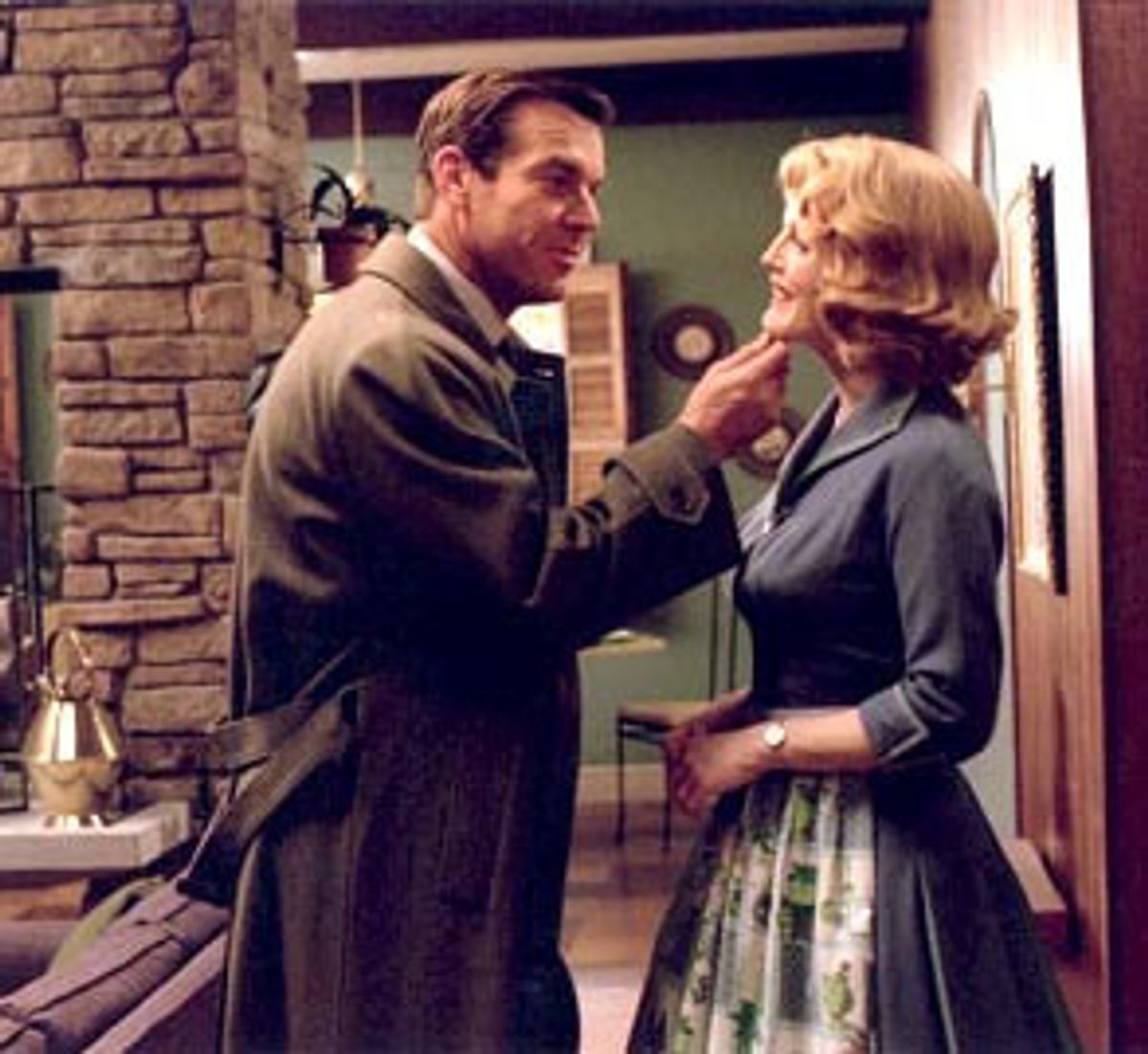 With Julianne Moore blazing at its center in red and gold, like a bouquet of autumnal foliage in a fine china vase, Todd Haynes' "Far From Heaven" is an explosion of synthetic delights. Which is not to say it lacks emotional impact -- far from it. "Far From Heaven" is a movie for hardcore film geeks and regular folk alike, a stunning, and stunningly improbable, fusion of postmodern pastiche and old-school Hollywood melodrama. It's both a marvelous technical accomplishment and a tragic love story that sweeps you off your feet.

In obsessively emulating the style, tone and posh suburban settings of legendary 1950s director Douglas Sirk, Haynes has paradoxically set himself free. He has always been a meticulous visual craftsman whose talent for the medium is obvious, but he has also seemed (to me, anyway) too cerebral for his own good. Film is not primarily an intellectual art form, and in such previous works as "Poison," "Safe" and the baffling glam-rock tribute "Velvet Goldmine," Haynes' aesthetic seemed constrained by the leaden hand of pomo academic theory. You wondered who his ideal audience member was: A U.C. Berkeley grad student working on a new translation of Foucault?

Haynes hasn't left queer theory behind with "Far From Heaven"; instead, in appropriating Sirk's overripe narrative mode and glorious Technicolor aesthetic, he's found exactly the right container for it. It's no exaggeration to say that Sirk's classic melodramas, from "Magnificent Obsession" to "Written on the Wind" to "Imitation of Life," are already about gender, sexuality, race and American hypocrisy. If the allegorical fable about a noble suburban housewife and the scandalous implosion of her family that Haynes spins in "Far From Heaven" is not precisely one that Sirk could have told 45 years ago, it's nonetheless true to Sirk's spirit in every way.

More specifically, "Far From Heaven" bears a family resemblance to Sirk's 1955 "All That Heaven Allows," in which the widowed Jane Wyman sends her uptight suburban community into a tizzy by falling for her younger gardener, played by Rock Hudson. Here, however, the circumstances are different: It is indeed the late '50s, and Cathy Whitaker (Moore) is married to Frank (Dennis Quaid), a Connecticut sales executive for a television manufacturer called Magnatech. Frank and Kathy, in fact, make such a handsome couple that they appear in magazine ads together as Mr. and Mrs. Magnatech, avatars of a brave new world of American consumerism.

From the note-perfect opening credits and the first sweeping chords of Elmer Bernstein's opulent score to the tasteful modern furniture and porcelain figurine lamps in the Whitakers' updated colonial, "Far From Heaven" is so intensely stylized you can't help feeling, at least at first, that some kind of ironic commentary is intended. It's only natural to giggle at the Magnatech ads, at the perfect Technicolor streets with their spotless arrays of Oldsmobiles and Plymouths, at the outrageous high-heeled pumps worn by Cathy's catty best friend (Patricia Clarkson, doing an uncanny impersonation of one of those Agnes Moorehead supporting roles) or at Moore's voluminous skirt in aquamarine satin, which looks as if you could camp a pack of Cub Scouts under it or convert it into parachutes in wartime. (For production designer Mark Friedberg -- who concocted a different kind of suburban wonderland for Ang Lee's "The Ice Storm" -- and costumer Sandy Powell, this movie can only have been a dream come true.)

But Haynes is far too sophisticated (in a good way) to make derision his main instrument here. After you get over the sheer artificial plushness of the movie, you begin to notice that its characters -- even though they're the artfully overdrawn types of '50s Hollywood -- are experiencing very real emotions. Frank and Cathy's marriage, which comes with the requisite two small children, is by no means loveless, but it's definitely beginning to fray. Frank drinks more than he lets on, and actually gets picked up by the cops after a late-night fender-bender. (It's perfectly true that drunk driving merited little more than a wink and a nudge at the time.) There are other, well, issues that keep him away from home late at night, and if you know Haynes' work at all you won't have any trouble guessing what those might be.

Dennis Quaid is very fine here, carefully underplaying the role of a tormented American dad who doesn't understand himself at all, let alone his increasingly lonely wife. Haynes' dialogue is impeccably true to the genre throughout the film, and never more so than in the prodigiously indirect scene when Cathy and Frank try to discuss his predicament.

Frank: "I promise you, I'm gonna beat this thing."

Of course Sirk's melodramas epitomize the "women's picture," and "Far From Heaven" is really Cathy's story. As glowing and lustrous as Cate Blanchett's Elven princess in "The Lord of the Rings," Julianne Moore is both the visual center of the film and also its heart and soul. Although she's seemingly as settled and averse to change as any housewife of her generation, Cathy is revealed in adversity to be a daring, generous and adventuresome spirit, as noble a romantic heroine in her way as Anna Karenina.

Indeed, as a busybody newspaperwoman puts it during an interview for the society page (a scene that does play as hilarious parody), Cathy is "a woman as devoted to her family as she is kind to Negroes." Actually, Cathy is quite startled by the strange black man she sees in her yard during the interview, and goes outside to confront him. When she learns that Raymond (Dennis Haysbert) is taking over the business of his father, their longtime gardener, who has just died, she apologizes warmly. That's the moment when we first see what a fundamentally genuine and lovely person she is, whatever we may make of her material circumstances.

Part of the game Haynes is playing in "Far From Heaven," in fact, is to point out that all too often we do judge people by their external characteristics. If the white citizens of Hartford, Conn., in 1958 are likely to look at Raymond and see nothing but a stereotype, the same goes for us when we look at Cathy and her oft-caricatured life of middle-class, "I Like Ike" privilege.

Haysbert (who plays President David Palmer on the Fox drama "24") is a calm and dignified presence, as always, but against the increasingly symbolic landscape of "Far From Heaven" it's hard not to see Raymond as something closer to a metaphorical Other than a real person. When Frank's dark secret threatens to destroy the Whitakers' marriage and Cathy finds herself weeping in the yard, Raymond appears as if magically, a consoling presence bearing a lost scarf of hers he has retrieved from a tree.

As Frank descends deeper into booze and misery -- interestingly, although Haynes presumably sympathizes with Frank's "problem," he doesn't let him off the hook for damaging Cathy and his kids -- Raymond and Cathy begin to forge an indefinable relationship. Neither of them directly raises the almost unthinkable prospect of a love affair, but for a white woman to form a close friendship with her black gardener in the Hartford of 1958 is every bit as shocking. Cathy scandalizes the town merely by discussing Joan Miró with him at a gallery opening, and when they go to a bar-and-grill in Raymond's neighborhood -- where they sweetly, hesitantly dance together in one of this film's several Kleenex-mandatory scenes -- the reaction from the black clientele is only marginally friendlier.

As is customary in Sirk's melodramas, the characters here stumble through emotional (and physical) violence toward at least a fragmentary resolution and partial self-knowledge. As Raymond tells Cathy late in the film, he imagines a world where, "for one fleeting instant," people could "see beyond the color, the surface of things." He's not just talking about racial bigotry; I understand the line as Haynes' plea to his audiences to resist the easy allure of style and superficial beauty, to seek profound connections in life as in art. Raymond and Cathy are trapped in a lovingly realized era, a kind of beautiful confection, from which they can never escape. But they've had their fleeting instant together. In our own age of so-called liberation, are we so much better off?