How the press transformed a hard-fought U.N. compromise on Iraq into Bush's miraculous feat of diplomacy. 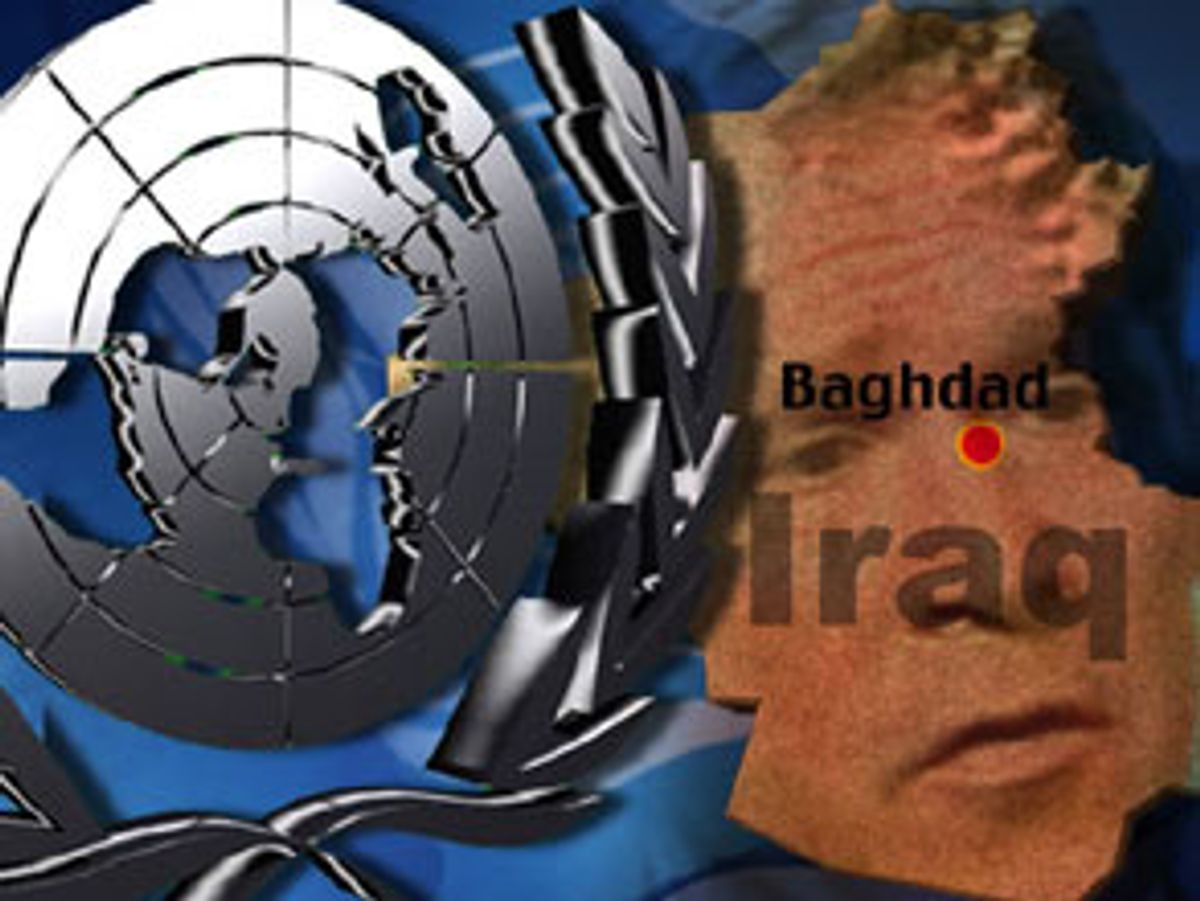 At this point, even staffers at the White House Communications Office must be shaking their heads at how easy it is to spin to the mainstream press, which sometimes seems so willing -- even eager -- to lend unquestioning support to a popular president. The latest example of the uncritical relationship came in the wake of the United Nations resolution, approved Friday, calling for the return of weapons inspectors to Iraq.

After eight weeks, the U.S. finally convinced key U.N. skeptics France and Russia to vote for the resolution that makes clear the international community's intention to deal with Saddam Hussein. The vote was unanimous, but to read the press accounts or to turn on cable TV, news consumers would have thought the White House had just brokered peace between Israel and the Palestinians.

CNN labeled the U.N. vote a "stunning victory for President Bush." The New York Times called it "a well-deserved triumph for President Bush." MSBNC reported that thanks to "tough arm-twisting," the president "got exactly want he wanted." Fox News reported the unanimous vote was "almost a miracle," while the Wall Street Journal's editorial page had no doubts about divine intervention, describing the Security Council vote as "one of those miracles of diplomacy."

Yet here's another way of analyzing the vote: After eight weeks of tedious negotiations, including two failed resolution proposals, the Bush administration finally gave in to long-standing demands from France and Russia, effectively handing control of the Iraqi conflict over to the U.N. and dimming the odds of a quick American strike.

But for a press corps that already marveled last week at Bush's midterm election results, the notion that the U.N. vote was anything short of a sweeping show of strength for the White House went largely ignored.

Ironically, it was state-owned media, the Voice of America, that handled the story with the most balance and foresight. Right from the outset, its dispatch made two key points that other news outlets preferred to downplay: "The Bush administration is claiming a major diplomatic victory with Friday's unanimous Security Council resolution to send U.N. weapons inspectors back to Iraq. But the process required nearly eight weeks of painstaking negotiations and entailed some concessions by Washington." (Emphasis added.)

Clearly, the U.N. resolution does represent a win for the White House since it embodies three principles the administration deemed mandatory from the outset: a specific indictment against Saddam Hussein, a demand for compliance with existing U.N. resolutions, and the threat of war if Baghdad fails to comply.

Yet France and Russia, which wield veto power at the Security Council, never really quarreled with those parameters. Instead, they were concerned that any Iraqi failure during the weapons inspection process would automatically trigger a military response by the United States whenever it chose, and without any further Security Council input. That's why there was so much discussion in recent weeks about removing "hidden triggers" within the resolution.

France initially proposed a two-step approach in which the Security Council would first pass an inspection resolution and then reconvene to address any accusations of noncompliance and perhaps vote again on a resolution of war. The two sides seemed to have met in the middle; if any accusations arise, the Security Council will reconvene, but the United States has made it clear it is not obligated to abide by any such vote.

That agreement could create political problems at home for the White House if Bush insists on waging war even if the Security Council does not think Iraq's violations are serious enough to justify the use of force; most polls show Americans want broad international support for any strike against Iraq.

Nonetheless, because of the compromise, it's the U.N. -- not the U.S. -- that will shape the conflict for weeks and perhaps months to come. Bush still has the power to act whenever he wants, but instead of Americans deciding whether Iraq is complying with inspections, that crucial task now largely rests with chief U.N. weapons inspector Hans Blix, a 72-year-old Swedish diplomat.

Other, smaller concessions abound. Long gone is the one-step process resolution with triggers that the U.S. was advocating, as well as open discussion of "regime change." More recently, the White House wanted Baghdad to provide weapons inspectors with a full accounting of its nuclear, chemical, biological and missile programs, all within 23 days of the resolution's passage. That has now been extended to 30 days. The White House wanted Americans to be able to travel to Iraq both as weapons inspectors and bodyguards. That request was denied. The United States wanted to have a say in selecting the inspectors who would go to Baghdad. That request was also tabled.

The White House might argue that those points were never crucial to the final resolution and were simply built-in padding that could be effortlessly carved away in the negotiating process. True, but that doesn't answer the question of why it took eight long weeks for the excess to be finally stripped away last week.

National Review Online naively suggests that France gave in at the U.N. only after watching Republicans win big on Election Day. But there's no connection between the two events. Congress had already voted overwhelmingly to give Bush authorization to use force against Iraq, so it's doubtful French diplomats would care if three additional Republican senators will be seated in January.

The more pointed question, which the press has completely ignored, is: Why did the White House suddenly placate U.N. skeptics just 48 hours after Election Day? The breakthrough concession to France came last Thursday when the United States changed the wording on who could declare whether Iraq was in "further material breach" of inspections. That's a compromise the U.S. could have made weeks ago.

That raises the question of whether the White House strategy all along was to keep specific talk of war off the table during the campaign months of October and November, when polls showed support for an Iraqi invasion steadily declining among the American people. It's difficult to imagine the war plans leaked after Election Day, which call for a staggering 250,000 U.S. troops to invade Iraq, wouldn't have caused some swing voters to give pause before voting Republican.

But don't look for serious analysis of what role U.S. domestic politics played in the U.N. -- the topic has been effectively ignored. And don't look for a detailed examination of what role oil contracts played in winning over support from Russia and France. Both countries have longtime ties with Iraq and are apprehensive that American and British companies would get first rights on oil contracts in a post-Saddam Iraq.

In addition, Russia is also owed $8 billion by Iraq for old military arms debts incurred during the former Soviet regime. It's possible, experts say, that as a goodwill gesture toward Russia, the White House might have quietly helped guarantee part of that debt, or Russia's oil contracts.

"I'd be surprised if there were not private discussions between the two presidents about Russia's interests," says Saunders at the Nixon Center.

Reporters, though, don't seem too interested. Over the weekend, in the 16th paragraph of a 17-paragraph story, the New York Times made passing reference to possible quid pro quos, then noted that administration officials declined to discuss any specifics.

No doubt that's how the White House wants the press handle it.