Renee Zellweger and Catherine Zeta-Jones kick the movie musical revival with a brash and nasty tale about just what celebrity will get you. 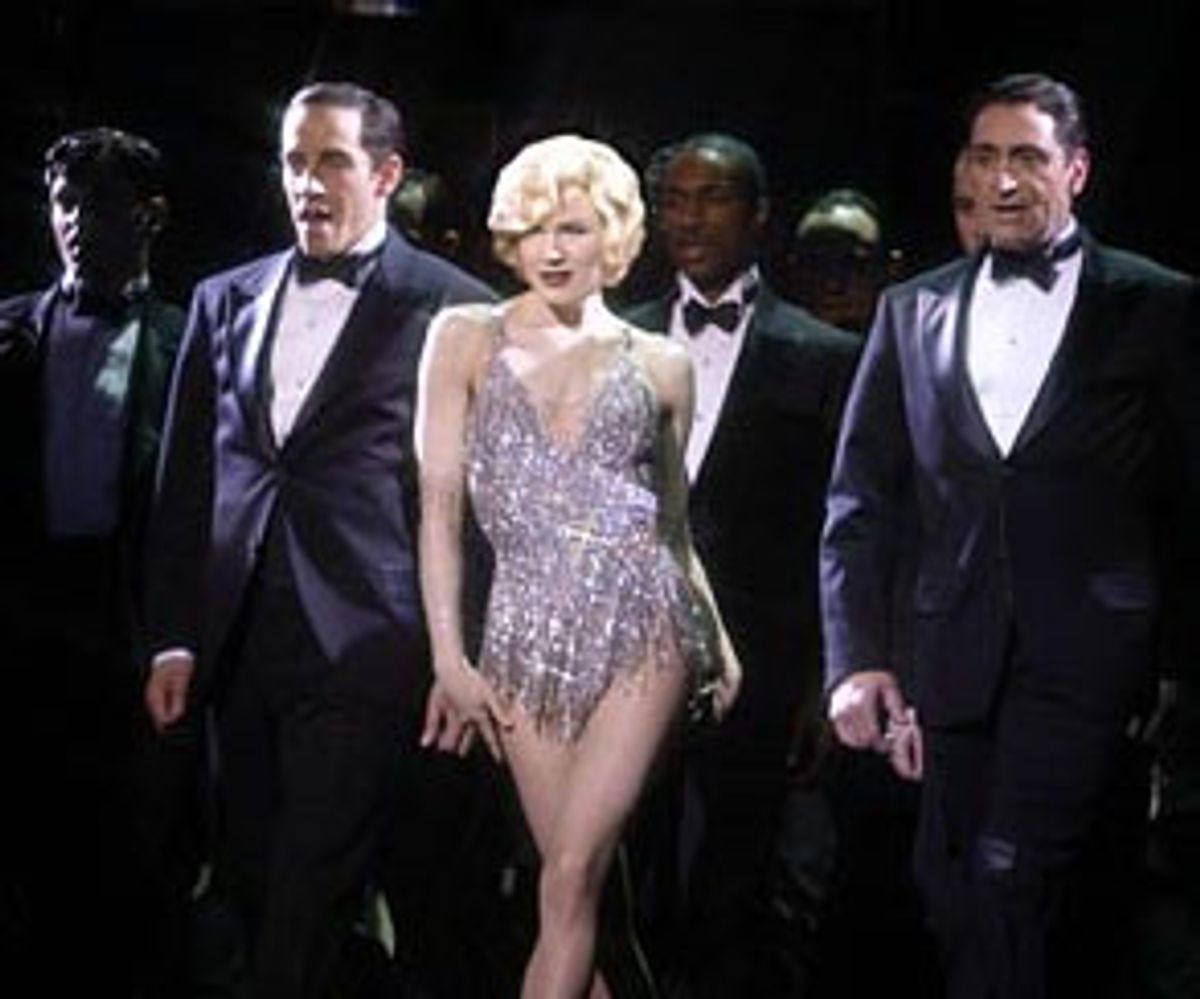 The legs go on for a mile and a half in "Chicago" -- Catherine Zeta Jones' take up the first mile and Renée Zellweger's the extra half. But the two actresses, who play Velma Kelly and Roxie Hart in Rob Marshall's devilishly grand movie version of the Bob Fosse Broadway musical, are equals in all other respects. They balance each other wonderfully, and it doesn't hurt that Marshall orchestrates everything else around them with near perfection: "Chicago" has almost single-handedly resurrected the tradition of the movie musical, a genre that has for the most part languished since its last great masterpiece, Herbert Ross's 1981 "Pennies From Heaven," which didn't attract the audience it should have. "Chicago" is sophisticated, brash, sardonic, completely joyful in its execution. It gives anyone who ever loved movie musicals, and lamented their demise, something to live for.

Marshall is a first-time director whose other movie work has been as a choreographer. Choreographers have to understand composition, what the body can and can't do, how arcs of movement mesh together seamlessly or disconnect, and, of course, how to conjoin movement with music so that the two seem inseparable. Marshall has the advantage of having a great eye as well: He seems to instinctively understand the link between physical and visual movement in the movies. (Fosse himself started out as a choreographer.) Marshall's picture is an object lesson in the ways a whole movie can be considered a dance routine: You need an instinct for pacing, a sense of what goes where and when, an understanding of where action must build and where it must recede, and a firm idea of where, in each frame, you want to draw the eye. (Do you want your audience to drink in the complete spectacle of a stage full of dancers, or is it time to narrow the focus on one fabulously garter-belted set of stems?)

Marshall pulls it all together in "Chicago," in a way that's suitably Fosse-like but also bears his own stamp of individuality. Its editing, by Martin Walsh, at first seems a little busy, but once you learn to trust it, you see how crucial it is to the movie's energy and lightness.

And "Chicago" doesn't bother to ratchet up the irony quotient to underscore the applicability of this sarcastic little tale of media manipulation at the beginning of the 21st century, because Marshall knows he doesn't have to. The material speaks for itself. Fosse's musical was based on a '20s era play by court reporter Maurine Dallas Watkins (it was turned into the 1942 Ginger Rogers movie "Roxie Hart"); Fosse and Fred Ebb reworked it, and Ebb and John Kander wrote the musical numbers. (The movie's sleek screenplay was written by Bill Condon, director of "Gods and Monsters.") "Chicago" is the story of a cute but tough jazz-age show-biz wannabe, Roxie Hart, who kills her lover in a fit of jealousy and while awaiting trial lands in the same jail where one of her idols from the stage, Velma Kelly, is awaiting trial for killing her husband and sister (who were doing her wrong). Advised by the slick, nobody's-fool prison matron "Mama" Morton (here played by Queen Latifah), Roxie persuades her gentle, devoted, milquetoast husband Amos (John C. Reilly) to raise enough money to hire hotshot lawyer Billy Flynn (Richard Gere) to get her off the hook. Flynn launches a publicity campaign that turns Roxie into a media darling -- and enrages Velma, also one of Flynn's clients, because it draws attention away from her own case. And Roxie, not content to just lap up the attention, embellishes it with her own sympathy-milking P.R. touches, including a faux pregnancy.

The movie's spectacular lineup of actors don't try to soften the glare of the story. It's still bitter and hard-edged, and deliciously entertaining for it. Marshall knows exactly how to stage ensemble numbers like "Cell Block Tango," in which Roxie and Velma's fellow prisoners explicate their innocence in song. (Their unifying refrain is "He had it coming!") Those numbers are dazzling without feeling too busy ; they engage and exhilarate without overwhelming us. The mood and tone of "Chicago" are very different from those of "Pennies From Heaven," but I wouldn't be surprised if Marshall had been somewhat inspired by Ross's picture. Even in the midst of the vibrancy of "Chicago," Marshall, like Ross, understands how to frame his visuals with an intense and quiet delicacy when it's called for, as when Roxie sings her ode to her loyal-pup husband, "Funny Honey." The sequence melds reality with fantasy in a way that makes Roxie's put-on sensitivity seem almost believable -- until, of course, she reverts to her usual state of conniving self-absorption.

Every actor in "Chicago" seems clued-in to the movie's purpose and vision, working together and separately to keep it moving at a clip. Richard Gere's Flynn is slick, wily and charming in exactly the right proportions. And although I suspect his tap-dancing routine in "Razzle Dazzle" was carefully edited to disguise the fact that the truly fancy footwork wasn't his own, it doesn't much matter -- Gere has the legs and, maybe more significantly, the face of an old-time tap dancer, so the flim-flam works.

John C. Reilly is astonishing (although, really, when is he ever not?) as Amos, and he carries his small-but-big number, "Mr. Cellophane," easily and beautifully. And Queen Latifah, as the prison matron, is intimidatingly sexy in the best way: Marshall and the gifted cinematographer Dion Beebe shoot her number, "When You're Good to Mama," in burnished but brilliant golds that pick up the honey in her skin -- a visual counterpart to the honey in her voice. (I would have loved to have seen Latifah and Catherine Zeta Jones duet on the show's wonderful, subtle as a hooker in a cathedral "Class," which doesn't appear in this "Chicago." But you can't have everything.)

And how about those girls? I know there's a feminist commandment that forbids calling anyone over the age of 16 a girl, but I'm ready to take the heat, because in this context, Zeta-Jones and Zellweger simply are girls in the classic show-business sense. Zeta-Jones, in her sleek ebony bob, is so offhandedly funny and sexy (and just a little nasty), that she wins the blackest, wickedest parts of our hearts immediately. (She can sing and dance, too. It's about time someone gave this former Welsh national tap dancing champion a chance to show off.)

And Zellweger, who can also sing and dance, is just a mighty-mite: Her Roxie has a halo of platinum curls, a face like a cherub, and the will of one of those outlawed iron-jawed animal traps. The two characters play their toughness, and their fabulous good looks, against one another as if it were all just a game. Zeta-Jones is sleek, foxy, icicle-cool; Zellweger is compact, muscular, the mouse that growled. Watching them together (as well as separately) is pure pleasure; they're visions of calculating naughtiness in chemises and tap shoes.

"Chicago," innovative as it is, didn't spring from a vacuum. There have been a few good, and even close to great, movie musicals in the past 20 years. Baz Lurhman deserves all the credit he's gotten for exploding the movie-musical genre with the messy but heartfelt "Moulin Rouge"; I love Jacques Rivette's 1995 "Haut/Bas/Fragile," a movie too few people have had the chance to see; and I always stand up for Kenny Ortega's much-maligned 1992 "Newsies," a purely traditional musical with the right sense of energy and spirit. (And doesn't it strike anyone else as ballsy that Ortega should have made a pro-labor musical for the Walt Disney Company?)

But I think "Chicago" represents an even sharper angle of what Luhrmann started. It's a courageous picture, and an ambitious one that lives up to its goals. Fosse's "Chicago" opened, in 1975, to fairly lukewarm reviews from critics, who were turned off by Fosse's cynicism, but audiences certainly took to it. This "Chicago" is without a doubt designed to be a crowd pleaser. Yet it never panders to us; it doesn't clutter up the screen just so we'll have a million things to look at every minute (something so many Broadway musicals get wrong these days; it's as if they have to exhaust you to fool you into thinking you've gotten your money's worth). Marshall's "Chicago" might have made a hundred small mistakes and at least a dozen fatal ones; instead, it moves along with more grace and agility and verve than we might have dared to expect. This dry, cynical fable about the currency of celebrity is actually one of the most hopeful movies of the year: Now we know there's somebody out there who still knows how to make 'em.