Yeah, "The Bachelorette" and the rest of the next-gen reality shows are the mutant offspring of deformed parents. Sometimes that's better. 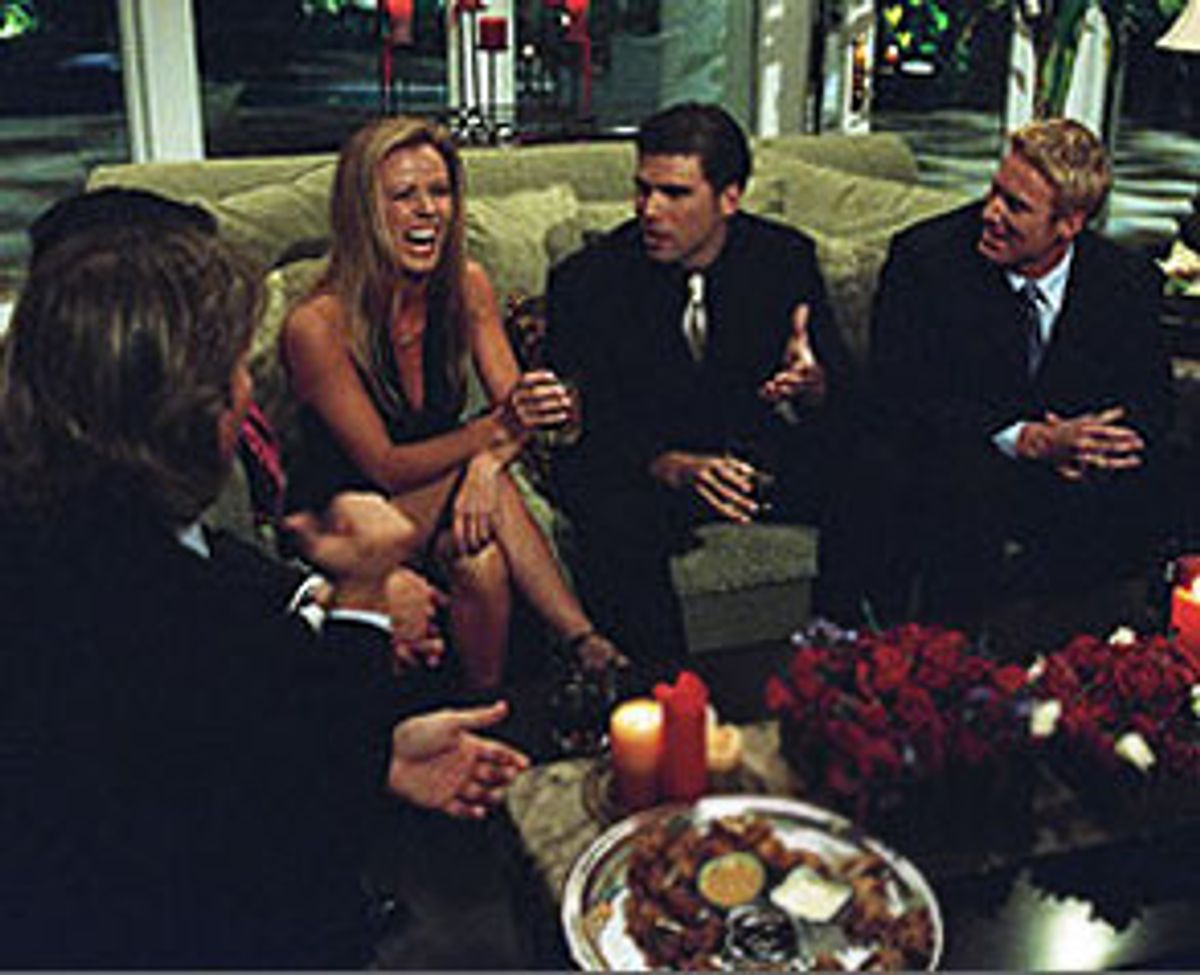 You don't have to be a Raëlian to appreciate the fruits of all this reality TV gene-splicing. As the new generation of fishbowl programming is beginning to demonstrate, sometimes clones really do make for more interesting babies. This next generation has apparently decided to counter accusations of unreality by compulsively referencing "reality." The results are, if not exactly realistic, then at least sometimes obliquely true to life.

"The Bachelorette," which debuted this week on ABC, could not have existed without "The Bachelor" -- in large part because this most recent foray into competitive matchmaking was inspired by the enduring popularity of former runner-up "Bachelor" bride Trista Rehn. The 29-year-old former Miami Heat dancer and pediatric physical therapist whose "heart was broken" by Alex Michel, the network's first slick man-prize and "Bachelor" No. 1, apparently launched a thousand letters to the network. Now that she's had time to heal, she has returned to ABC -- where else? -- to find herself a husband. Twenty-five bachelors have entered an extended voluntary confinement for the pleasure of vying for her hand (or whatever else she wants to give up).

That Trista's suitors arrived on-set with crushes firmly in place adds to the credibility factor, which is not to say that the boys aren't, you know, nuts (one aspiring groom turned down a contract to play professional basketball in Germany for the "once-in-a-lifetime opportunity" to be chosen by Trista). But at least they appear to be nuts in the old-fashioned sense: obsessive, delusional, given to flights of imagination tinged with undercurrents of barely suppressed rage at the mere thought of being rejected. After all, they've been watching Trista. And they've been waiting. And they've been telling their friends -- while watching her get rejected by Michel in favor of the slightly less inhibited and considerably more pneumatic Amanda Mash -- "I'm going to date that girl someday."

Could it happen in the real world? No. But it could happen on "The Real World," or some genetic variant thereof. And anyway, "You can meet a husband through any process," Trista murmurs sweetly to the show's host when he asks her if she finds the situation in any way strange. Plus, this particular process fits nicely with the age-old maternal exhortation to "shop around" before settling down. Our bachelorette is now strolling around the man supermarket, a one-stop shop stocked exclusively with Trista-approved merchandise.

You almost get the sense the network is trying to make it up to her. "We're hoping that you find the man of your dreams," host Chris Harrison assures her during an introductory heart-to-heart talk. "And to that end, we have selected 25 fantastic men with your specific tastes in mind. You're going to meet all kinds of guys. We have a couple of pilots, several firemen, a few pro athletes -- including a bull rider! -- and even a breast-implant salesman."

"Really?" Trista intones with a saucy smile. A breast-implant salesman! O brave new world that has such people in it!

The role-reversing concept of "The Bachelorette" had its share of detractors when it was first announced. But seeing Trista in the driver's seat (of a bumper car on a closed course, sure, but at least she gets to turn the steering wheel) it's impossible not to bask in her Fahrvergnügen. Unlike on "The Bachelor," in which two dozen self-centered beauties were removed from their natural habitats and placed in a holding tank with a bevy of other "popular girls," Trista is free to sit back, relax and bat her eyelashes. As an added bonus, this bachelorette gets to shed tears of pity and compassion -- not humiliation and despair -- as she ruthlessly eliminates her suitors for not measuring up to her ideal.

After watching the girls line up for the chance to win the hardened little heart nuggets of an Ivy League MBA, a banker and a would-be millionaire developer on "The Bachelor," "The Bachelor II" and "Who Wants to Marry a Multi-Millionaire?" it's nice to see a woman whose romantic dreams have remained unsullied by adulthood. As Fox has perversely and brilliantly set out to prove, meanwhile, those who look for love in televised places aren't looking, exactly, for love. On "Joe Millionaire," one girl will outclaw, outscratch, outbitch the competition for a chance at Evan Marriott, a $19,000-a-year construction worker and former underwear model who has been sold to the aspiring future dowagers as the hot heir to a $50 million fortune. Only after Evan has selected a mate will she be told the truth about his tax returns. Will love survive?

Trista's earnestness and apparent lack of guile actually add to the viewing experience. She likes firemen. They ride around in big red trucks. You might see why creator Mike Fleiss was, as he recently told Newsweek, "sort of dragging my feet on this one ... but the network wanted to silence some of our feminist critics, and rightfully so ... It's much better than I thought it was going to be." Actually, the new format seems to have restored television mating to the natural order of things -- the natural order being, of course, high school.

The WB's "High School Reunion" gets this, and gets that nothing forges future sexual hang-ups and romantic dysfunction like high school. "High School Reunion" takes a selection of classmates from Oak Park (Ill.) High School's class of 1992 and offers, in lieu of punch, streamers and thinly disguised pissing contests, two weeks of psychosexual torture in a mansion on scenic Maui.

"High School Reunion" is reminiscent of the first "Temptation Island," in which a paradisiacal setting provided the backdrop for extreme psychological torment. Each member of the class is identified by their high school persona, distilled to its barest, most visceral essence. Among them are the Popular Girl, the Player, the Bully, the Nerd, the Flirt and the Misfit. As you may have already surmised, the Nerd has nursed a 10-year crush on the Popular Girl, and the Tall Girl seems to have developed a borderline-psychotic fixation on the Player. In fact, Oak Park's Class of '92 seems to have had a particularly hard time letting go.

The Tall Girl, in particular, seems entirely convinced that the object of her obsession will propose to her before the second week is out. The potential for damage is higher than ever. And as we are learning, damage is what it's all about. For regular people (or, at least, for people as regular as reality-show participants can ever be), the hurt still seems to come as a surprise, as a recent spate of lawsuits filed against reality shows has demonstrated.

There are those among us, though, for whom humiliation is a way of life. And who speaks for the has-beens?

Well, the WB does. The show is called "The Surreal Life," and it gives people who will never reclaim their glory days (or day), and yet will never enjoy the comforts of anonymity again, the chance to move in together for an experiment in on-camera living.

What does it take to go on "The Surreal Life"? The first and most painful step is admitting you're a has-been. 1980s teen idol turned rehab habitué Corey Feldman, early '90s rap star turned laughingstock bankruptcy case MC Hammer, tragic child star turned tragic has-been child star Emmanuel Lewis, and Vince Neil from Mötley Crüe bunk together (literally, bunk -- there are bunk beds in three bedrooms for the seven inhabitants to share) in Glen Campbell's former residence, which is going for Warhol-cool, but ends up at Chuck E. Cheese. As the tag line goes, "When the rich and famous fall from sight, this is where they'll crash."

Perhaps the saddest member of the cast -- not quite famous-for-no-reason, but just missing tragic fallen icon status -- is former "Beverly Hills 90210" cast member Gabrielle Carteris, who admits rather sheepishly that not a lot of people remember she was on "90210" and mentions her husband and two kids no fewer than three times in the first five minutes. But compared to the has-beens, the never-weres have it easy. Sharing digs with Hammer, et al., are Jerri from "Survivor" and Playboy model-turned-"Baywatch" babe Brande Roderick. Hardly a vertiginous tumble between them.

The first episode, which premiered Sunday and was repeated Thursday night, is rife with heart-tugging moments. Feldman calls his fiancée to ask if she'll marry him on the show, to which she hesitantly agrees, and which the other inhabitants find troubling. Corey's emotional stability, which he vouches for repeatedly at the start of the show, is perhaps not the unshakable bedrock he claims it is.

In another scene, the guests are treated to a sushi dinner, attractively laid out on the body of a naked girl who must lie very still on a table. It's a rare surprising moment for any reality show. Three of the men -- Hammer, Lewis and Feldman -- leave the table in a huff. For reasons ranging from Christianity to vegetarianism to monogamy (Feldman will not eat sushi off the body of a naked girl unless his fiancée is present) the three wind up going inside and ordering a pizza. Gabrielle Carteris tucks in to the toro with gusto and a somewhat glazed expression.

What sets "The Surreal Life" apart from "The Real World" and "Big Brother," its spiritual precursors, is that the title doesn't describe the temporary living arrangement and contrived situation so much as it nails the inhabitants' entire post-fame existence. And it's something. The word I am searching for, I believe, is "bathos."