"Confessions of a Dangerous Mind"

Who knew George Clooney was this good? Sexy, rakish, sure, but nothing prepared us for his directing debut, this astonishing pic about zany Chuck Barris. 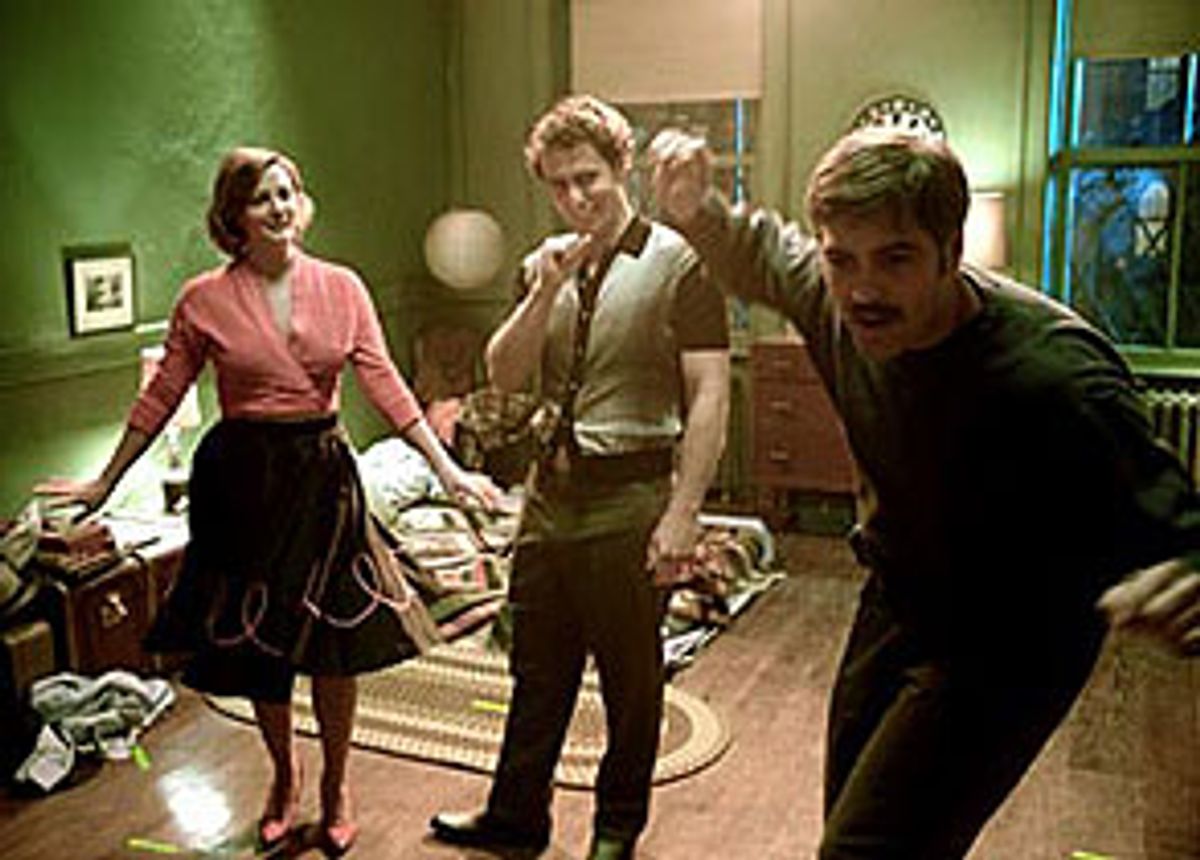 There was a movie released during the recent holiday season that effortlessly captures both the pop-culture effervescence and the creeping paranoia of America in the 1960s and '70s. It's a funny, strange, sad and wonderful picture, packed with delightful performances by Hollywood stars and made by a director with a startling facility for the form and an expansive cinematic imagination. At first it might seem like nothing more than a lightweight illusion -- a compendium of wacky period humor, leggy girls and bright colors -- but the longer you stick with it the more it seems like an exploration of the American soul in all its optimistic, romantic, damaged and deluded variety.

This extraordinary movie is a biography of a socially marginal hustler, haunted by his childhood, who's most likely a nut-job of the highest order. But it's definitely not Steven Spielberg's "Catch Me If You Can" (a tepid, exhausted film that's no fun after its great opening credits). Instead, the American film of the season -- and maybe of the year, or the last couple of years -- is "Confessions of a Dangerous Mind," the fanciful biopic about quasi-legendary game-show impresario Chuck Barris, which marks the directing debut of George Clooney.

I'll admit it: I'm flabbergasted. Astonished. I've always enjoyed watching Clooney's performances: He's got an all-time great movie face and in his relaxed, sexy and faintly self-mocking way he's quite an accomplished actor. But nothing in Clooney's post-feminist Dean Martin public persona prepared me for the idea that he'd be this good as a director. I went into "Confessions of a Dangerous Mind" basically expecting low-key goofballing: Clooney and "Adaptation" screenwriter Charlie Kaufman (with Steven Soderbergh peeking over their shoulders) making medium-camp hay out of Barris' outrageous claims that he produced "The Dating Game" and "The Gong Show" while also working as a CIA assassin in Latin America and Eastern Europe.

What emerges, though, is something much weirder and richer than that: a heartbreaking love story, a Horatio Alger tale of bootstrap success, a Greek drama on cocaine. I do not, however, mean weird in the self-conscious, self-referential manner of Kaufman's more celebrated screenplays for "Adaptation" and "Being John Malkovich." Those of you with advanced allergies to Kaufman's approach, in fact, owe it to yourselves to see this. Confronted with a story and a character that could trump any amount of meta-lunacy Kaufman might devise, he tells it reasonably straight and in so doing lays bare the profound sense of sadness, even tragedy, that's at the heart of his work to date.

In Clooney and Kaufman's handling of the tale -- adapted from Barris' own tell-all-and-then-some memoir -- Barris (played by Sam Rockwell, in a career-shaping performance) is a relatively ordinary Jewish kid from Philadelphia, driven by "inarticulate rage" and the "quest for pussy," who becomes a half-reluctant Prometheus of the television age. Barris was the guy who realized that game shows and talent shows hadn't come anywhere near the lowest common denominator yet, and that the public's appetite for salaciousness and humiliation remained relatively unslaked. Among other things, he was the undisputed granddaddy to the schlock TV of "Star Search" and "American Idol." But beneath all his ambition and bluster, Barris was too much a self-reflective intellectual to handle being repeatedly excoriated by the high-culture chattering classes as the man who destroyed television. (This observation comes from Dick Clark, in one of several real-person interviews that appear as sort of narrative parentheses in the film.)

Barris' fantasies about being a freelance CIA agent (his "control" is a mustachioed Clooney, in a series of impressively tailored outfits) are so overblown and ridiculous that they don't even seem pathetic. They're just about as linked to reality as the strikingly similar delusions suffered by mathematician John Nash in "A Beautiful Mind"; in both cases you've got some combination of organic mental illness and a powerful, tormented mind feeding on uncontrolled guilt and shame.

More than anything else, the Barris of this movie is guilty about his repeated betrayals of Penny (Drew Barrymore), the one woman in his delusional vortex of international espionage and ukulele versions of "If I Had a Hammer" who actually sticks around. Barrymore is so doggone adorable that her acting chops don't show much, but Penny is absolutely convincing as a gal who plays free-love flake when the times demand but is actually solid as a rock and, against her better judgment, deeply in love. Anybody who was mean to her would want to come up with a really good excuse, like personally keeping Communism in the Third World under control. And it's tempting, frankly, to believe Barris' outlandish stories, or at least to believe in a world where such things might happen. (If you pay attention, you'll catch Barris' alternate-universe theory of the JFK assassination.)

Whatever aid Clooney may have gotten from his frequent collaborator Soderbergh (an executive producer here) and from cinematographer Newton Thomas Sigel (of "X-Men" and "Three Kings," among many others), there's a deceptively light touch at work in "Confessions of a Dangerous Mind" that's highly individual. Visually, he captures little things (the uniquely claustrophobic feeling of an early-'60s poverty apartment; his own character's expensive penny loafers grazing the surface of Barris' backyard pool) as well as bigger ones, like the showpiece montage sequence in which the lovers, murders and exotic locations of Barris' life begin to melt into each other, all set to a marvelous "Gong Show" Elvis-impersonator version of "I Can't Help Falling in Love With You."

Rockwell, one of those fine Hollywood actors who's made a career out of supporting roles, looks as if he might be the love child of Jim Carrey and Gary Oldman. Actors aren't always good at directing each other, but Clooney never allows Rockwell to take up too much space. That's a lot to ask, considering that Barris has to entertain millions alongside the Unknown Comic and Gene Gene the Dancing Machine, in between whacking Soviet agents in East Berlin and late-night face-sucking sessions in Helsinki with a sultry superspy played with brio by Julia Roberts (who makes the most of the line, "Leave the microfilm in, baby").

"Confessions of a Dangerous Mind" is certainly full of laughs, many of them provided by Barris' inimitable television oeuvre. (Female contestant to Bachelor No. 1, on an early version of "The Dating Game" deemed too hot for ABC: "I play the trombone. If I blew you, what would you sound like?" There's also a gem from the "Newlywed Game" archives I won't spoil.) But considering that this is a movie about Chuck Barris, there's never even a hint of freak-show condescension, nor of the heavy-handed moralizing a director like Soderbergh might have brought to the subject. From its giddy comedy through its James Bond adventures to its shattering conclusion, "Confessions of a Dangerous Mind" treats this Gatsby of American trash with the same dignity and compassion and contempt he allows himself.