NBC's drug-lord miniseries "Kingpin" isn't really a crude Latino rip-off of "The Sopranos," say its creators, it's ... Shakespearean! Plus: "Dragnet" -- it's about a cop. 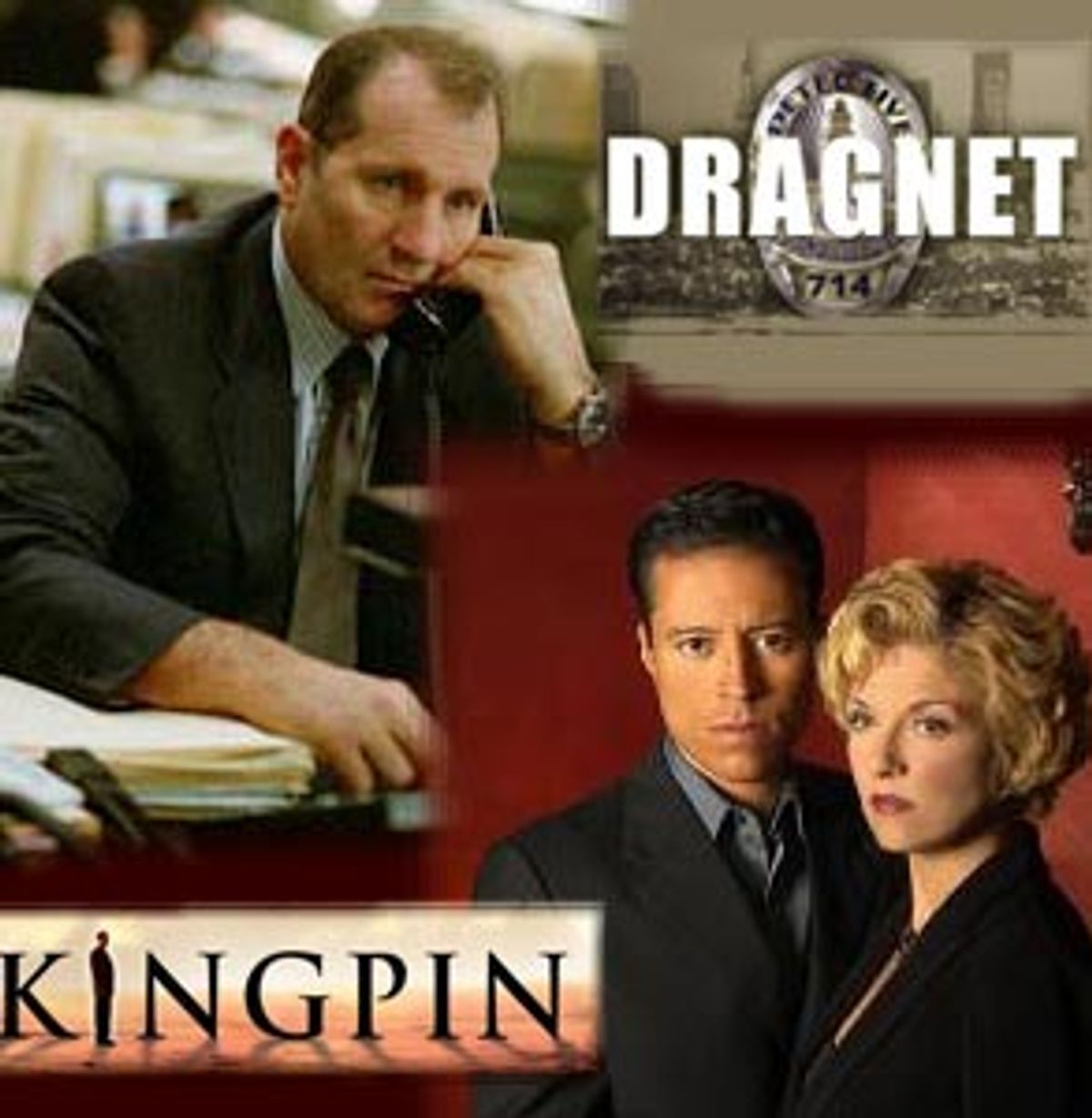 Imitation is the sincerest form of flattery, unless the copycat has mixed feelings about the cat, in which case it can also be fairly handy as an embarrassing mistake. "Kingpin," NBC's new six-episode miniseries about a drug cartel-running Mexican family, which debuted last night, is neither an homage nor a mockery, but that most dispiriting of all blatant rip-offs -- the blatant rip-off that doesn't get it. "Kingpin" borrows so heavily from recent and classic crime-family films that you wonder how it will ever pay them back. Nevertheless, it's clear that the inspiration behind this story of a morally conflicted drug trafficker told from the morally conflicted drug trafficker's point of view comes from one show and one show only. Capiche?

Packed with as much sex and violence as standards and practices will allow, "Kingpin" was still a glimmer in NBC's eye two years ago, when chairman and CEO Bob Wright wrote that well-publicized bash-slash-mash note to executives, studio heads and producers. His missive was accompanied by a tape of a particularly violent episode of "The Sopranos," which he denounced as something "we could not and would not air on NBC because of the violence, language, and nudity," while at the same time urging his people to come up with a critically acclaimed scourge and highly rated menace of their own as soon as humanly possible. So here it is. "Kingpin" is what you get when you suck the soul (and the fat) from "The Sopranos," throw in some movie references and crudely stitch it all together: Aaron Spelling's "The Godfather IV: Stuck in Traffic."

In an attempt to discourage unflattering comparisons, both creator David Mills and NBC entertainment president Jeff Zucker have been diligently working the "Macbeth" angle in the press lately, wisely trying to draw comparisons to productions most viewers are unlikely to have seen. (Zucker told TV critics last month: "Where some see 'The Sopranos,' I see Shakespeare.") But they really needn't bother. If it weren't for the fact that there are lots of drugs lying around and idealistic DEA agents getting shot, you'd never know anything all that fishy was up.

The kingpin of the title is a suave Mexican drug lord named Miguel (Yancey Arias), the Cadenas family's answer to Michael Corleone. (Just to prove it, he has the same name, a similar hairstyle and a WASPy, well-educated American wife.) A slick Stanford-educated MBA, Miguel yearns to run the business like a corporation (though maybe yearns is too strong a word; Arias' taut, chiseled face registers only the tiniest of emotions, which are known to cause wrinkles).

Given the way corporations are run these days, Miguel's dream seems comfortably within reach. His power-hungry American wife, Marlene (Sheryl Lee), is the perfect horny helpmeet. They share approximately half a scruple between them, but Marlene lets Miguel hold it. The problem is that, while Miguel bribes judges and makes charitable donations like a legitimate businessman, his Tio Jorge becomes an opium addict and puts his crazy son Ernesto (who appears to reside in the Versace flagship store) in charge. Ernesto feeds a DEA agent to his pet tiger, Marlene becomes sexually aroused when Miguel orders his uncle killed and some jealous voodoo cousins start infiltrating their son's dreams and experimenting with magic spells that are supposed to make people immune to bullets, but don't. ¡Ay, Lucy! ¡Que familia!

Oddly, Miguel glides through the wackiness and the bloodshed without ever messing up his hair, but his general air of distraction, and his guilt about not joining his son in a game of backgammon, hint at some emotional discomfort somewhere -- or maybe there's a piece of gravel in his shoe. Given the couple's utter lack of affect, it's not surprising that Zucker recently described the dramatic conflict of "Kingpin" as "far closer to the conflict and internal guilt that a Hamlet or Macbeth feels."

Of course, internal conflict is a lot more interesting when paired with brooding soliloquies than with facial near-paralysis. Aside from occasionally losing his temper (say, when crazy cousin Ernesto shows up at his house with a dead DEA agent in the truck), Miguel seems about as conflicted as a buttered turnip. Marlene, too, is fine, thanks. They are so fine with everything, in fact, that they don't appear to have bothered to come up with any sort of "waste management"-type lie to tell the kid, who, young as he is, is probably going to start asking where daddy got the private jet with the hot stewardess any day now.

Obviously, "Kingpin" exists in a more rarefied world than "The Sopranos," but it would still be nice if the family could display a few recognizable human characteristics. Also nice would be any sort of insight on what it's like -- you know, emotionally, psychologically, socially, whatever -- to be a big drug lord. Isn't it a stressful job? (Then again, Tio Jorge describes it by saying, "I have seen the flames of hell! I have swum through rivers of blood!" so maybe we don't want to know.) Still, when you think about how much sleep Tony Soprano has lost over some stolen fiber-optics cable, and then compare it to Miguel Cadenas' discreet wince as he watches his cousin feed a federal leg to his cat, it's hard not to wonder what his secret is.

How does Miguel manage to look as vacant and pretty as a male underwear model while his relatives run around declaring war on the United States government? How does Marlene manage to stay so focused and calm? Does she visualize FBI agents in kilts? And just how do Miguel and Marlene, who display no chemistry, remain so blissfully free of conjugal issues? It may be because Arias is about as expressive as a tuning fork, and may be because Lee has what has to be the most confounding, bizarre and ridiculous role in recent television history. She is at once a steely Lady Macbeth (50 bucks says there's a vigorous hand-washing scene coming up soon) and a perennial newlywed who has apparently never moved beyond the honeymoon stage with her attractive but emotionally distant husband.

Which must be tough because the entire family openly hates her for being American, which would be ludicrous even if she weren't their attorney and they were in a different line of work. You'd think a crime family would know better than to alienate their lawyer. But then again nothing about this particular family rings true. Hispanic media watchdog groups worried about "Kingpin" portraying Latinos as murderers and drug-pushers; now it's clear they should have worried about being portrayed as laughably one-dimensional plot-pushers, albeit ones with nice, Pilates-toned abs.

"Dragnet" is the old-but-new procedural crime drama from Dick Wolf, a man who has given us more procedural crime dramas than Nebraska has crimes. "Dragnet," as most everybody knows, is a remake of the classic TV detective drama in which Sgt. Joe Friday rids Los Angeles of human vermin while tossing off zingy, deadpan, mordant and often strangely disjointed observations in voice-over. Like this one, after he is called to investigate a noise complaint that turns out to be coyotes making a ruckus in broad daylight for no apparent reason:

"We smelled the reason before we could see it. A white Jane Doe decomposing. My name's Friday. I'm a cop."

"Dragnet," which premiered last night on ABC, opposite "Kingpin," is refreshingly retro, if, that is, you are refreshed by musty smells. The old theme song returns as an extended dance remix, and each episode ends with a mug shot and a coda. In between the song and the sentencing, Joe Friday (Ed O'Neill of "Married With Children") and his young partner, Frank Smith (Ethan Embry), solve crimes by faithfully following clues the old-fashioned way.

At first, a lot of things seem funny: O'Neill's face, the fact that everyone enunciates pretty clearly, the fact that an autopsy scene in the first episode plays like one of those drinking games where everyone has to do a shot every time someone says "vagina," "anus" or "semen" and everyone winds up drunk.

Then, after a while, everything still seems funny, but it isn't as clear whether it's intentional. Like the part where a serial killer kills two prostitutes and a woman who isn't a prostitute, and Frank asks Friday whether he sees a connection between the three "vics," and Friday replies: "Between [the two prostitutes], no doubt. With the woman in the car, no, I don't see a connection."

Anyway, it all gets less funny as it goes along, while becoming more oddly comforting, because it is, after all, so retro, and retro is all about certainty and a clear distinction between right and wrong and good and bad. For a show full of rape, murder and larvae, it's reassuring, sort of. Like when Friday goes to the house of one suspected killer, and he meets with a smart psychologist and says: "I read some stuff you wrote on criminal disassociative behavior when you were with the FBI. Pretty impressive stuff."

And she smiles and thanks him, and then his boss says, "Take a look, satanic iconography, deviant pornography ... It's the right fit."

Just in case you had any doubts, a young policewoman walks out of the room with whips, chains, restraints and handcuffs, and someone suggests, "You might want to get those to the lab, ASAP."

And when it turns out that this guy, though he did kill someone, was not the guy they were after, they find the right guy, anyway -- and he turns out to fit a profile, too! To the letter! And then Friday predicts he will get the death sentence, and the murderer disagrees but in the end he does. And it's really nice to know, in this uncertain world, that for at least one hour out of the week you can park yourself in front of the TV and know exactly what's going to happen next.