In morally evaluating the U.S. assault on Iraq, hawks and doves alike must consider not only the Iraqi girl torn apart by an errant shell fragment, but the grandmother greeting American soldiers with tears of joy. 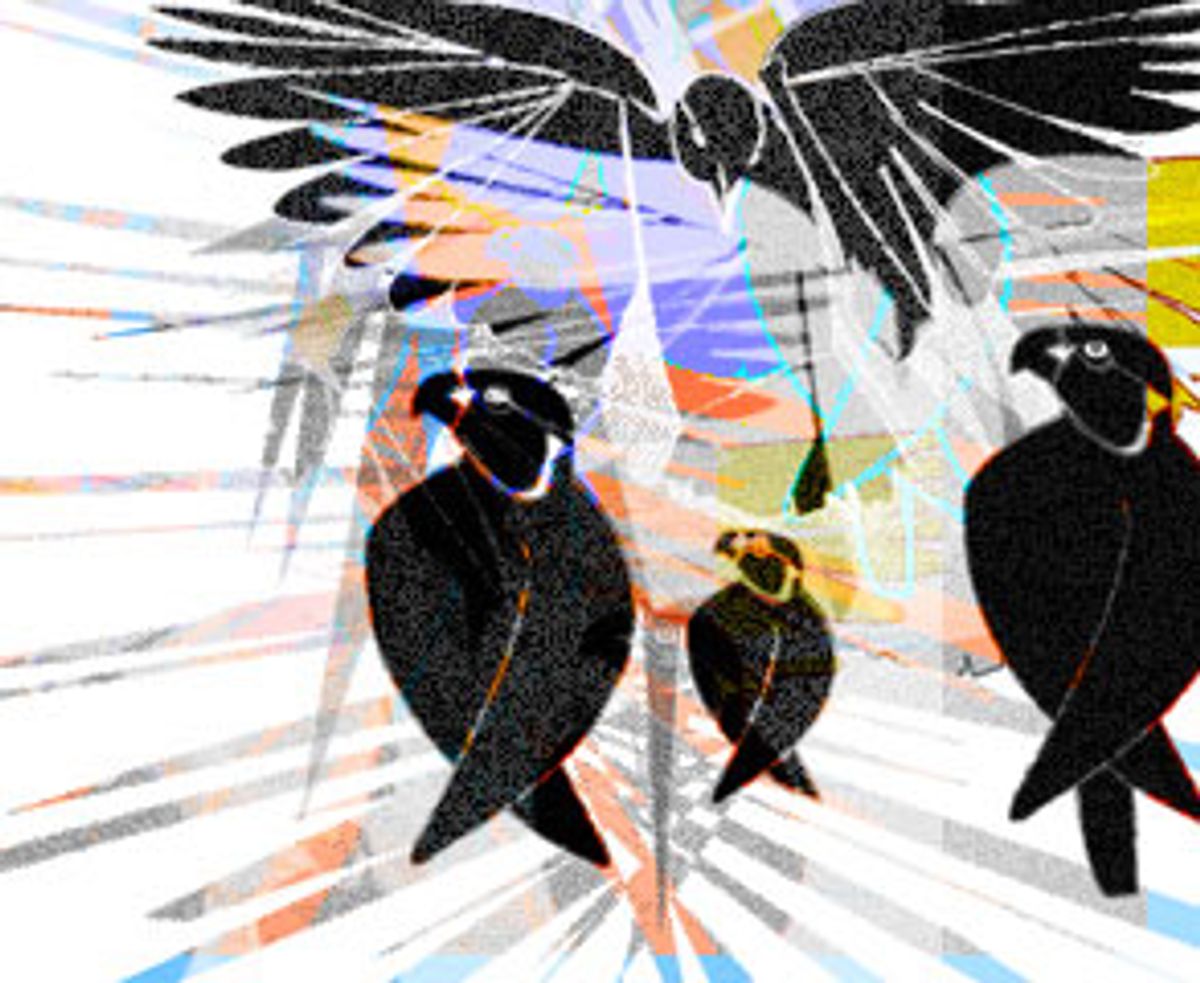 War, they say, changes everything. And the moral ambiguities that have quietly shadowed America's long-planned attack on Iraq became pointed and inescapable as the conflict finally lit up the Baghdad sky this week. Literally minute to minute, both supporters and opponents of this war must now confront some painful truths, ones that challenge their most cherished convictions.

At around 9 p.m. Baghdad time, the capital began selectively exploding. On the little screen, as CNN announced the start of Operation "Shock and Awe," huge explosions could be heard, followed by massive, opaque columns of white smoke, like mini-mushroom clouds blossoming randomly. Al-Jazeera's camera neutrally recorded the familiar banal immobility of a big city at night: The streets of Baghdad were deserted, except for an occasional car speeding along. One imagined the driver painfully aware of the thin veneer of metal and fabric over his head, useless against huge fragments of metal roaring down silently from the sky. The buildings waited obediently. I found myself choosing one to look at. Would the roulette ball stop on this slot, or skitter on one more? The anchors chattered on. Then another building went up in a shattering roar, another blooming fireball, another gorgeous fireworks display.

A few minutes later, reporter May Ying Welsh said that although the buildings destroyed by the bombs were military or state structures, people lived next to them in residential neighborhoods. She said there had been 37 casualties on Thursday night and wasn't sure how many more this far bigger bombardment would produce.

Watching the pretty mushroom clouds on the TV, I found myself thinking again about two young residents of Baghdad Salon correspondent Ferry Biedermann wrote about, 20-year-old Walid Ibrahim and his 14-year-old sister Mariam. Walid was a computer nerd who wears braces: He told Salon that he likes the great movies they show during the Eid holiday and always stays home to watch them. His little sister liked Britney Spears and said she should come to Baghdad as a peace envoy.

I don't know whether it was the fact that Walid loved computers, which reminded me of my teenaged stepson, or that Mariam loved Britney Spears, like my loud-voiced 6-year-old daughter. But for some reason, in my mind this brother and sister became my children. You cannot imagine everything, or everybody: the lives and deaths of 24 million people are inconceivable. You have to choose. So this war, for me, is all about Walid and Mariam, a nerdy young man and his friendly sister who are living in a city upon which my nation is now raining bombs. I want him to be able to watch "White Heat" on TV. I want her to be able to dance to bad American pop music in her room. I do not want an explosion caused by a bomb with my name on it to tear through their house and rip their bodies apart as they cower under their beds.

If they are spared that fate, even if a thousand other children throughout Iraq are not, maybe the liberation of the Iraqi people from Saddam's tyranny will be worth it. Assuming, that is, we don't abandon them to an equally bad fate after the war. Assuming that we don't use our omnipotent, freshly blooded sword to attack other nations we fear and despise. Assuming that our running roughshod over the U.N. won't tilt the world towards lawlessness and permanent hatred of America. And assuming bombing Baghdad doesn't recruit a whole new crop of al-Qaida terrorists.

Defense Secretary Rumsfeld went to great lengths to defend the "humane" nature of the bombing at his Friday press conference following the opening salvo of the Shock and Awe campaign. Each target was carefully chosen, he said, and precision weapons ensured extraordinary accuracy. The campaign bore no resemblance to the indiscriminate bombing in World War II. America was doing everything in its power to minimize civilian casualties.

Rumsfeld is right: This is not Dresden. But despite the precision, of course there will be civilian casualties. In those ministries and official buildings that are disappearing beneath those billowing clouds, the final act in a process that started months ago with military analysts and lawyers poring over maps of Baghdad and concluded when an officer on a frigate in the Persian Gulf pushed a button and launched a Tomahawk missile, there are janitors and night watchmen who have just been incinerated. There are families living nearby who have been crushed to death. And far worse things may have taken place -- like the errant U.S. bomb that hit the Amiriyeh civilian air-raid shelter in the first Gulf War, killing 400 men, women and children.

So far this war, including the aerial bombardment of Baghdad, does seem to have been conducted in such a way as to minimize civilian casualties. The attempt to kill Saddam and his inner circle in one bold stroke set the course: Had it proved immediately successful (the results are still vague and the subject of debate), and resistance immediately ceased, this would have been the first full-scale war in history in which the only casualties were the enemy's leaders.

That would have been the best possible outcome of this war. The peculiar thing about watching 2,000-pound bombs hit buildings in Baghdad is knowing that in this war we have no enemy. (More precisely, no enemy except Saddam, his immediate circle, and the most loyal among his elite guard.) Under these circumstances, every innocent Iraqi death is not just a tragedy, it is a weight placed on the scale we must use to judge the justice of this war.

And it isn't just civilians. The regular army conscripts, many of them poor peasants or uneducated city dwellers hauled off to be used as cannon fodder by Saddam's brutal regime, are also innocent. The New York Times ran a powerful half-page spread showing 12 American soldiers in full battle gear on the front page of their Friday "A Nation at War" section: it was impossible to look at their faces, oddly innocent, without rancor or machismo, and not be moved by the kind of deep-dish American fellow-feeling you get when cheering on your countrymen at the Olympics. But if the paper was to run the same spread showing regular Iraqi troops, the faces would elicit the same emotions -- again, as at the Olympics. There are no good guys or bad guys here, except for Saddam's agents.

This is the difficult moral truth that must accompany the facile refrain that we must "support our troops." Yes, of course we must, but we must also support their troops -- and even more, their civilians -- because by our own avowed definition of our mission, they are not the enemy. If we kill them -- and kill some or many of them we must and will -- we are killing the very people we came to liberate.

So the hawks cannot rest easy in the moral virtue of their chosen war. Many Iraqi troops are surrendering. But some units are fighting and might continue to until they are obliterated, not for Saddam, but for honor or national pride. And if there is a street battle in Baghdad and it turns into a bloodbath, we might end up destroying much of the capital in order to save it -- along with much of the goodwill of the Iraqi people that we will need to help rebuild their country.

But the doves cannot rest easy, either. Hundreds of thousands of people around the world, enraged by the broadcasts of Baghdad in flames, have taken to the streets to protest. But though it is easy to mock Rumsfeld's claims that dropping enormous bombs on a city of 5 million people is "humane," in fact it is still possible that the strategy will work, that this war will come to an abrupt end, that Saddam's regime is a house of cards and a few carefully chosen Tomahawk missile strikes will cause it to collapse with minimal loss of life.

In which case, those who have opposed this war because they feared significant Iraqi casualties will be forced to admit that their fears were not borne out.

And then there is the liberation of the Iraqi town of Safwan, memorably described by New York Times reporter Dexter Filkins. "As hundreds of coalition troops swept in here just after dawn, the heartache of a town that has felt the hardest edges of Saddam Hussein's rule seemed to burst forth, with villagers running into the streets to celebrate in a kind of grim ecstasy, laughing and weeping in long guttural cries," Filkins wrote. "'Oooooo peace be upon you peace be upon you peace you oooooo,' cried Zahra Khafi, a 68-year-old mother of five, to a group of American and British visitors who came to the town shortly after Mr. Hussein's army had appeared to melt away. 'I'm not afraid of Saddam anymore.'"

I believe this war is unwarranted and dangerous for America. I believe it could push our economy into crisis. I believe it could paint our country into a dangerously lonely corner. I believe Saddam could have been contained. I am far from convinced that America is truly committed to developing the country and the region. But liberation is liberation, even if George W. Bush and a cadre of profoundly untrustworthy advisors are doing the liberating. It is not the Iraqi people's business if Americans end up paying for freeing them with the hatred of the rest of the world, and more terror attacks. That has not yet happened, and might not happen. In war, what matters is only what happens -- whether it is an Iraqi schoolgirl being killed by an American bomb, or an old woman weeping with joy as American soldiers liberate her from a loathsome regime. The danger for hawks and doves alike is the tendency to fail to actually see what is happening, to look at everything through the dark glass of ideology.

Some on the left discount or even resent the Iraqi people's liberation because they believe it will give Bush a free imperialist hand elsewhere. That is a real fear. But right now, an old woman is happy. That is important. There is no dissonance in opposing this war, and at the same time celebrating as American troops give candy bars to Iraqi kids.

As the bombs fall, as unknown janitors die and women run into the street to greet G.I.s, we are watching the unfolding of a moral fable whose end we do not yet know. This may be the most confusing thing of all to accept: The ultimate justice of this war might be determined merely by fate, not by any higher principle. By choosing to go to war, we have turned ourselves into gods -- but gods of a world we do not control.