An organization that pays drug-addicted women to get sterilized is increasingly getting referrals from publicly funded agencies. Its supporters say it's saving babies from being born into hellish lives. Its critics say it's practicing "Hitleresque eugenics." 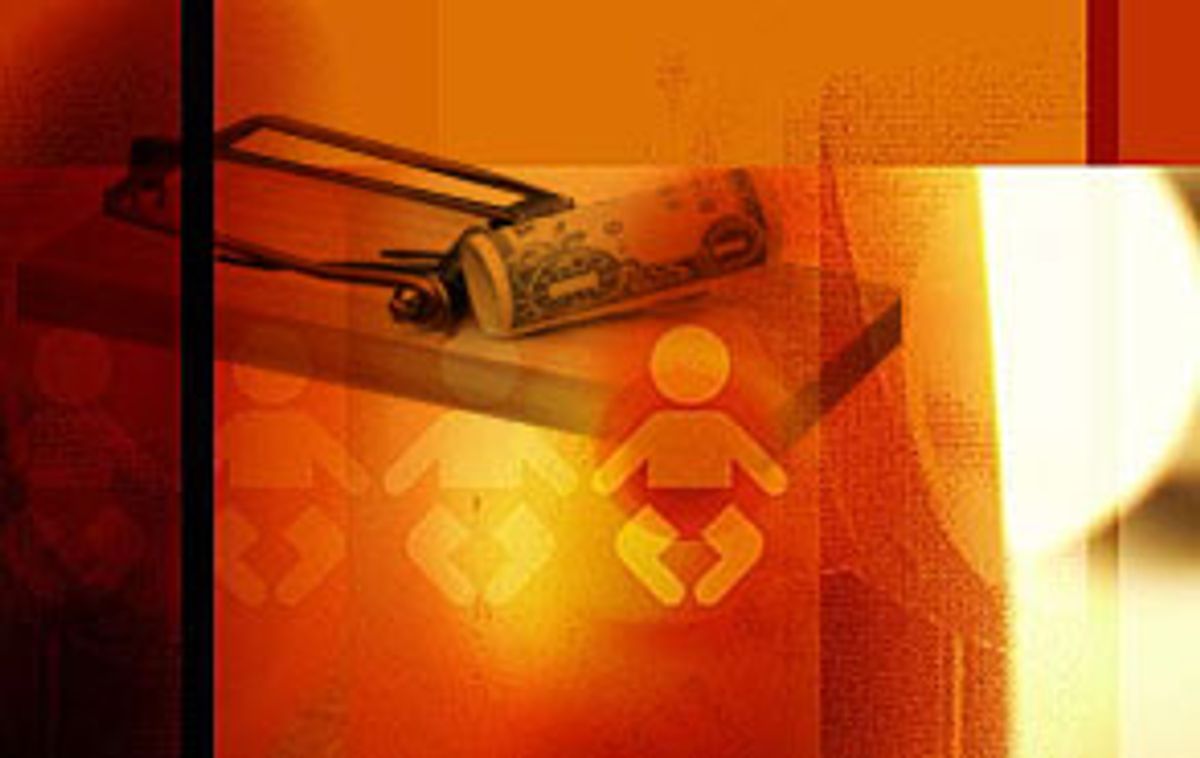 Cathy Mayne was devastated when she heard that her 27-year-old daughter, Nicole, would be having another baby. In fact, she prayed it would be Nicole's last.

That's because Mayne, a 48-year-old former data entry clerk from Anaheim, Calif., already had custody of Nicole's first three children, all of whom suffer from medical and developmental problems caused by their mother's prenatal drug use. A chronic heroin and methamphetamine addict who lives on the street, Nicole had her first child at 17, has gotten pregnant by four different men, and has never had enough money to regularly use birth control. It seemed to Mayne like a "bad cycle that could go on forever."

But thanks to a controversial program called CRACK (Children Requiring a Caring Kommunity), which pays drug addicts to get sterilized or to use long-term birth control, that cycle has finally ended.

After Cathy Mayne saw a flyer near her grandson's elementary school that read, "If you're addicted to drugs, get birth control -- get cash!" she called CRACK on Nicole's behalf. The organization's premise is radical, if dizzyingly simple: CRACK gives addicts $200 (they'll throw in an extra $50 if a participant recommends a friend) and sets up the medical procedures at a public hospital or clinic. All Nicole had to do was sign a release form, and two weeks later she had her tubes tied at a local hospital. She received a check the following month.

CRACK's solution to the ever growing number of babies born to drug addicts is catching on. Although it began just five years ago as a small grassroots organization based out of a crowded home office in Orange County, it now has branches across the country.

What's more, the group is increasingly getting referrals from unlikely and controversial sources: publicly funded jails, probation centers, drug treatment centers and even hospitals. Addicts who are directed to CRACK by public employees now account for a quarter of the program's participants.

One new supporter is the Bernalillo County Detention Center in Albuquerque, N.M., which last summer began hosting biweekly CRACK presentations for inmates. The local CRACK representative, Yvonne Smith, says she talks to prisoners about birth control options; discusses the stress and costs of having too many children while addicted to drugs; and recounts stories of addicts who say they are happy they've gone through the program. Smith says that half a dozen women who have attended these sessions have been sterilized.

A spokesman for the Bernalillo jail, Capt. John Van Sickler, says that CRACK is just one of a dozen groups that frequently hold information sessions at the prison. He says the jail does not recommend people to CRACK, and that officials don't believe they are endorsing a group's services just because they host the meetings.

"We don't take a position on what they are doing one way or the other," he says. "It's no different than giving people information about A.A. or passing out materials from a local church. We are just providing [inmates] with information."

Barbara Harris, CRACK 's director, says she began the project five years ago after seeing dozens of babies born to drug-addled mothers who couldn't care for them. Harris adopted four children of her own from the same crack-addicted mother who kept having babies year after year "without a care in the world," she says.

The organization grew slowly. At first, Harris worked from home and got friends to help her post flyers all over Los Angeles. (One read: "Don't let getting pregnant get in the way of your drug habit.") She spent her own money and used $400 donated from a local lawyer to pay CRACK 's first two clients. Volunteers were mostly other foster parents who heard about what she was doing and wanted to help out.

Five years later, CRACK has three full-time staffers, hundreds of volunteers, and branches in 28 cities, from Washington to Reno, Nev. Its annual budget is $286,000, and the group has raised nearly $2 million from average citizens who send in small checks as well as from high-profile businesspeople and well-known philanthropists who each donate thousands of dollars. A few years ago, Dr. Laura Schlessinger contributed $5,000.

Not surprisingly, CRACK 's unconventional drug reform approach, and its increasing support from publicly funded organizations, has attracted legions of critics. Many, like the National Advocates for Pregnant Women (NAPW), have organized media and letter-writing campaigns to force publicly funded jails and treatment centers to stop referring addicts to CRACK. "It's an outrage that public agencies are spending public dollars to recommend people to a coercive group like CRACK," says Lynn Paltrow, executive director of NAPW. "Yes, the public health system is flawed. But there has to be a better way of helping these women than by giving them cash to be sterilized."

Other critics, such as Planned Parenthood and the ACLU, argue that CRACK preys on minorities and the drug-addicted poor who often live rock to rock and probably use the cash for just another fix. They argue that public money should be funneled toward a larger and more deleterious problem facing addicts -- the dearth of affordable drug treatment programs.

Indeed, Medicaid rarely pays for pregnant women to attend inpatient drug treatment programs, and even outpatient resources are hard to come by. Making matters worse, the National Association of Alcoholism and Drug Abuse Counselors says that states, which cough up the lion's share of drug treatment and prevention money in the United States, have cut treatment money by as much as 30 percent in the last two years.

"Poor women have fewer and fewer options to help them deal with their substance abuse dependencies," says Gwen Rubenstein, director of policy research for the Legal Action Center, a public interest firm in Washington, which represents individuals with drug and alcohol problems. For this reason, Rubenstein believes that CRACK 's money would be better spent developing viable treatment options for the women they serve. Harris has a simple response to that suggestion: "That's not what we do."

The NAPW's Paltrow, whose voice sometimes strains to contain anger while discussing CRACK, compares the group's cash-for-birth-control concept to "Hitleresque eugenics." She argues that historically, many privately funded efforts that purported to help disenfranchised groups eventually revealed other motives. "It's hard not to think that some of the people who support this just think it's a good way to get those they don't like to stop reproducing," she says.

Harris says that the claim that she and others involved with CRACK are practicing social engineering is ludicrous. "We are not picking on the poor," she says. "We're just helping people who need our help but have nowhere else to go." She pauses and then adds: "Paltrow should adopt some of these children and then try and criticize me." Harris, who is white, also points out that her husband is black, as are the four children she adopted. "I know what a racist is and I am not a racist. My father disowned me when I married my husband. We have been denied apartments because he is black and my children are biracial. People should know what they are taking about before they call me a racist."

Last year, Patricia McBride, a 41-year-old mother of seven who lost custody of her children because of her drug and alcohol addiction, applied to CRACK to receive Depo-Provera, a bimonthly contraceptive shot. As long as she continues to take it, she'll receive $200 a year (as opposed to the one-time payment for sterilization). McBride, who is living in Baltimore in her sister's apartment, says she doesn't regret having her children, but adds, "I wish I had waited until I stopped using the drugs and drinking to have them." McBride's children are in four different foster homes. Even though she's been through rehab and says she's clean, her efforts to regain custody have failed.

CRACK's offer to pay for contraception doesn't extend just to women. Paris and Shawn Mitchell, 23- and 29-year-old brothers from Lamarque, Texas, both had vasectomies paid for by CRACK last year. Both used drugs for years and have five children between them. The brothers now say they are clean, working, and attending as many as three A.A. meetings a week. "This is a great option for someone who needs to strap down and get their life back in order," says Paris, who is one of two dozen men who have been sterilized through the program.

So far, 907 people have signed on with CRACK. Of those, 329 were permanently sterilized and the rest opted for long-term birth control like Norplant or Depo-Provera. Despite critics' assertions, the majority of participants have not been racial minorities, although there is a greater percentage of minorities than in the general population: 463 have been white, 392 black, and 52 nonwhite Hispanic.

A recent CRACK survey shows that before entering the program, the group as a whole accounted for more than 4,000 pregnancies: 3,003 children; 1,342 abortions; 189 stillborn babies; and 1,603 children living in foster care. "People can criticize us all they want, but there is nothing good about women having six or eight babies taken away from them," says Harris.

Not surprisingly, the controversy surrounding CRACK has only brought the group more publicity -- and more money -- even in the currently depressed economy. One major supporter, Loreen Arbus, the president of Arbus Productions, a Los Angeles production company, and daughter of ABC founder Leonard Goldenson, donated $100,000 two years ago and also held a fundraising party at her home around the same time that raised an additional $50,000 for CRACK.

Arbus says she couldn't disagree more with critics who say the program, and even supporters like her, are racist or coercive. "No one who signs up does so for any other reason than they want to," she insists.

Despite its provocative premise, people like Cathy Mayne remain deeply committed to the organization. Mayne hands out flyers in church and at the grocery store and recently had the family's Chevy Metro specially wrapped in CRACK ads, with the group's slogans and toll-free number plastered on the hood. She now refers to the car as the "CRACKmobile."

"CRACK was a godsend for our family." Mayne says. "People shouldn't bring children in this world if they can't take care of them."

Daniel Costello, a former staff reporter at the Wall Street Journal, is a freelance journalist and documentarian based in Los Angeles.