Parker Posey calls from Starbucks to talk about "A Mighty Wind" and her hipster career as low-impact movie star. But don't call her the Queen of Indies. 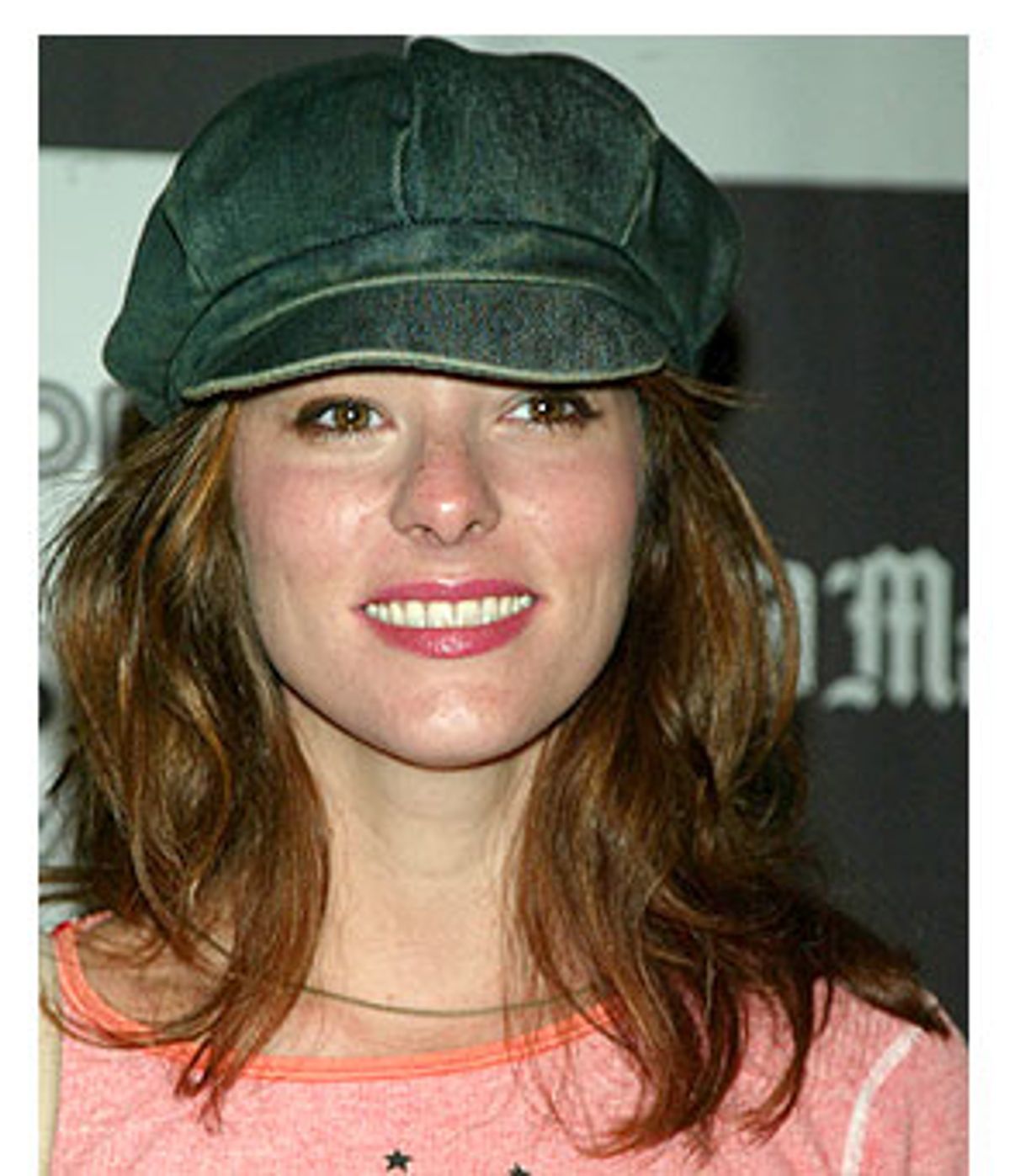 Rebecca Miller's debut feature, last November's "Personal Velocity," came off as a high-rent version of the glowy, woman-friendly teledramas that buttress the Lifetime Network. Composed of three distinct vignettes, the film is worth seeing only for the performance of Parker Posey, who portrays a Manolo Blahnik-shod book editor in the film's most fully realized segment.

Married to an exceedingly nice fact-checker who's been laboring for years on a bloated dissertation, Greta comes to realize that she's "rotten with ambition," both personally and professionally. And so her eye starts to wander.

At one point, she gets coquettish with a cutie in a coffee shop, tossing off a meaning-laden "Bye" on her way out the door. Posey infuses the casual farewell with plenty of flirty possibility, revealing once again that she's capable of doing more with one syllable than most actors are with spotlight-focused soliloquies.

The Mississippi-bred actress, named after '50s-era cover girl Suzy Parker, snagged her first big break back in 1991 as the odious Tess Shelby on the soap opera "As the World Turns." But it was her brief turn as authoritarian cheerleader Darla Marks in Richard Linklater's "Dazed and Confused" that won Posey critical notice -- and established her as a supremely watchable screen presence.

Since then, Posey has zinged barbs in more than 40 films, including "Clockwatchers," "The Daytrippers" and "The House of Yes," in which her performance as a batty Jackie-O worshipper earned the Special Jury Prize at the Sundance Film Festival. Though few have honed the art of cinematic sarcasm quite as adeptly as Posey, she always conveys far more than just snark and sass. Indeed, her performances in films like Hal Hartley's "Henry Fool" have revealed Posey's dramatic depth, her ability to invest virtually any role with nuance and complexity.

But what has proven most revelatory about Posey's career in recent years has been her work in the Christopher Guest mockumentaries. In "Waiting for Guffman," a sendup of the cutthroat world of community theater, Posey played a starry-eyed Dairy Queen waitress. In "Best in Show," a spoof of the canine competition circuit, she played a high-strung yuppie with an equally high-strung pooch.

And in "A Mighty Wind," which opened last week, she portrays a formerly troubled teen enlisted to play mandolin in the folk world's only "neuftet," the New Main Street Singers. The film follows the color-coordinated ensemble and two '60s-era groups -- the tradition-bound Folksmen and the sweetheart duo Mitch & Mickey -- as they prepare to perform a memorial tribute to the late legendary manager Irving Steinbloom.

Like "Guffman" and "Best in Show," "A Mighty Wind" relies heavily on improvisation. Director Guest and co-scripter Eugene Levy provide the actors with a detailed outline enumerating key plot points; within the boundaries of that outline, the cast is free to improvise dialogue. In all three films, Posey has shown she can hold her own against celebrated comic geniuses like Catherine O'Hara and Fred Willard.

Posey is nothing if not ambitious; she recently took a break from the film world to star in an Off-Broadway revival of Lanford Wilson's play "Fifth of July," for which she earned a Lucille Lortel Award nomination. I spoke to Posey by telephone last week.

Did you have any background in improvisation prior to your appearance in the Christopher Guest films?

No, but when I went to college at SUNY Purchase we did these Sanford Meisner exercises that are all about forgetting. They're these repetition games where you describe something the other person is doing or wearing and the other person has to repeat back exactly the way it was said to them. The idea is that if you repeat what you're hearing you're not thinking about how you're going to say something; you're just repeating what you hear. It's a game about instincts and forgetting.

I don't think I could do the kind of improv where you have to respond to audience suggestions and think of funny things to say on the spur of the moment. I'm just not that kind of actor. I'd rather just react.

How much leeway did you have within the outline Guest and Levy provided to improvise dialogue or shape your character?

We had all the freedom in the world. What you bring to these films is a particular psychology you've developed about the character. That's what makes it all so interesting.

Could you talk about how the Guest ensemble has evolved, from "Waiting for Guffman" on through "A Mighty Wind"?

It's the most relaxed set I've ever worked on. People bring their cameras and sneak around and listen to what everyone else is doing; we're all interested in seeing how everyone is working. When we weren't acting we were all hanging around outside, listening to music.

I'm sad that this is all going to be over someday. These movies are all about flying by the seat of your pants, yet Chris is the most trusting director I've ever worked with. A lot of directors want to get their hands into your performance; they want to have input, they want to have power.

Christopher Guest filmed between 50 and 80 hours of material for "A Mighty Wind" and whittled it all down to 87 minutes. Did the final product meet with your expectations?

I haven't seen the final film. When you see any of the others it's crazy. When we were doing "Guffman" we were all in Austin, Texas, and every night we would watch dailies and see all this great material. Then we saw the movie and we were heartbroken. You could tell after seeing "Best in Show" that John Michael Higgins and Michael Hitchcock felt kind of sad because some of their scenes were cut. But you've got to make it into the movie that it is, and you don't know what kind of movie it's going to be until people start talking. Chris gets everyone together and then he starts composing, like a musician. He's editing a documentary, but it's a documentary cut for comedy.

I know you learned to play mandolin for the film and had to perform live in the big concert scene at Town Hall. What kind of musical background did you bring to "A Mighty Wind"?

Playing an instrument is like finding an actor's prop. When I think about musicians I think about that moment that made them choose a certain instrument. That kind of choice reveals so much about a person. Chris asked if I wanted to play the mandolin, and he played a few chords for me at his house. I put the mandolin down and then picked it right back up again. Chris said that was a good sign. I practiced from January until July, when we started shooting.

You've appeared in such a broad range of film roles. Generally speaking, do you feel more at home doing comedy or drama?

I like to walk a line. When I'm happy I'm sad, when I'm angry I'm funny. You get that kind of complexity in plays, in Chekhov, in parts that are written well. But you don't find it in most movies.

Which filmmaking experience have you found most fulfilling?

Oops, I'm busted. I said, "Tall traditional." I'm at Starbucks. I just got done with the play and I'm still on night time; I can't wind down until 3 or 4 o'clock. I'm sorry, what was your question?

Which filmmaking experience have you found most fulfilling?

You've occasionally appeared in studio pictures like "You've Got Mail" and "Josie and the Pussycats." What influences your decision to work on these kinds of projects?

I'd love to appear in more studio films, but I don't get cast. I would love to make some money. People like me and want to work with me; they just don't want to give me jobs. I think it's a numbers game. My movies haven't made a lot of money, and there's a whole list of actors whose movies have made money, and studios think those actors will guarantee a certain number of ticket buyers. But it all works out. It really does. I don't mind taking this kind of risk. It can be a compromise if you don't stay true to yourself.

I read an interview where you said you couldn't stop laughing while you were auditioning for the role Sandra Bullock ended up playing in "Speed."

I didn't know what to do besides laugh. Like -- for real, you want me to pretend to be driving a bus? I mean, really. We're all grownups here; we're not 12 years old.

What do you do to make the experience of working on a film like "You've Got Mail" more fulfilling?

I use irony. It all depends on how good the film is. If it's bad I can totally make fun of it. Let's face it, comedies these days are terrible. Jim Brooks [i.e., James L. Brooks] was making great comedies that were very human, but now it's all infantile and aimed for 7- or 8-year-olds, and I think even they're more intelligent than these movies. So what are you going to do?

Are there particular directors you'd like to work with?

You recently completed a run of "Fifth of July." What made you want to go back to the stage?

For actors there's a lot of detective work involved in Lanford Wilson's plays and that's what makes it so interesting. The play is set in 1978 and I remember seeing women like the character I played; they were so grand, they had this almost English accent. I played a copper heiress -- those kind of women make their own misery -- but at the end she's got a huge payoff in that she knows exactly what's going on; in fact, she's known all along. I had a great time.

Several years ago Time dubbed you the "Queen of Indies" and Elle once called you a "Gen-X Audrey Hepburn." How would you label yourself?

I wouldn't label myself. I've been really fortunate to have appeared in some good movies. I hope to do some that can pay and be good. But I don't want to think about labels. That stuff just feels invasive.