In James Mangold's brain-teasing, heart-stopping thriller -- think "The Usual Suspects" or "Memento" -- everybody in a lonely motel's got a secret. And someone's trying to kill them all. 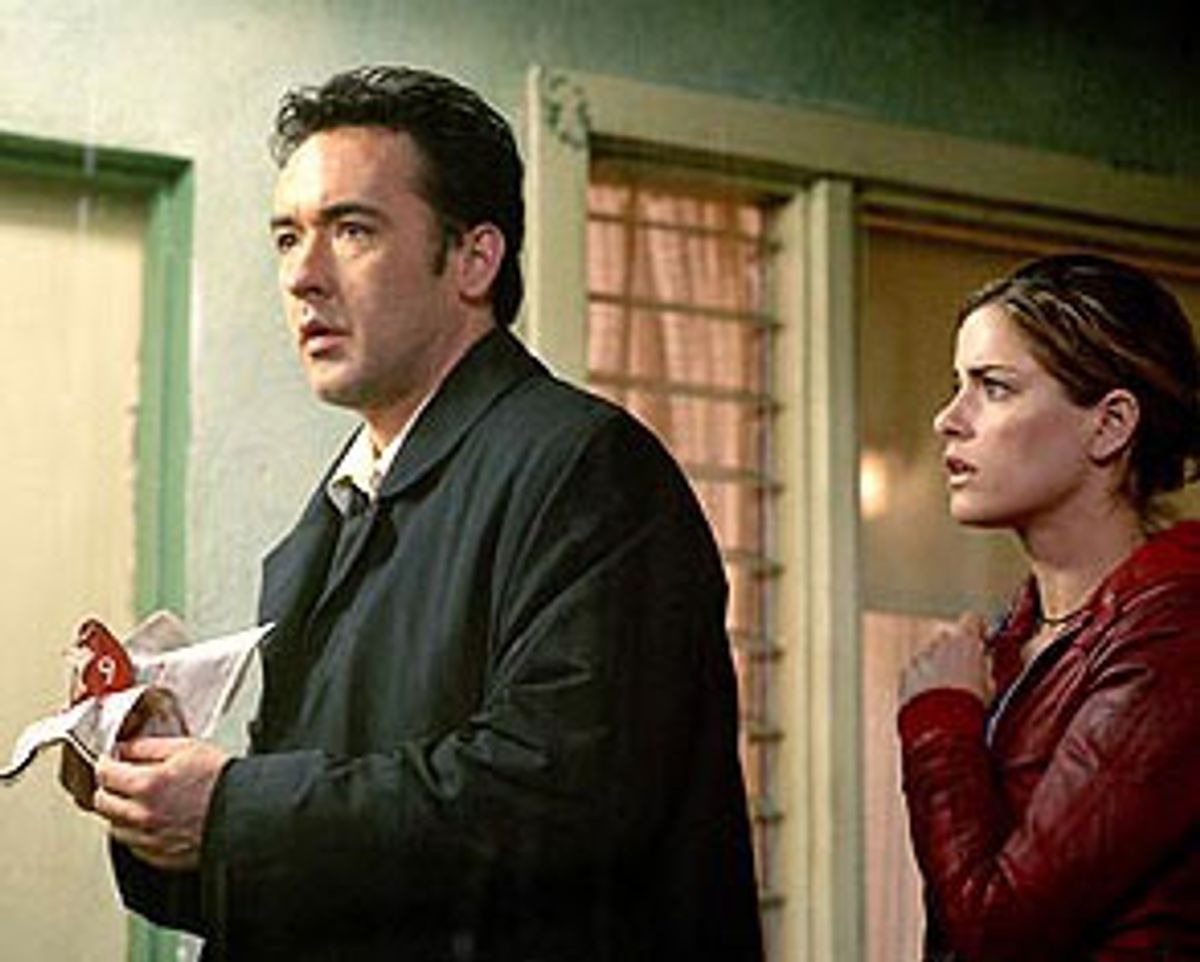 It was a dark and stormy night -- suddenly a shot rang out! That scenario occurs repeatedly in "Identity," and you can add the following ingredients: A lonely motel in the middle of the Nevada desert where the phone lines are down; an escaped homicidal maniac; a motel clerk who may be an impostor; a haunted ex-cop turned limo driver; a drug-addled fading movie star; a hooker with a heart of gold (and a suitcase full of cash); a couple who've been married for nine hours; an ancient tribal burial ground; and a troubled family with a little kid who never speaks. This thriller from director James Mangold ("Cop Land," "Girl, Interrupted") and writer Michael Cooney is so ingeniously constructed that these meta-noir ingredients feel dizzyingly enjoyable, never hackneyed. In fact, the overheated melodrama of "Identity" is crucial to its method -- and the key, in some ways, to its narrative secrets.

Don't worry, I won't give anything serious away. If you're a thriller fan, you put up with so much condescending crap at the movies that you deserve to experience the swoops and switchbacks of this rollercoaster ride without knowing any major clues in advance. "Identity" is the only movie of the last few years to deserve comparison with "The Usual Suspects" or "Memento"; it's a wicked scorpion with a double sting in its tail. When you look back on it, you'll realize the filmmakers gave you all the clues you needed to understand why the guests at that Nevada motel start to die one after the other, in sinister, inexplicable fashion. You'll go over the plot again and again, trying to figure out if it all holds up. (I'm still not sure.) But while you're watching, there's no way you'll figure it all out. (You'll have a theory partway through, but it won't be right.)

Mangold's directing career has been uneven to this point, but with this mind-game puzzler he may have found his instrument. He takes one of the hoariest devices of thrillerdom, the mixed-up chronology -- showing us the consequences of an act before we see the act itself, or scrambling the sequence of a chain of coincidences -- and makes it crackle with energy. So we see George (John C. McGinley) stumble into that lonely motel with his grievously injured wife Alice (Leila Kenzle) before we see Alice run down on the road by distracted limo driver Ed (John Cusack), who's being henpecked by the fading starlet (Rebecca De Mornay) in the back of his car. We also don't know yet that George and Alice got a flat tire when their minivan ran over a high-heeled sandal that flew out of the convertible driven by Paris (Amanda Peet), who's abandoning the fast life of Las Vegas for an orange grove back home in Florida, and has an awful lot of money with her.

Whew! At this point we're maybe 10 percent of the way through the story. Both ends of this remote Nevada valley are flooded out, so people keep showing up at the motel. They've all got secrets, some obvious, some not. Lou (William Lee Scott) and Ginny (Clea DuVall) are the high-strung newlyweds who don't know each other as well as they think. Rhodes (Ray Liotta) is a cool and collected corrections officer, who's transporting a swaggering, smirking convicted killer (Jake Busey) to Carson City. Then there's motel clerk Larry (John Hawkes), who seems to have an extensive collection of hunting knives and pornography. And George and Alice's creepy little kid, who never says anything.

This story of the fateful night in that motel is bracketed by another one, evidently some time later, in which a convicted murderer -- apparently the guy who is about to kill several of the motel occupants in story line A -- is getting a last-minute, late-night hearing before a pissed-off judge, on the eve of his execution. Who is this guy? Is he an outside intruder, or is he already in the motel? Is he the sneering convict Rhodes is transporting, or the edgy, mumbly George? Is he shifty-eyed Larry, or even haunted, sympathetic Ed? Now, now, that would be telling.

Most people who try to make thrillers make the mistake of withholding key information, which ends up being glaringly conspicuous by its absence. Mangold and Cooney (the latter is known to horror fans as the writer-director of the "Jack Frost" movies) understand that a deluge of information is far more effective. By the time these temporary neighbors begin to kick the bucket, one by one, under increasingly puzzling circumstances, we're overwhelmed with suspects and plausible theories about the crimes.

Laconic Rhodes (a nice, unshowy performance by Liotta) and soulful Ed try to be the take-charge guys, rounding up the survivors and investigating the killings -- but how trustworthy are they, separately or together? Ginny's losing her grip and keeps trying to escape, even though there's no place to escape to. Weird Larry's skulking around his weird-Larry cave, and won't stay in the same room as Paris; he has issues with "sluts," it seems. Ed tries to stitch up comatose Alice's injuries with a needle and thread, while her silent kid huddles in the corner.

The incident-packed plot and pulse-elevating pace of "Identity" don't leave a tremendous amount of room for actorliness, but Cusack, in his classic mode of thinking much more than he's saying, is clearly the star here. Ed has a Modern Library copy of "Being and Nothingness" in the front seat of his limo; there's a great moment when leggy Paris picks it up, looks at it and then looks at him -- she may not have read the book, but she knows how to read the guy.

Cooney's script, in fact, is full of sharp-edged zingers. After Liotta's square-jawed Rhodes slides up to Paris, just a smidgen too close, and asks her name, he says, "Paris, huh? I never been." She responds, "Well, you ain't goin' tonight." Later, when hysterical Ginny finally notices the omnipresent signs and tourist brochures for "The Tribal Tombs," and suggests that the denizens of the ancient burial ground are causing their problems, Rhodes snaps, "What? Now they're coming back to life like sea monkeys?" Mangold uses that hollow-drum sound made by a rotating commercial dryer to outstandingly spooky ends, and adds a terrific new entry to the catalog of How to Get Killed in a Horror Film -- while wandering around outside, trying to get decent cellphone reception.

As any decent psychology major could tell you, the characters, settings and stories of thrillers and murder mysteries are inherently symbolic. As the closed universe of "Identity," with its Agatha Christie-style cast of seemingly unconnected strangers, becomes odder and more claustrophobic, it starts to feel more like metaphor than reality. This is where most thrillers get trapped by their own devices and start to seem unbearably phony. But as existentialist Ed comes to understand -- alone among this dazzling brain-teaser's characters, he's able to catch a glimpse of the world outside -- the staginess and melodrama and dreamlike terror of this story is precisely where its reality lies.