Broke, overweight Sam and rich, studly Roy have been pals for 20 years, even if they don't have much in common anymore. Then the wife gets involved. 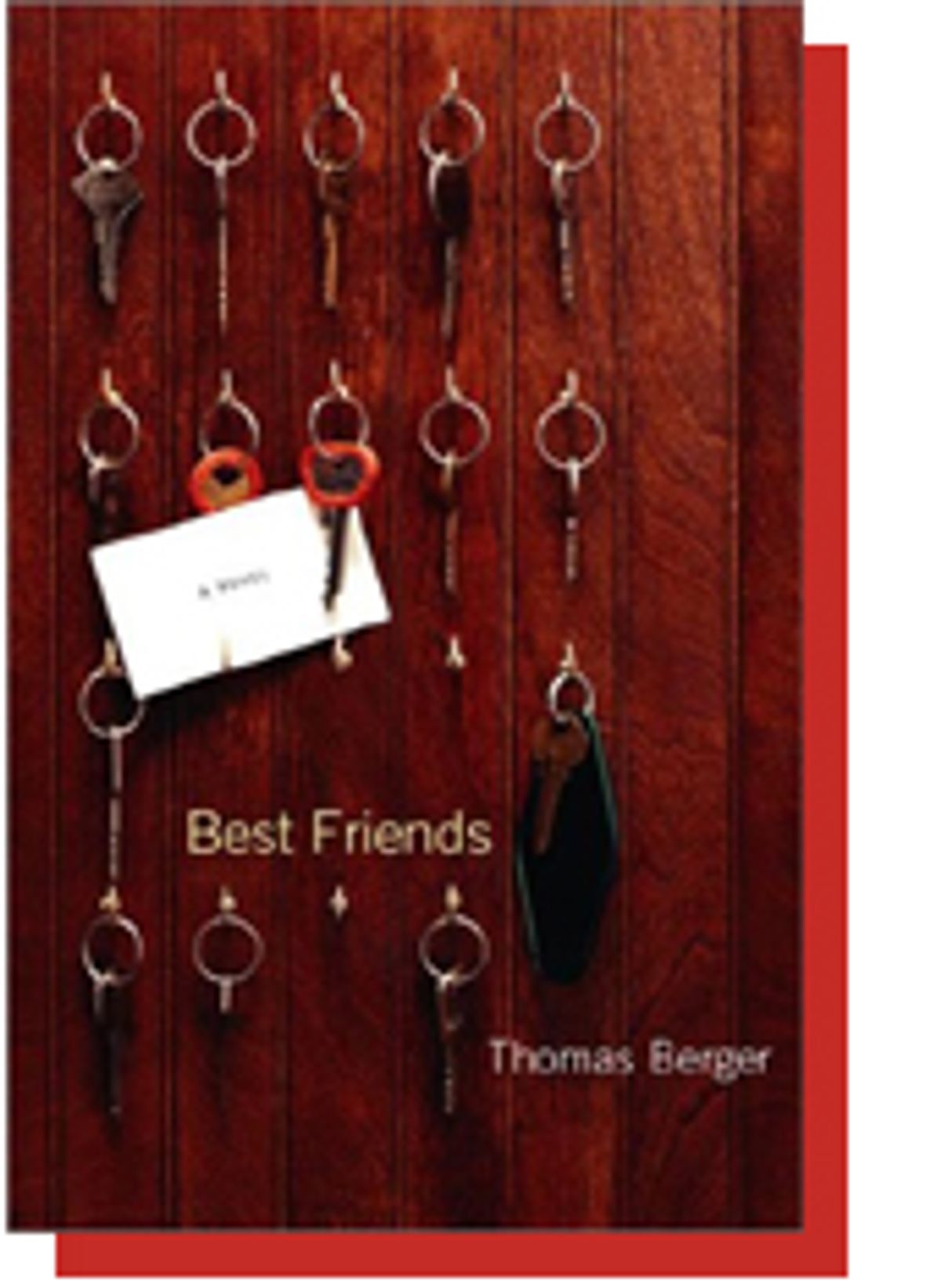 It's easier to describe what's wrong with "Best Friends" than what's right about it, but Thomas Berger's new novel is a compelling little tale of love and betrayal that draws you in rapidly and pulls you along effortlessly toward the last page. A cult figure of sorts who has written 21 previous novels -- the best known is certainly the western saga "Little Big Man," made into a classic 1970 film with Dustin Hoffman and Faye Dunaway -- Berger certainly can't be accused of not knowing his craft.

Yet in "Best Friends" he seems impressively unconcerned with many of the obsessions of contemporary fiction. Although this modestly scaled novel is evidently set in a present-tense world of cellphones and e-mail, it's utterly bereft of current pop-culture references or up-to-date slang. Sam and Roy, the best friends of the title, are both under 40 and live in an unnamed suburban town that seems to be in the metropolitan Northeast. But if either has ever heard of Eminem or Britney Spears, or holds any opinions about Jacques Derrida or Quentin Tarantino or Bill Clinton, we see no evidence of it. Besides some random bits of conceptual furniture, in fact, "Best Friends" would be more convincing set in the early 1960s than today.

The more you read of the book the more deliberate this seems; Sam and Roy inhabit a sort of timeless John Cheever neverland, the half-imaginary home country of mid-century American fiction. Sam is a shiftless culture-vulture type who lives off his banker wife, but his touchstones are early John Coltrane records and Olivia de Havilland movies. Roy is an incurable ladies' man who owns a car dealership, but he sells vintage MGs, Austin-Healeys and Rolls-Royces, not Beemers or SUVs. (That said, much of the dialogue in "Best Friends" remains improbably stilted. Acquaintances address each other as "Mr." and "Mrs.," no one ever curses and Roy finds the verb "boff" too vulgar for man-to-man conversation.)

From the outset, it's clear that "Best Friends" is a study of a friendship beginning to sour, or maybe one that turned sour some time ago. Roy and Sam have been close since their teen years as prep-school oddballs, but at this point their relationship is more one of fraternal belligerence than real intimacy. Sam is perennially broke, has ballooned to 300 pounds and drinks too much microbrewed beer. Roy is filthy rich, works out compulsively and knows every gourmet chef in the county. They barely bother to feign interest in each other's passions. Sam has been borrowing money from Roy in dribs and drabs for two decades, and "never yet [has] offered to pay back a cent." When Roy considers this state of affairs, he views it "with a certain satisfaction."

To some extent Berger tells the story of how this debt is ultimately repaid in an unexpected, almost mythological manner, although neither man consciously notices the connection between the money and what comes later. In a larger sense, "Best Friends" is about the way that every friendship becomes a complicated transaction -- in emotional, psychological and often material terms -- and about the mutual dependency it creates, which isn't easily broken even when the people involved no longer have much in common.

Berger's third-person narrative voice is closely linked to Roy's point of view, which isn't the obvious choice but creates most of the story's dramatic tension. Generous, boyish, self-pitying Sam mostly seems the more sympathetic of the two; Roy is preeningly handsome, more than a little pompous and almost entirely incapable of self-scrutiny as he bounces between his libidinous married women and precocious college girls. When Roy introduces us to Sam's wife, the icy Kristin, our alarm bells should go off even if his don't:

"Her tall, slender, blonde person was probably attractive enough, though he loyally avoided making physical assessments of a friend's spouse, but her manner made him uncomfortable, unable as he was to decide whether it was disdain or indifference. She stared at him from time to time through gray-blue eyes that seemed to become glassy for that function alone, returning to normal when they focused elsewhere, especially on her big bear of a husband, of whom she was obviously very fond."

A chapter or so later, after Sam lands in the hospital with a minor heart attack, a divorcee Roy has been dating turns up dead and Kristin takes the dazed Roy to lunch, both to comfort him and to ask him not to lend Sam any more money, the machinery of Berger's social comedy is set in motion. I'm not sure how convincing a character Kristin really is, but in a sense that's an irrelevant question, since neither her husband nor his best friend, whom she stares at so strangely, is ever capable of seeing her clearly or acknowledging what she wants. "Best Friends" may not be a novel of penetrating insights, but it does offer crisp pacing and some juicy narrative surprises that will keep readers guessing about the fate of its central triangle. Beneath its occasionally distracting artifice, its rueful comic portrait of male narcissism rings startlingly true.

Our next pick: A 16-year-old road trips to Arizona to dig up her mother's corpse -- and the jewels rumored to be buried with her