The cyborg who ... governed me?

In what may be the weirdest campaign curtain-raiser in history, Arnold Schwarzenegger returns as a decrepit robot in "Terminator 3." 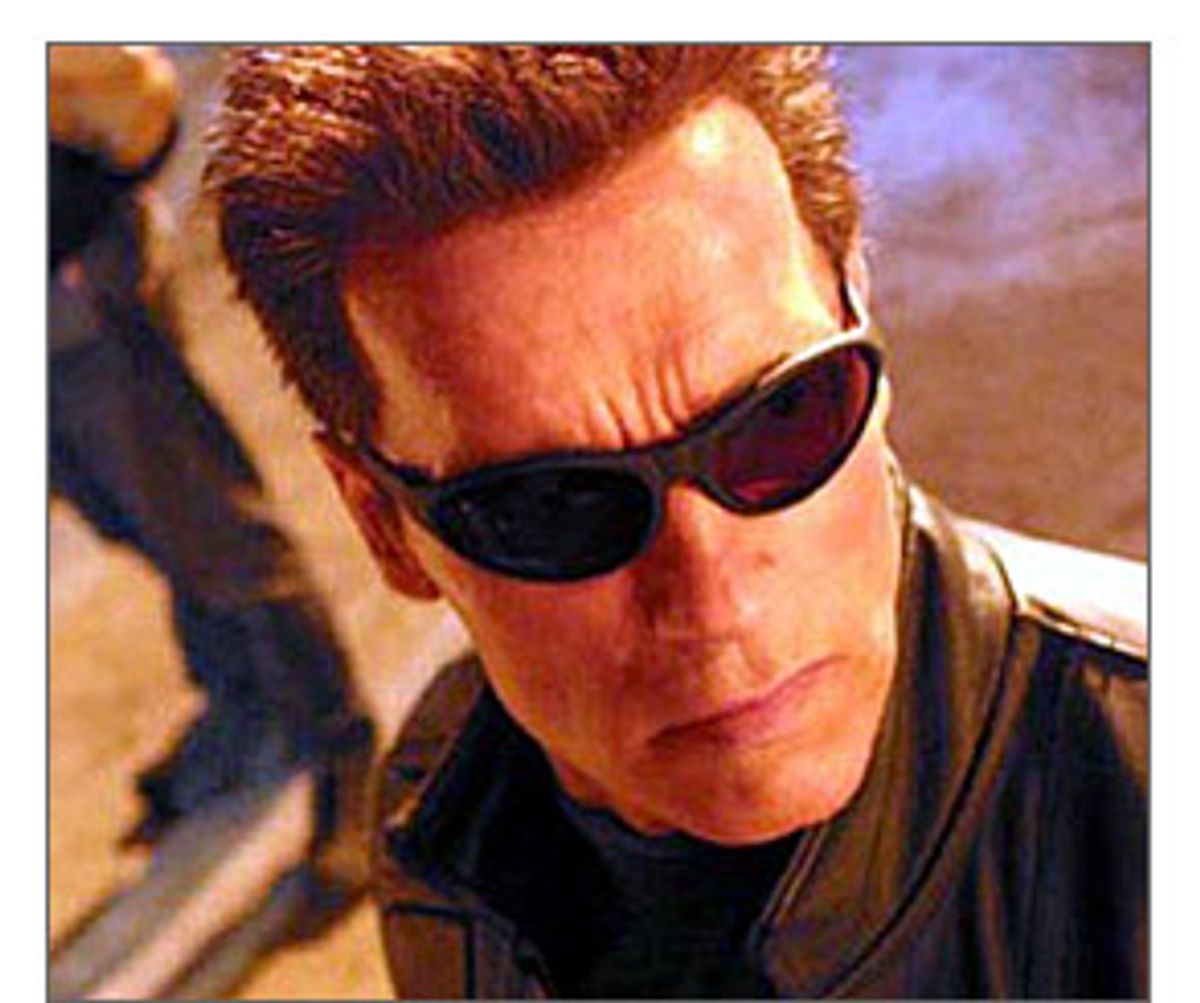 Arnold Schwarzenegger has reportedly been pondering an entry into politics since he first became a major box-office star almost 20 years ago, when his mentor Ronald Reagan was in the White House. For that idea to work, the Nietzschean superhero of the 'roid-rage 1980s had to reduce himself in scale somehow, become lovable, reveal some flaws. (He also had to clean up his own personal act, get married and morph into a Republican family man -- although that's another story.)

Perhaps that's the secret of the pedestrian but appealing "Terminator 3: Rise of the Machines," a back-to-basics B movie in which Schwarzenegger, who will turn 56 later this month, plays an aging, lovably defective robot, a softy cyborg who still doesn't grok human emotions but can be counted on to do the right thing -- even while being dragged bodily through many millions of dollars' worth of Los Angeles real estate and motor vehicles at the end of a construction crane.

If "T3" is the opening salvo in Arnold's still-unofficial California gubernatorial campaign, it's a curious one. This movie -- arriving 12 years after James Cameron's genre-defining "Terminator 2: Judgment Day" and 19 years after Cameron transformed Schwarzenegger from sideshow attraction to legitimate star with the original "Terminator" -- feels more like the first chapter of a new series than the capstone to an old one. (At this pace, the star will be 75 when "T5" comes out. But hell, why not? If Clint Eastwood can play action roles well past even the Republicans' idea of retirement age, surely Arnold can follow suit.)

In a summer movie season whose official theme is now blockbusters that make a pile of money but fade quickly and end up feeling like disappointments (see "The Matrix Reloaded," "The Hulk," and "Charlie's Angels: Full Throttle"), "T3" may succeed, like Disney's surprise smash "Finding Nemo," by simultaneously lowering expectations and limiting its artistic ambitions. No previous knowledge of movies or life is required, no political lessons are taught and no French philosophers are name-dropped. Sure, the plot may involve the end of the world, but it's of secondary importance at best (although it does take an unexpected twist at the end). What you need to enjoy this flick is an appetite for seeing things destroyed, a recognition of the fact that Arnold looks cool hefting a coffin in one arm and a machine gun in the other and a willingness to tolerate Claire Danes being whiny in an irritating romantic subplot.

When you consider that the Terminator series has lost its creators (director Cameron and producer/co-writer Gale Anne Hurd), its most interesting human performer (buff mama Linda Hamilton, who failed to develop any kind of career out of her gender-bending "T2" role), and any sense that its leading man is a novel or interesting figure, it's surprising that "T3" works even half as well as it does. Director Jonathan Mostow (of the World War II submarine epic "U-571"), perhaps realizing his impossible predicament, sticks closely to the meat and potatoes of the action genre, blowing up a building or staging an imaginative motor-vehicle chase -- involving, at various times, a hearse, a gigantic R.V., a fire engine, the aforementioned construction crane and a veterinarian's animal-transport truck -- anytime the talky-talky scenes, infrequent as they are, slow things down too much.

If anything, this film feels closer to the medium-tech appeal of Cameron and Hurd's original 1984 "Terminator," albeit at approximately 30 times its budget, than to the baroque excesses of "T2." That first "Terminator" struck such a nerve because it had clearly been made by and for action-movie fans; it understood their tastes and treated them with respect. Its comic-book story line was simple but well thought out and it offered us various levels on which to appreciate the wondrous Schwarzenegger. The "Conan the Barbarian" camp value of his inflated physique and pompous persona were still present, but Cameron and Hurd also saw his potential to be most terrifying, and finally most human, while playing a machine.

This time around, as Arnold himself explains to youthful hero John Connor (Nick Stahl), the Terminator himself is an "obsolete model" that no longer works perfectly and wears a leather-boy outfit borrowed from a gay Chippendale-style dancer. (Sadly, he rejects the star-spangled Elton John shades.) Once again he's been sent back in time to fight a vastly superior opponent; this time it's T-X (Kristanna Loken), a blond fembot from the future with rocket launchers in her arms and pneumatic breasts that inflate to cop-distracting proportions on command. She can do instant DNA analysis of blood samples with her tongue (yeah, baby!) but, curiously, is unable to detect a hyperventilating girl hiding 10 feet away.

OK, let's back up a minute. You probably thought the end of the world had been averted by Hamilton and bad-robot-turned-good Arnold in "T2," right? Or rather, you barely thought about it, but you didn't exactly spend sleepless nights fretting about the fate of the human race in this particular fictional universe. Well, that was false comfort, my friend, of the kind on which long-in-the-tooth sci-fi series depend. It turns out that John Connor (the son of Linda Hamilton's character, played by Edward Furlong in 1991), the future savior of the human race in its apocalyptic war against the machines, has grown up into a slightly scruffy but adorable teen-idol type (Stahl, who played the murdered son in "In the Bedroom").

Plagued by troubling dreams of killer robot armies, endless underwater fields of skulls and the kind of nuclear Armageddon that went out of fashion around 1989, John's convinced the world hasn't yet been saved. "They tried to murder me before I was born -- machines from the future," he muses in the half-baked voice-over narration that comes and goes throughout "T3." So he's living "off the grid," doing odd jobs to pay for his faintly edgy denim outfits, his motorbike, his half-shaved Justin-wannabe look and his longneck bottles of Bud.

John wrecks his bike one night and ends up crashed out in the veterinary hospital managed by Kate Brewster (Danes), a perky 20-something who once made out with him in somebody's basement, as it turns out, but has since moved on to a boring, responsible fiancé. Is this fate? Well, maybe. It's definitely the beginning of a ponderous attempt to pander to young audiences with some wishy-washy romantic comedy. By the time Schwarzenegger and Loken show up from the future to trash the place, a pattern is established: John tries to convince Kate that yeah, really, in the future he's going to save the world and she rolls her eyes like he's a total psycho who is so lame.

Danes and Stahl are likable enough as performers, but they're locked into squeaky-clean roles with little dimension; you get the feeling they, Mostow, the screenwriters (John Brancato and Michael Ferris) and everybody else are deeply bored by this aspect of the movie and want to get back to the exploding hearses. Their interaction is about as sexy as a game of touch football; at any moment they're likely to begin punching each other on the shoulder or wrasslin' in a big old pile of autumn leaves. (Their best moment comes near the end of the film, when Kate grabs a machine gun and blows away a robot aircraft that's after them. "You remind me of my mother!" John gasps.)

His skin peeling off, his perfect Muscle Beach hair messed up and his circuits fritzing out, Schwarzenegger's humane robot is clearly the sympathetic center of "T3." He hauls his deteriorating robo-ass from scene to scene with conspicuous effort, repeatedly getting it kicked by a girl for the benefit of all mankind. If the show-stopper here is clearly the extended early sequence when T-X dangles him from that crane and smashes him through several blocks of L.A. buildings, my favorite scene is more metaphorical. Later on, she follows him into the men's bathroom of a secret military facility and literally mops the place up with him, flinging him through a row of urinals.

John and Kate need to get to Kate's dad, a big-time Mr. Secret military dude (it's exactly the same role played by Sam Elliott in "The Hulk"), before he surrenders control of the U.S. air defense system to an evil computer that's bent on starting World War Whatever. Mostly this involves a lot of cool "Battlebots"-style fight scenes, after T-X activates a lot of evil robot warriors conveniently stored right next door to NORAD HQ. But loyal fans who actually do care about the Terminator saga's story will find some real surprises here -- both in terms of what happens in this movie and what will supposedly happen down the road -- and barring a spectacular flop at the box office, it's going to take at least one more chapter to untangle it all.

Don't get me wrong: I think the prospect of a Gov. Schwarzenegger is terrifying and ridiculous for any number of reasons. (Let's spare a moment of gratitude to the Founding Fathers for Article 2 of the United States Constitution, by the way, even if it also means Arianna Huffington will never be president.) But sillier and more dangerous things have happened and the nation has just about survived. (See Reagan's entire political career. See Jesse Ventura, taking time off from the Minnesota governorship to announce XFL games.) If it does play out that way, Arnold's going to find life in Sacramento pretty dull. We'll all be better off if he's fighting killer droids of the future (again) rather than terrifying listless legislators with budget vetoes and mandatory physical-fitness routines. Is "Terminator 3" the end of Schwarzenegger's movie career, as he has hinted, and the beginning of something else? Oh, he'll be back, all right. We just don't know why or how, and we have to pray it won't be the end of the world.