The mystery-meat lobby bites back

Slapping country-of-origin labels on food products would benefit the global environment as well as American producers. So why did Congress just gut the new labeling bill? 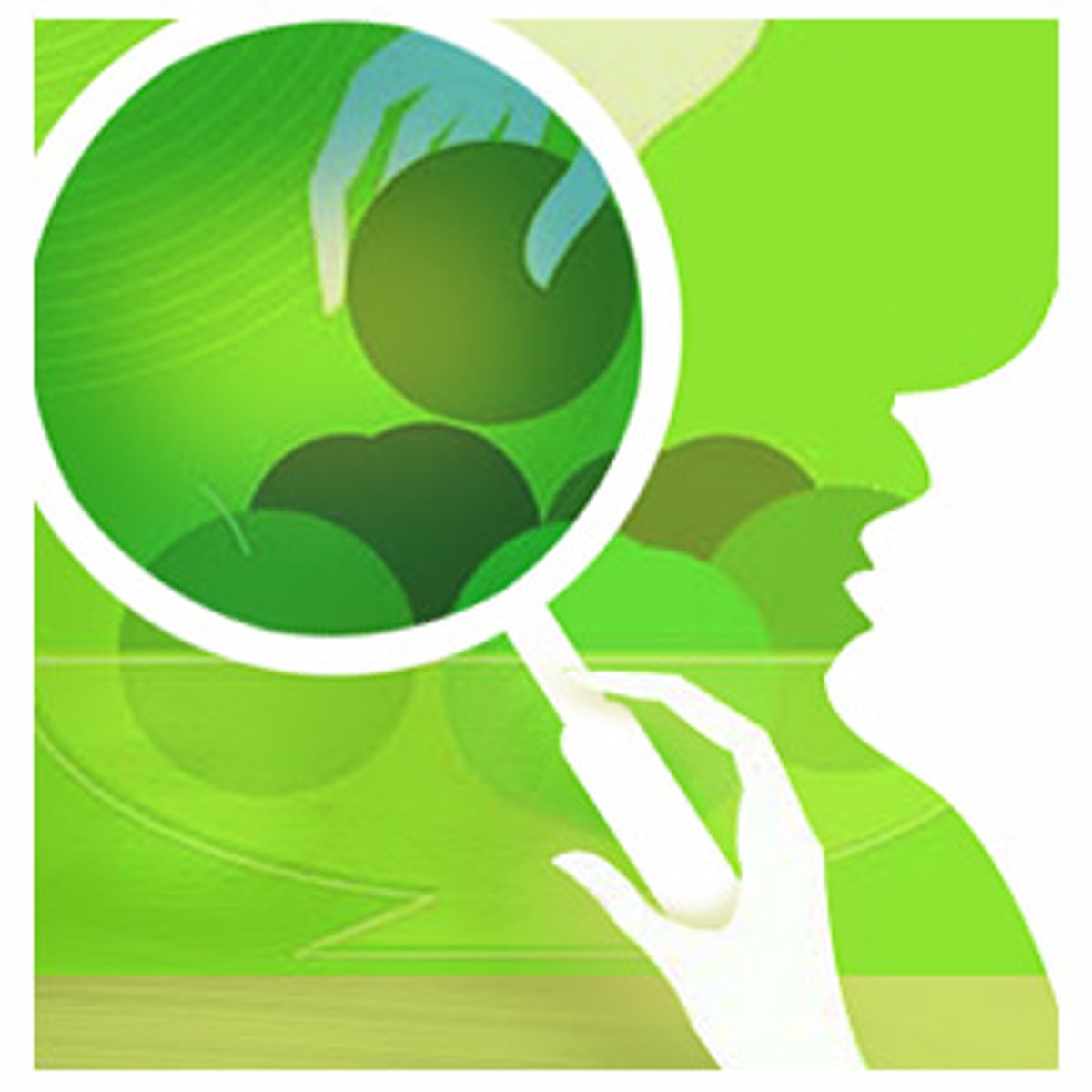 From the mid-1980s onward, conservationists and marine biologists spent a decade lobbying for a law requiring U.S. shrimp trawlers to use sea turtle excluder devices.

Since prawns are small, the nets that harvest the diminutive critters also entrap tons of other sea creatures, gobbling up about four pounds of "by-catch" marine life for every one pound of shrimp.

The conservationists were successful. Since 1994, U.S. shrimpers have had no choice but to employ turtle-saving devices that allow the endangered reptiles to avoid becoming collateral damage on the way to meeting human demand for shrimp salad and shrimp-fried rice.

But this happy tale of turtle-liberation, brought to you by the wonders of shrimping technology and government regulation, has a hidden catch: $3 billion worth of the shrimp consumed annually in the U.S. is imported from elsewhere around the world, according to the National Marine Fisheries Service.

And that shrimp, produced by lower-cost labor and often without regard for the environment, is generally cheaper than fished-in-the-U.S.A. shrimp.

It's a classic globalization dilemma. A global market for seafood means that consumers in the U.S. have access to fish and shrimp from all over the world, and benefit from the low prices generated by fierce competition. But American producers get squeezed by that competition, and American consumers have no way to know whether each popcorn-fried nibble is a murderous attack on sea turtles or is instead blessed by environmentally sustainable good karma.

That's because no amount of public education by conservation groups like Monterey Bay Aquarium's Seafood Watch and Seafood Choices Alliance, about the declining state of the world's oceans, can answer this question when you go to the grocery store: Where did that fishy in the window come from?

"Consumers going into the store have no idea where their meat came from. They're just looking at a wall of meat," says Patty Lovera, deputy director of the energy and environment program for the consumer group Public Citizen.

Those circumstances were supposed to change. On May 13, 2002, as part of Farm Bill 2002, President Bush signed into law legislation which mandated country-of-origin labeling for beef, lamb, seafood, fruits and vegetables by Sept. 30, 2004. The new law does not apply to restaurants, but requires retailers, like grocery stores, to label the country the food came from, and even distinguish between wild-caught and farmed fish.

But even as the new regulations are being crafted, they're under attack. On Monday, the House of Representatives passed a bill that cut the funding necessary to implement the labeling provisions ordered by the Farm Bill. Without that funding, the law is toothless.

Proper labeling could be the key to giving consumers the opportunity to make an informed choice -- and give producers who abide by environmental regulations or employ higher-priced labor the chance to successfully differentiate their product. But those goals conflict with the interests of packers, wholesalers and retailers. They want the freedom of a global source for commodities, without the expense and hassle of labeling.

Supporters of the original labeling bill are now lobbying the Senate to try to keep the funding. But as of Monday, the lobbyists for the distributors and retailers are winning. On the losing side stands an unlikely consortium: the American fishing industry, sea turtles and you, the consumer, trying to decide whether those cheap tiger prawns from Thailand are a steal of a deal or a devil's bargain.

But while eating shrimp may be healthier for American consumers than gorging on red meat, all those imports may not be so healthy for the world's ecosystems. The turtle-drowning shrimp trawlers still at large in other parts of the globe are hardly the worst of the documented environmental fallout from shrimp; globally, shrimp farming is also considered a major environmental threat. In developing nations in Southeast Asia, shrimp farmers have been responsible for the clear-cutting of hundreds of thousands of mangrove groves, according to Jennifer Dianto, the program manager for the Seafood Watch Program at the Monterey Bay Aquarium. The clear-cutting causes erosion, exacerbates storm surges and eliminates important breeding grounds of juvenile fish.

"We just have stricter regulations than Southeast Asia or Central America," she says, explaining why her group recommends against eating any imported shrimp at all, suggests that U.S. farmed or wild-caught shrimp should be approached with "caution" and advocates consumption of trap-caught shrimp as a "best choice."

But there's the rub: There's no way to tell what's been caught in a trap, trawled, or farmed. That's why labeling is essential, from the point of view of both conservationists and the U.S. producers who are getting hammered by worldwide competition.

"It's a first step in giving the consumer the information about how their food was grown or raised or caught," says Mike Hirshfield, chief scientist for Oceana, a conservation group. "It still doesn't tell you everything, but if you know that your shrimp comes from a country that essentially has no controls over its fishery, or where all of its shrimp are raised in what used to be mangrove forests and are now shrimp farms, you then have at least the possibility of making the choice."

But after Monday's House vote, the meat labeling provision is currently under serious attack.

"The appropriations bill that passed yesterday stripped the funding for the meat provisions," says Bill Bullard of Americans for Country of Origin Labeling on Tuesday. "This is an underhanded way of undermining the law and delaying implementation of the law." And if similar provisions pass the Senate, much of the labeling scheme will be delayed for at least a year. "That's how games get played in D.C.," says Lovera. "While a law tells them to do something, until a budget gets them the money to do it, it can be a moot point."

How could anyone argue that giving more information to consumers is a bad thing? Welcome to the world of meatpackers and distributors. Kara Flynn, director of communications for the National Pork Producers Council argues that country-of-origin labeling will be bad for the American pork business, and therefore bad for American consumers.

"We want to give consumers good things, but this is not something good," says Flynn. "It's not going to help them understand the product any better, and it's going to give them more costs. If anything, that's un-American."

The added expense of keeping records up and down the supply chain will be costly for the meat industry, and in turn costly for consumers, says Flynn. "People say that consumers want to buy American after Sept. 11. But this law is to the detriment of many different industries that employ hundreds of thousands of people in this country. There's nothing patriotic about that."

Under the Farm Bill, retailers would be required to keep auditable records on where all food products came from for two years. The USDA estimates that it would cost industry $1.97 billion in its first year to implement, although that figure has been labeled inflated by economists at the International Trade and Policy Center at the University of Florida.

"We found USDA's original record keeping cost estimate to be outrageously inflated, with the real costs being 90 to 95 percent less" said Dr. John VanSickle of the center. "If passed on to consumers, that translates to less than 1 cent per pound for foods covered by the labeling law." He also said that the idea that producers, wholesalers, packers and retailers currently have no records at all about what country anything they're selling comes from is false. Current regulations, such as those that require health and sales documentation, would provide much of the needed information.

Flynn dismissed the environmental aspect of labeling as only being a selling point for consumers in "urban areas, like San Francisco and Washington, D.C."

"The folks who are proponents of this law are only thinking about where they are," she charges, saying that most consumers make buying decisions based on price, quality and taste.

But Lovera, from Public Citizen (who is in fact based in Washington), defends the consumer-right-to-know aspect of the country-of-origin law: "There does seem to be a growing awareness among consumers that what gets done to your food and where it comes from matters, and so this makes them able to act with a little more information." Are you buying local or buying from Laos? And would you like to know?

Lovera says that wholesalers are using the global marketplace to buy food products "wherever it is the cheapest -- 3,000 to 10,000 miles away -- where there is cheap labor and weak rules. There are plenty of small farmers here who need a way to pass on to the marketplace the value that comes from growing food close to home, and this is one small way to do that."

Tim Moore from the Texas Aquaculture Association and the Texas Shrimp Farmers' Association, testifying at one of the USDA "listening sessions" held to discuss the labeling law, argued that the new rules will benefit the local producers.

U.S. producers could use the law as a way to make their product more attractive to consumers, by boasting that it's made in the USA, he said. Moore testified that shrimp farmers in Texas have seen profits per pound decline steadily in the last year and a half. "A large part of that decline and erosion ... is because of the excessive dumping of shrimp products from around the world that have been rejected for one reason or another by the European Union or Canada."

Bullard, from Americans for Country of Origin Labeling, says that the reason groups like the National Pork Producers Council and the American Meat Institute are kicking so hard against this regulation is that it undermines meat-packer control over the supply chain: "The real issue here is that this takes market power away from the packers. If the product is not differentiated, the packers have exclusive control over where to obtain the inventory to satisfy industry demand. U.S. producers cannot differentiate their products from among the growing volumes of imported products, and U.S. consumers cannot exercise choice. Competition cannot occur at the retail marketplace, if U.S. producers cannot differentiate their product."

If the proponents of the labeling laws can salvage them from the appropriations attack, it will be up to domestic producers, like Texas shrimpers, to find innovative ways to convince consumers that buying American has its benefits. And even conservationists admit that the verdict is still out on whether many Americans will be willing to pay a premium to ensure, say, that they're not unwittingly eating the ghosts of sea turtles with their shrimp dinners. But as Oceana's Hirshfield points out: "You can be sure, until the information is there, no one is even going to have the opportunity to charge a premium."