This neo-noir set in multicultural London is director Stephen Frears' grandest film in a decade -- and features the worst toilet scene since "Trainspotting." 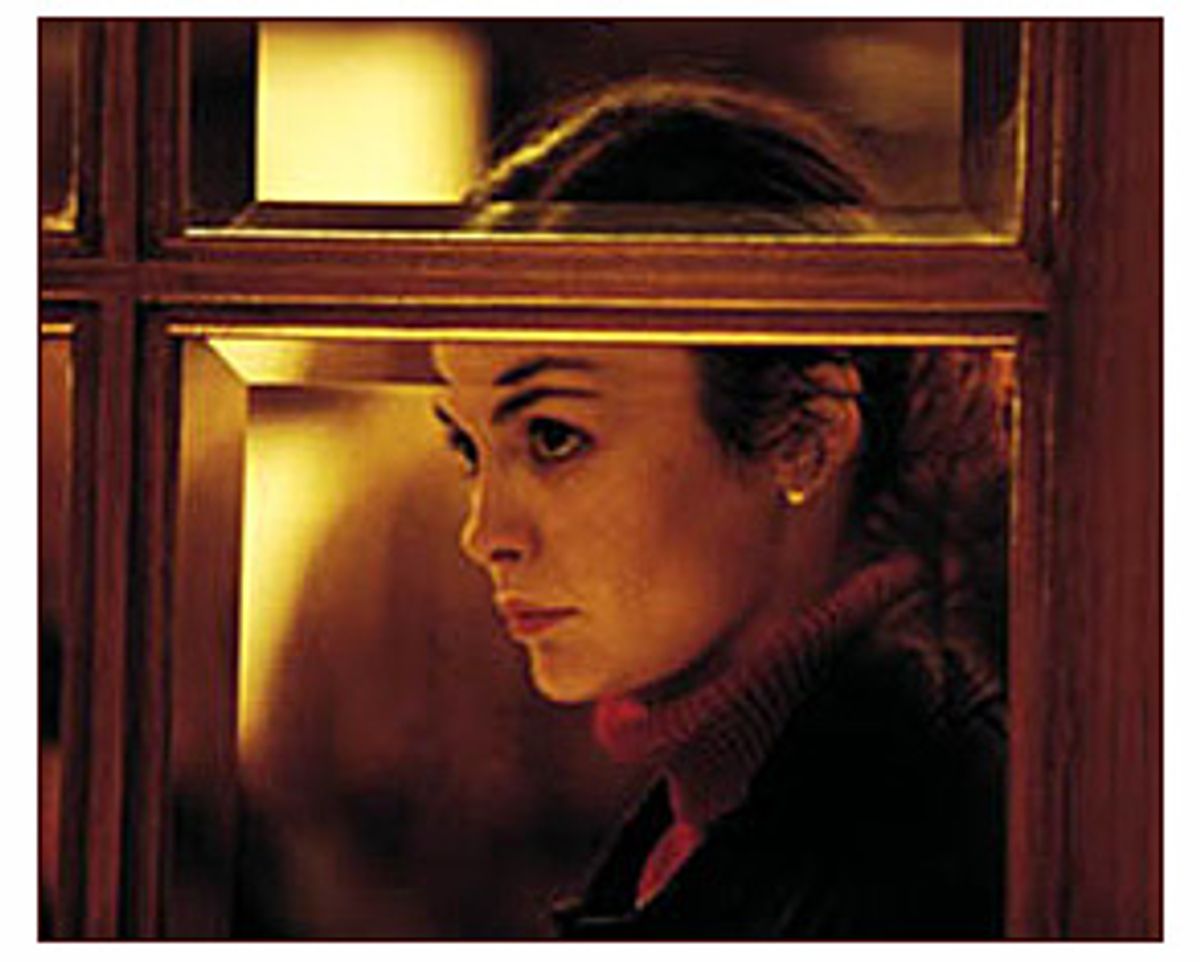 Like all of Stephen Frears' best films, "Dirty Pretty Things" is a nifty genre film with a sideways edge of social and sexual commentary, a grim fable of pragmatism and desperation within which beats a sentimental heart. It also brings him back to the turf he explored so fruitfully in the mid-1980s with "My Beautiful Laundrette" and "Sammy and Rosie Get Laid" -- to multicultural London, the imperial capital invaded and transformed by its former subjects.

Frears bounced back and forth across the Atlantic through the '90s, going from smaller British and Irish productions ("The Van," "Liam") to higher-visibility Hollywood product (including "High Fidelity" and the disastrous Julia Roberts project "Mary Reilly"), so he may not have gotten full credit for being one of the expert zeitgeist-channelers of our day. His return to the immigrant-rich streets of London may superficially remind you of his '80s collaborations with writer Hanif Kureishi, but "Dirty Pretty Things" has quite a different story to spin.

The London of "Sammy and Rosie" was brazen, optimistic and charmingly specific, while the city created here by Frears and screenwriter Steve Knight is a globalized Babel, a fluorescent-lit service economy of sweatshops, hospitals and hotel bathrooms that could just as easily be in Paris or Hamburg or New York. The characters are Nigerians and Turks and Spaniards and Russians -- virtually the only white English-speakers in the entire film are sinister immigration officials -- but it's less accurate to say that they have reshaped their once-gray city than to suggest that global capitalism, that virus more unstoppable than anything in "28 Days Later," has reshaped it along with everybody who lives there.

In "Dirty Pretty Things" London has become a vibrant 24-hour marketplace, all right, but there's something feverish about that vibrancy and everything that isn't bolted to the floor is on sale at a deep discount, including the bodies, minds and perhaps souls of the newest arrivals. For my taste, there's something a bit overly mechanical about the way Knight's thriller plot plays out, and the social message in his script sometimes feels like a blunt instrument. But the bleak pathos of Frears' vision here is never short of dazzling; "Dirty Pretty Things" captures, with marvelous intensity, an alternate universe of people who go to work by dawn or by dusk, who sleep away the day on rented couches or in hospital basements, who avoid talking about their pasts and will do just about anything to stay awake through a 16-hour work day.

A neo-noir setup like that requires an existential hero, and Frears has a doozy in Okwe (Chiwetel Ejiofor), who was a doctor back in Nigeria but now is driving a cab by day and working the desk at a medium-sleazy London hotel by night. How has a man of his education and accomplishments sunk to this? "It is an African story," he says with a shrug.

Ejiofor, who is English by birth (and prepared for the role by studying his parents' Nigerian accents), is an actor of tremendous expressive depth. Without really doing anything -- with the raising of a brow or a widening of his large, liquid eyes -- his handsome, almost aristocratic face conveys momentary flashes of the emotional wellspring Okwe is guarding like a military secret. This guy may make some questionable decisions, but we know he's going to be a hero from the moment we meet him; he's just a little bit bigger than the people and places around him, which is just what this movie's amoral universe needs.

Okwe moves through this movie's mean streets, a man who is not himself mean. He uses pilfered medication to treat his fellow cab drivers for the clap, pals around at the hotel with resident hooker Juliette (Sophie Okonedo) and lugubrious doorman Ivan (Zlatko Buric) and does his best to avoid their boss, the appropriately named Sneaky (Sergi López, the villain from the French thriller "With a Friend Like Harry"). His best friend is an Asian immigrant named Guo Yi (Benedict Wong), with whom he plays chess in the peaceful surroundings of a hospital morgue. When Guo Yi offers him the choice of Chinese or English tea, Okwe chooses the former. "I don't know how you drink that stuff," his friend says sadly.

Like any decent noir hero, Okwe has a weak spot. His is a Turkish hotel maid named Senay (Audrey Tautou, in a nuanced performance that proves she has more to offer than the candy-cute of "Amélie"). When Senay's at work, Okwe sleeps on her couch, admiring the postcard of New York she has enshrined on the wall like a relic. She won't give him a key and his presence in her tiny flat, even for a few hours at a time, threatens to draw the unwelcome attention of the immigration authorities.

But something is growing like a resilient little London weed between these two overworked and overly guarded newcomers, one of them a sheltered, virginal Muslim girl and the other (as we begin to figure out) a deeply wounded man who for some reason abandoned his family. If "Dirty Pretty Things" never exactly becomes a love story -- or only partway becomes one -- it's really remaining true to itself. These two people are tired all the time and rarely see each other; there are obvious barriers between them (race, religion, language) and things in each of their pasts holding them back. But as in, say, "Casablanca" (and the faint resemblance between the two films may not be accidental), this makes the time they actually spend together seem that much more precious, a few stray grains of sand stolen from time's emptying hourglass.

One night at the hotel Juliette sends Okwe upstairs to investigate a clogged drain and he makes a horrific discovery. If there's an award for Worst Toilet Scene in a British Film, post-"Trainspotting" division, "Dirty Pretty Things" is a shoo-in. When he suggests to Sneaky that they need to call the police, the latter merely hands him the phone with a smirk. (For obvious reasons, Okwe would rather not start conversations with the cops.)

"The hotel business is about strangers," Sneaky tells him, "and strangers will always surprise you. They come to the hotel at night to do dirty things, and in the morning we make it all look pretty again." It rapidly becomes clear that Sneaky himself is involved in something even less pretty than the hotel business. Okwe must intervene when two men speaking an African language he's never heard before turn up in Sneaky's office; one of them is near death from a mysterious wound, but they refuse to go to a hospital.

But his axiom remains the movie's manifesto even as its rather conventional plot engine kicks in: People like Okwe and Senay and Sneaky, whether they do good or evil, are the invisible midnight agents of capitalism. They change the sheets, scrub the floors, retrieve awful things from the toilets, buy and sell whatever needs to be bought and sold in secrecy. You don't see them, but they're always there. (Dressed in a custodian's smock, Okwe is able to walk right through the security checkpoints in a hospital and steal the medical supplies he needs; as a black man with a mop, he becomes virtually part of the furniture.)

Okwe's first impulse is to worry about his own problems, but we aren't fooled by this cynical attitude for a second. As his friend, the morgue attendant Guo Yi, observes, "There is nothing so dangerous as a virtuous man." Ultimately, of course, Okwe will hatch a scheme to rescue Senay and get revenge upon Sneaky -- and it's one of those meticulous conspiracies that only happen in thrillers, involving the participation of Ivan, Juliette, Guo Yi, Okwe's fellow cab drivers and seemingly the entire London black-market underworld.

Still, if "Dirty Pretty Things" veers from bleak urban naturalism to artificial wish-fulfillment (and then to a bittersweet conclusion -- bring a Kleenex or two), perhaps that's the role of the movies. Frears' vision of London's invisible work force is never less than captivating and warmly sympathetic, and Ejiofor's performance is a portrait of exhausted dignity that will stick with you for years. This isn't quite the masterwork of modern England toward which the filmmaker has pointed since "Sammy and Rosie," but it's nonetheless the grandest and most vigorous movie he's made in at least a decade. Like Okwe himself, it rises above its limitations, and it's just a little bit bigger than the landscape around it.