Mike Figgis' star-packed project on the Hollywoodization of the world is either brilliant or a mess. Regardless, he's one of the signature filmmakers of our era. 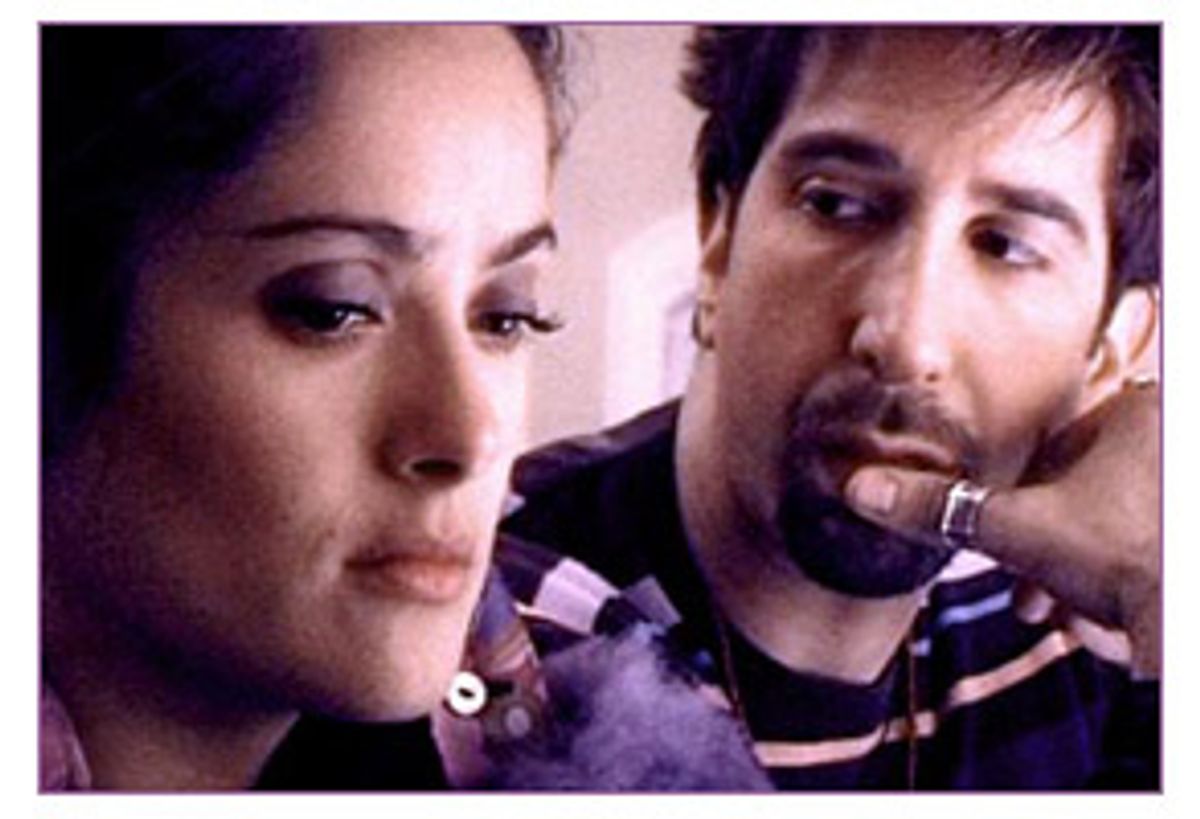 I honestly don't know whether "Hotel" is a good movie or a bad one -- right now I'm stuck somewhere between "fascinating failure" and "nettlesome work of genius" -- but I do know that Mike Figgis should be honored for making it. Like much of Figgis' recent work, it's a bizarre hybrid of high style and obscure art, of the shallowest kind of celebrity worship and the most daring fringes of the avant-garde. I think this blend is deliberate, and that the point of "Hotel," more or less, is that the Hollywoodization of the world has led to a global culture of vampirism and cannibalism, but I can't even be sure about that. Figgis has become the obvious heir to two people who aren't dead -- Jean-Luc Godard and Helmut Newton -- and I guess the more you think about it the less the distance between them actually is.

I can't think of another movie with this many stars in it that has ever been so deliberately puzzling, or is likely to be seen by fewer people. Maybe it will become a midnight cult movie in the vein of Liliana Cavani's "The Night Porter" (an obvious point of reference), but then again maybe it won't. Here's a taste: "Hotel" begins with a character played by John Malkovich arriving at an exclusive boutique hotel in Venice, sometime after the main events of the film have occurred (as we will figure out later). He is taken to the basement and housed in some kind of prison cell, where his captors sit with him -- at a table partly in the cell and partly outside it -- engage in polite, educated talk and serve him a luxurious dinner featuring a mysterious carpaccio-like delicacy. The mystery meat is human flesh. Malkovich never appears in the movie again.

One could keep going, almost without getting anywhere. "Hotel" (which opened last week in New York and Los Angeles), is a movie about the making of a movie of a play -- specifically, John Webster's "The Duchess of Malfi," the all-time gore-fest of the Elizabethan stage -- and sometimes a movie about a TV documentary about the making of a movie of a play. Well, except for the parts when it isn't about those things, and concerns the sexual exploits of the guests and staff in a hotel apparently run by a cannibal cult. It might be more accurate to forget all that stuff and describe "Hotel" as an improvised party for the director and his cast. While Figgis pursues a bewildering array of digital-video capturing and editing techniques, David Schwimmer gets to play a Machiavellian Hollywood prince, Rhys Ifans plays a pretentious Dogme director, Salma Hayek and Lucy Liu get in a hair-pulling catfight and Saffron Burrows rapes a hunky male costar.

Whatever you make of Figgis and his deliberately wayward body of work, he's now clearly one of the signature filmmakers of our era. If he hasn't become a celebrated name in the way that Martin Scorsese and Quentin Tarantino have, or even in the way that Darren Aronofsky, Baz Luhrmann and Richard Linklater have, that only testifies to his consummate slipperiness. He has made genre films ("Stormy Monday") and Hollywood films ("Leaving Las Vegas" and the forthcoming "Cold Creek Canyon"); he's made arty, personal experiments ("Timecode" and "The Loss of Sexual Innocence"), deconstructed classics ("Miss Julie") and indefinable in-betweeners ("One-Night Stand"). He has also refused to become identified with a particular generation or milieu, and refused to parlay the enormous success of "Leaving Las Vegas" -- one of the four or five best mainstream American films of the '90s -- into a lucrative career as a crafter of prestige Hollywood spectacles, à la Ridley Scott.

But as difficult as Figgis is to pin down and as disparate as his projects have been, there's an undeniable thematic consistency to his work. Any Figgis movie is going to include a remarkable eye for color, a playful and intuitive sense of framing and some kind of ambitious technical experimentation. My colleague Stephanie Zacharek has convincingly argued that, generally speaking, there is less to the DV "revolution" than meets the eye, but Figgis has been at the forefront of DV exploration for years now. "Timecode," his 2000 L.A. melodrama shot in real time, with the screen cut into four quadrants displaying different but simultaneous scenes (or at least different camera angles), made little impression outside film-geek circles, but it prefigured the technology and methodology that would make Fox TV's "24" a hit two years later.

Then there's the sex. Any Figgis film is also going to feature a tall, long-legged woman (or several), undressed or in fantasy garb and most likely engaged in some kind of detached, woman-on-top sexual cruelty. Saffron Burrows, with her impossibly long neck, stretched fashion-model frame and quicksilver intelligence, has been his muse of choice lately; after starring in "Miss Julie" and "Timecode," she appears here as the mercurial actress playing the doomed title role in Ifans' Dogme film of "The Duchess of Malfi." (With no disrespect to the beautiful Burrows, Figgis should clearly direct the next "Lara Croft Tomb Raider" sequel -- how could he possibly resist the chance to shoot Angelina Jolie in action?)

It seems unfair to criticize an aspect of someone's art that so clearly derives from genuine personal obsession, like Hitchcock's thing for icy blondes. But sometimes the panoply of skinny-women erotica in a Figgis movie starts to have the artful, languid, bored feeling of a mid-'70s shoot for Italian Vogue. We get not only the aforementioned Burrows rape scene but also a couple of interludes involving Chiara Mastroianni as a lesbian seductress and a scene in which a prostitute dips her breasts in glasses of milk for a client's enjoyment. It might seem unmanly of me to complain -- there are too many naked chicks in this movie! -- but the campy, decadent Euroness of it all starts to seem comical, and I feel pretty certain that's not what Figgis intends.

On the other hand, if you're ready to roll with "Hotel" and take what it gives you, there's some rich entertainment here. Figgis' actors have a high time playing a gaggle of pampered Hollywood divas and then hamming it up in their scenes from the already overripe "Duchess of Malfi." (Part of me wishes Figgis had just made that movie.) I couldn't quite figure out the Malfi-like intrigue through which Schwimmer -- clad in a series of hilarious faux-gangsta outfits -- undermines the artiste Ifans and takes control of the movie (and of Burrows) and I have no idea why Burt Reynolds shows up for one scene, dressed as if he's auditioning for the role of Count Dracula at a Florida dinner theater.

If you're smarter than me, you might be able to figure out whether Figgis' arsenal of framing devices is systematic in some way. Are the creepy, unlit, midnight shots pure fantasy? Are the shots from the "Malfi" film clearly differentiated from the shots from the documentary about the "Malfi" film? But OK, enough. By now you ought to have an idea whether or not you have an appetite for this kind of thing. If 20 percent of the fun these people had making "Hotel" leaks through to the audience, that's pretty good. As I say, it's more a party than a movie. When Hayek, as the third-rate TV entertainment reporter narrating the making-of documentary, interviews Schwimmer, he explains that playwright John Webster was a contemporary of Shakespeare. Hayek nods knowingly throughout his disquisition. "John Webster," she says. "OK, cool. Will we be meeting him later?"