John Stuart Mill's classic is all over the Web, because it reminded us that freedom requires reckoning with "heretical opinions" -- a message we need now more than ever. 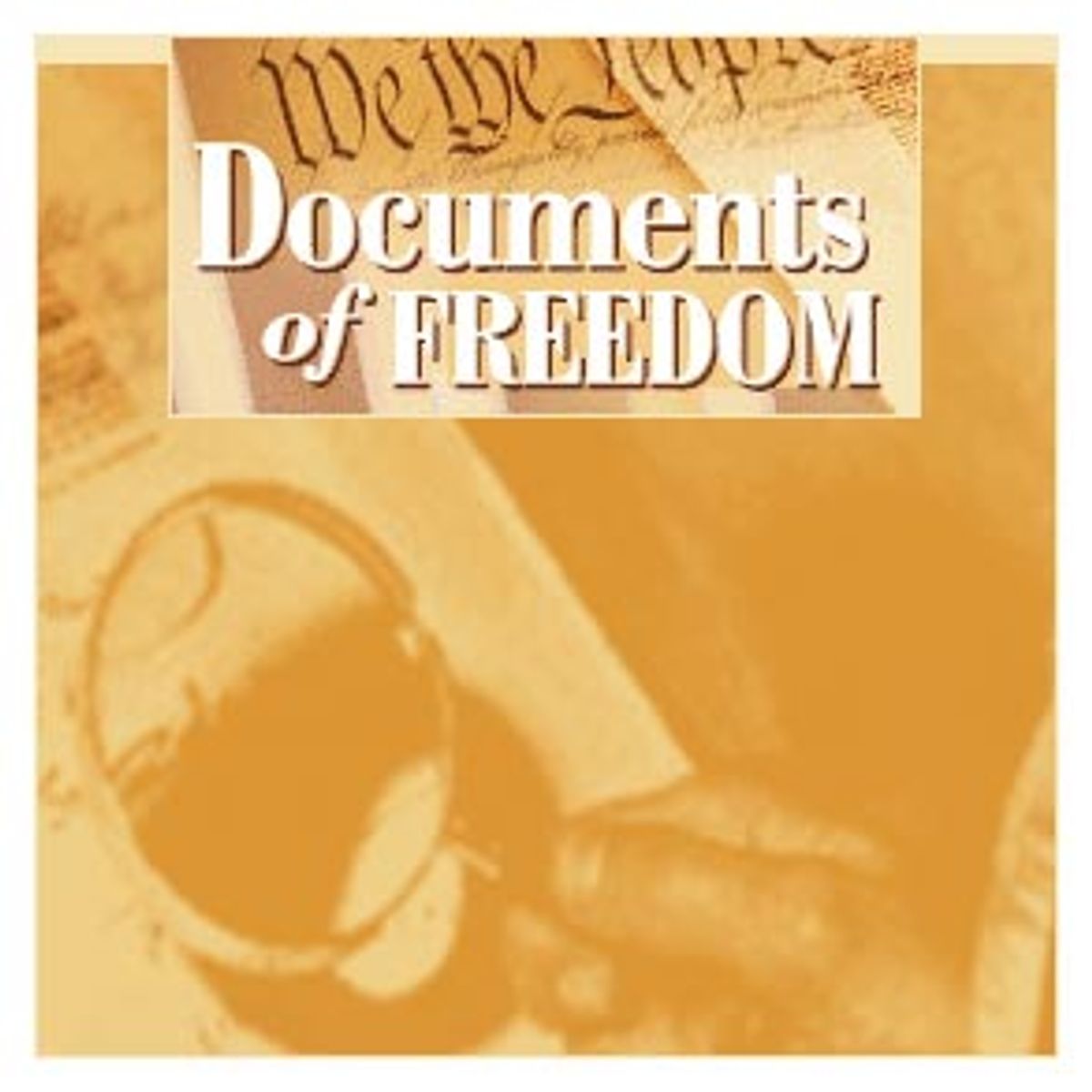 The word "liberty" snakes through the history of modern consciousness like the rattler on a "don't tread on me" flag -- proud, fierce and poised to strike. It has shed its skin more than once, molting one meaning and growing another as the ideas it feeds upon change from age to age. Liberty's reach and its limits -- what it applies to and when, who gets it and why, how we protect it and when we override it -- have evolved according to both vagaries of fashion and rigors of analysis. But each new definition of liberty has arisen not in the abstract but in reaction to some opposing force.

The thinkers of the Enlightenment reached back to the classical era for the Roman Republican ideal of "libertas" because they sought a foundation for civil society apart from royalty and religion. Jefferson, laying out the bases for the 13 colonies' rebellion against the British crown, included it in his celebrated triad "life, liberty and the pursuit of happiness" -- a more ringing variation of Locke's "life, liberty and property" -- plucking the word from the orderly garden of the 18th century philosophers and planting it in wild American soil.

But it fell to John Stuart Mill, in his densely lucid essay "On Liberty" (1859), to give the concept of liberty the shape and scope by which we recognize it today. If the word "liberty" now conjures a vision of unchained minds more than an image of unfettered possessions, we have Mill's persuasive prose to thank. "On Liberty" widened the Victorian liberal conception of freedom from the realm of economics to that of the intellect and the spirit, and no one has ever been able to force it back into the dismal science's bottle.

"On Liberty" is best known for its avowal that "Over himself, over his own body and mind, the individual is sovereign," and it defines its "one very simple principle" as follows: "The sole end for which mankind are warranted, individually or collectively, in interfering with the liberty of action of any of their number is self-protection." This formulation continues today to animate the rhetoric of politics; surely that is Mill's voice echoing through British Prime Minister Tony Blair's recent speech to the U.S. Congress, declaring that the war in Iraq was fought for the freedom "to be you so long as being you does not impair the freedom of others."

But "On Liberty's" importance lies beyond the realm of political theory. The opposing force that elicited Mill's redefinition of liberty was nothing so old-fashioned as an oppressive king. Nor were encroachments on freedom of the press his concern (that argument, he wrote, had been won and need not be revisited, "except during some time of temporary panic when fear of insurrection drives ministers and judges from their propriety"). Mill's eloquence on behalf of liberty was inspired by what he saw as a deadening sameness of opinion infecting his contemporaries. He looked around at mid-century England and saw it filled with "conformers to commonplace, or timeservers for truth." His fellow citizens had become containers of received wisdom, receptacles of "dead dogma."

The antidote to such stagnation, he maintained, was not simply toleration of nonconformists but vigorous engagement with "heretical positions": "The peculiar evil of silencing the expression of an opinion is that it is robbing the human race, posterity as well as the existing generation -- those who dissent from the opinion, still more than those who hold it. If the opinion is right, they are deprived of the opportunity of exchanging error for truth; if wrong, they lose, what is almost as great a benefit, the clearer perception and livelier impression of truth produced by its collision with error."

The only truth worthy of the name, according to Mill, was one that had taken on all comers and grown strong in the fight. Without such "collisions with error," he maintained, truth becomes a flabby weakling. Open-minded truth-seekers must be willing to "throw themselves into the mental position of those who think differently from them." Much of "On Liberty's" rhetorical power stems from the vigorous, even violent language Mill uses to describe this process. While his Victorian counterparts in the church were developing a new notion of "muscular Christianity," Mill was proposing a theory of muscular philosophy.

It was no coincidence that "On Liberty" was published in 1859, the same year that Darwin's "Origin of Species" appeared. "On Liberty's" concept of ideas improving through a process of challenge and response was a sort of intellectual equivalent to Darwin's idea of natural selection. The two visions shared an emphasis on the importance of a wide pool of genes, or ideas, for the process to turn up higher quality results. They also shared a willingness to throw away the crutch of dependence on an infallible supernatural Creator, who might have been believed to provide a blueprint for life or a template for absolute truth. For Darwin and for Mill, no one laid the tracks for life or for truth; they must make their own way.

"On Liberty's" gift to us lies in the clear and persuasive way Mill insists on freedom of thought as the only effective means for keeping the gene pool of ideas well-stocked and ready to generate valuable original notions that can improve the general sum of happiness. Though Mill's intellectual roots lay in the Benthamite utilitarianism by which his father, James Mill, raised him, "On Liberty" shows the younger Mill's determination to broaden the mechanistic tenets of that philosophy into something more organic, even spiritual: "The greatest good for the greatest number," yes, but with "good" defined in terms beyond just the realm of material well-being.

"Human nature," Mill declared, "is not a machine to be built after a model, and set to do exactly the work prescribed for it, but a tree, which requires to grow and develop itself on all sides, according to the tendency of the inward forces which make it a living thing." No one reading that passage who has also read Mill's celebrated "Autobiography" can miss the echo of Mill's repressed anger at his own upbringing -- a creepy experiment in which the elder Mill and his guru, Jeremy Bentham, reared Mill the younger as the perfect utilitarian, a boy wonder primed for intellectual combat but robbed of any chance to be a kid. The process culminated in the young man's emotional breakdown on the threshold of adulthood.

It is perhaps this personal history that lends "On Liberty" its odd mixture of elitism and anti-authoritarianism. The elitism enters with Mill's palpable disdain for the "conformers" who make up the mass of humanity. He argues under the banner of individualism, but he often sounds unconvinced that most people have earned the right to be considered individuals.

This contempt can be amusing -- as in his put-down of "the sort of persons who believe that new truths may have been desirable once, but that we have had enough of them now." More often it leads him in directions jarring to the contemporary reader -- as in the exemption from liberty he readily carves out for "barbarians": ""We may leave out of consideration those backward states of society in which the race itself may be considered as in its nonage ... Despotism is a legitimate mode of government in dealing with barbarians, provided the end be their improvement and the means justified by actually effecting that end."

In this, of course, Mill (who spent much of his life in the employment of Britain's East India Company) was simply a man of his imperialist era. And the philosophy of "On Liberty" is emphatic in its view that every era must accept the inevitability of being revised, corrected and judged by those who come after. If even that emperor of stoic wisdom, Marcus Aurelius, persecuted Christians for their faith, how, Mill asks, can any of us be sure we are not subscribing to some belief or committing some act that the future will condemn?

For Mill, no authority -- no religious establishment, no government entity, no belief or movement or custom or practice -- is above challenge. To refuse to admit the possibility of a belief's being disproved is to fail to give it its best shot at being proved. You can't ever hope to be sure you're right unless you readily admit the possibility you might be wrong.

This stance gives "On Liberty" a decidedly un-Victorian uppityness, an in-your-face hostility toward anyone who uses authority to avoid dealing with questions. It is a challenge worth dusting off any time we are faced with pundits in the media who refuse to face those who disagree with them, or presidents who shun press conferences because they undermine the aura of leadership, or clerics who brook no dissent from a doctrine only they are allowed to interpret. Authority, to Mill, is never assumed -- it can only be earned in the rough-and-tumble of free debate, and requires constant renewal.

It therefore seems appropriate that "On Liberty" should be available, in full text, on so many different Web sites today. A Google search for "Mill On Liberty" turns up an unusually high number of links directly to the entire text of the tract. It stands to reason that the Net would embrace Mill, and not only because his text is now in the public domain: The Internet is the vastest marketplace of ideas that mankind has yet managed to create. It's an unbounded and still growing embodiment of Mill's ideals. The next time you get frustrated at the noise level of Net-style smackdown debate, take heart: That's the din of truth colliding with error, the sound of authority being tested, the commotion of new ideas being forged.