Animal-rights activists claim that low-carb, meat-heavy diets are killing people. Are they raising legitimate health concerns -- or are they just rabid anti-carnivores? 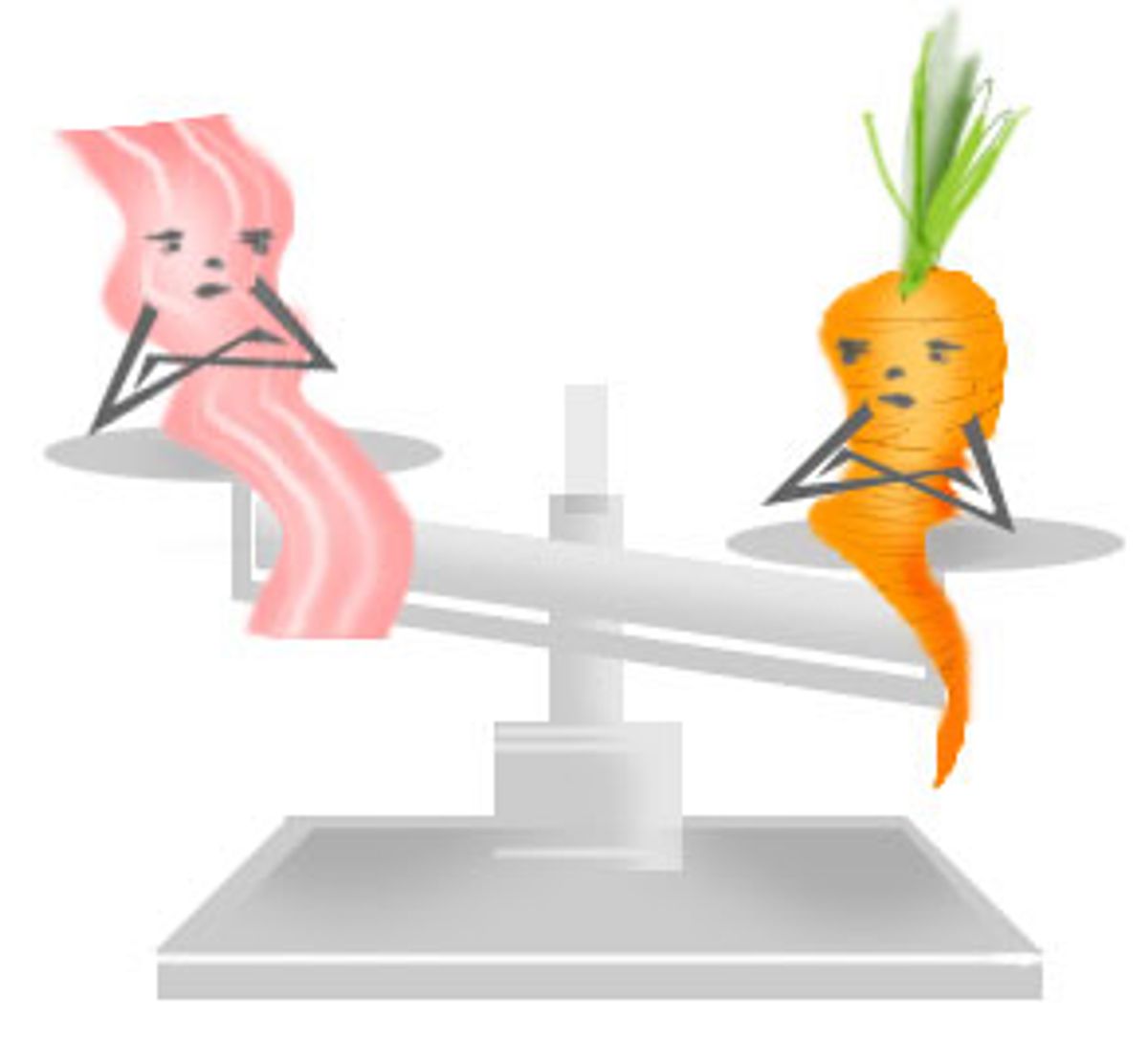 For all the deals with the devil made in Washington, it's not often they're owned up to at the National Press Club, before a roomful of reporters, armed with notepads, tape recorders and TV cameras.

But Jody Gorran, a businessman from Delray Beach, Fla., announced at a press conference on Nov. 20, 2003, "I made a Faustian bargain with the devil."

The trim 53-year-old's dark deal: "I traded a 32-inch waist for heart disease, and the devil was the Atkins diet."

Gorran testified that he had a heart scan six months before going on Atkins that showed no problems. But after two and a half years of losing weight and keeping it off on the high-protein, low-carb diet, while boasting about its incredible benefits to everyone he knew -- eat fat, while you lose the fat! -- he developed heart disease. Suffering from severe artery blockage, he underwent angioplasty to place a stent in his coronary artery.

Gorran shared the podium at the press conference with other self-proclaimed victims of the diet and their aggrieved family members: a 51-year-old hairstylist whose cholesterol went from 160 to 258, suffered kidney stones and had to have surgery to remove her gall bladder; the parents of an overweight 16-year-old from Sturgeon, Mo., who dropped dead from cardio-respiratory arrest at school while suffering from low levels of calcium and potassium in the first days of the diet; the sister of a 41-year-old man from Yardville, N.J., who also died of a heart attack while low carbing.

The master of ceremonies at this media circus of misery was Dr. Neal Barnard, president of the Physicians Committee for Responsible Medicine (PCRM), a nonprofit that promotes the health benefits of vegetarian and vegan diets, and advocates against the use of animals in medical testing and in the training of medical students. As an advocate of "plant-based" diets, Barnard has written several books, including most recently "Breaking the Food Seduction" (St. Martin's, 2003), in which Chapter 4, "Opiates on a Cracker: The Cheese Seduction," asks, "Is cheese a drug?" Oozing with recipes for oven-barbequed tofu steaks and tempeh tostadas, the book also advises dieters how to best fend off "party platters and other torture devices."

Barnard may have considered Atkins, an eat-the-hamburger, not-the-bun approach to weight loss, a bad idea long before his group set up an online registry to record consumer complaints about it. But for vegans and animal-rights activists, for whom meat is as bad ideologically as they believe it is physically, the ever-rising profile of low-carb diets is a major public-relations setback. There may be no consensus on the healthiness of low-carb diets, but there is no denying their increasing popularity.

Meat is back! The magic words "low-carb" are popping up in beer commercials and Weight Watchers products. So clearly, something needed to be done. After a year of soliciting reports from low-carb dieters suffering from everything from gout to bad breath, PCRM collected 188 responses to its informal online survey, and decided to call the press conference to highlight the most heinous among them.

While stressing that the self-reported responses of a self-selected audience on a Web quiz do not constitute a scientific study, Barnard believes that his group has now amassed enough preliminary evidence to justify calling for further research by the feds. "We are asking the CDC [Centers for Disease Control] to go from indictment to conviction," he said at the press conference. "We are calling on the CDC to try to lure Americans away from its honeymoon with the diet that has made its reputation from the fact that it's so counterintuitive -- eat the worst possible food, and lose weight."

As news outlets gobbled up the story -- "Low-Carb, High-Protein Diets Can Be Deadly" and "Doctors Blast Atkins Diet" -- the "Atkins machine," as Barnard refers to the company that's sold millions of diet books, nutritional supplements and low-carb food products to the protein-hungry masses, blasted back. Atkins Health and Medical Information Services issued a statement defending the safety of its diet, and accusing PCRM of seeking to "further its own vegan political and philosophical agenda," while exploiting the "obesity and diabetes crisis in this country."

Was Barnard's press conference less about concern for the health and nutrition of overweight Americans looking to shed those extra 10 or 50 or 150 pounds, than it was about the concern for the beef and pork likely to be consumed by their hungry mouths on a high-protein diet? Had Jody Gorran, the Floridian who'd become convinced that the miracle diet he'd talked up to his family and friends had given him heart disease, just traded one deal with the devil for another? The plot thickens the closer you look -- the only thing for sure is that low-carb diets are becoming a major player in the fight for hearts and minds in a culture-wide struggle over the propriety of eating meat.

"All of us at Atkins are deeply disturbed by PCRM's shameless exploitation of people who have struggled through personal tragedies," the Atkins press release said. "There is no logic and no science to support any association between these individuals and the ANA [Atkins Nutritional Approach], no more and no less than there is logic or science to support an association between the thousands of people who die from heart disease or kidney failure while following a low-fat diet."

In other words: With millions of people on a diet, some of them are going to get sick, and even die, especially if they're already likely to be suffering from the health risks associated with obesity. Should the Atkins diet be made to answer for the sins of the obesity epidemic, when all they're trying to do is help free people from the prison of their extra layers of fat? In short: Don't look at us.

Dr. Stuart Trager, chair of the Atkins Physicians Council, went further, criticizing the Physicians Committee for Responsible Medicine in an "open letter" for eschewing the scientific method, and instead going straight to the TV cameras with its anecdotal evidence that low-carb dieting can kill: "This group of radical vegans and animal rights advocates abusing their medical degrees and masquerading as concerned and 'responsible' physicians must be held to the same standards that all scientists must adhere to, and to cease this practice of sensationalism."

In his letter, Trager cited the research of Dr. Eric Westman at Duke University, which unexpectedly found that cholesterol levels fell on the first six months on the diet, as one example of credible scientific work on the Atkins plan. But Trager conveniently failed to mention that Westman himself had said in a statement upon the publication of his research: "While we're impressed with the weight loss of this diet, we still are not sure about the safety of it. More studies need to be done in order to be confident about the long-term safety of this type of diet."

In turn, Barnard questioned the august credibility of a group of doctors paid to defend a lucrative diet plan. "I understand that they have to say that it's safe because they have a $100 million empire based on that, but the only credible response is to investigate," he said in an interview, adding: "What credibility do the Atkins doctors have? They are paid to do research to sell books. If somebody paid by Atkins wants to questions anyone's credibility, first they should question their own."

But pro-Atkins advocates aren't the only critics of the PCRM press conference. There are others who question the wisdom of taking nutritional warnings about the dangers of eating meat from a press conference set up by a group that works against animal testing.

"They are committed advocates against use of animals in any way, shape, form or manner, so they're not objective," says Robert Baratz, an internist in private practice in Boston, who is president of the National Council Against Health Fraud, a nonprofit that fights medical quackery. "And they are strongly allied with, if not a front organization for, PETA (People for the Ethical Treatment of Animals), but they don't let it be known that that's the case, and that's deceptive."

Jeff Kerr, general counsel for PETA, says that his organization has made some donations to the Physicians Committee for Responsible Medicine in the past to support "areas of mutual interest," and Barnard, who writes the "Dr. in the House" column for PETA's Animal Times magazine, has served as a medical advisor to the group. "But to suggest that there is anything else there is simply ludicrous."

Barnard says his group has a team of doctors and registered dieticians on staff, as well as about 5,000 doctors as members, and more than 100,000 other "supporting" members. And while he may agree with many of PETA's stances, he denies that he's the lab coat and stethoscope puppet for its animal-rights ideology: "I think that PETA has done a great job in many ways of encouraging people toward healthier diets," he says. "Your coronary arteries don't care why you stop eating meat. Having said that, we're not a front for them, or they for us."

The organization that has gone the furthest toward trying to smear PCRM as a bunch of unscientific PETA-sympathizers is the Center for Consumer Freedom, made up of paid flacks for the restaurant industry. The organization's strongly worded accusations about the group Barnard leads are one of the first things to come up after even the most cursory Google search.

But the Center for Consumer Freedom, which has received funding from Tyson Foods and the National Cattlemen's Beef Association among others, is hardly in a position to accuse other organizations of being front groups, says Laura Miller, associate editor of Prwatch.org, a project of the Center for Media and Democracy, which has done investigative work on the organization and its founder.

"They're an interesting group because they illustrate how corporate money is funneled into these front groups that help confuse issues. They're hired P.R. hacks basically working for the industry to promote the industry's viewpoint. Their job is really to attack any organization or anyone who says that maybe Americans shouldn't eat so much meat."

The Atkins camp has long viewed mainstream nutritionist putdowns of its diet with suspicion, but some specialists without any direct ties to the health industry or the "plant-based diet" promoters, are adamant that the Atkins diet simply isn't well-balanced.

Dr. Jeanne Goldberg, director of the Center on Nutrition Communication at Tufts University, a dietician with a Ph.D. in nutrition, suggests taking a look at the current issue of the Tufts University Health and Nutrition Letter, which tries to answer the question: "Is it possible to follow the Atkins diet healthfully?"

And while she dismisses "many of the arguments that the Physicians Committee for Responsible Medicine makes" as "not grounded in good science," she is unflinching in her impatience for those who tout the health benefits of Atkins: "Here's my take on it: It's not a balanced diet. A diet which tells you that you really can't eat all fruits and very few vegetables is not a healthful diet."

That's not to say that you can't lose weight on the diet, as millions have done and continue to do. "What the data show so far is that people can lose weight on anything from the most sensible balanced diet to the Atkins diet," she says. "The problem comes in terms of maintenance. The Atkins diet as a maintenance diet is really a poor idea, because it is high in saturated fat and low in other essential nutrients. It isn't about losing weight. It's about keeping it off."