Revolt of the Goldwater conservatives

In Arizona, home of American conservatism's feisty icon, independent-minded voters may have a nasty surprise for George W. Bush. 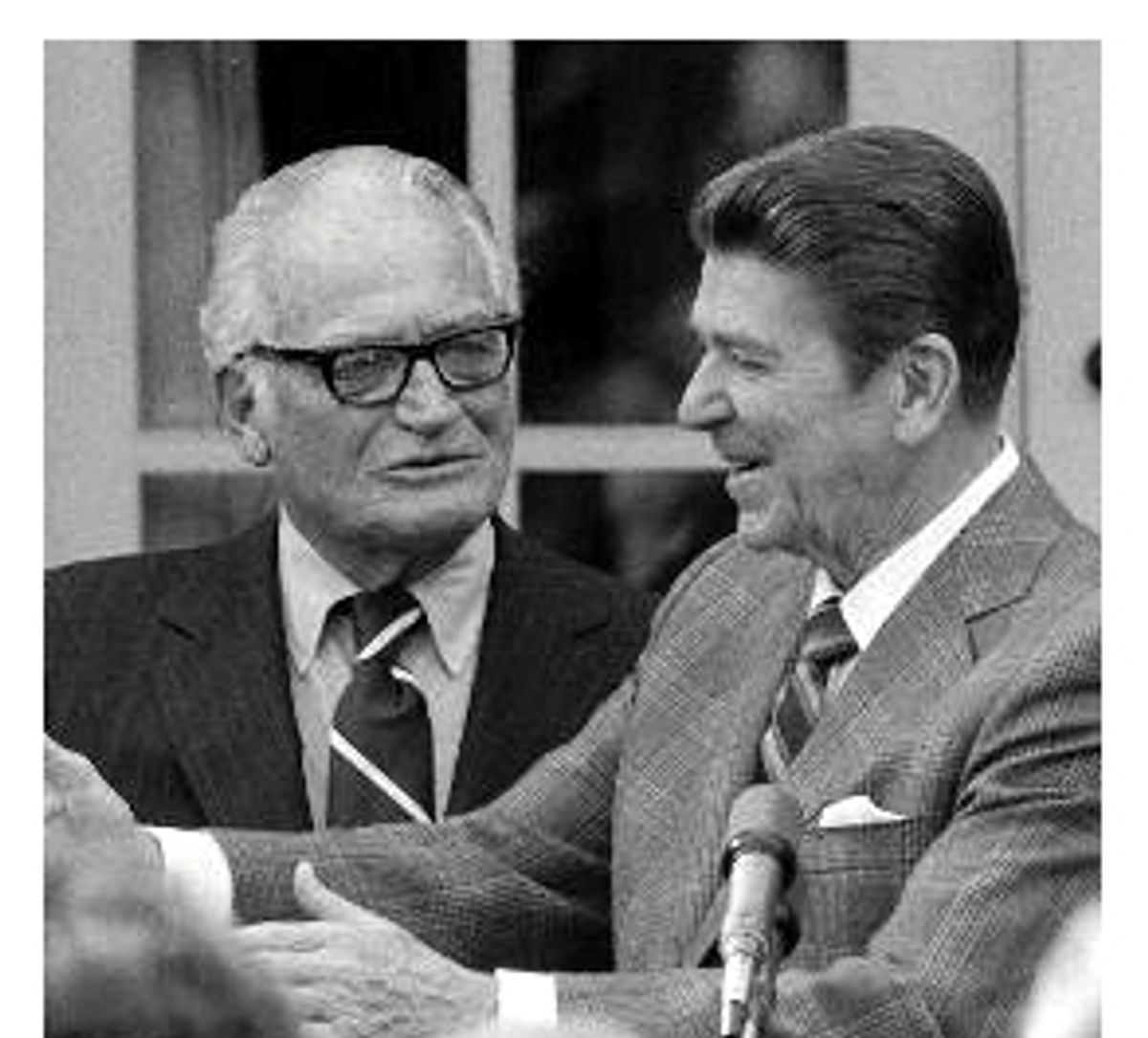 Barry Goldwater was the alpha of the conservative movement, his capture of the Republican Party nomination in 1964 prophetic. "Extremism in the defense of liberty is no vice. Moderation in the pursuit of justice is no virtue." Even in defeat came the promise of ultimate triumph when Ronald Reagan appeared in a last-minute television appeal, the moment launching his political career. George W. Bush presents himself as Reagan's true heir down to his cowboy boots, not the scion to his wing-tipped Eastern patrician father.

It was Goldwater, the genuine article, who established the image of conservative as Western hero. His persona was indistinguishable from his ideology. He was the imperial individual, the free spirit embodying the free market. He seemed a natural force in Arizona, a state on the economic frontier. With less than a million inhabitants before World War II, it exploded afterward. In his time, Goldwater appeared as new and startling as the booming suburbs in the desert.

Yet in his older years the founding father of conservatism gazed out upon his works and recoiled. It was not, after all, what he had had in mind. In his plainspoken manner, indifferent to what anyone else thought, he railed against the right's intolerance, sanctimony and bullying. Mr. Conservative, author of its early seminal manifesto, "The Conscience of a Conservative," took to calling himself in public a "liberal." He spared no words in denouncing the right as the enemy of liberty.

"Barry was always a social liberal," Susan Goldwater Levine, his widow, keeper of the flame, told me at her home, high in the hills above Phoenix, watching a pastel sunset, in 70 degree winter weather. "Barry believed that people should be allowed to do whatever they wanted in their own homes." When Goldwater observed the right trying to use government to enforce private morality, he spoke up for women's right to abortion and for gay rights. His wife insisted that his convictions had remained unaltered, but that the movement for which he was the avatar had become warped. "He hated it that the right-wing zealots took over the party," she said. "Barry hated the right wing."

Perhaps, it might be argued, the widow Goldwater speaks for a man who can no longer speak for himself. But it is inarguable that Arizona, bastion of conservatism, along with other neighboring states in the Southwest, New Mexico and Nevada, which far more than those of the Deep South are the battleground in the presidential election, may vote Democratic.

Arizona has been a real estate developer's paradise -- a low-tax haven, where social services are starved and the state Legislature is ruled with an iron fist by the Republican religious right. It might seem counterintuitive that it could go Democratic. But the Democratic governor, Janet Napolitano, told me, "Yes, we can win Arizona." She takes her own election as a token of things that might come. Napolitano is a former Clinton appointee as U.S. attorney and was elected Arizona's attorney general; she is young, energetic and politically adroit. The contradictions of conservatism that have led to her becoming governor are now widening.

In 2000, Al Gore waged no campaign whatsoever in Arizona, conceding to its reputation, and still Bush barely won with only 51 percent. Then Napolitano won in 2002. A quarter of Republican women, disgusted with the right's social policies, voted for her. Napolitano believes that moderate women are the crucial swing constituency not only in Arizona but nationally.

Moreover, Hispanics, now about a quarter of the total population and rapidly growing, overwhelmingly vote Democratic as they register. The immigration wave is uncontrollable at the border. Attempting to remove the acrimonious issue of immigration by proposing temporary legal status for undocumented workers, Bush has instead increased discontent on all sides while satisfying no one. His plan "has at least opened up the subject for dialogue," Napolitano said. Its political effect is unintended. Hardcore Republicans are angry with him and Democrats have been given safe political ground to discuss the issue.

Meanwhile, the Arizona state Legislature is led by the draconian House Speaker Jake Flake from the town of Snowflake. When one moderate Republican representative voted for the governor's program for basic children's services he was stripped of his committee chairmanship. The conservatives at the Statehouse are known as the "Kool Aid Drinkers," after the Jonestown religious cultists who committed mass suicide, while the few remaining moderate Republicans call themselves the "Mushroom Coalition" -- kept in the dark and covered with excrement.

Napolitano suggests that the Republican right's one-party arbitrary power in government and its authoritarianism toward women and minorities are an appeal to the independent streak among Arizonans that can only favor the Democratic candidate. It is the same sentiment that once created Goldwater, now supports the Republican maverick John McCain, who holds Goldwater's seat in the U.S. Senate, and may flow in new directions that Goldwater himself may have anticipated. In his old age, he continued to play the prophet. Will Goldwater's legacy of liberty turn on Bush, who is campaigning as its fulfillment? In this Tombstone, Bush may find himself at the wrong dusty end of the OK Corral.