Has Bush no shame?

Relatives of 9/11 victims say the president's new ad campaign desecrates ground zero -- and demand that he pull it off the air. 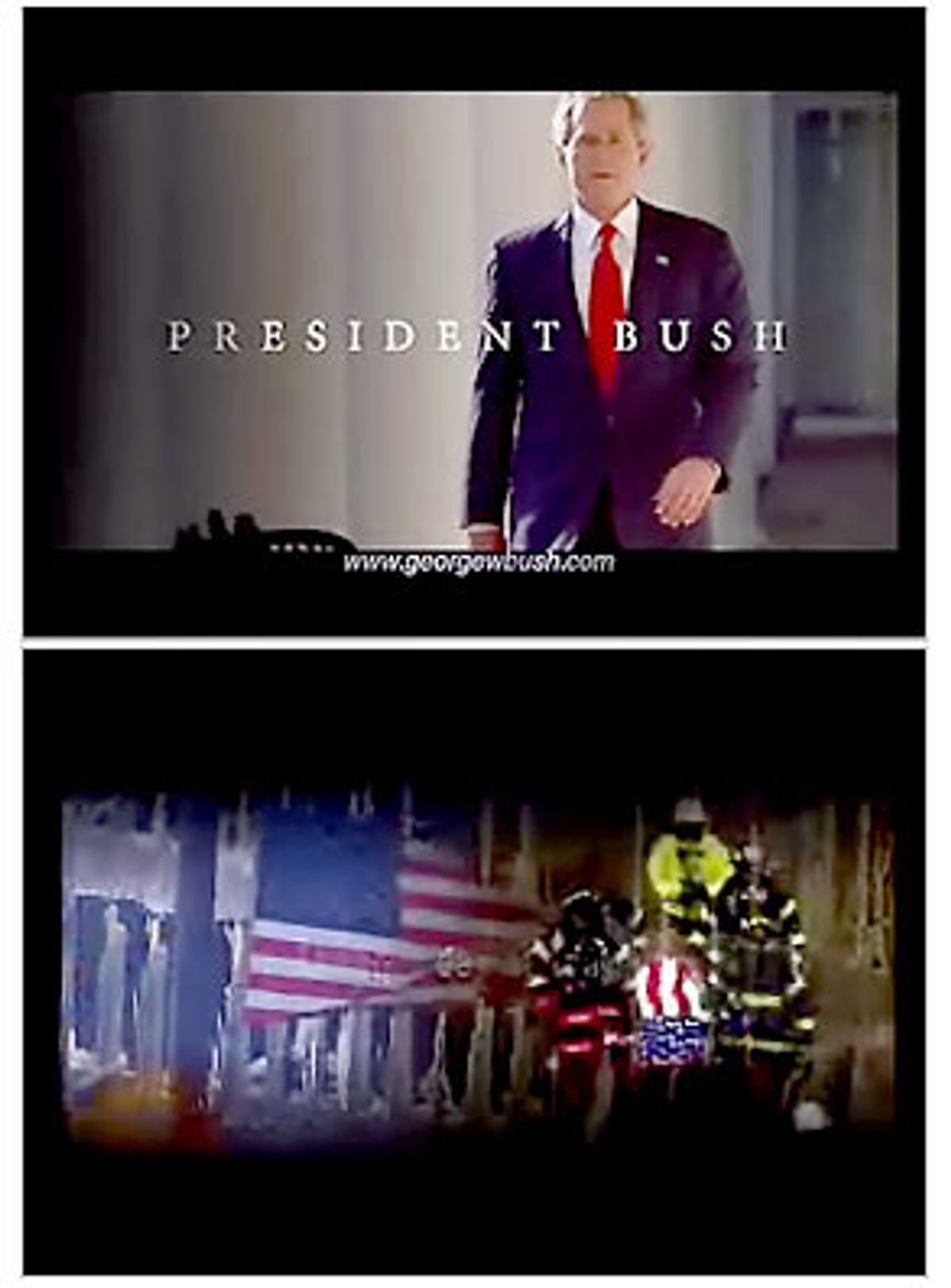 Andrew Rice, like many 9/11 family members, is speaking out against campaign commercials for President Bush that use television footage from the place where his brother died. Ground zero, fallen firefighters, the torched and toppled remains of the World Trade Center -- these images are sacred to Rice, and he doesn't want them used as fodder for anyone's political gain. "Taking images, sensitive images, like those firefighters carrying that coffin -- that's a dead body in that coffin," Rice said. "It's not Gettysburg 100 years after a battle. They are real firefighters carrying a dead body. That should be hands-off."

But Bush's spokeswoman and longtime advisor Karen Hughes told Rice and other family members on Thursday that they are plain wrong to be incensed that Bush-Cheney '04 is using 9/11 footage in a multimillion dollar ad campaign. "With all due respect, I just completely disagree, and I believe the vast majority of the American people will as well," she said in a television interview.

And those who disagree with her and the White House clearly have an agenda, Hughes says. They must be partisan. They must be Democrats. "I can understand why some Democrats might not want the American people to remember the great leadership and strength the president and first lady Laura Bush brought to our country in the aftermath of that," Hughes said.

Not all of the 9/11 families who oppose Bush's use of their greatest personal tragedy to win votes are Democrats, of course, although many will likely choose not to vote for Bush in the fall if he keeps this up.

Wright Salisbury of Boston, whose son-in-law Ted Hennessey was a passenger on American Airlines Flight 11, called Hughes' comments that it's Democrats opposing the ads "a load of baloney."

"I have no idea what the political affiliation is of people I've been talking to," he said in an interview Thursday. "I was a Republican up until I voted for Bush. I will still vote for a good Republican, but not for Bush. To say this is Democrats doing this is another damn lie."

If Bush and the Republican Party want a war of words with the 9/11 families, they're well on their way. While the survivors and victims of the tragedy fall across a wide political spectrum -- and a few have already emerged to support Bush and his ad campaign -- leaders of 9/11 family groups, as well as politically influential firefighters groups, say his exploitation of Sept. 11, coupled with his stonewalling of the investigation into the attacks, will rouse them to political action. And that could spell trouble for Bush, who's making 9/11 the centerpiece of a campaign based largely on national security.

Sept. 11th Families for Peaceful Tomorrows, a group that represents more than 100 family members and opposes Bush's military responses to the terror attacks, has scheduled a news conference for Friday morning near ground zero, where leaders will call on Bush-Cheney '04 to pull the ads. The group is demanding that Bush stick to his word that he has "no ambition whatsoever to use [9/11 or national security] as a political issue," as he said soon after 9/11.

But it looks like the Bush campaign isn't backing down. On Thursday, the campaign issued a statement from former New York City Mayor Rudolph Giuliani supporting the use of the 9/11 video.

Families for Peaceful Tomorrows says its members include 9/11 survivors of all political stripes, and insists that it would protest any exploitation of the terror attacks from any party. "If Kerry were doing this or any other politician, we would feel the same way," said Kelly Campbell, a co-director of the family group, whose brother-in-law Craig Amundson was killed on 9/11 at the Pentagon. "This is not about partisan politics. We have people in our group who vote for President Bush, we have people in our group who are Green Party and Democrats. Frankly, we don't want to have to deal with this as a partisan political issue. Unfortunately, the president has decided to run these ads and Republicans have decided to implicate Sept. 11 in their campaign and convention."

For some 9/11 families, the Republican Convention in New York, scheduled later than usual this year to coincide with the third anniversary of the 9/11 attacks, is the true test of how far Bush will go to exploit their tragedy. From what they've heard, they're expecting the worst. News accounts have suggested Bush has plans to travel to ground zero during the convention, perhaps to give his acceptance speech, just as he used an aircraft carrier to prematurely proclaim the accomplishment of his mission in Iraq. Some family groups are already planning their response to this use of ground zero as a campaign backdrop. According to Rice, the GOP's plan to exploit ground zero this fall will motivate some 9/11 families to join the estimated 1 million protesters who will descend on New York in early September.

"There will be heavy-duty mobilization of people," he said. "Those who voted for him four years ago will say 'Hold on.' Obviously, he'll have support among some people, but he's really galvanizing the 9/11-affected communities."

Salisbury, for one, vows to march on New York if Bush dares to appear at ground zero during the GOP Convention. "If he does anything like show up at the World Trade Center, if he even shows his face, he will enrage every family member of the victims, whether a Republican or a Democrat. I'm not a marcher, but I will march if that happens. If he threatens to appear at the World Trade Center, I'll go down and be one more face in the crowd."

Bush's effort to co-opt 9/11 may enrage many closest to the tragedy -- and many who reside nearest the sites of attack -- but clearly they aren't the audience for the advertising. The ads are airing in 17 battleground states -- and not in the New York area. In those areas, as Hughes suggests, the ads may sit well with many Americans.

Rice fears that many voters in Oklahoma, where he lives, will approve. "I'm not critical of people who live in the middle of the country. They work hard all day, come home, but they don't come home and get on the Internet and educate themselves on issues," he said. "They trust the president; they'll be very moved by those images -- the flag and the busted-out windows. Karl Rove knows it's all about images. Let's get people emotionally, speak to the lowest common denominator -- like he's got some sort of special ownership over this."

While 9/11 family groups say they'd criticize any candidate who plays politics with the terror attacks, Bush is, still, a special case. It does make a difference that he is the one plastering images of ground zero into a video montage. It's Bush, after all, who has stonewalled the independent commission investigating the 9/11 attacks. The White House has consistently failed to cooperate with the panel. The White House fought creation of the commission, and caved only under pressure. Bush didn't want to appear before the commission to divulge what he knew before the attacks. His latest offer, rejected as not good enough, was to speak for only an hour, and only to two people, the chairman and co-chairman. The panel just barely won a 60-day extension of its probe, and National Security Advisor Condoleezza Rice won't agree to testify in public.

Bush's failure to cooperate with the commission only stokes the families' anger. Andrew Rice called it hypocrisy. "On the one hand, he wants to use 9/11 for political gain, but he's not even cooperating with the commission. There is pretty extreme bipartisan cooperation for the commission. Rice won't testify, but Sandy Berger [Clinton's national security advisor] will. Clinton and Gore will. We're looking for balance on both sides."

The firefighters, too, have their substantive beefs with Bush. The same president who has used firefighters' images to promote himself has also made cuts in fire-fighting programs that have infuriated the International Association of Fire Fighters. Now the group has passed a resolution calling on the president to pull the ads.

"Since the attacks, Bush has been using images of himself putting his arm around a retired FDNY firefighter on the pile of rubble at ground zero. But for two and a half years he has basically shortchanged firefighters and the safety of our homeland by not providing firefighters the resources needed to do the job that America deserves," said the group's general president, Harold Schaitberger. "The fact is Bush's actions have resulted in fire stations closing in communities around the country. Two-thirds of America's fire departments remain understaffed because Bush is failing to enforce a new law that was passed with bipartisan support in Congress that would put more firefighters in our communities." Schaitberger, it's worth noting, is a John Kerry supporter, and the IAFF endorsed Kerry.

Retired New York firefighter Tom Ryan also feels betrayed by the president. Ryan was off duty on Sept. 11, 2001, but he watched the planes hit the World Trade Center on television at home and was at the scene by 11 a.m. Like so many firefighters, he worked 24 hours at a time for weeks after the attacks. And like so many firefighters and others who spent too much time near ground zero when it was still a burning pile, the heroic work has left him with breathing problems.

Ryan is outraged that Bush and his Environmental Protection Agency said the air was safe at ground zero. "They lied to us," he said. "They told us it wasn't that bad down there. We lost 3,000 that day but thousands and tens of thousands will be affected by the air quality. No one could have protected us from that, but you could also have not lied about it."

That's why it's especially galling for so many to see Bush making 9/11 the centerpiece of his campaign. When they needed him, he wasn't there. Now he needs them, or at least the image of their tragedy, to win. And it's painful.

"It's hard to explain this burning in my pit that goes on," said Ryan, trying to describe how he felt when he saw the use of the firefighters' image in the Bush-Cheney ad. "It's hard to put that into words sometimes. You'd have to be stupid to say this wasn't going to go on. This is probably going to be the ugliest campaign we've ever had in this country. It's going to be coming from both sides, Republican and Democrat, and I guess if you don't have both sides questioning from different angles we'll never get to the truth. It's like going through a divorce: A woman tells her side of the story, a man tells his side of the story and the judge has to decide. We have to be the judges."