Max Cleland tells Salon: It's "the band of brothers against the slime machine." 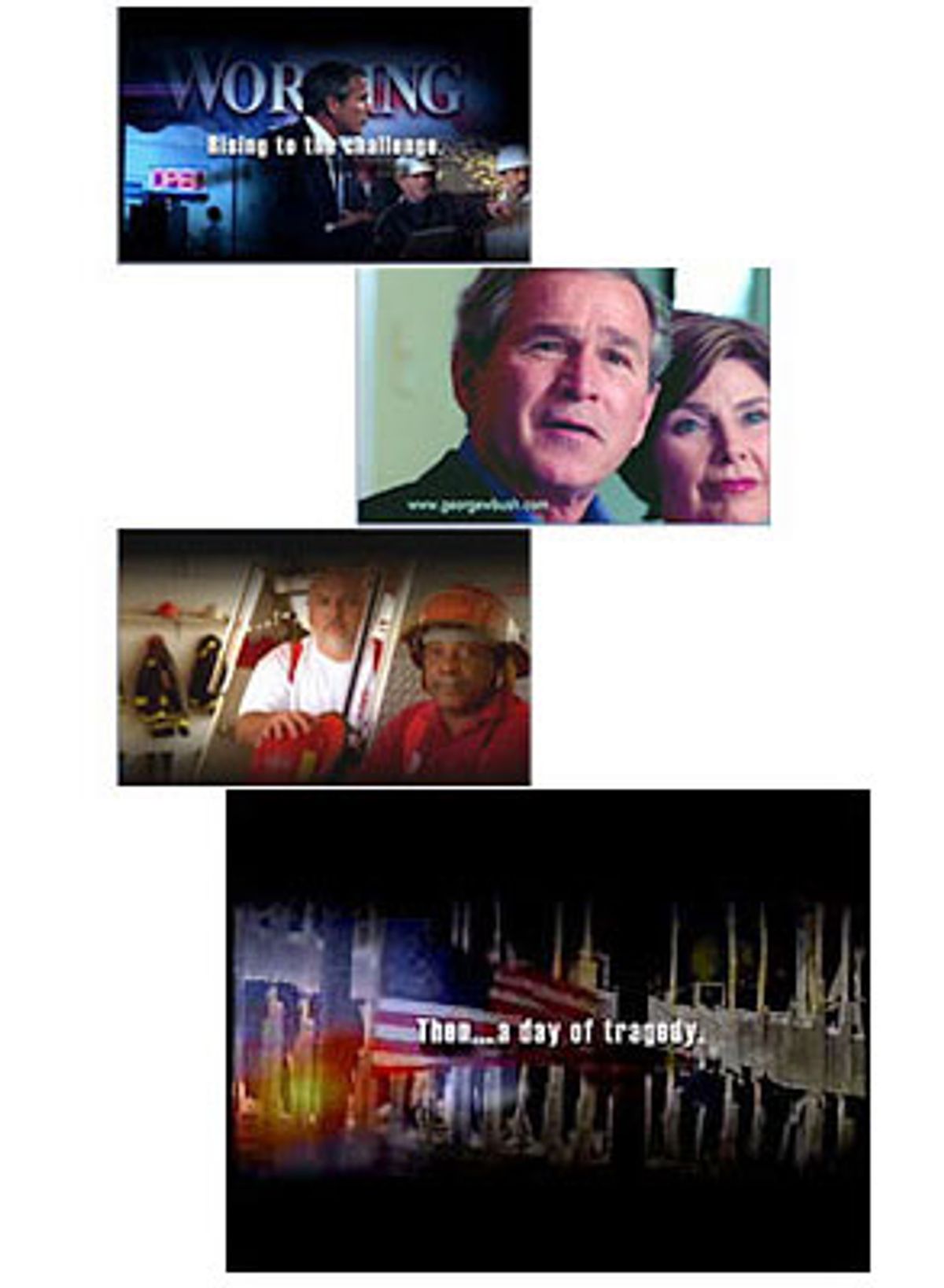 "Lucky me, I hit the trifecta," said George W. Bush in the immediate aftermath of 9/11, according to his budget director. War, recession and national emergency liberated him to soar in the political stratosphere. But after several faltering starts this year, he felt compelled to relaunch his campaign with $4.5 million in television ads in 16 key states. In 60-second commercials he would lock the sequence of recent history into the American mind, his narrative of his presidency as he wished it to be understood. Suddenly, images of 9/11 cascaded on the screen: firefighters carrying a flag-draped coffin at ground zero juxtaposed against another firefighter raising the flag. Bush's slogan: "Steady leadership in times of change."

"Where the hell did they get those guys?" responded the president of the International Association of Fire Fighters. It turned out that the "firefighters" in the Bush ads were hired actors -- "cheaper and quicker," explained a Republican Party spokesman. Enraged members of the 9/11 Widows' and Victims' Families Association vented against Bush's ads, calling them "disgraceful" and "hypocritical." While he used the flag-draped coffin, he refused to allow the press to photograph coffins of U.S. soldiers returned from Iraq. What's more, he was "stonewalling" the official 9/11 Commission, as Sen. John Kerry put it, adamantly holding back crucial documents, refusing to allow National Security Adviser Condoleezza Rice to testify in public, and limiting his own testimony to an hour.

A few weeks earlier, Bush had remarked, "I have no ambition whatsoever to use [the 9/11 attacks] as a political issue." Now an administration spokesman defended his ads as "tasteful." After Bush's ads ran, an Oklahoma Republican congressman, Tom Cole, stated the rank and file's political conventional wisdom: "I promise you this, if George Bush loses the election, Osama bin Laden wins the election, it's that simple."

Sept. 11 was to be Bush's "waving of the bloody shirt," a strategy Republicans used in post-Civil War presidential campaigns for more than 30 years against the Democrats who were still tainted by the Confederacy. But firefighters and victims' families are critics he cannot debate. And the judgment of public opinion has been a terrible, swift sword. Fifty-four percent said his use of 9/11 imagery was inappropriate and only 42 percent, his base, said it was appropriate, according to the Washington Post-ABC News poll. Worse, Kerry has plunged ahead. Even worse, 57 percent want a "new direction."

The rejection of the central element of Bush's version of his story is an unexpected shock to him and the Republicans. "I am amazed they have been thrown on the defensive," James Pinkerton told me. Pinkerton was research director for George H.W. Bush's 1988 campaign and responsible for developing the "Massachusetts liberal" attack lines against Bush's Democratic opponent. "They weren't ready for any of it," he says of this Bush campaign. "They just assume it's all pro-them on 9/11. It didn't dawn on them it cuts different ways. If they aren't ready for this, what are they ready for?"

The trauma of 9/11 has been squandered as a political factor. It is not merely a case of imagery. Just as Bush has misspent the goodwill of the world, he has wasted his opportunity to create any consensus at home. He had planned to run his campaign on the Bismarckian formula of the primacy of foreign policy and kulturkampf. But his "trifecta" has been turned upside down: David Kay's confession that "We were all wrong" on WMD in Iraq; job stagnation; increased recriminations about 9/11 as the commission begins its work in earnest. Bush, moreover, is patently using 9/11 not for "changing times" but to advance his reactionary social agenda. Rather than appearing "steady," he is setting himself against change, including changing his own policies. What he has left is a negative campaign. If he cannot elevate himself on the presidential pedestal he must throw himself into the abattoir of the culture war.

Losing control of Vietnam to Kerry was a predicate to Bush's loss of control of 9/11. "Kerry has been draping himself in Vietnam," said Pinkerton. "Why aren't all wars off the table? Who's using the bloody shirt in this campaign?"

For decades, the Republicans used Vietnam to cast the Democrats as soft on communism. But the war hero trumps the National Guardsman who went absent without leave. Kerry's most fervent campaigner, former Sen. Max Cleland, who lost three limbs in Vietnam, is his veritable "bloody shirt." Cleland was defeated in a race in 2002 when the Republicans ran a TV ad conflating his picture with Saddam Hussein's and Osama bin Laden's. Cleland is the personification of more than Kerry's war bona fides; he is a living witness to negative Republican tactics.

"They have been shown to trash anyone, anywhere, anytime," Cleland told me. "They seek to slander a noble veteran's record who was wounded and the only member of his division in the Navy who won a Silver Star. Use 9/11? Have they no shame? Listen, John Kerry knows that the slime machine is targeting him and his family. We discussed this before the race -- somebody's got to fight. That's the way it's turning out, the band of brothers against the slime machine."