Even if you think you're wise to Fox News' right-wing agenda, Robert Greenwald's "Outfoxed" will leave you very afraid. 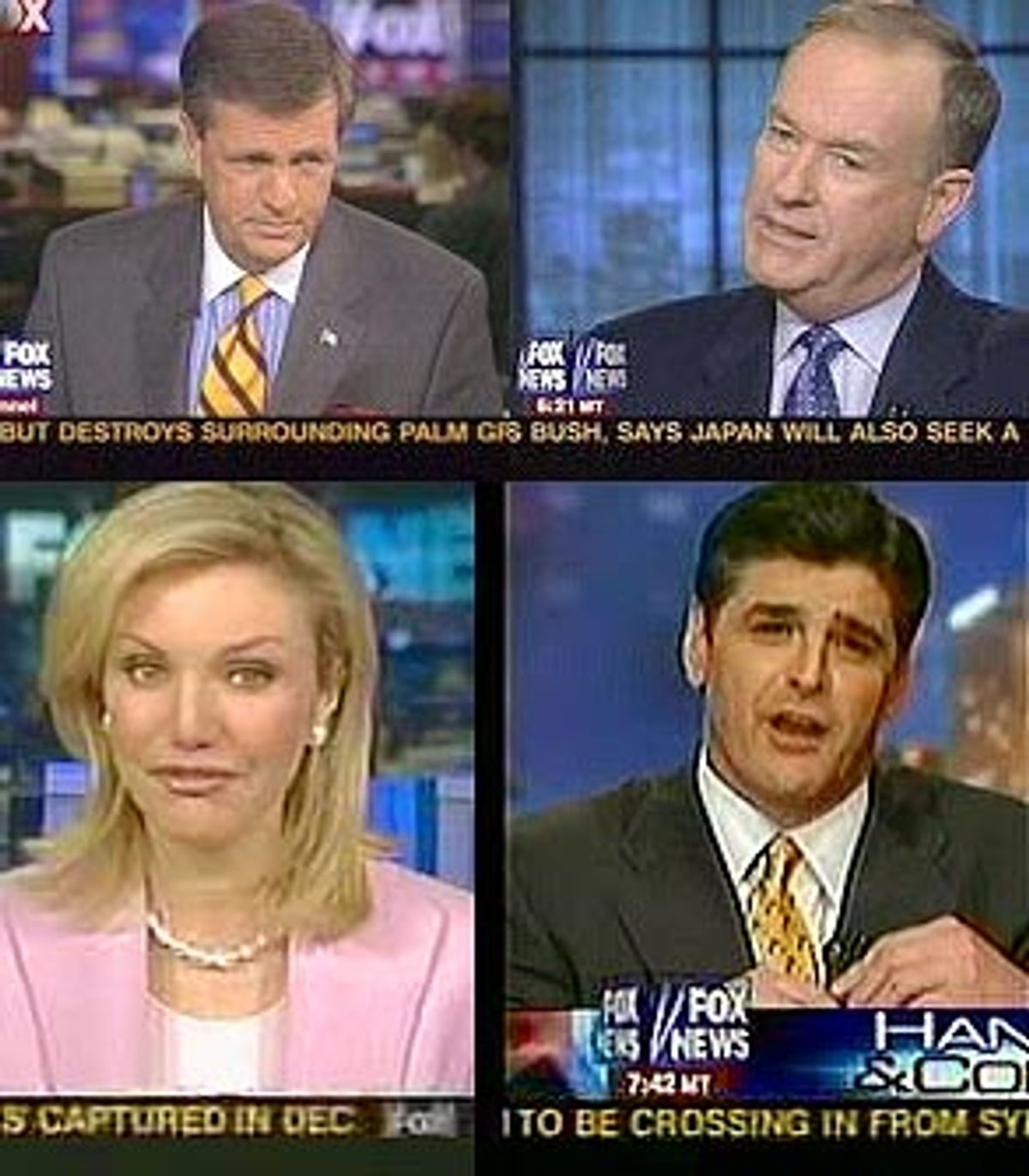 I'm a neutral observer, of course, here to give you a fair and balanced report. But some people would say that Fox News Channel is nothing more than the private right-wing propaganda machine of a sneaky right-wing billionaire who is -- now these are just the facts, people -- not an American at all but some kind of Down Under, funny-accented, shrimp-on-the-barbie-eating, crocodile-hunting, profoundly un-American Australian, for goodness' sake.

And while I know Australia is not obviously very much like France -- treasonous, untrustworthy France -- let's look under the surface a little, OK? Do you know what one of Australia's top agricultural products is? That's right, it's wine. Draw your own conclusions, people, that's all I ask. And when you get right down to it, isn't there something French about Shep Smith, if you know what I mean? Isn't that "mousse" in his hair? Does that sound like an American word to you? Isn't there something about him that suggests the French government of, say, 1943? Something a little Vichy French? Nazi-collaborator French, possibly? I don't know, I'm only asking. You decide.

Maybe you think my parody of the methods employed by Fox News itself (yes, French and Australian readers, that's what it is -- please delete those partly composed e-mails) is a few truckloads too broad. After you see Robert Greenwald's documentary "Outfoxed: Rupert Murdoch's War on Journalism," you might change your mind.

Unlike "Fahrenheit 9/11" and "Control Room" and "The Corporation" and the rest of the films in the Great Left-Wing Documentary Onslaught of 2004, you won't see "Outfoxed" in theaters, or at least not yet. Like Greenwald's 2003 movie, "Uncovered: The Whole Truth About the Iraq War" (which actually will reach theaters soon, in an updated and revised version), it's being distributed by way of a grass-roots guerrilla marketing campaign that bypasses traditional venues entirely. "Outfoxed" premieres Tuesday at the New School in New York, and in coming days MoveOn.org and the Center for American Progress will be sponsoring roughly 2,000 house parties to screen it. (You can buy your own DVD or VHS copy through the film's Web site.)

It's not so much the fact that Fox News openly and sharply skews to the right, or, more accurately and more depressingly, that it parrots the Republican Party line. Unless you're just now getting cable or you live in Madagascar, that's not news. After all, there's something to be said for political frankness. I've always admired the way British newspapers wear their allegiances on their sleeves, and there's nothing duplicitous about it; all readers know that the Guardian favors the Labor Party and the Daily Telegraph supports the Conservatives, and they read those papers with appropriate ideological filters in place. I mean, hey, you're reading Salon right now; while we present a plurality of views and don't (I hope) march in lockstep with anyone, we make no pretense of political neutrality.

It's not even that Fox News commentators have suggested that John Kerry was the favored presidential candidate of the North Korean dictator. It's right there in "Outfoxed": An anchor on the morning show cheerily burbles, "Hey, [Kerry's] got Barbra and Kim Jong Il on his side -- what could go wrong?" "Yeah," chirrups the bimbette on his left, "North Korea loves John Kerry!"

Nor is it that the network found a way to turn the question of whether Kerry looked and acted French into a quasi-legitimate news story that played for several days. (At one point they interviewed some appropriately tousled-looking French philosopher, who agreed that oui, M'sieur Kerry had the attitude and demeanor of a leisure-class Continental, rather than the hardworkin' Texas rootsiness of his fellow Yale man, George W. Bush.)

When you watch Greenwald's barrage of pirated Fox News footage -- his filmmaking techniques are clearly testing the outer limits of the "fair use" doctrine, and may yet land him in court -- it's an overwhelming experience well beyond the hoot-inducing moments. Uprooted from the happy everyday babble of cable TV, the network looks more and more like a total propaganda system: Murdoch and his drones have created a dense and sophisticated weave of sound and image, drenched in the American flag and overloaded with authoritative-seeming info nuggets, whose exclusive goal is the dissemination of fear, confusion and disinformation designed to serve the ends of the governing regime.

As media critic Robert McChesney says in the film, it is much easier to propagandize a public that believes in its own freedom, and does not expect propaganda, than it was in a Soviet-style system where people were always suspicious of official pronouncements. In that context, it's no longer accurate to haul out the tiresome leftist chestnut and refer to a development like the rise of Fox News as "Orwellian." It's subtler, lusher, more sweeping and far more effective than anything Orwell ever imagined.

As discussed in Robert S. Boynton's story in Sunday's New York Times Magazine, Greenwald made "Outfoxed" fast, cheap and in near-total secrecy. Fearing that Murdoch and company would throw millions of dollars worth of lawyers at him if he revealed his intentions, the director never asked Fox to respond directly to charges made in the film by critics and former employees. As Howard Kurtz of the Washington Post points out in a recent column, this is definitely the film's major weakness. While Greenwald includes some public ass-covering statements from Murdoch and Fox News head Roger Ailes, "Outfoxed" really offers no rejoinder to the harsh criticisms voiced by left-leaning usual suspects such as McChesney, Eric Alterman, David Brock and Jeff Cohen (a former Fox News contributor and the co-founder of Fairness and Accuracy in Reporting).

Predictably, Murdoch's minions are striking back rapidly with a counter-P.R. campaign of its own, essentially claiming that the Times, MoveOn and lefty billionaire George Soros were mounting a concerted attack on the reputation of Fox News. There may be a germ of truth, or half-truth, to this charge, but that only speaks to the unbridgeable chasm that seems to be dividing the nation's media class; the outrageous partisanship (and immense success) of Fox News has made even the great, gray Waffle House that is the New York Times seem like a bastion of snail-eating socialism by comparison.

Furthermore, in the name of Jesus, what reputation has Fox News got to defend? Greenwald's talking heads make fine points, many of them, but the really damning stuff in "Outfoxed" is simply the tape. He builds his case by identifying a particular ideological device or technique, a particular political meme (e.g., Kerry as "opportunistic flip-flopper," one that may have cut uncomfortably close to the bone), and then providing examples of how Fox endlessly, mind-numbingly drills it into the viewer. (As the Boynton article explains, this required a team of volunteers combing through countless hours of Fox News broadcasts -- I don't think the concept of "combat pay" even begins to cover it.)

Take the network's "some people say" mantra (as used in my first paragraph, above). I had watched plenty of Fox News without ever noticing this -- it's a way of introducing commentary, and specifically the reflexive right-wing views of the presumptive Fox core audience, into what is supposed to be news coverage, while appearing to not quite endorse it. "Some people say that criticizing the war at a time like this is letting down our men and women in uniform," or "Some people say Richard Clarke is a political operative who's trying to sell books." (Or, yes, "Some people are saying that John Kerry looks French!" -- uttered with a peculiar mixture of consternation and delight. Gosh, what a weird idea! But now that you mention it ...!)

There are plenty of specifics in "Outfoxed" to enrage the concerned citizen, and Greenwald includes a lame prescriptive section at the end, urging us to become media activists and reclaim the public airwaves from the imperial corporations. (I don't have any better ideas, but lefty media critics have been singing the same tune since the '60s, without noticeable effect.) But beyond the management memos urging producers and newscasters not to dwell on the Iraq body count or the 9/11 commission, beyond the pathological behavior of Bill O'Reilly, beyond the ruthlessly stilted political coverage (Brit Hume's talk show features five Republican guests for every Democrat, and most of the latter are of the mealy-mouthed centrist variety), beyond all that lies something still more discouraging.

If Rupert Murdoch had created a news network that was overtly political, even if those politics were scarily right-wing, that would be one thing. We are supposed to live in a marketplace of ideas; everybody gets a chance to air his views, and some of us, like Rupert, get more chances than others. But Fox News is the modern mass media at its worst, pushed to its logical extreme.

Rather than politics, Fox News offers only lockstep ideology. It does not present arguments; it blends fearmongering and happy talk, rinses in red, white and blue, and pours the mixture down our throats. Instead of challenging its audience, it simultaneously terrifies and comforts them, painting a hostile world constantly in need of good, old-fashioned Republican-style American might. It shows us a busy screen of sound and fury, but devoid of all thought. It's a nonstop thrill ride for the paranoid American body politic, and the public -- at least Murdoch's target audience -- has been as delighted as kids on their first visit to Disney World. Fox News has conquered the TV news landscape so thoroughly that the other networks have remade themselves in its image. Maybe I was wrong about Shep Smith -- some people say he looks more German than French.