The Democratic nominee has a long record of fearlessly exposing abuses of power -- including launching the investigation that unraveled the worst scandal since Watergate. 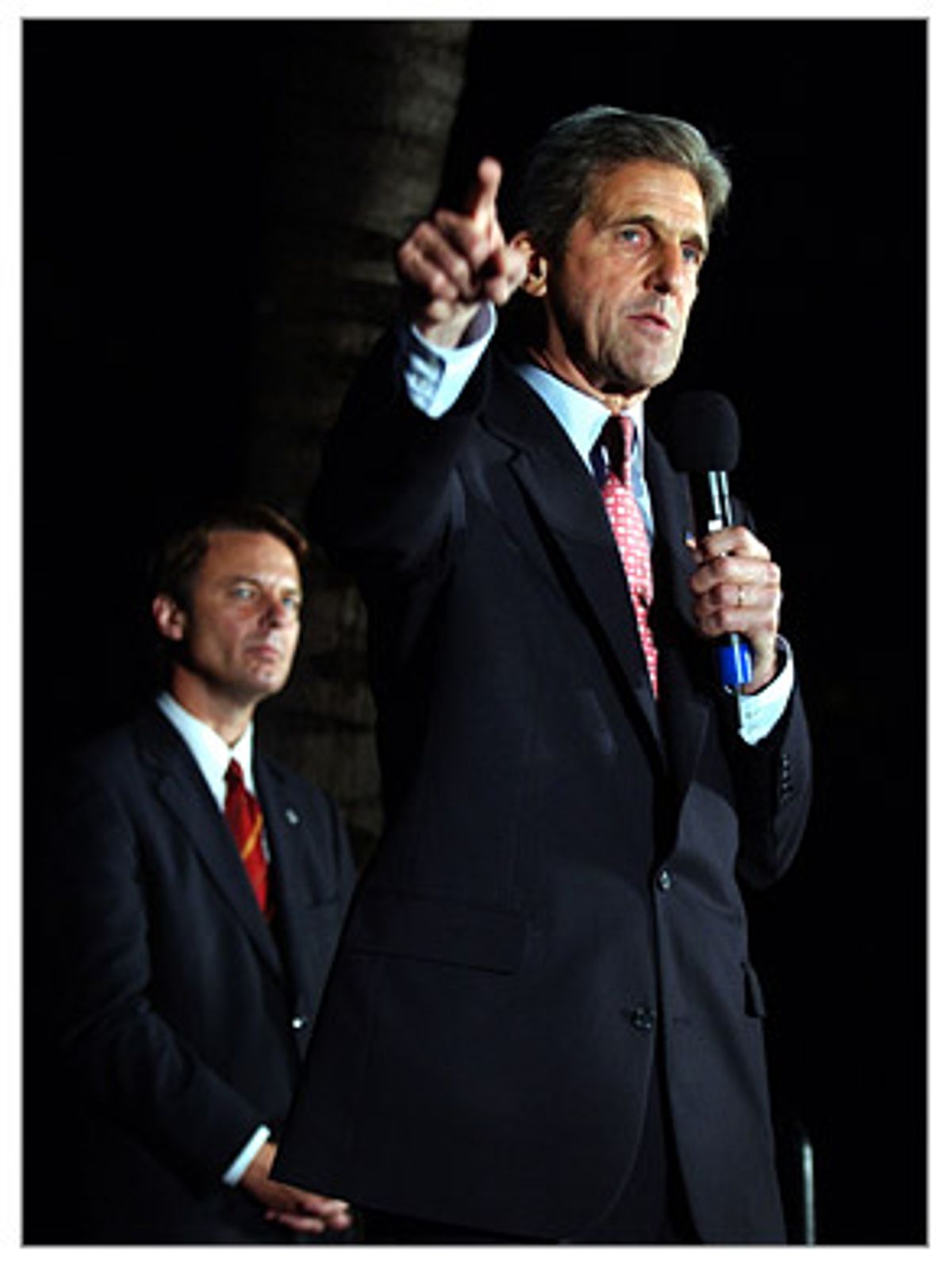 John Kerry's political education is far deeper than that of senators who have merely legislated. He has journeyed to the heart of darkness any number of times and emerged to tell the tale. It is not simply that the commander of the Swift Boats unit with which Kerry served in Vietnam was the model of the bloodthirsty, bombastic colonel in "Apocalypse Now." Kerry's combat experience hardly ended in the Mekong, but moved into the dangerous realm of high politics.

From his first appearance on the public stage, giving voice as a decorated officer to the antiwar disillusionment of Vietnam veterans, when President Nixon and his dirty-tricks crew targeted him, Kerry has uncovered cancers on the presidency, and this is especially why the Bush administration fears him. He has explored the dark recesses of contemporary history, often without political reward or even acknowledgment. Tarred as a "flip-flopper" by Bush's $85 million TV ad campaign, Kerry in fact is one of the most consistent political leaders of his generation. The truth is a vivid and unbroken line, but only sketchily known.

In his first month as a senator, in January 1985, Kerry discovered the thread that would unravel the Iran-Contra scandal -- the creation of an illegal, clandestine foreign policy apparatus run out of the National Security Council by President Reagan's military aide, Oliver North, and directed ultimately by CIA director William Casey. Kerry had the training and instincts of a prosecutor and was informed by his Vietnam experience. As the first district attorney of Middlesex County (Boston) in Massachusetts, he had smashed the local Mafia. "A central part of my campaign had been the notion that I would bring to the Senate the experience of the Vietnam period, which cautioned me against the kind of illegal activities we were hearing about, and the things that were going on," Kerry explained later. "Literally, I did do an ad hoc investigation."

Kerry surrounded himself on his staff with tough, intelligent and independent-minded investigators, and he ordered them to follow the trail. In south Florida, they found men accused of drug running who were shipping guns to the Nicaraguan Contras and claiming to have been instructed to do so by the National Security Council. They tracked down a Contra advisor in Costa Rica known as "Colonel Flaco," who had evidence that North was involved in financing the Contras with Colombian drug money. The path led further to Panamanian dictator Manuel Noriega and to Saudi funding sources. Kerry won support from Republicans on the Senate Foreign Relations Committee to launch an official investigation in large part because of the drug aspect. (Since Vietnam, concerned about the destructive heroin addiction of many veterans, Kerry had keenly followed the geopolitics of drugs and CIA complicity.)

North learned of Kerry's work and told the Secret Service and the FBI that Kerry was protecting a possible presidential assassin. The FBI harassed "Flaco," subjected him to a polygraph and determined he was no threat, but he was intimidated into silence. Republican staffers leaked information about Kerry's investigation to the Reagan White House and Justice Department. An assistant U.S. attorney in Florida, prosecuting a case based on Kerry's leads, was ordered by the Justice Department to drop the matter. Then Kerry's top aide was falsely charged with ethics violations and investigated by the Senate ethics committee, which later concluded the accusations were empty. Conservative media published stories claiming Kerry was attempting to force witnesses to commit perjury. "Expensive, Extensive, in Vain," ran a headline in the right-wing Washington Times. Virtually the entire Washington press corps dismissed Kerry's effort as a fantastic delusion and ignored it.

In October 1986, Kerry questioned the neoconservative assistant secretary of state for Latin America, Elliott Abrams, who brazenly lied about foreign funding for the Contras. It was this testimony that led in time to Abrams' pleading guilty to a felony. (He was pardoned by the elder Bush and is now the NSC's chief for Middle East policy.)

A month later, the Iran-Contra story broke in a Lebanese newspaper. However, Kerry was excluded from the congressional investigating committee for the sin of having been prematurely right. As consolation, he was given chairmanship of the Subcommittee on Terrorism, Narcotics and International Operations, where he plowed ahead. After three years, he reported that "individuals who provided support for the Contras were involved in drug trafficking, the supply network of the Contras was used by drug trafficking organizations, and elements of the Contras themselves knowingly received financial and material assistance from drug traffickers. In each case, one or another agency of the U.S. government had information regarding the involvement either while it was occurring, or immediately thereafter." His report also noted that "officials in the Justice Department sought to undermine attempts by Senator Kerry to have hearings held on the [Contra drug] allegations."

Kerry's work on the Contra-drugs connection led him to discover a link to Bank of Credit and Commerce International, an operation that was a front for drug running, money laundering and terrorism. He launched an investigation that exposed its criminal "corporate spider web," as his report put it, in 1992. His report pointed to new areas that should be investigated: "Further investigation is needed to understand the extent to which BCCI and Pakistan were able to evade U.S. and international nuclear non-proliferation regimes to acquire nuclear technologies."

For decades, Kerry has pursued a persistent and cumulative investigation into the underside of national security and terrorism. If the Democrats had held the Senate for a sustained period of time, Kerry's work would have borne more fruit, and it is even conceivable that his proposal to regulate the netherworld of money laundering, which was not enacted, would have helped stymie al-Qaida.

From Vietnam onward, Kerry has probed the inner recesses of government, grasping that good intentions are never enough and that the system doesn't work automatically. He has experienced the abuse of justice; had his patriotism impugned; battled enemies foreign and domestic; tried to restore accountability; and fought on, down to today, which is why he is running for president.