Is Iran next? Pundits are long on hawkish bluster, but short on a plan. Plus: Even Bill O'Reilly blasts Swift Boat Vets' "bitter personal attacks" on John Kerry -- and defends Kerry's war record. 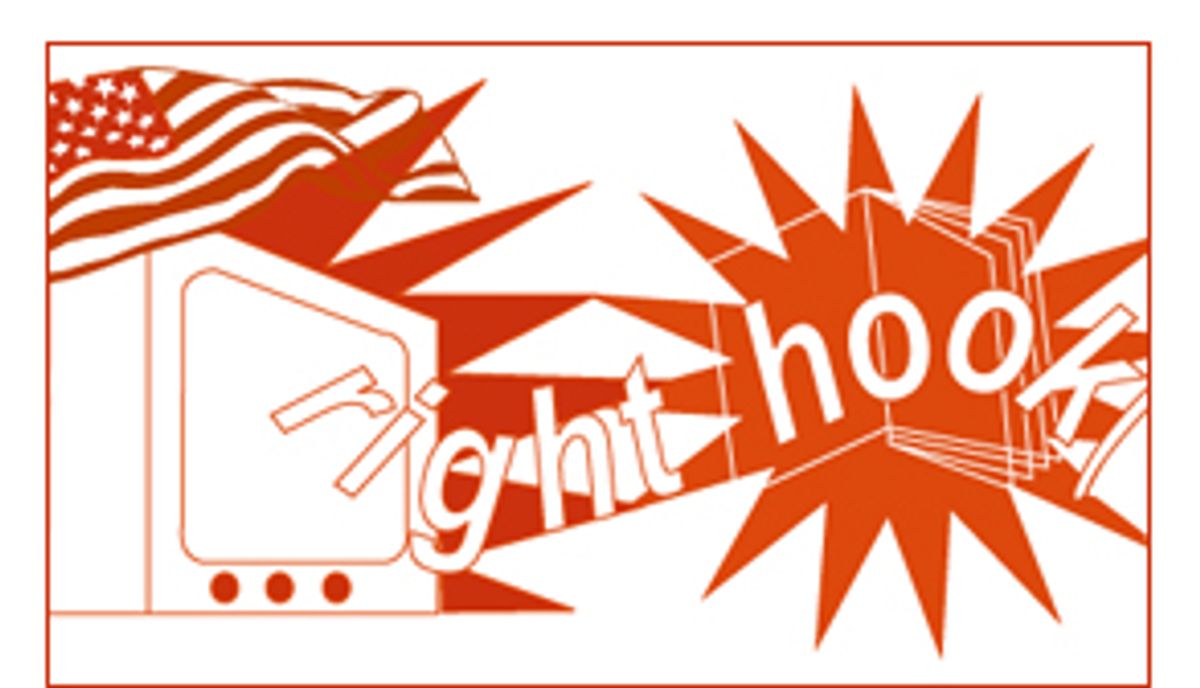 Since National Security Advisor Condoleezza Rice warned last week that the U.S. won't tolerate nuclear weapons in the hands of Iran's mullahs, the political right has cranked up the volume. War hawks have long viewed the invasion of Iraq as the first critical step to uprooting terrorism in Tehran and establishing democracy in the Middle East. But with Israel growing agitated and threatening a preemptive strike, as it did against Iraq's Osirak nuclear reactor in 1981, many experts are skeptical of a military solution. Nor does diplomatic pressure appear to be working; Tehran recently agreed to cooperate with international inspections, only to backpedal defiantly.

The political right is again ringing the alarm bells but isn't offering much in the way of problem solving. Writing in Mens News Daily.com, Colorado columnist Tom Marzullo, a former special forces soldier in both the U.S. Army and Navy, frames his warning in near apocalyptic terms.

"While the lukewarm intellects of the media sit in their respective corners drooling over pictures of the most recent car-bombings in Iraq and the Botox-enhanced cragginess of this seasons DNC meat puppet, near-term pivotal events that will predict the long term success or failure of U.S. policy in the Middle East are barreling towards us  Irans Islamist government has been working diligently for well over a decade on two major projects that, if both are completed, will catapult Iran into position as the lynchpin of a new Islamist empire, impervious to all aspects of Western culture."

Marzullo sees an imperialist Iran hungry to seize power in Iraq, and then Saudi Arabia.

"The first project is fashioning Iran as the safe-haven for Islamist organizations throughout the globe. In this the Mullahs have been increasingly successful and in September of last year hosted the equivalent of a summit meeting of international terror. We have already seen the effectiveness of the Iranian trained and supplied militias in southern Iraq. If these succeed in creating a de facto Iranian-ruled enclave in Iraq, then the next step must be to the south where Saudi Arabia and its riches are already under internal attack by Islamists."

He believes an Israeli military strike against Iran is only a matter of time.

"We already know that the first Iranian atomic weapon is due to be rolled out in 2005 and that the Israelis are expected to try to stop this program as they did Saddams nuclear program. As Irans version of the 'SS', the fanatical Islamist Pasadran, are already in charge of this project all of the diplomatic yapping in history will never derail this essential juggernaut. Therefore the Israeli strike is all but inevitable."

But "Iran's mullahs are not so stupid as to fail to learn from the Iraqi nuclear disaster," Marzullo adds, "so it is reasonable to suspect that they have laid plans to trick the Israelis into striking the wrong targets  while they foment the Islamist takeover of the Middle East.

"Our nation's job should be to see that it doesn't and time is getting short."

Marzullo doesn't specify how the U.S. should handle that ominous scenario. Nor does former Wall Street executive Brian Trumbore, now editor of StocksandNews.com, who also believes the U.S. war on Iraq ultimately follows a road to Tehran.

"I dont think for a minute that leaving Saddam in power would have been a good thing. Of course the president made some colossal mistakes, well catalogued in this space, and U.S. credibility is at an all-time low. But Ill tell you whats about to hit us in the face: Iran. And it will be further proof that we, the West, had to begin to effect change in this entire region before the fundamentalists totally took over. If not now, when?

"The mullahs are desperate. They not only dont want the Iraqi experiment with democracy to succeed, they desire a full nuclear arsenal. The U.S. and Israel, as well as France, Germany and Britain are all in agreement that Iran restarted its weapons program in total defiance of the UN and the International Atomic Energy Agency. Iran is pursuing its quest to enrich uranium which would leave it one step removed from terrorizing the world, especially when one considers the proxies Tehran could line up to act on its behalf."

But if war hawks see Iran as the key to transforming the Middle East from terrorist swamp to democratic frontier, Trumbore sees some daunting obstacles -- not least a Bush White House with a major credibility problem.

"The timetable is faster than once thought and there is the chance that Israel could act before the West does. Where the U.S. suffers, of course, is in losing credibility over the WMD issue. It hurts the White House big time. Margaret Thatcher would say 'its no time to go wobbly,' yet there [is] renewed talk of pulling U.S. forces out of Iraq sometime in 2005. I know Im repeating myself, but the future is grim unless we keep the heat on, now more than ever."

But with the mullahs poised to wield nukes, he's concerned there's no plausible military solution.

"As to its burgeoning nuclear weapons program, and the ultimate nightmare, the marrying of fundamentalists and the bomb, former CIA Director Robert Gates believes Iran 'can go with a weapon whenever they want to.' So much for the 2-3 years timeframe being parroted in some quarters. The facilities are all spread around, including urban areas, so its hard to envision where a surgical strike by the U.S. or Israel can take care of the problem. And as Iran's ambassador to the UN said when asked about possible sanctions against his country, 'Our integrity is not to be bargained or up for sale.'"

American Enterprise Institute fellow Michael Ledeen has long pounded the table over Iran as the nexus of the global terrorist problem.

"The war in the Middle East -- for it is a regional war, not merely a battle for Iraq -- cannot be analyzed at the level of the individual terrorist groups, because the terrorists are part of a larger context. The organizing center is, as Spanish Magistrate Balthazar Garzon publicly put it, a 'directorate' located in Iran, that works closely with Iranian intelligence organizations, including the Revolutinary Guards. Those organizations, in turn, work with their counterparts in other friendly countries."

In Ledeen's view, the Iraq front is just the beginning.

"If I am right, then we cannot possibly 'win' in Iraq, because Iraq is just one battlefield in a (at a mininum) regional war. The Iranians, Syrians, and (a significant group of) Saudis dare not acquiesce in the creation of a free and successful Iraq, because that would mortally threaten their own survival. The regimes in Tehran, Damascus, and Riyadh are extremely unpopular; their peoples are aching for the chance to remove the regimes and experiment with freedom. The regimes know that, and are ruthlessly oppressing their peoples."

But if Ledeen seems to suggest more military action on the horizon, he typically reverts to loftier discussion of fomenting democratic revolution from within the country. He insists that 70 percent of Iranian people are "on our side" and the U.S. could exploit that to "liberate Iran in a matter of a few months." Not that he actually elaborates on how to "empower the Iranian people."

"Remember that Machiavelli said that tyranny is most unstable form of government," Ledeen writes. "And precisely because the regimes are unstable, our most potent weapon against them is political, not military. I do not believe we can win the war by force of arms alone. It is certainly very important to defeat al Sadr in Najaf and Kut, and to liberate Fallujah, but even those victories will not suffice. Our regional enemies will find new instruments -- indeed, I have no doubt they have them already in place. Victory, as the president has said, requires regime change and the spread of freedom. And this is not nearly so daunting as might appear 

"If we do not quickly expose the vulnerability of mullahs and empower the Iranian people, I believe the next few months in Iraq will, if Tehran has its way, be bloodier than anything we have seen to date."

O'Reilly: Kerry "demonstrated provable valor"
Meanwhile, substantial debate over the U.S. presidential campaign continues to flounder in debate over a war three decades ago. While Fox News Channel's star anchor Bill O'Reilly has expressed no great love for John Kerry, as the election season matures he seems to have decided there is little wisdom in leveling blatant lies and "bitter personal attacks" against political opponents. In his latest column on his personal Web site, he says the anti-Kerry group Swift Boat Veterans for Truth is "way out of line" and warns that its attacks on Kerry's Vietnam record may backfire.

"I believe Jim Rassmann when he says that Kerry saved his life by pulling him out of a Vietnam river while under fire. Rassmann is a former Green Beret, a former police officer and a long time registered Republican until earlier this year. If he says John Kerry is a hero, nobody should doubt it. Rassmann has earned the right to be trusted and insulting his testimony is way out of line 

"It is absolutely wrong for Americans to condemn Kerry's war record because he demonstrated provable valor. However, those who distrust him do deserve to be heard although facts not emotion should be demanded.

"I think the Swift Boat political advertisement calling Kerry a charlatan is in poor taste, and if this kind of thing continues it might well backfire on the Kerry haters. Most Americans are fair minded, and bitter personal attacks do not go down well with folks who are not driven by partisanship."

O'Reilly recently fudged a few facts himself regarding Kerry's portrayal in the media; nonetheless, he finds himself sympathetic toward, well, Americans who are struggling to fish even an ounce of reliable information from the overpowering partisan muck that is election '04.

"The lesson here is that blind partisanship is not an attribute. No person or candidate is all good or all bad. In America today, with both sides peddling lies and defamation and spin, it is alarmingly difficult just to get simple facts on which to base a responsible vote."