The director of "Hero" comes out with a follow-up so heroically seductive you may just faint into its arms. 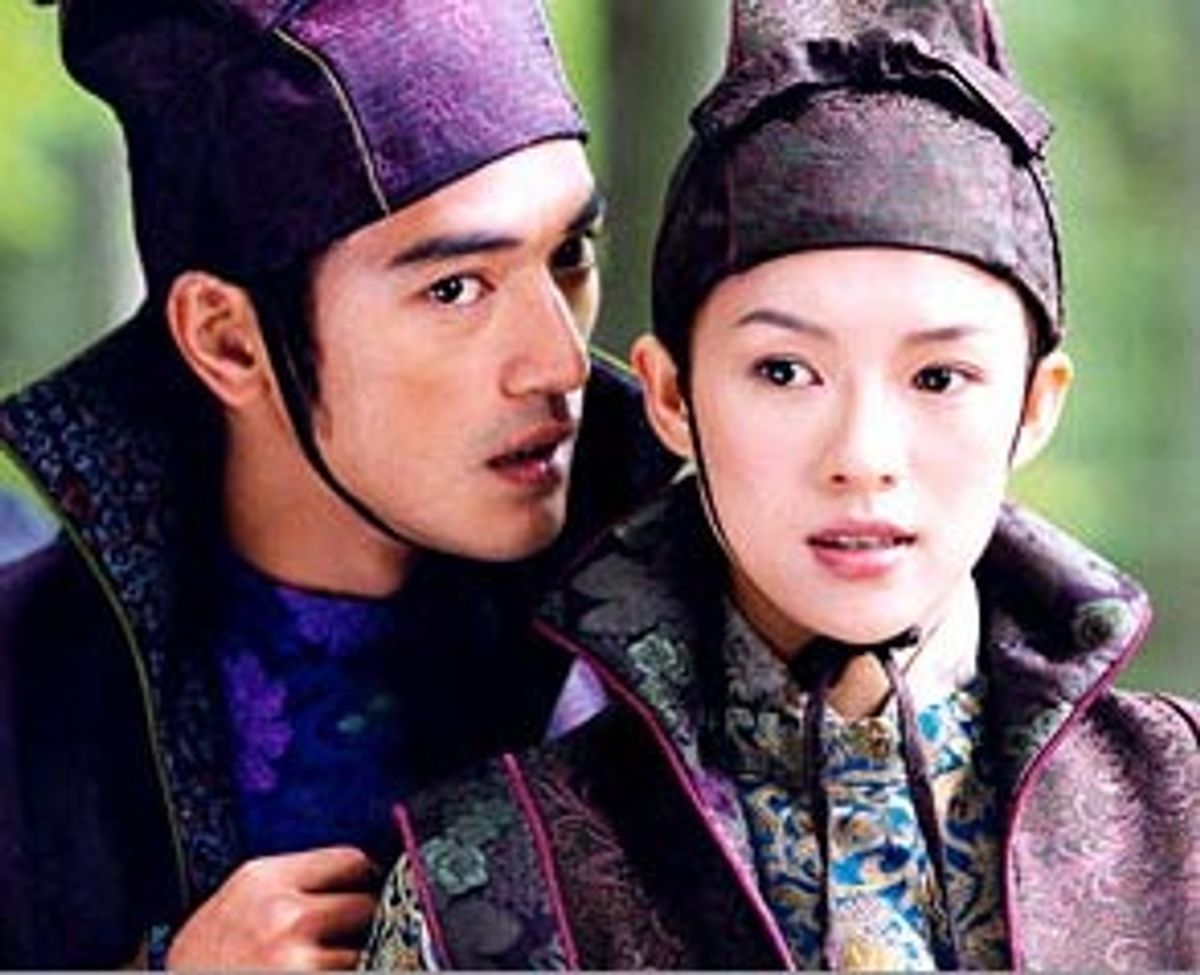 When Ziyi Zhang glides into her first scene in Zhang Yimou's optically and operatically intense Tang Dynasty romance "House of Flying Daggers" -- in her rustling brocade robe and breezily tinkling golden headdress, she doesn't do anything so mortal as walk -- the movie stops, momentarily, almost before it has really begun.

Ziyi Zhang's character is Mei, a blind warrior girl masqerading as a dancer in a brothel. She's about to perform for Jin (Takeshi Kaneshiro), a local deputy who has come, undercover, to arrest her. Jin, lounging against a floor cushion like a bored frat boy, beckons Mei closer so he can scrutinize her, as well as intimidate her. He asks why her name is so simple, when all the other ladies in the establishment go by elaborate flower names. Mei fixes him in her sightless gaze -- her face is a bisque oval whose very contours suggest the unmappable shape of intelligence -- and tells him, neither haughtily nor modestly but in a tone that confirms the absurdity of the question, "I don't want to compete with those ordinary girls."

With that line, Ziyi Zhang throws down the challenge that "House of Flying Daggers," a martial-arts movie that owes more to Bizet or Puccini than to Bruce Lee, meets with supple and spectacular grace: This is a plush, enveloping blanket of a picture that nonetheless feels essential, boiled down to to its barest emotional elements. It's an epic of the heart.

"House of Flying Daggers" fits nicely into the slipcases of both romance and action-adventure, if you feel the need to categorize it. But as a piece of filmmaking, it's as crisp and as slithery as a piece of silk, weaving its way around and through multiple genres as it blurs and softens any hard divisions between them. As "House of Flying Daggers" unfolds, you're barely aware of the story's dramatic boning, the corsetry that keeps it in shape. To seduce us, it uses the most basic tools -- color, sound, movement -- often all at once. Its color palette alone -- from candy reds and yellows, to autumnal russets and golds to, finally, the muted shimmer of icy whites and grays -- demands complete surrender to its sensual vocabulary.

But the picture isn't an empty spectacle. The beauty of "House of Flying Daggers" is so lulling that by its climax, we're barely aware of the way its dramatic texture has become denser, more intense. The finale of "House of Flying Daggers" has the emotional potency of silent film. Everything around the actors -- the sound, the colors, the lush scenery -- is still firmly in place, yet it may as well have dropped away. The actors, and the web of feeling that connects them, are all that matter. Their faces become the only reason for the screen to exist.

Ziyi Zhang's Mei can't be called the anchor of "House of Flying Daggers" -- that's too clumsy and clanking a word for what she does, and it undermines both her delicate beauty and her lithe strength. It's more accurate to say she's the stem around which "House of Flying Daggers" wraps and twines. Mei is hiding out at that brothel -- it has the sugared-nipple name of Peony Pavilion -- because she's really a member of the House of Flying Daggers, a secret, Robin Hood-like outfit that roams the countryside defending the poor and disenfranchised and thus enraging the local power structure.

The leader of the House of Flying Daggers has recently been killed by the local deputies, but the organization continues to thrive. One of the deputies' senior officers, Leo (Andy Lau), has sent Kaneshiro's Jin, an unreasonably handsome soldier whose sex appeal is far more lethal than any sword he carries, to the brothel to ensnare Mei. Leo and Jin hope she'll lead them to the House of Flying Daggers' lair so they can vanquish the group once and for all.

Jin botches the capture, and Leo steps in to complete it. Mei nearly defeats him in a spiraling, whirling duel: Though she's unable to see, she's a masterful, agile fighter. But Leo subdues and captures her, bringing her back to headquarters, where he threatens her with torture unless she reveals the secrets of the House of Flying Daggers.

And then, suddenly, a stranger swathed in black rescues her from her cell. It's Jin in disguise -- his motives become clearer as the story winds through its numerous interlocking twists and turns -- and the two of them escape through the forest. Although they both resist it, they fall deeply in love.

Ziyi Zhang, Kaneshiro and Lau all have the charisma of old-fashioned movie stars. (Ziyi Zhang, formerly known as Zhang Ziyi, played Jen in "Crouching Tiger, Hidden Dragon," and although she wasn't the star, she lingers -- in my mind, at least -- as its most memorable character. Kaneshiro was the pineapple-eating cop in Wong Kar Wai's "Chungking Express." Lau, a huge star in Asia, may be best known to Americans as the star of "Infernal Affairs," which was recently released here.) Ziyi Zhang and Kaneshiro, in their early, prickly, falling-in-love scenes and their later, wrenchingly tender ones, use the screen space around them as if it were a canvas -- the air around them vibrates with muted erotic tension. And Lau, his stern demeanor giving way to peeled-naked vulnerability during the course of the picture, gives a performance that thrums beneath the surface of his skin. The secrets revealed in the last quarter of the film completely change the shadowy light around the character of Leo as we see him in the first half.

"House of Flying Daggers" is one of those pictures in which every frame has been lavished with care. Yet it never looks overworked. Zhang's last picture, the exhilarating and equally gorgeous adventure epic "Hero," did well with American audiences. Before that, Zhang, who lives and works in China, was best known (in the States, at least) for art-house pictures like "Ju Dou" and "Raise the Red Lantern."

"Hero" was Zhang's first foray into wuxia, or martial-arts movies. And he has said that "Hero" was just a rehearsal for "House of Flying Daggers," a way of mastering the genre's conventions. Here, Zhang is clearly in complete control -- and still, the picture has a relaxed, fluid feel to it. He takes the staples of wuxia films -- bamboo-forest fight sequences, for instance, like the one seen in Ang Lee's pale-by-comparison "Crouching Tiger, Hidden Dragon" -- and recasts them with subtle twists. In the "House of Flying Daggers" bamboo-forest sequence, Jin and Mei flee from a group of soldiers (the baddies slide down their individual bamboo stalks face-forward, with a silently deafening "whoosh"), only to hit a trip-wire that causes hundreds of bamboo spikes to pop up through the forest soil like giant pencil points.

The sound design of "House of Flying Daggers" is so vivid it's practically part of the cinematography. (The director of photography here is Xiaoding Zhao; the picture was filmed in Ukraine.) Mei and Jin trek through forests that shift from flame-orange tones to velvety moss-green ones; they take a breather in a vast wheat-gold field, where Jin picks flowers for Mei. (If that sounds corny, I should note that Jin harvests massive bunches of posies without ever dismounting his horse.) The wind -- which Jin considers his alter ego -- travels with Jin and Mei like a discreet but always present accomplice; we hear it, and other forest sounds, as Mei does, quietly intensified.

Every sight and sound has resonance: The shivery whisper of flying arrows, the way Mei's delicate feet bounce off a group of soldier's upturned shields as if she were bouncing off giant piano keys. Zhang speaks to us through the details, in the way a flying dagger pierces a single droplet of blood suspended in air, or the way a fight sequence begins in autumn and continues well into winter, the weary warriors lunging through drifts of snow to get at one another -- it's as if they've been at each other's throats not just for minutes but for months or even years.

As a director, Zhang spoils us, offering us visual and aural luxuries as if they were delicacies on a tray. For example, the first half hour of "House of Flying Daggers" features not one but two dance sequences, the second even more spectacular than the first. The details of the second -- an elaborate performance called the "Echo Game" -- are so remarkable they have to be seen to be believed. So I'll describe only the first: The performance takes place in a grand, meticulously decorated room, its floor a tiled mosaic of pastel butterflies and peonies. Mei, whom Jin has commanded to dance, stands in the center of the room, waiting for her cue. Assorted temptresses, draped lavishly yet modestly in gowns of orange, blue and gold, flutter at the sidelines. The music starts -- it's supplied by a band of beauties in blue robes, who sit in a row with their legs daintily crossed, plucking their stringed instruments -- and Mei reacts, cocking her head slightly as if she were responding more to the vibrations of the colors around her than to the music.

The song -- about a woman so beautiful she can destroy whole cities with a glance -- at first seems too somber to suit this diminutive, if self-possessed, beauty. But as Mei begins to dance, her arms elongated by ribbonlike sleeves of pink chiffon that swirl and snake around her, we realize she has taken possession of the whole room. Everyone, including the cocky young deputy who has come to arrest her, belongs to her, and from that moment, "House of Flying Daggers" takes possession of its audience, too. It reminds us that there's no greater moviegoing pleasure than to give ourselves wholly and willingly to the picture in front of us. "House of Flying Daggers" is heroically seductive; there's no recourse but to faint into its arms.