"Death of an Ordinary Man" by Glen Duncan

A thrilling tale of suburban family life, narrated from beyond the grave. 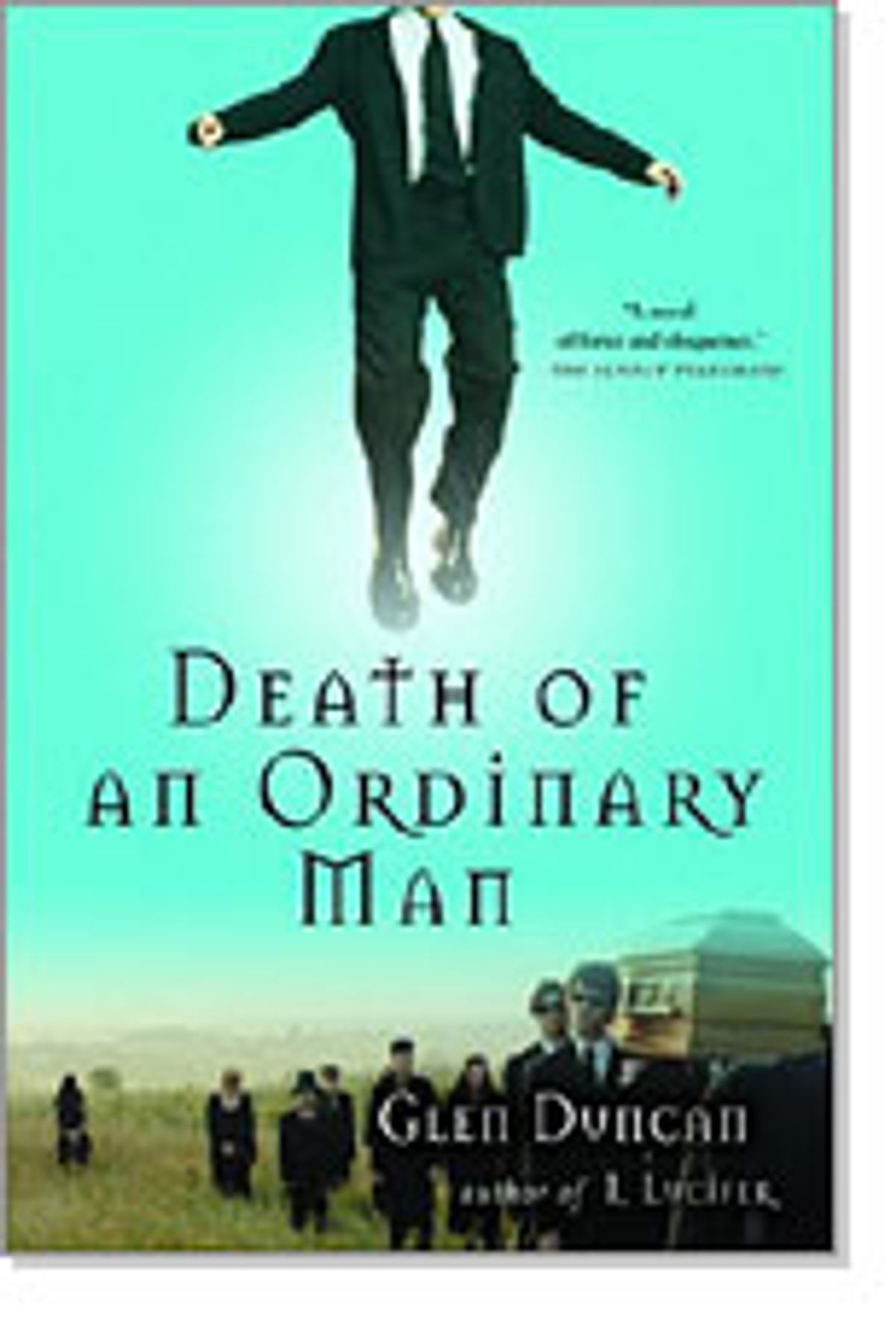 Nathan Clark's experience of being dead is a little like waking up disoriented when you're on vacation: "Those first mornings in foreign hotels you opened your eyes and knew nothing: where you were, how you'd got there, who you were, even. You could be anyone. Like that, but without the hotel."

Nathan's problem, in English novelist Glen Duncan's wrenching page-turner, isn't just that he's dead. He's a ghost, haunting his stricken family on the day of his own funeral, although he never quite says the word "ghost" to himself. That's part of the problem with being dead, it seems; you're still you, and your thoughts and feelings mostly seem familiar, but you're wrestling with all kinds of new sensations, and your relationship to the living world isn't quite what it used to be.

So Nathan doesn't even get angry, or even disappointed, when he figures out that Cheryl, his beloved but always difficult wife, has finally slept with his best friend Adrian, who's long lusted after her. He only feels a little "stone of sadness" inside, at the fact that he now belongs to "another league of ordinariness," the "dully glowing mass" of all the men and women who've been cheated on. (Even more extraordinarily, he isn't mortified by learning that his teenage daughter Gina, although technically a virgin, is highly proficient at oral sex.)

Perhaps Nathan's combination of omniscience and impotence -- he can read people's thoughts and enter their memories, but if he gets too close they experience a terrifying vertigo -- will initially remind readers of Alice Sebold's bestseller "The Lovely Bones," not to mention the smash prime-time soap "Desperate Housewives." But Duncan's life-after-death novel has less treacly sentiment than the former, and less red-state snark than the latter.

As Nathan prowls the world of the living like a spectral detective, trying to work out what happened to him (and what has devastated the family that once made him so happy), he receives no clear signals from a benevolent God, meets no angels or fellow wandering souls, and never learns whether his experience is universal or peculiar to himself. (Yes, there is a metaphysical, and appropriately mysterious, level to his explorations, but I'd better let you discover that for yourself.) This is an agnostic's novel about the afterlife, if that's possible; what keeps this former history teacher tied to the world is the immeasurable love he still feels for his wife and children, and his unbearable ache at losing them.

If Duncan's previous novel, "I, Lucifer," was a story about love and mercy masquerading as a diabolical satire (in which Satan himself takes human form), "Death of an Ordinary Man" is an operatic and heartbreaking saga of family life, done up in ghostly mystery drag. That's in no way a criticism. Once you pick up this book, you'll read on breathlessly until Nathan has answered all his questions: How did he die, and why can't he remember it? What dreadful fate befell his youngest daughter, Lois? (And is she trying to contact him, from wherever she is?) Who are the couple at his funeral he doesn't recognize, and why does their presence fill him with dread? But what will stick with you later is Duncan's simultaneously ruthless and tender portrayal of Nathan and Cheryl's marriage and the world around it, from the feckless and brilliant Adrian to the defiantly unconventional Gina, their distant, scientifically inclined son Luke, Nathan's self-pitying father, Frank, and, of course, the adored and doomed Lois.

Duncan is an ambitious but never showy prose stylist, and while critics across the Atlantic have compared him to such Brit-lit leading lights as Martin Amis and Will Self, he is more compassionate, and less terrified of domesticity, than either of them. Part of this book's brilliance is that Nathan essentially finds himself in the same position as the novelist: He sees everything and can change nothing, but is ideally placed to understand and to forgive -- to forgive even Cheryl's coldness and betrayal, Luke's darkest thoughts about his sisters, Frank's dreary self-pity, Gina's overwrought self-mythologizing.

Most of all, Nathan's got to forgive himself for all the inevitable sins of marriage and fatherhood, and to figure out what he can do, from his side of the veil of tears, to make things easier on his survivors. Is this a story about an unexceptional family in suburban England afflicted by tragedy and haunted by a ghost? Not at all; it's really about how the vast, craggy landscape of family life is as scary and as thrilling as ascending Everest or traveling to the moon, and about the fact that love really can transcend death, even for agnostics. There's nothing ordinary, in the end, about the heroic and majestically sad Nathan Clark -- or about the book that contains him.

Our next pick: A collection of stories teeming with infidelity and selfishness will fill you with nothing less than fascination