Movie from hell? Nope, this Keanu Reeves action flick actually rocks -- and so does its star. 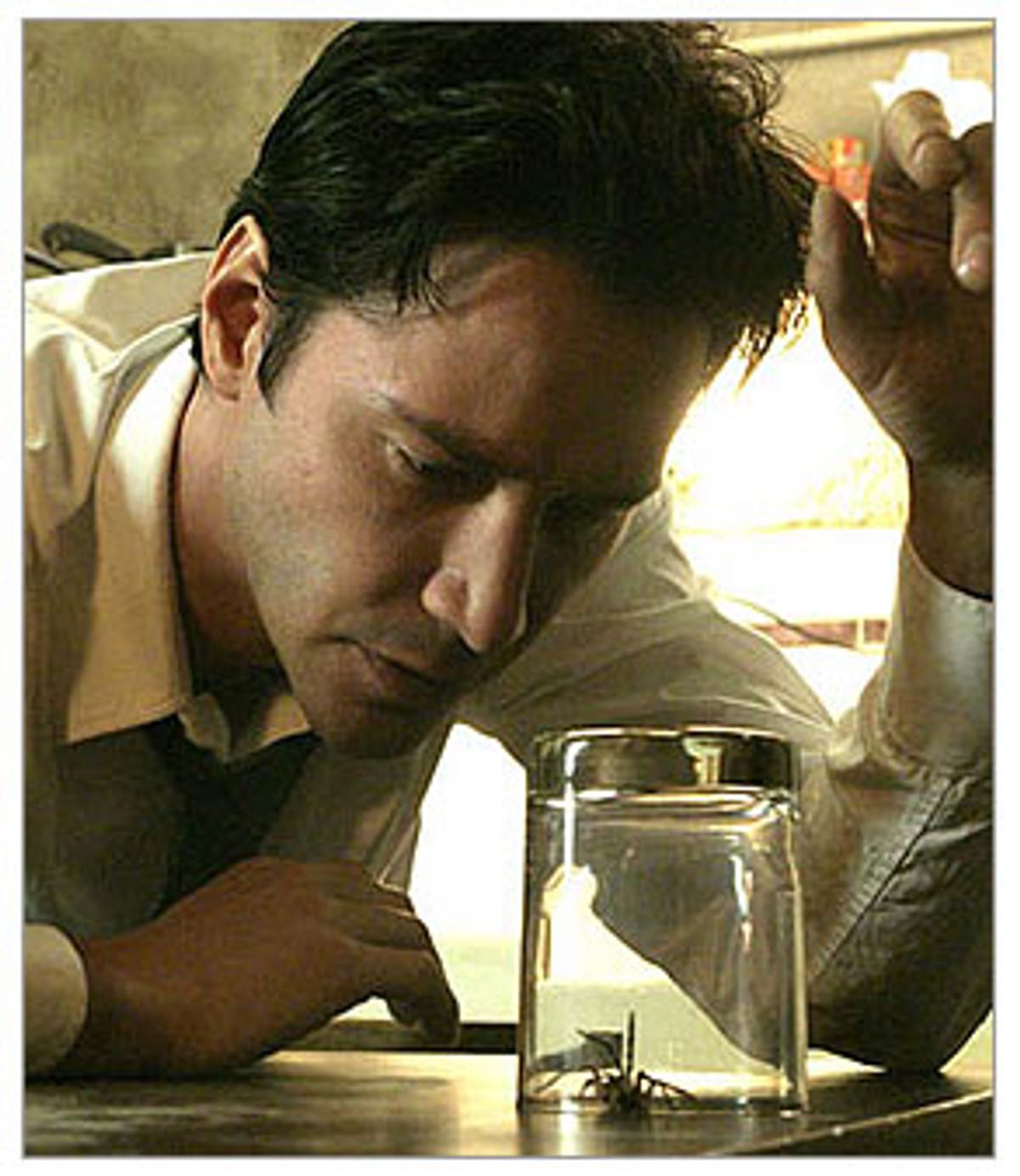 It's basically just got to suck, right? Here we have a comic-book franchise that's about two-thirds a cheesy "Exorcist" rip-off, released in the deadest month of Hollywood's winter coma, directed by some guy who's made Britney Spears videos and starring Keanu Reeves, trying to claw his way back from the downward mobility of the final "Matrix" movie.

OK, but here's the thing: "Constantine" pretty much rocks. It doesn't rock in the sense of "Dude, I just saw the best action movie ever," the way you probably felt when you walked out of the original "Matrix" back in '99. It's a more relative kind of rocking, the rocking that indicates, "Land o'Goshen, that was much better than I had any reason to expect." Keanu Reeves is -- let me just get this off my chest -- very good. And we find out that hell bears a strong resemblance to bad traffic in Los Angeles; who can be surprised by that?

Hardcore sci-fi and comics fans are going to be divided on this one -- it's based on the DC comic "Hellblazer," and the filmmakers have made significant changes -- but for most moviegoers, "Constantine" is going to seem like an unlikely blaze of fast-moving supernatural fantasy. It's crisply paced, with a snappy script and colorful special effects that never take over the movie. Its cast of grotesque characters is endearing -- Tilda Swinton as the angel Gabriel! Tilda Swinton! Swedish actor Peter Stormare, playing Satan as, more or less, Truman Capote! -- and its Manichaean heaven-vs.-hell cosmology makes about as much sense as you can expect in this genre.

Maybe Reeves had to play a guy dying of lung cancer to liven him up. Within the first few minutes of "Constantine," we've seen a Mexican peasant dig up a dangerous artifact in the desert, and a little girl in L.A. crawl along the ceiling, Linda Blair-style. But just when the "Exorcist" quotes are becoming annoying, they turn to parody: John Constantine shows up to expel the girl's goblin, and it's Keanu as a dark-suited, chain-smoking gloomy Gus, wisecracking his way through the onslaught of demons and his own impending doom. Not only have the ciggies gotten to him, but Constantine knows, not with the power of belief but with certainty, that he's headed downstairs to the Warm Place when he shuffles off this mortal coil.

I can understand why "Hellblazer" fans are upset about this movie. John Constantine was invented 20 years ago by hallowed comics genius Alan Moore in his "Swamp Thing" series, and his fictional history is well defined. In pen and ink, he's a "working-class warlock" (to use Moore's phrase), a Sting look-alike from Liverpool who survived a brutally abusive childhood, moved to London with his single-mom sister, and played in one of the worst punk bands of the late '70s.

Reeves' Constantine is an entirely different character, a sardonic L.A. noir hero who lives alone in a gigantic loft with all his supernatural trickeries and a boatload of old-school Catholic guilt. I wouldn't argue that he's a better character, but he works; and even the lung cancer angle -- which might be the only way you can have a chain-smoking action hero, these days -- is imaginatively handled and provides a neat little narrative twist at the end of the movie.

This Constantine patrols the City of Angels, looking to punish those emissaries of hell who break the rules of the great superpower peace treaty, under which humans are free to choose their own destiny without direct interference from God or Satan. The incident with the little girl convinces him that something even more unsavory than usual is stirring down in hell, and while he doesn't want to admit it, he still has hopes of finding his own route to salvation. (Swinton, who nearly steals the film with her snooty, androgynous Gabriel, sneers at him for this.)

He's got sidekicks: Shia LaBeouf, in a boring role as Constantine's earnest apprentice; Pruitt Taylor Vince, sweaty and torpid as a boozy priest troubled by visions; Djimon Hounsou, as a guy called Papa Midnight who runs a "neutral" nightclub where demi-angels and demi-demons hang out together; Max Baker, as a little Cockney collector of magical arcana. ("What is it with you and bugs?" Constantine asks him. Max, a little wounded: "I just like them." Constantine: "Who doesn't?")

Of course there's a chick, and it's Rachel Weisz, soldiering through a canned role as the cute lady cop who's also a psychic who also has a nutty twin sister. Weisz has the looks and the carriage for stardom, and she's an adequate actress by movieland standards, but something in the package doesn't quite click; she seems doomed to play these kinds of patchwork roles in non-prestige pictures. There are surely worse fates, and if no real sparks fly between her and Reeves, they develop a nifty little comic balancing act by the end of the movie.

You'll visit hell (three or four times at least, I lost count). You'll visit heaven, but only once. Satan makes a personal appearance on Earth, to collect the soul of his despised enemy Constantine. (I won't discuss what role Lucifer's opposite number may or may not play.) You'll see angels and demons alike destroyed with Holy Automatic Weapons, and an entire tank of holy water pumped through a building's sprinkler system. You'll discover that they have a different Bible in hell and that, as all Catholics and fans of the occult already know, the old rites in Latin were the ones that actually worked. It's genuinely too bad that comics fans couldn't be made happy too, but "Constantine," in this dark season, is a reason for action-movie fans to give thanks. In nomine Patris et Filii et Spiritus Sancti, Amen.