Stephen Chow, one of Asia's biggest stars, is poised for his U.S. breakthrough. Is he worthy of the hype? 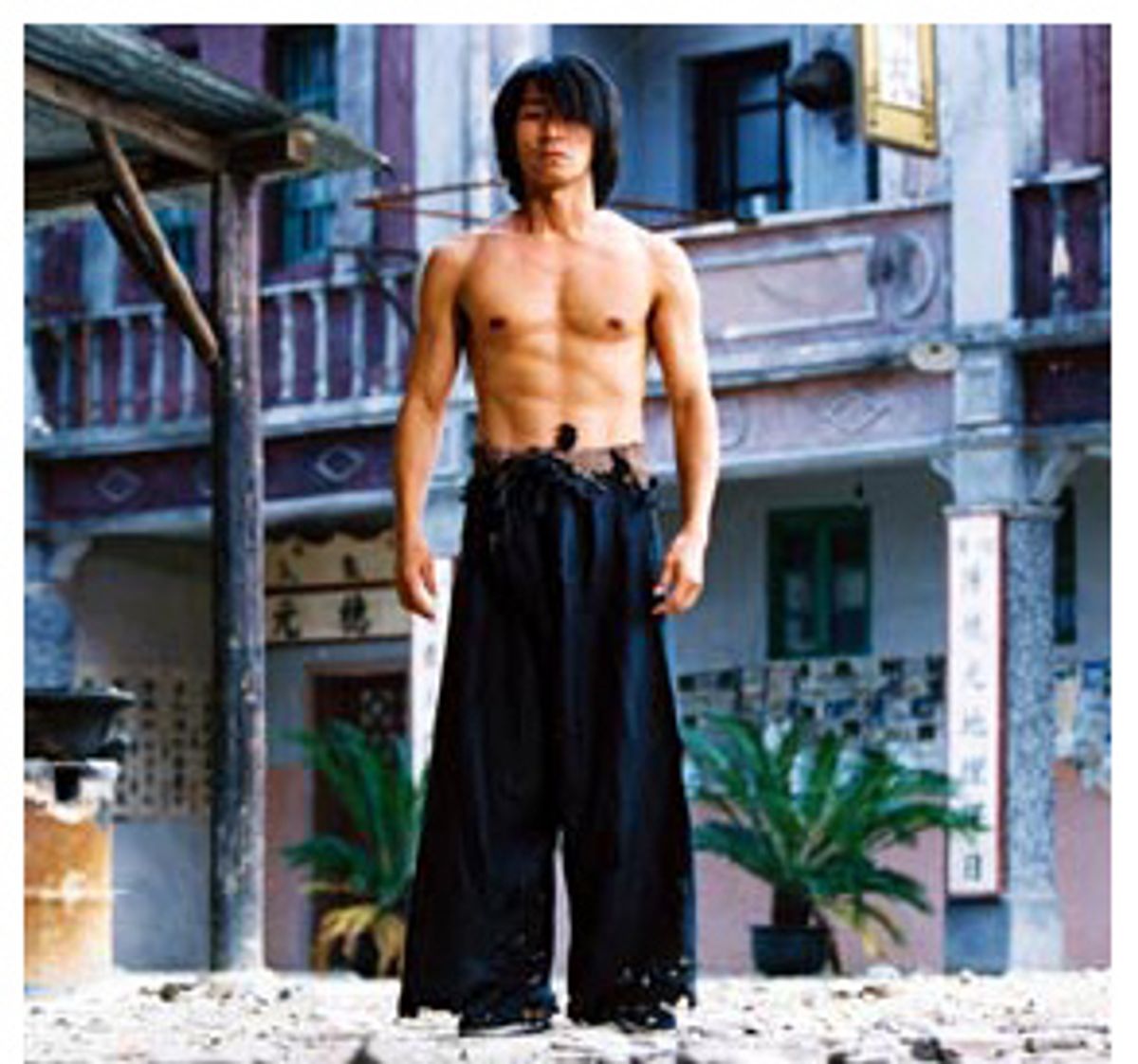 If Hong Kong film has entered its decadent period, then Stephen Chow is its poet of delicious excess, devouring overripe figs and deflowering virgins while the city burns around him. Oh, I don't mean he's actually doing those things, although he could if he wanted; Chow is probably the biggest star in Asia, and since the mid-1990s he's morphed into an auteur as well (his new "Kung Fu Hustle" is billed as "written and directed by Stephen Chow," although the credits actually list three co-writers).

His 2001 movie "Shaolin Soccer" -- a brilliant, and blindingly stupid, combination of the world's most popular action-movie genre and the world's most popular sport -- became the biggest hit in Hong Kong history, although Miramax botched its American release so thoroughly that few Westerners ended up seeing it. With "Kung Fu Hustle," a weightless live-action cartoon that vacillates between thrills and silliness, Chow should begin to attract some attention in the United States.

Is he worth it? I guess that depends on what the question means. The first 10 minutes of "Kung Fu Hustle," a violent extravaganza culminating with a Broadway-style dance number performed by the top-hatted, waistcoat-wearing villains of the notorious Axe Gang, might be the most exciting sequence I've seen in a movie in two or three years. Then there's the rest of the movie, which, while perfectly enjoyable, is basically a long litany of fight scenes staged in homage to martial-arts movies of the past. If you're sufficiently in the know about these things, you'll be able to tell the Bruce Lee tribute apart from the Jackie Chan tribute and the "Matrix" tribute; if you're not, it might be like watching your neighbor's kid playing "Mortal Kombat XVII" or whatever on a big-screen TV.

Maybe I'm being a little hard on Chow, who is a pleasant comic actor and a handsome if unmemorable screen presence. I haven't seen all his movies by a long shot (he's appeared in almost 60), but he generally plays minor variations on the same character, a scruffy outsider who turns out to have a heroic disposition and a heart of gold. (Unlike Lee, Chan, Jet Li, Sammo Hung, etc., he isn't a trained martial artist.) But a lot has changed in Hong Kong movies since the former British colony was returned to China in 1997, and for better or worse Chow seems to epitomize that process.

Remember that when the film industry whose delirious pop aesthetic had captivated the globe in the '80s and '90s came under the control of the "market socialists" in Beijing, nobody really knew what was going to happen. Jackie Chan, Jet Li, John Woo and other Hong Kong luminaries decamped to Hollywood, or at least tried to. The results haven't all been dreadful -- Woo's "Broken Arrow" and "Face Off" have their fans, Li has become an icon of the hip-hop generation and I suppose somebody must be enjoying Chan's recent movies -- but the general narrative has been one of diminishing returns, of talent sinking slowly in the swamp of prepackaged mediocrity that mainstream American moviemaking has become. I guess if Lubitsch and Billy Wilder had arrived in Hollywood circa 2000, they'd be making Sandra Bullock comeback vehicles or directing Ted Danson, Snoop Dogg and that Pepsi-commercial girl in "Three Men and a Li'l Bitch."

Back home, the Chinese film industry has inevitably become more global in focus, striving not just to bridge the gap between Cantonese-speaking Hong Kong and the mostly Mandarin-speaking mainland, but also to dominate screens all over Asia and export its movies everywhere else. The results of that have included humongous international productions like Ang Lee's "Crouching Tiger, Hidden Dragon" and Zhang Yimou's "Hero," and the ascent of a homegrown star like Chow, who seems (at least to this ignorant Westerner's eyes) to embody the goofiest, most sentimental and most nostalgic strains in Hong Kong cinema. Meanwhile, once-prominent directors like Tsui Hark, Sammo Hung, Ringo Lam and Ching Siu Tung have been not-so-subtly overshadowed. (It's been reported that Hung will direct David Hasselhoff in a movie version of "Knight Rider," and it's too gruesome a rumor not to be true.)

"Kung Fu Hustle" is vaguely set in pre-revolutionary China, maybe in the 1920s. The epic battle that pits the bad guys of the Axe Gang against the plucky inhabitants of a poor apartment complex called Pig Sty Alley could be happening in Shanghai or Hong Kong or some other city. But it's really set in a movieland noplace that evokes the so-called classics of the kung-fu-crazed '70s, in which some gesture was made toward costume drama before the whole thing degenerated into an endless round of ass-kicking and the quasi-historical set was totally destroyed.

Hey, that's a great genre, as far as it goes. But any time a filmmaker resorts to reminding viewers of the good old days -- when we were young, when the movies were fun and the streets were safe and life wasn't so darn complicated with cellphones and the Internet and all -- you're seeing signals of an art form in reactionary decline. When Hong Kong cinema was at its zenith, when Chan was making "Project A Part II" and Woo was directing the "Better Tomorrow" series and Tsui Hark was cranking out the "Chinese Ghost Story" epics, they sure weren't trying to convince us that the movies were better Way Back When.

As Chinese viewers and other old-school martial-arts fans will note with excitement, Chow's cast here is crowded with stars of another day. Pig Sty Alley, it turns out, is full of high-end Shaolin masters, living among the modest folk for reasons of their own. The henpecked Landlord who turns into the complex's leading defender is played by Yuen Wah, one of the great kung-fu villains of the '70s and '80s (he gets his clock cleaned by Bruce Lee in "The Chinese Connection"), while his domineering, cigarette-chomping wife is Yuen Qiu, one of the only female martial-arts stars of those years, who retired from screen acting in 1975. Their principal opponent, an imprisoned assassin called the Beast, is played by Leung Siu Lung, a '70s leading man with a legendary high kick who was almost as popular in his heyday as Bruce Lee or Jackie Chan.

We could go still deeper into the press notes: Minor roles are filled by kung-fu vets like Chiu Chi Ling (playing an offensive queeny gay stereotype) and Fung Hak On; the fight scenes are choreographed by the ubiquitous Yuen Wo Ping (of "Crouching Tiger," the "Matrix" movies and endless numbers of Hong Kong films); the cinematographer is Poon Hang Sang, who shot some of Tsui Hark, Ching Siu Tung and John Woo's best movies. If the question is what we get out of all this affectionate mining of history, well, it's a mixed bag. A large dose of Chow's trademark broad comedy, a romantic subplot that won't be too sexy or icky for 8-year-old boys, and a bunch of high-flying fight sequences that will make you nudge your companion (if you're that sort of person) and whisper: "Cool. It's like that scene in 'Eastern Wu-Tang Drunken Eagles' where that dude with a tentpole and a dinner plate fights, like, those 40 other dudes with flaming machetes. Remember?"

Listen, it's a fun movie. I should probably shut up and let you enjoy it. Yuen Wah and Yuen Qiu are priceless as the Landlord and Landlady, and Chow is generous enough to get out of their way for large chunks of the movie. You'll never see another kung-fu film with so many stars pushing 60 (if not 70). But that restless feeling you may experience partway through? That comes from noticing that Chow depends way too much on jokey computer graphics that make the whole thing feel like a superhero comic, instead of athleticism or charisma or good storytelling, and that "Kung Fu Hustle" wears itself out long before it's over. Maybe he's right; the movies really were better in the old days.