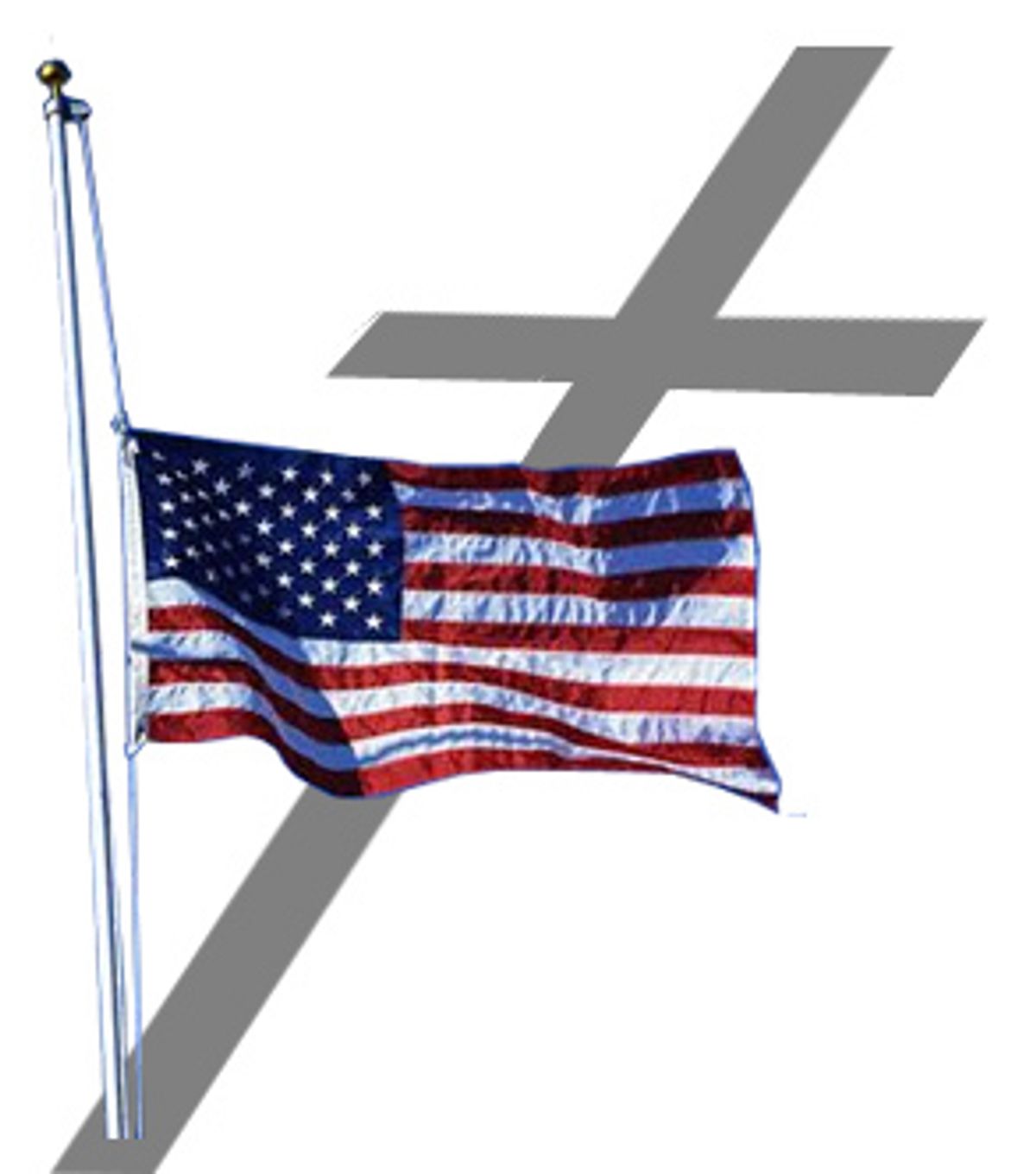 For the first time, an American president has lowered the American flag to half-staff for the death of a pope and, also for the first time, will attend a papal funeral. George W. Bush, a militant evangelical Protestant, deliberately inflects his political rhetoric with Catholic theological phrases, in particular the "culture of life," words he used to justify his unprecedented imposition into the case of Terri Schiavo, the brain-damaged woman whose feeding-tube removal was upheld 19 times by state and federal courts.

In the 2004 election Bush's campaign helped organize the attack on John Kerry's Roman Catholic authenticity by conservative bishops, who threatened to deny him communion. The White House coordinates both policy and personnel in line with right-wing Catholicism -- vetting not only issues like international population control, reproductive health and women's rights but also appointments. Only Catholics who meet the litmus tests receive jobs.

Since the accession of Pope John Paul II the conservative mobilization within the American Catholic Church has been a microcosmic version of the ascendancy of the conservative movement in America generally. The dual reactions against liberalism have paralleled each other and intersected. As the Vatican marshaled its authority on behalf of conservatives, the Republican right adopted those positions as its own in order to capture Catholic votes. Now the social agendas of conservative Catholics and Republicans are indistinguishable.

John Paul II admired and welcomed American democracy as a counter to communism, but he had no experience with democracy of any kind. He envisioned his mission as restoring the traditional authority of the church. America appeared to him as a Platonic ideal of moral debauchery, a liberal inferno -- Americans, he lectured U.S. bishops last year, were "hypnotized by materialism, teetering before a soulless vision of the world."

The pope firmly asserted his control over the American church in 1984 with his naming of arch-conservatives as archbishops of Boston and New York, Bernard Law and John O'Connor, who became his chief agents. At the same time, the Vatican refused to deal with the elected officers of the U.S. Conference of Catholic Bishops, who were largely imbued with the liberalizing spirit of Vatican II. While the pope articulated positions on poverty, war and capital punishment, conservatives elevated his stands on abortion, contraception, and later stem cell research and gay marriage above all others for the protection and propagation of the faith.

The late Cardinal Joseph Bernardin of Chicago was generally acknowledged as the leader of the bishops and represented the broad progressive tradition of the American church. He articulated the concept of Catholicism as a "seamless garment" in which abortion was only one among many important issues. In 1994, he announced a Common Ground Initiative subtitled "Church in a Time of Peril," calling on the church to overcome its polarization and suppression of discussion on the issues tearing it apart, from women's changing roles to the fact that most Catholics did not accept most church teachings on sexuality to the declining numbers of priests. Bernardin was a consensus builder and believed he had touched all bases with the Vatican before unveiling his project. But the day the initiative was announced, Cardinal Law, clearly acting with Vatican authority, denounced it: "The fundamental flaw in this document is its appeal for 'dialogue' as a path to 'common ground.'"

Bernardin died months later and was replaced by a protégé of Law's. In 2002, the Boston Globe began running the first of more than 250 stories on rampant pedophilic molestation by parish priests. Law resisted investigating the sex scandal and faced potential criminal prosecution for his coverups. The pope rescued him with a sinecure in the Vatican. In the aftermath of the scandal, conservatives under siege lashed out more ferociously. As they saw it, their failure to overturn the law on abortion demonstrated that they had not been hard-line enough. Thus the sex scandal set the stage for the right-wing Catholic offensive on behalf of Bush in the 2004 campaign.

With the pope's death, American Catholics yearn for discussion and change. According to a recent Gallup poll, 78 percent want the next pope to allow Catholics to use birth control, 63 percent say he should let priests marry, 59 percent believe he should have a less strict policy on stem cell research, and 55 percent think the next pope should allow women to become priests.

But Republicans are moving even more aggressively on their conservative social agenda. This week, Kansas banned gay marriage in a referendum. Four states have passed bills permitting pharmacists to refuse to fill prescriptions for contraceptives. The governor of Illinois has felt compelled to issue an emergency order to ensure that pharmacists fill all prescriptions, and California's Legislature is debating a law to require druggists to fill doctors' orders.

By centralizing and consolidating power the pope believed that he was strengthening the church. Now conservatives want a post-John Paul papacy to extend his stringency. Others want moderation, openness and a loosening of the authoritarian grip. After John Paul, Catholics in America do not hold the same principle of hope. No one monitors the church's crisis more closely than the Bush White House, and no one plots to exploit its division more ruthlessly. Religion is politics under red robes. So Bush travels to Rome.