"Enron: The Smartest Guys in the Room"

This movie about America's biggest corporate collapse is part of a new breed of film, more agitprop than documentary. 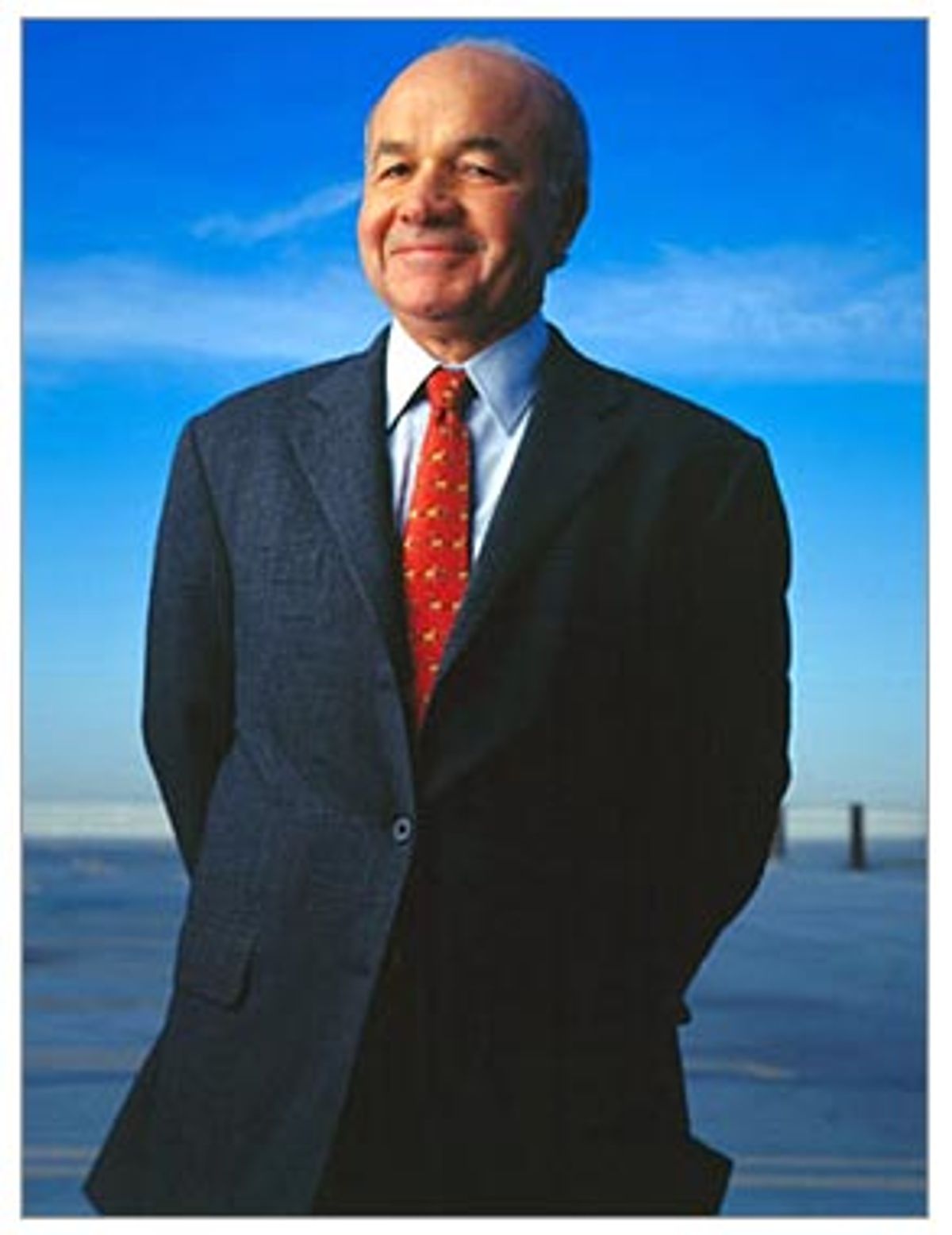 If you thought the cascade of post-"Fahrenheit 9/11" agitprop films had slowed to a trickle after last fall's election, you're probably right. But the legacy of Michael Moore's unlikely box-office smash is likely to be a long one; muckraking nonfiction films like Jennifer Abbott and Mark Achbar's "The Corporation" or Alex Gibney's new "Enron: The Smartest Guys in the Room" are becoming the left wing's answer to talk radio. Like Rush Limbaugh and Sean Hannity, these kinds of movies -- which mostly play in art-house theaters in major cities and college towns -- reach an audience almost exclusively composed of like-minded people.

Someone more dispassionate than I might argue that there are further similarities between talk radio and lefty agitprop movies (I hesitate to call them documentaries): Both could be seen as making valid points about the nature of power in America -- the oligarchic power of the elite establishment or the quasi-fascistic power of big capital, as the case may be -- that become dangerously clouded by ideological zeal and the quest for entertainment value.

I don't want to complain overmuch about Gibney's "Enron" film, which is based on the outstanding book "The Smartest Guys in the Room" by Fortune reporters Bethany McLean and Peter Elkind. As McLean says in the movie, the story of America's biggest corporate collapse is not about numbers -- as massively fraudulent as Enron's earnings turned out to be -- it's a human drama and a human tragedy. Gibney convinced several former Enron employees to talk on camera, unearthed a fascinating (and often chilling) trove of internal Enron audio and video recordings, and relies simply on McLean and Elkind's ability to tell the story when nothing else will do. (Peter Elkind is an old journalistic acquaintance of mine, but I haven't spoken to him in several years.)

What emerges is a tale as fatalistic as anything in Sophocles: The now-notorious Kenneth Lay and Jeffrey Skilling built a midsize gas-pipeline company called Enron into the poster child for a new economy of free markets and deregulation, but the sins they committed along the way guaranteed a stupendous collapse. Neither Lay nor Skilling cooperated with Gibney's film (to nobody's surprise) but the portrait he paints of them is strikingly convincing. Enron's dynamic duo -- especially Skilling, the company's self-appointed Big Thinker -- convinced themselves that some high-powered rhetoric and MBA-thesis ideas would carry them to immense profitability.

It worked, at least for a while, and along the way the Skilling-Lay regime built a corporate culture of true believers that some insiders compared to Jonestown. An even better comparison might be Stalinist Russia or Chairman Mao's Cultural Revolution: Not only did Enron require its troops to believe in untested ideas about how energy could be bought and sold, and in enormous profits that were entirely hypothetical, it also staged periodic public purges in which the bottom-rated 15 percent of employees were identified through a peer-review process, and then summarily fired.

Gibney's various informants depict an executive setting where Lay and Skilling reinforced each other's dysfunctional view of the company. "Kenny Boy," as the president of the United States has been known to call him, seems to be a Texas gas-and-oil bloodhound of the old school, his eye always on the bottom line. (Try as he may, Gibney can find no direct connection between George W. Bush and the Enron collapse, although it's clear that Lay was a close friend of the Bush family until, rather suddenly, he wasn't.) What he lacked was intellectual heft and ideological intensity, and Skilling, a Harvard MBA and deregulation apostle, supplied those in spades.

Then Lay and Skilling found a valuable foil in Andrew Fastow, a manifestly shifty young man who became Enron's chief financial officer and, at the same time, the head of two different private-equity funds set up to do business with Enron (and, essentially, to cast an even darker shadow across Enron's already murky financial condition). Fastow seemed to have no scruples about manifestly unethical and indeed illegal behavior, and he also made a useful fall guy when the high-flying company began to come undone in 2001.

Lay, Skilling and Fastow were intelligent, arrogant and to some degree self-deluded, and like Mao or Stalin they were not completely able to control what they had unleashed. The most electrifying moments in "Enron" lie in the audio and video recordings Gibney has dug up, in some cases from court records and in others from confidential sources. We see Skilling participating in a self-mocking company skit about his big new idea, an accounting standard based on the hypothetical future value of nonexistent transactions. (In fact, this was exactly what he and Fastow were doing to generate Enron's purported profits.)

We hear telephone calls among Enron's young macho cadre of electricity traders -- Skilling's Red Guard, if you will -- as they manipulate the bewildering rules of the California energy market, drive the price of power to astronomical levels, and create the phony rolling blackouts of early 2001. One observes, with frat-boy mock-compassion, that they are turning out the lights on "Grandma Millie" and then sticking the high prices "right up her ass." Another says, "There's plenty of power available -- for the right fuckin' price." One hopes that the Golden State will simply break loose and drift out to sea: "Let 'em use candles."

Gibney's point, in large part, is that the ideology Skilling believed in so fervently -- basically, that deregulated markets and intelligent corporate self-interest would lead to bigger profits and a more efficient energy system for all -- was dangerously misguided. (It's not clear that Ken Lay ever believed in anything, except that making a lot of money was an excellent thing.) Enron's California "experiment" was nothing short of a rape-and-pillage operation, and the Enron story in total suggests that greed makes businesspeople do evil and stupid things, and trumps any long-term rational view. Lay, Skilling, Fastow and other top Enron executives walked away from the collapse with more than $1 billion, while ordinary employees, retirees and shareholders lost virtually everything. (Fastow has forfeited almost $30 million of his rake-off, and faces a 10-year prison sentence. He will testify against Lay and Skilling when their criminal trials begin next January.)

This is a very important argument -- it's essentially the same argument raised by "The Corporation," which is why I raised that film earlier -- and one that needs to be raised in a culture as drenched in the core values of capitalism as ours is. Enron was far from a fluke, or a rogue operation; it was late-'90s American business at its finest, embraced by almost every leading financial analyst and commentator. If it looks in the rear-view mirror like a wacko cult run by thieves, liars and maniacs, what does that tell us about the functioning of the so-called free market (which was trading Enron at $90 a share as late as August 2000)?

Those who see Gibney's "Enron" may well find themselves convinced, but as I said earlier, they're the least likely to need convincing. Understandably, Gibney wants his movie to have some entertainment value, and not to look like a segment of "60 Minutes" or Bill Moyers' "Now" -- so he relies on the kinds of cheesy visual tricks that make it look like a segment of "Unsolved Mysteries" instead. Fuzzy-faced actors "reenact" key scenes from the story; major deals are signified by burlap sacks marked with dollar signs, or unintelligible screens of fake stock-market data. When we hear about Skilling's self-reinvention as a macho motorcycle type, we see unrelated videotape of a motocross race (he was never involved in any such thing).

The effect of such quasi-fictional techniques, I suspect, is subtle but highly unfortunate; it injects the whole enterprise with what you might call epistemological bogosity. I don't envy a filmmaker like Gibney the choice between looking boring and looking phony, between attracting only the earnest PBS audience and creeping toward the realm of tabloid TV. Speaking personally, I believe that everything in "Enron" is true and rigorously sourced, and that the story of Enron is just the story of American capitalism in its most dramatic form. I also believe that subject matter this important deserves more honest, more direct and simpler treatment. Amid the infoglut that surrounds us, Gibney's film feels too much like more noise. Is it telling the most important business story of our lifetimes, or is it just another fantastical yarn, crammed into the schedule after Scott and Laci Peterson, but before Charlemagne and the ancient Peruvian astronauts?