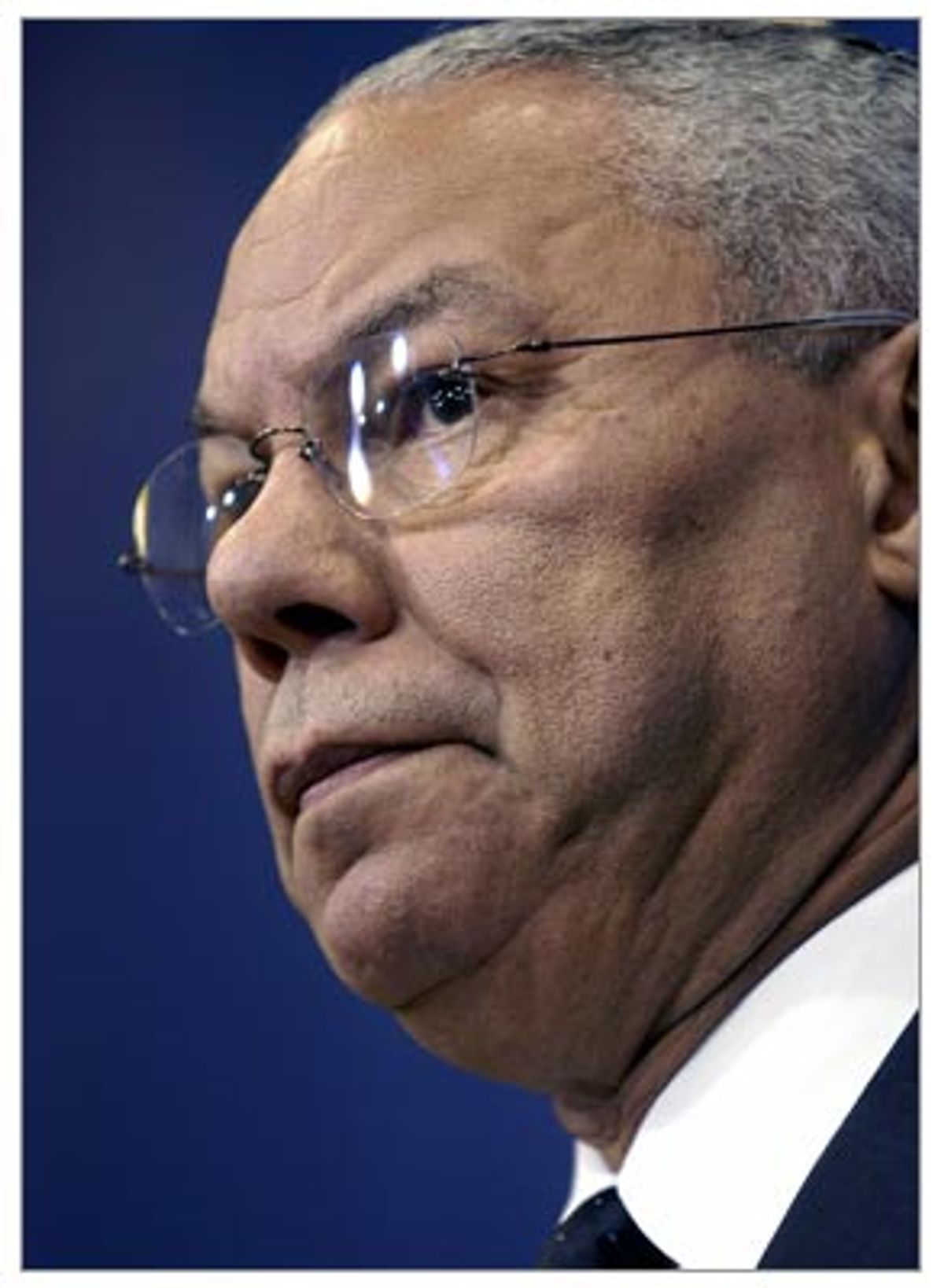 From the redoubt of his retirement, former Secretary of State Colin Powell is beginning to exact revenge. His sterling reputation was soiled when he lost most of the important battles within the administration during President Bush's first term. Although he lamented that he had been "deceived" into presenting false information before the United Nations to justify the Iraq war, he acted as the good soldier to the end, giving every sign of desiring to fade away. But now he has reemerged to conduct a campaign to defeat Bush's nomination of conservative hard-liner and former Undersecretary of State John Bolton as U.S. ambassador to the United Nations.

In seeking to prevent the bullying and duplicitous ideologue from representing the United States before the international organization, Powell is engaging in hand-to-hand combat with his successor. Secretary of State Condoleezza Rice's first true test has not arrived from abroad. Caught by Powell's flanking movement, she is trapped in a crisis of credibility, which she herself is deepening.

Powell's closest associate, his former deputy Richard Armitage, is orchestrating much of the action. Senators who are wavering on Bolton are directed to call Powell, who briefs them on Bolton's demerits. And Powell's former chief of chief, Lawrence Wilkerson, has surfaced to give an interview to the New York Times, declaring that Bolton would be "an abysmal ambassador." Other former Foreign Service officers have queued up to provide ever uglier details of Bolton's career as a "serial abuser" and "a quintessential kiss-up, kick-down sort of guy," as Carl W. Ford Jr., the former director of intelligence at the State Department, described him before the Senate Foreign Relations Committee.

Rice's response to the seemingly endless stream of witnesses has been to order the State Department's senior staff to stanch the flow of adverse stories. "This whole building knows how Bolton dealt with people," a dismayed senior State Department official told me. "If she is sending a different signal than Powell sent, that will be difficult. The muzzle is being put on; the damage is being done. To the extent it's buttoned up here, it's dangerous for the secretary. Powell and Armitage created an environment of accountability about treatment of the staff. Any kind of allegation that you did things like Bolton was death in the Foreign Service. Persons were removed. Now she's trying to be a team player, trying to support someone Powell ostracized."

Indeed, last year Powell and Rice had a confrontation over an allegation that a National Security Council officer close to Rice, Robert Blackwill, had physically assaulted a female Foreign Service officer. Initially, Rice tried to protect him. But Powell and Armitage presented the evidence to her and told her that if she didn't discipline Blackwill the matter would be made public. Blackwill was forced to resign. And after Bolton attempted to coerce a State Department intelligence officer to agree to an unfounded report about nonexistent Cuban WMD, Powell personally assembled the entire intelligence staff to instruct them to ignore Bolton.

When British Foreign Minister Jack Straw complained to Powell that Bolton was obstructing negotiations with Iran on its development of nuclear weapons, Powell ordered that Bolton be cut out of the process, telling an aide: "Get a different view." The British also objected to Bolton's interference in talks with Libya, and again Powell removed Bolton. But much as he may have wanted to, Powell could not dismiss Bolton because of a powerful patron: Vice President Dick Cheney.

The Bolton confirmation hearings have revealed his constant efforts to undermine Powell on Iran and Iraq, Syria, and North Korea. They have also exposed a most curious incident that has triggered the administration's stonewall reflex. The Foreign Relations Committee discovered that Bolton made a highly unusual request and gained access to 10 intercepts by the National Security Agency, which monitors worldwide communications, of conversations involving past and present government officials. Whose conversations did Bolton secretly secure and why?

Staff members on the committee believe that Bolton was likely spying on Powell, his senior advisors, and other officials reporting to the secretary of state on diplomatic initiatives that Bolton opposed. If so, it is also possible that Bolton was sharing this top-secret information with his neoconservative allies in the Pentagon and the vice president's office, with whom he was in daily contact and well known to be working in league against Powell. If the intercepts are ever released, they may disclose whether Bolton was a key figure in a counterintelligence operation run inside the Bush administration against the secretary of state, resembling the hunted character played by Will Smith in "Enemy of the State." Both Republican and Democratic senators have demanded that the State Department, which holds the NSA intercepts, turn them over to the committee. But Rice so far has refused. What is she hiding by her coverup?

Rice's rise has been dependent on her unwavering devotion to the president; in the Bolton case, she is again elevating loyalty to her leader above all else. Will Powell lose once more? But beyond the general's revenge, Rice's fealty, Bolton's contempt or even presidential prerogative, this episode also points to a gathering storm over constitutional government.