Is drug humor like Dave Chappelle's a cry for help? 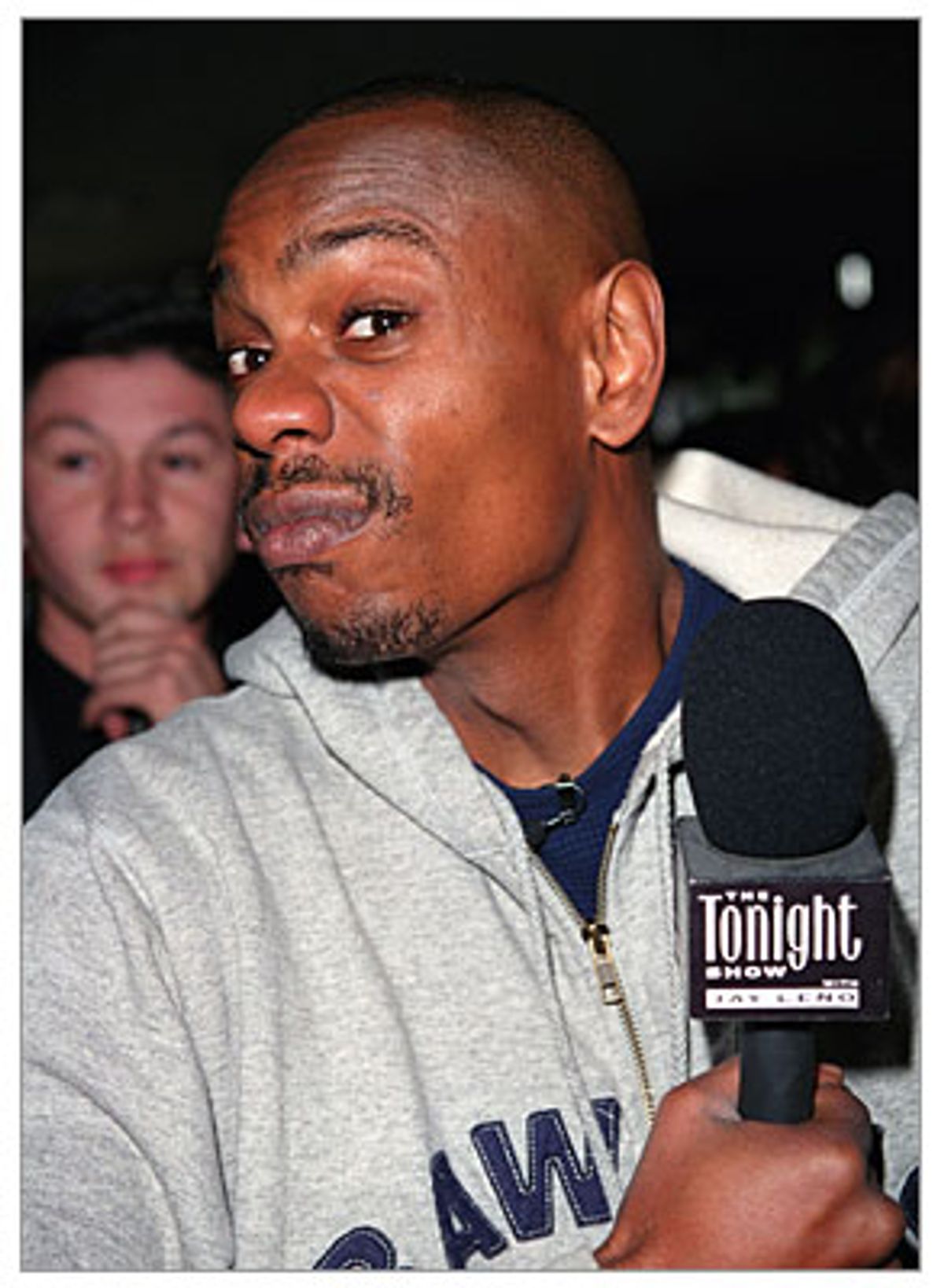 The news that Dave Chappelle has checked himself into a mental-health clinic in South Africa quickly filled the Internet with the usual toxic mix of celebrity worship and Schadenfreude. At first, my reaction didn't diverge much from this. I think Chappelle is hilarious, but a year or so ago, when I hit a basement of burnout and self-loathing, I didn't have the option of hiding on the other side of the world. I got a prescription for Wellbutrin and hoped that this, too, shall pass. Things would have been a lot easier, as they would be for anyone, if I'd had a $50 million contract with Viacom.

Still, this is different than the usual glee felt when, say, Tara Reid's boob flops out of her dress or when Lindsay Lohan goes on some ridiculous slutbag spree. There's a special joy in watching the reaper scythe of fate swoop down on the talentless and sleazy. With Dave Chappelle, it's different. Not only is he uniquely talented, he's also honest about his failings. And it's impossible now not to assume that his parodic portrayals of mentally disturbed loners are so dead accurate because he obviously knows the subject all too well.

If you've been stoned even once in your life, stoner humor is funny. Jokes about alcoholism are as old as alcohol; almost everyone can relate to getting drunk. But hard-drug humor is different. Cocaine may be as prominent as dumplings on the Lower East Side, but for most people, it's as abstract as ayuhuasca. So this forces me to ask the question: Why do we laugh at Dave Chappelle? Can we really relate to a coked-up lunatic shooting dice, or to a junkie puppet singing about venereal disease? Chappelle may be America's most incisive and original comic mind on issues of class and race, but that's not what frat boys are thinking about when they buy his DVDs. It's "I'm Rick James, bitch," all the time. Chappelle made his own choices, and, like the rest of us, he has to live with the consequences, even if he is better funded. It's not our fault. But if that's true, why do I feel guilty for laughing?

Not all drug humor is a cry for help. I don't think the writers of "Harold and Kumar Go to White Castle" were trying to tell us something was wrong. Cheech and Chong, Paul Krassner and pre-"Daily Show" Jon Stewart enjoyed getting high and enjoyed talking about it. The "Marijuanalogues" aren't popular in New York because fans are conducting a death watch on the comedians who participate. At the same time, not all problem comedians tip their hands through drug jokes. Chris Farley didn't do drug comedy, and neither did John Belushi, really, but they obviously needed help. You can also see when there are no drugs, and there are no problems. No one is worried that Jerry Seinfeld is heading for a coke-addled fall, or that Stephen Colbert is going to vomit on himself in public.

On the other hand, if a comedian does appear to be crying for help, drugs are usually involved. In a way, comedy and drug abuse spring from the same source. Life is cruel and absurd, and both represent escape, which is why fans of drug comedy worship at their dual altars. Mitch Hedberg recently died the lonely, Lenny Bruce-style romantic comedian death -- alone, in a motel room, with drugs involved. Hipsters who made fun of the pope and Terri Schiavo spun no mockery about Hedberg, because his death, unlike those others, actually made them sad. Like them, he was supposed to be a cool, dispassionate observer of life's grand carnival. He died how they'd like to in their dreams, as did Hunter Thompson.

There's something wrong in a culture when it's considered cool to wake up at dusk, do a lot of drugs, and stick a rifle in your mouth while your son is home. When people said, "It's not like you couldn't see it coming," that made me very sad, not because we could have done something to stop Thompson's suicide because, of course, we couldn't have, but because we found it entertaining, or even important. We're making a large mistake if we think that life is art, or even bleakly funny, when it reaches such a place. Because it's not art. It's just darkness.

My hope for Dave Chappelle, an abstract hope for someone I don't know and never will, is that he pulls himself out of whatever muck is holding him down. Maybe he'll follow the example of Richard Pryor, one of the few comics to come out of the drug vortex on the other side, and turn his experience into confessional humor that is grown-up and true. But there's certainly a chance that he won't, that he'll go the way of Rick James, bitch, not Richard Pryor, and that's not funny at all.