It's no touchdown, but this prison-football remake -- starring Adam Sandler and Chris Rock -- isn't a total fumble, provided you overlook the rampant homophobia. 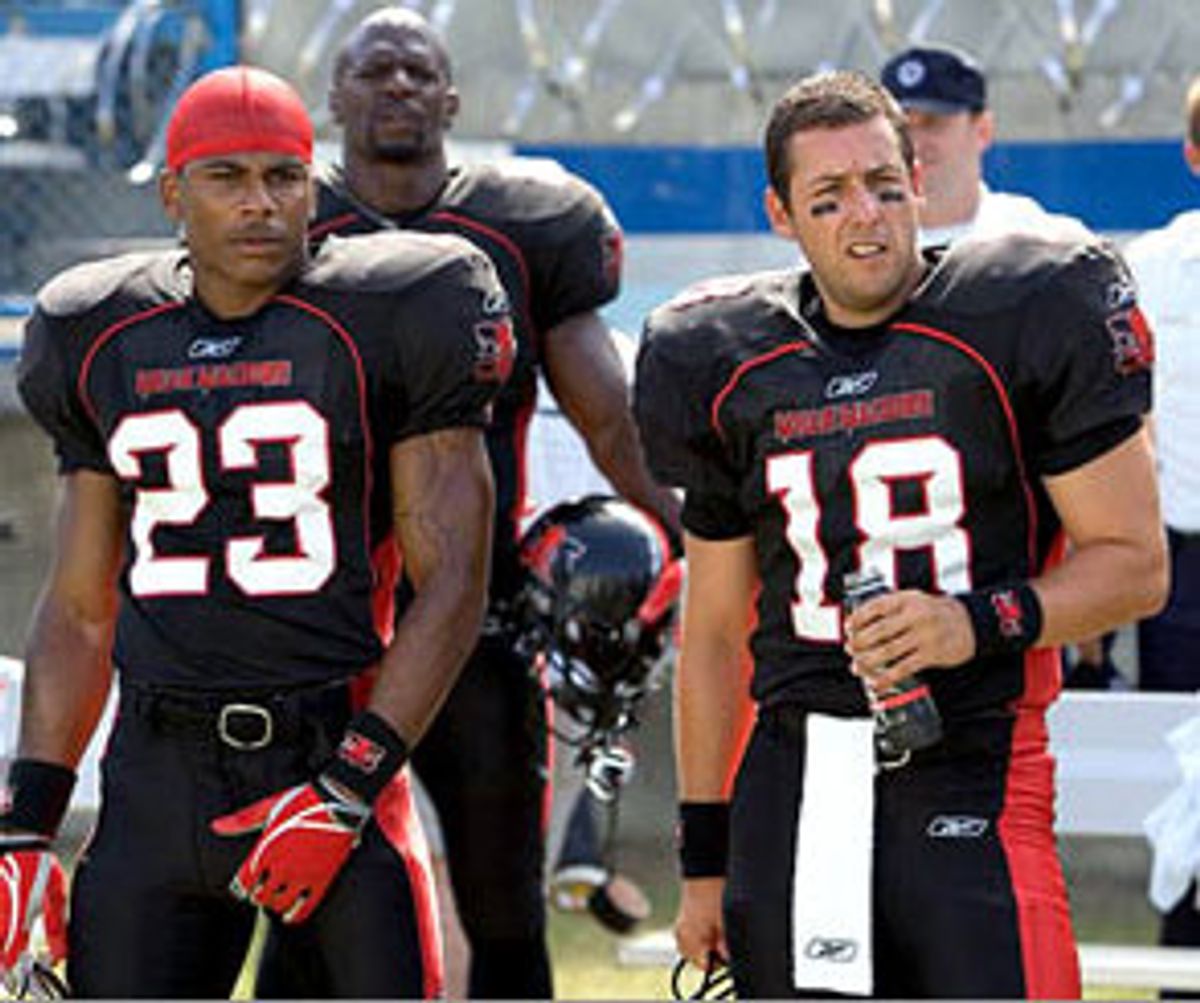 If you look at this remake of the 1974 prison-football hit "The Longest Yard" as a matter of simple arithmetic, it works pretty well: It's about one-fifth nostalgia, two-fifths salt-'n'-pepper buddy comedy and two-fifths skull-rattling gridiron action. It's also five-fifths homophobic humor, because, by gum, if there's one thing we can still laugh about in this age of feminism and political correctness and the widespread castration of true manliness, it's jailhouse sodomy. If that adds up to some number larger than one, well, what do you want, Poindexter? A football game or an A in calculus?

Is this a completely formulaic motion picture without a single surprising moment? Yes. Is it more like a comforting and familiar ritual, in which the little guy wins a symbolic victory against his smirking oppressor, than a story in which you actually don't know what's going to happen? Also yes. But maybe that's what most movies are most of the time to most viewers; it just isn't always this obvious.

Setting such larger aesthetic questions aside, there isn't much to dislike about "The Longest Yard," at least once you've gotten used to the pervasive fear of homosexuality that seems to ooze from the film's pores. It's moderately amusing (and it should be, with the expensive comic talent onboard). It's crudely but competently directed, and the extended guards-vs.-prisoners football action is rousingly choreographed. It may lack the dramatic punch of Robert Aldrich's original, but then most of that film was borrowed from better prison flicks like "Cool Hand Luke" in the first place and has grown hackneyed and crumbling with age.

Adam Sandler gets top billing as disgraced NFL quarterback Paul Crewe, the role snickered through by Burt Reynolds three decades ago. If Sandler might not be your first choice to play a fallen All-American, join the club. Does he pull it off? I suppose so. He has clearly worked out and beefed up, and strives to play the character with a maximum of laconic 'tude and a minimum of nebbish. (The film's only nod to the fact that Sandler's ethnic origins are somewhat different from Reynolds' comes when Crewe raises a glass of cellblock hooch and proclaims, "L'chaim!")

Perhaps the screenplay explains why an athlete who apparently lived in San Diego is sent to a prison in dusty rural Texas, but if so I missed it. The real reason, of course, is that tumbleweeds, circling buzzards and bemuscled guards in Stetson hats are crucial accessories for any prison movie worth its dropped soap, and if we have to ignore the namby-pamby rules of plausibility and constitutionality, tough crap.

Crewe is shunned by most inmates -- better a child molester than a point-shaving QB, I guess -- but comes under the wing of Caretaker (Chris Rock), the obligatory prison "fixer" who for the right price can acquire whatever goods and services, legal or not, you may desire. When Crewe asks about the company of a beautiful woman, Caretaker tells him he may have to revise his expectations on "beautiful" and also on "woman," but assures him that after a few months the prison transvestites will "look like Beyoncé."

Rock isn't really an actor; Caretaker is pretty much just Chris Rock delivering his usual racially discomfiting shtick and more or less remaining within the channels of the movie. When Crewe can convince only one African-American inmate (played by the rapper Nelly) to join his new football team, Caretaker quips: "We couldn't get the whole chocolate bar, but we got a Hershey's kiss!" One presumes that no self-respecting screenwriter, of whatever race, could write that line and then sit there and look at it on the computer screen.

You don't actually expect me to lay out the plot, do you? If you've seen any sports movie since about 1980, you've probably seen this one, in which a gang of ragtag underdogs (here, the prisoners) take on a well-funded, tightly disciplined team of tough guys in clean uniforms (the guards). Guess who wins? Furthermore, this isn't the first remake of Aldrich's "Longest Yard"; British director Barry Skolnick used exactly the same characters and story for the 2001 soccer film "Mean Machine."

In the Ed Lauter role of the brutal prison guard who proves, in the end, to be a man of honor, William Fichtner probably gives this film's most convincing major performance. But much of the excitement in "The Longest Yard" comes from the minor roles, especially the running back played by Nelly (a charismatic charmer) and the stone-faced receiver played by former NFL great Michael Irvin, who takes on Sandler in a memorable game of one-on-one basketball. And yes, Burt Reynolds himself appears as the older inmate who ends up coaching the prisoners. He's likable enough, but is nowhere close to the screen presence he once was, thanks in large part to TMAF syndrome. (That's Too Many Apparent Facelifts.)

Physically, Sandler pulls off the quarterback role pretty well. I've never actively disliked him the way a lot of critics do, and I'm all in favor of movie stars who take chances or try to, as they say, stretch dramatically. But I don't think Sandler has the charisma or, let's face it, sexual magnetism to hold down a movie where he's not playing a genial Everyguy goofball. Burt Reynolds at his peak had a sardonic heartland suavity that women ate up like bonbons and men yearned to emulate. Adam Sandler? A nice kid, but forget about it.

People will go see "The Longest Yard" for all sorts of reasons -- its lively humor, the current of violence that's just under the surface, its message of underdog racial reconciliation, or the fact that there's no actual football to watch on TV in June. They may even see it for the novelty of a popular entertainment that views prisoners as complicated, sometimes sympathetic human beings (which seemed less odd in the '70s than it does today). But will they buy Sandler as a Hollywood hunk -- and are they so insecure that they must be hammered with such relentless homophobia? Those are questions. I fear the answers.