The battle over Bush's Supreme Court nominee was supposed to be epic -- so why hasn't it even started yet? 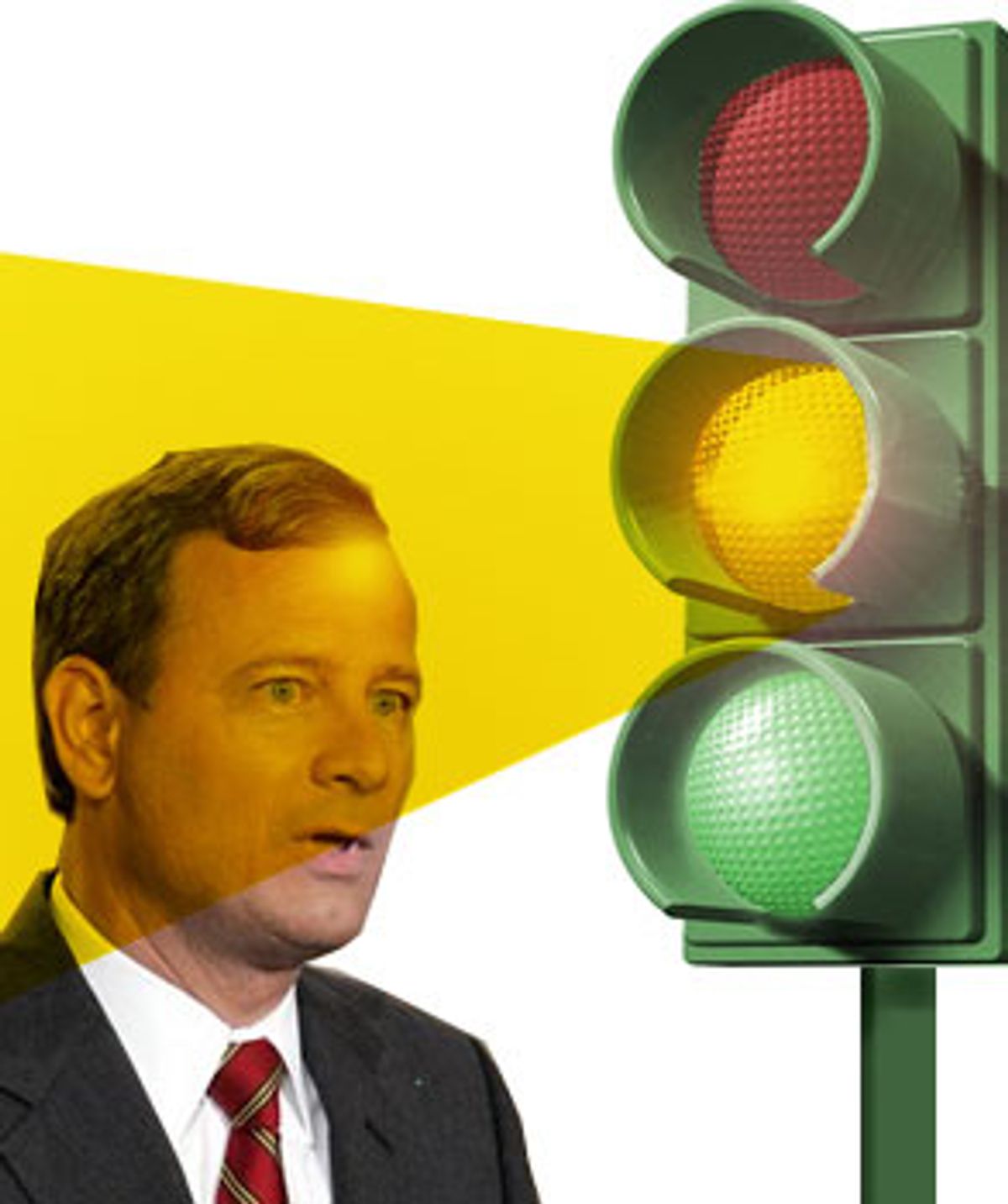 No one in Washington fights federal court nominees like Nan Aron, the president of the Alliance for Justice. Over the last 20 years, she has opposed Supreme Court justices William Rehnquist, David Souter, Antonin Scalia and Anthony Kennedy. She helped sink the hopes of Reagan appointee Robert Bork, and when Clarence Thomas was nominated, she was the one who leaked word to Senate staff -- after picking up on dinner party gossip -- that a woman named Anita Hill had a story to tell.

More recently, Aron led the charge on Capitol Hill to filibuster President Bush's most extreme Circuit Court nominees. Those fights, she suggested at the time, were just a preview. There would be a "firestorm of opposition" if President Bush nominated a Supreme Court justice, as he had promised, in the mold of Scalia.

Now the country faces a nominee, John G. Roberts Jr., whom prominent conservatives have likened to a Scalia "without the fireworks." But more than a week after the nomination, Aron says she is not ready to oppose Roberts. "We're doing our best to press the senators to do a full and thorough investigation," Aron says instead, sitting in her office that overlooks Washington's Dupont Circle on Tuesday. "I don't know what the record will show."

Such words do not come easily to the head of the Alliance, the umbrella group for more than 70 environmental, consumer and civil rights groups. Aron has known for years that Roberts was in the pipeline for the job, but she also knew there was little public information to evaluate his record. "I've long assumed that once John Roberts was confirmed for the D.C. Circuit that just like Clarence Thomas and Antonin Scalia, he was headed to the Supreme Court," Aron says. "I also knew, based on his thin public record, he would be the hardest nominee to challenge."

That premonition helps explain the early success of President Bush's nominee rollout. While Roberts smiled for the cameras, liberal interest groups spent much of the last two weeks on the sideline, muted by everything they do not know. Gone, at least for now, are clear threats of a "divisive confirmation battle" or warnings that a conservative pick would cause a "constitutional catastrophe." President Bush picked a judge of the highest reputation and credentials, a corporate lawyer with Democratic friends, the looks of a Boy Scout leader, and a family that evokes Kennedy comparisons. But all those advantages pale in comparison to his most appealing quality for Republicans: Roberts lacks any substantive public record that advocates like Aron could use to mount their attacks. Pro-life, anti-gay rights, and pro-business conservatives are happy with the selection. But for many liberal groups, he remains hidden in plain sight.

Lacking a smoking gun, interest groups on the left have found themselves, at least initially, divided on message. Most of the large pro-choice and women's rights groups, including NARAL, the National Organization for Women, and the Feminist Majority, have opposed Roberts as a direct threat to legal abortions and the health of women. They have been organizing letter-writing campaigns, planned a national "call-in day" for the Senate, and launched new fundraising appeals. They point to the work Roberts did on behalf of the first Bush administration opposing Roe v. Wade.

By contrast, groups like the Alliance for Justice and People for the American Way -- two of the organizations that warned of an all-out war with the White House -- have taken a wait-and-see approach. They distinguish between his work as an attorney for a client and his own personal views. "If we are asking the Senate to be careful and deliberate, then we have to, in the same way, take the same stance," says Karen Pearl, the interim president of Planned Parenthood Federation of America, a member of the Alliance for Justice.

Instead of railing against Roberts, the larger groups have crafted a far more procedural set of talking points. "The White House Must Release Information," blares a recent press release from People for the American Way. "The American people must know the whole truth," reads an Alliance release. "It's not sexy," Kelly Landis, a spokeswoman for the Alliance, says of the more nuanced approach. "I never claimed it was sexy. It's nevertheless a vitally important message."

Tuesday's release of documents from Roberts' time in the Reagan Justice Department provides some hint of what the liberal interest groups hope to find out. It is the first of what promises to be a steady stream of new documents emerging from the archives of the Reagan and George H.W. Bush administrations. More important, the professional memos show Roberts writing about his own views, not those of his client. The first batch include memos showing that Roberts argued for the possibility of restricting the Supreme Court's ability to weigh in on cases regarding abortion, school prayer and school busing. He also argued for a narrow interpretation of Title IX, the law that calls for sex equality in athletic funding, and criticized the "perfectly circular" arguments he found in a report that defended affirmative action.

The White House has so far refused to release similar documents from Roberts' time as deputy solicitor general for President George H.W. Bush, saying it needs to protect attorney-client privilege.

Aron hopes the release of documents shedding light on Roberts' views will help avoid a repeat of his 2003 confirmation hearings to the D.C. Circuit Court. At the time, Roberts came before the Senate with glowing recommendations and almost no public record. Nonetheless, Republicans seemed determined to get him through committee with a minimum of scrutiny. Then-Judiciary Committee chairman Orrin Hatch, R-Utah, scheduled a hearing on Roberts with two more explosive Circuit Court nominees, Deborah Cook and Jeffrey Sutton. Pressed for time, Democrats focused their questions on the two nominees with the longest records. "I was up there," Aron says of the hearings. "That was a horrible day."

Roberts passed out of committee, but only as part of a compromise with Sen. Hatch, a deal that would allow Democrats to block other nominees. "Democratic Committee staff had a lot of concerns of Roberts at his hearings in 2003," says a former committee staffer. "But he was allowed a vote as part of an agreement for Republicans to reinstate the committee filibuster rule." When he reached the full Senate, Democrats asked for unanimous consent to pass Roberts. Worried that he might later be nominated to the Supreme Court, they did not want to have their votes for him on the record.

No one expects Roberts to get such an easy pass this time around. "When I talk to Republicans in the Senate side, they don't think the fight is over," says Grover Norquist, a GOP stalwart who regularly consults with Karl Rove and Senate leaders. "I think the left's divisions are tactical." Liberal groups, he says, are probably just keeping their powder dry for the September hearings, or for another nominee. "It would be smart for the left to say, 'Do we really want to have that fight now, and lose the ability to have it in the future?'"

In the meantime, the Alliance's offices continue to operate on a war footing. About 20 interns and lawyers have been brought in for the summer, lining the corridors with fresh-faced men and women in their 20s, who sit at cramped desks. They publish a podcast and several Web sites, a blog, and, according to Landis, hold the trigger of an e-mail list of about 30,000 "e-activists throughout the country ready to take action and organize at a moment's notice." In his office, Adam Shah, the Alliance's 32-year-old senior counsel, sits behind a desk overrun with paper. Nearby, he has stacked thousands more pages, the briefs from Roberts' past cases. "As a judge he has sat on 400 cases," says Shah. "He has only written 44 of those. And only five of them are cases in which one of the judges disagreed."

To date, those five cases have provided only the smallest window into the mind of Judge Roberts. Aron, whose office is decorated with the roll call vote from her attempt to block the nomination of former Attorney General John Ashcroft, can do little more at this point than demand more information. "This is an individual who has been a part of every significant legal issue facing this country for the past 20 years," Aron explained. "It's obvious he has views."

It's just not obvious what they are. For now, that means Roberts is well on his way to a new, lifetime job.