From Gulf to shining Gulf

Bush's responses to the crisis in Iraq and the aftermath of Katrina are jarringly repetitive. Are his speechwriters using a computer's copy-and-paste function? 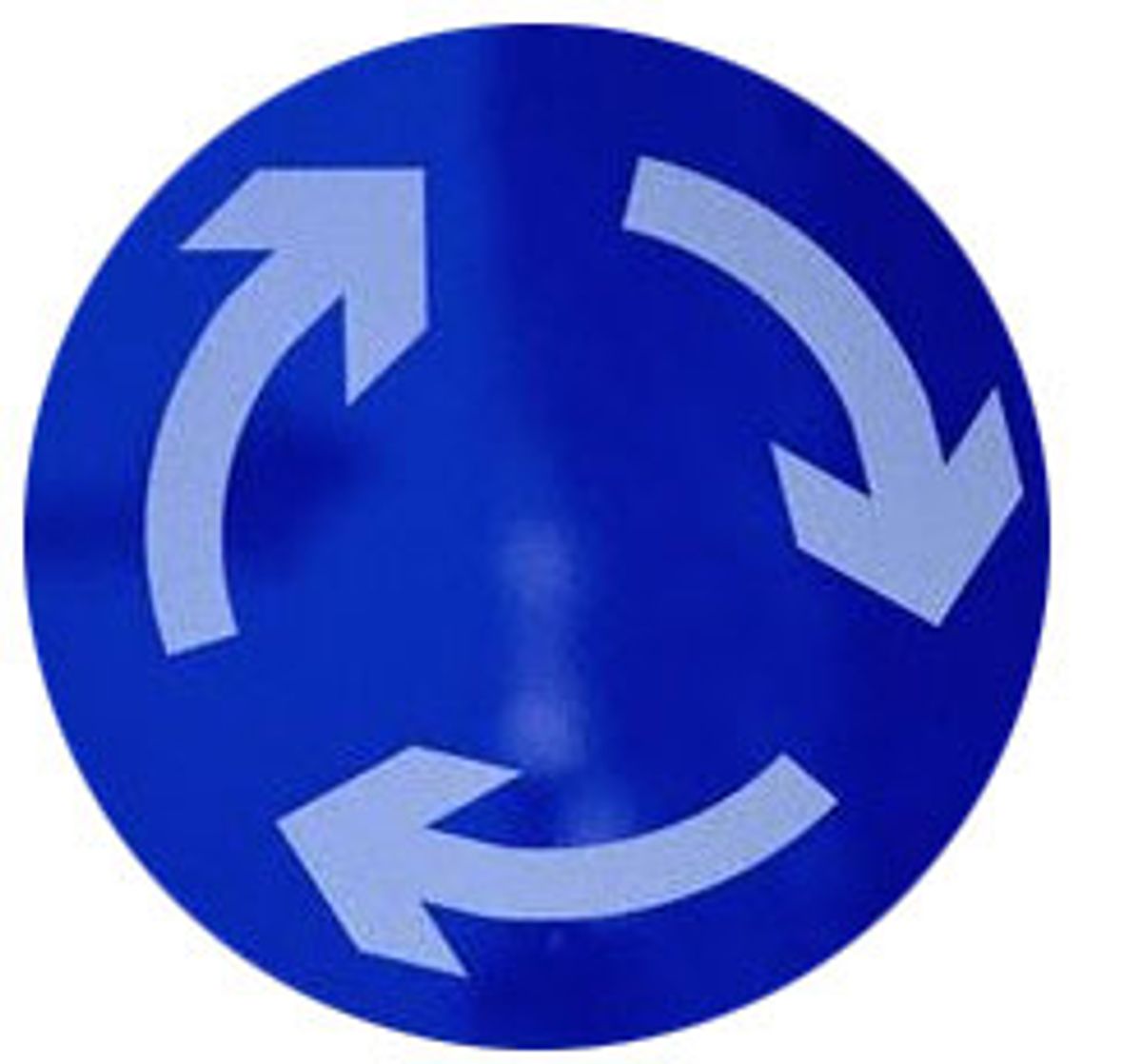 Even the words are the same. On Iraq, President Bush declared on Feb. 4, 2004, "We will do what it takes. We will not leave until the job is done." On post-Hurricane Katrina reconstruction, on Sept. 15, he eerily echoed, "We will do what it takes. We will stay as long as it takes." It was reassuring for the nation to be told by the president in his televised address that he intends to "stay" in the United States and not cut and run. Perhaps a White House speechwriter hit the copy-and-paste function on his computer or the word "stay" simply popped into the president's mind as he contemplated the crisis, straying into improvisation.

The jarring reverberation of repetitive rhetoric suggested a presidency on a feedback loop. Analogies, of course, are imperfect. Bush's speech, which junked the whole of conservative ideology and channeled the spirit of Lyndon Johnson, might be taken as evidence that his frequent trips to New Orleans have worked some voodoo on him. But there are enough elements in common between the catastrophes in Iraq and New Orleans to be able to grasp the underlying similarities in the Bush approach from Gulf to shining Gulf.

Just as the Iraq war was predicated on the distortion, falsification and suppression of intelligence, so was the administration's preparation for Katrina marked by the refusal to register information contrary to its prefabricated beliefs. Bush's censoring and dismissal of science on global warming helped lull him about the growing severity of hurricanes as a consequence. It was a possibility he did not want to know because it ran contrary to his dogmas. But his passivity extended to the eve of Katrina's landfall, when Max Mayfield, the director of the National Hurricane Center, briefed him by teleconference video about the likelihood that the raging storm would breach the levees of New Orleans. Under Bush, the Federal Emergency Management Agency had been reorganized from a professionally proficient operation into a political dumping ground, and since 2001 FEMA had been studiously ignoring precise warnings of a potentially disastrous hurricane hitting New Orleans.

Before the invasion of Iraq, Bush refused to listen to senior military commanders that the light force poised for attack would be insufficient to secure the country under occupation. Then Army Chief of Staff Eric Shinseki's Senate testimony on the dangers of the Bush planning earned him a publicly humiliating rebuke from then Deputy Secretary of Defense Paul Wolfowitz (since rewarded by elevation to the presidency of the World Bank). Wolfowitz, a prominent neoconservative who had been advocating an invasion of Iraq from the earliest days of the administration, before Sept. 11, and who entertained theories that Saddam Hussein might have been behind the bombing of the World Trade Center in 1993 and the Oklahoma City bombing in 1995, was acting as a point man for Bush in denying difficulty. Wolfowitz, along with the president, the vice president and the secretary of defense, subscribed to the notion that the invasion would be a "cakewalk," a smiley face of a word affixed by Wolfowitz friend and fellow neoconservative Ken Adelman. Dick Cheney waxed rhapsodic about the flowers that would be strewn in the path of our soldiers.

Similarly, Bush, still on his monthlong vacation in August, during which he devoted press availabilities to explaining why he would not meet with Gold Star Families for Peace mother Cindy Sheehan ("I think it's also important for me to go on with my life, to keep a balanced life"), greeted Katrina as a cakewalk. "When that storm came through at first, people said, Whew. There was a sense of relaxation," he said. The record, however, reveals Gov. Kathleen Blanco of Louisiana frantically and unsuccessfully attempting to reach him or his chief of staff, and the levees being breached before Katrina's eye passed over New Orleans. Four days afterward, Bush's staff considered him so ill-informed on the basic facts that they prepared a video of network news reports for him to watch as Air Force One carried him back to Washington.

Going in light with the military in Iraq was replicated in New Orleans -- to similar effect. "Stuff happens," remarked Donald Rumsfeld in response to the looting of Iraqi government ministries and the Iraqi National Museum. From the electric grid to oil pipelines, the infrastructure was trashed. In New Orleans, the National Guard was belatedly sent into the looted city, where the infrastructure had been wrecked by the storm. Unlike the Iraqi army, which was disbanded, the New Orleans Police Department was overstressed and undermanned. Lt. Gen. Steven Blum, the top commander of the National Guard, told USA Today, "We were underequipped. We don't need tanks and attack helicopters and artillery, but we must have state-of-the-art radios and communications." The equipment needed was deployed in Iraq and the administration had not planned for its use in natural disasters at home.

Amid the ruins, Gen. Jay Garner was appointed the first head of the Coalition Provisional Authority in Iraq. From the start the Pentagon curbed his authority while raising expectations of instant results in conformity with its scenario of liberation. When Garner was incapable of producing the desired pictures, he became the fall guy. Garner was poorly prepared for his mission, but he was not a thorough incompetent like recently resigned FEMA director Michael Brown. While Bush defended "Brownie" as doing "a heck of a job," Garner was undercut. But both became scapegoats for the misfeasance of higher-ups -- in Garner's case, the Pentagon, and in Brown's his superior, Secretary of Homeland Security Michael Chertoff. Throwing Garner and Brown overboard were attempts to foster impressions that they alone were responsible for the failures of policy.

Onto these fresh post-invasion, post-hurricane scenes of wreckage, the president swooped down dressed in appropriate costumes. He alighted on the deck of the USS Abraham Lincoln in May 2003 attired as a fighter pilot while a banner arranged by the White House advance team gleamed behind him: "Mission Accomplished." That Thanksgiving, wearing an Army jacket, a jovial president turned up at a mess hall in Baghdad, hoisting a large turkey with all the trimmings for the troops. Only later was it reported that the turkey was a decoration. In New Orleans' Jackson Square to deliver his major speech, Bush appeared in an open-collared shirt, sleeves rolled up, as the man of the people ready for work. The square was brilliantly lit for his speech, but when he left the electricity was turned off and the deserted city plunged again into darkness.

In 1787, Prince Grigori Potemkin, the chief minister of Catherine the Great of Russia, supposedly built façades of prosperous towns in the Crimea to impress her with his management. Historians now regard this story as apocryphal. But Bush's Potemkin villages are not legends. To the extent that he believes they represent his actual surroundings, his faith-based system of belief triumphs over the reality based, and the president who poses in Potemkin villages has become the Potemkin villager.

Behind the high-flown rhetoric of "freedom on the march," the Coalition Provisional Authority imposed conservative nostrums such as the flat tax and broke Iraqi labor unions. The CPA also served as a political clubhouse for right-wingers. It called upon the Heritage Foundation as a resource for youthful (and inexperienced) applicants. Now, the Iraqi government has issued an arrest warrant for its former defense minister for stealing $1 billion, and an additional $8 billion is said to be missing. On HBO's Bill Maher show last week, the comedian interviewed Dan Senor, the former CPA press secretary, and asked him where the money went. "We didn't have first-world accounting standards when we distributed that money," Senor explained. He did not mention who exactly was in charge of the finances: Michael Fleischer, the brother of Ari Fleischer, Bush's former press secretary.

Like former CPA chief L. Paul Bremer, Karl Rove, Bush's senior political advisor and deputy chief of staff, who has been appointed as head of the hurricane reconstruction effort, has drawn on the Heritage Foundation for ideas. The conservative think tank's hastily slapped-together policy compendium for the occasion, "From Tragedy to Triumph," has become one of Rove's playbooks. Under the cover of Bush's sudden acknowledgment in Jackson Square that "poverty has roots in a history of racial discrimination" and a sweeping promise to "rise above the legacy of inequality," the administration has promulgated a series of reactionary acts, from suspending affirmative action in granting contracts to cutting prevailing wages for construction to proposing to use federal funds for vouchers to enable Katrina evacuees to reenroll in parochial and private schools.

Rove's appointment as reconstruction czar puts him in charge of distributing federal largess. The budget for reconstruction is estimated to run at about $1 billion a day, for a total of at least $200 billion. With that treasure chest, Rove directs a gigantic K Street project, combining lobbyists and the administration. Already, firms with intimate ties to the Republican Party, such as Halliburton and Bechtel, are major beneficiaries, as they have been in Iraq. And Joe Allbaugh, the former FEMA director, Bush's chief of staff as governor of Texas and his 2000 campaign manager, acts as the middle man in the Gulf states.

With every speech, appearance and policy announcing his good intentions, Bush accelerates the law of diminishing returns. After his speech in Jackson Square, support for his reconstruction efforts fell by 4 percent. Every promise of a new government program angers his right; every hollow pledge alienates everyone else. The incredible shrinking domestic president can find no safety in reassuming his outfit as the "war president." Less than one-third of the American public now supports his policy in Iraq, according to a CNN/Gallup poll. The poll also reports that Americans have become bitterly pessimistic, with 54 percent saying they believe the United States "won't win."

In response, the Pentagon publicizes body counts of insurgents killed, the metric from the Vietnam War that Rumsfeld once said he would never use. Meanwhile, the Government Accountability Office reports that since the beginning of the cakewalk the U.S. military has used 1.8 billion rounds of small-caliber ammunition.

None of these reality-based measurements discourages Rove, "the architect" of stretches of Potemkin villages. Last week, he attended a private conference of high rollers in Aspen, Colo., where he reportedly dismissed Bush's current standing as a problem of communication. "We have not been good at explaining the success in Iraq. Polls go up and down and don't mean anything," he was quoted as saying on the Huffington Post. On the hurricane, while Bush was accepting "responsibility," Rove was conceding no error: "The only mistake we made with Katrina was not overriding the local government." And on public disillusionment with the Iraq war, he said: "Cindy Sheehan is a clown. There is no real antiwar movement. No serious politician, with anything to do with anything, would show his face at an antiwar rally."

Another minister of state perhaps best captured the state of mind reflected by Rove's comments. On the Bourbon kings, Talleyrand said, "They have learned nothing and forgotten nothing."