Get his robes ready 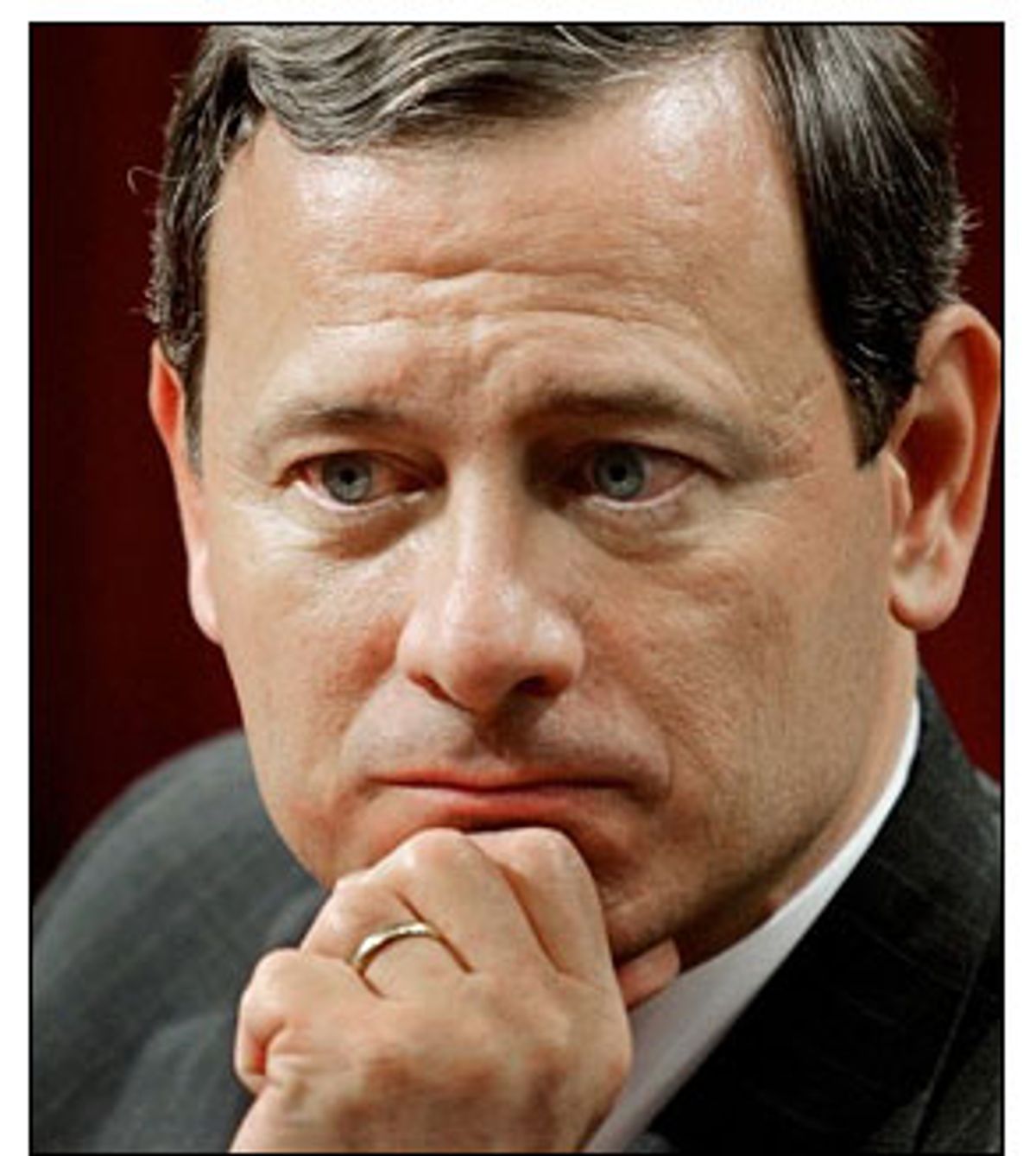 The leading generals in the fight to defeat the Supreme Court confirmation of John G. Roberts Jr. could not even get a seat in the room. As the Judiciary Committee gathered Thursday to vote their approval of Roberts, Ralph Neas, the head of People for the American Way, and Nan Aron, the head of the Alliance for Justice, stood in the back corner, crushed together with journalists and spectators like cigarettes in a new pack. Just an arm's length away, Roberts' supporters, including Leonard Leo of the conservative Federalist Society, sat comfortably in reserved seats.

"Not good," said Aron, after the ranking Democrat on the committee, Patrick Leahy, announced his support of Roberts. "Ask the woman in black and white. She is doing a lot better." Aron nodded in the direction of Andrea Lafferty, the executive director of the Traditional Values Coalition, who has made a career fighting against the rights of homosexuals to marry. Lafferty, wearing a zebra-inspired blouse, did appear ebullient.

The joy was warranted. About two months after President Bush chose Roberts for the Supreme Court, his nominee is now assured a spot at the top of the highest court in the land. All the talk of a historic showdown over the president's pick has disappeared. Three Democrats -- Leahy and Sens. Herb Kohl and Russ Feingold of Wisconsin -- joined all 10 committee Republicans in recommending Roberts to the full Senate. His approval by the full Senate is assured. Even the Democrats began speaking of Roberts as if he were already on the bench.

"I take him at his word that he does not have an ideological agenda," Leahy said of Roberts. But he also voiced some doubts: "The Senate will vote next week. Only later will we find out if Judge Roberts will be the kind of justice he says he will be."

Like the Democrats, some Republicans confessed that they knew little of Roberts. "Hopefully I won't come back in 10 years and say I was wrong," said Sen. Charles Grassley, R-Iowa, who added that he now regretted his vote to approve David Souter, a Republican nominee in 1991. "You have to trust your judgment. Sometimes that judgment is going to be wrong."

The Democrats, meanwhile, continued to complain about the unknown. "We are left with guesswork, impressions, hunches," said Sen. Charles Schumer, D-N.Y. Sen. Dianne Feinstein, D-Calif., added: "I knew as little about what Roberts really thought after the hearings as I did before the hearings."

It was an uninspiring end to a suspense-free hearing. Roberts, a brilliant legal mind with a near-spotless record, played his role perfectly, politely sidestepping tough questions while showering the senators with his legal knowledge. With so little suspense, committee members found themselves Thursday wandering down rhetorical flights of fancy.

"Prostitution isn't a good business endeavor," Sen. Lindsay Graham, R-S.C., observed at one point, suggesting that he would ban it as a politician. He was trying to make a point about the difference between the authority of politicians and judges, though he seemed suddenly distracted. "Those women," he added, "live in hell."

Not to be outdone, Sen. Sam Brownback. R-Kan., brought in Abby Loy, a pretty 14-year-old girl with Down syndrome, who wore a blue flower made of ribbon on her dress. For a few moments at the hearing, she stood behind Brownback's chair, a prop in his continuing effort to outlaw abortion. "We want to celebrate her," Brownback said, by which he meant that he was happy she had not been aborted. Last week, Brownback used time during the questioning of Roberts to talk about "Jimmy," a man with Down syndrome who runs one of the Senate elevators.

"I would just ask you, Judge Roberts, to consider -- and probably you can't answer here today -- whether the individuals with disabilities have the same constitutional rights that you and I share while they're in the womb," Brownback asked at the time. Roberts, of course, offered no direct answer. With this in mind, Brownback used his time Thursday to plead for a new nominee who did not equivocate on opposing abortion. "This process is not producing the results I think any of us would like," Brownback said.

Feingold and Leahy made a point to also send warnings to President Bush about his next nominee, which may be announced as soon as next week. Feingold suggested point-blank that he could not support Janice Roberts Brown, an African-American woman on the U.S. Court of Appeals for the District of Columbia, because of the ideology revealed in her statements, which include likening the New Deal to a "socialist revolution." Leahy made it clear that he had not been happy with the president's handling of Roberts. "I hope this time the president will follow through, share with us his intentions and even seek our advice," he said.

After the vote, supporters and opponents filled the hallway outside the hearing room to spin the media. Lafferty was all smiles as she handed out a press release, displaying the conservative knack for demonizing Democrats even when the two sides are in agreement. The release called Leahy's vote to confirm Roberts "cynical posturing" that would lead to a "vitriolic attack against the next Bush nominee to the court." "What Leahy did today," she said, "it was merely setting the stage."

Nearby, Nina Totenberg, the legal reporter for National Public Radio, cornered the chief of staff of Sen. Arlen Specter, R-Penn., who is chairman of the Judiciary Committee; Totenberg was lobbying to schedule the next round of Supreme Court hearings around her vacation plans, which she had scheduled to coincide with her wedding anniversary. Across the hall, Neas gathered together a clot of reporters to vent some of his frustration at Feingold. "I am especially disappointed in him," he said.

By contrast, Nan Aron appeared to have recovered somewhat from the doldrums of the hearing room. At least the process was over, the battle finally lost. "It's on to the next," she said.