More puzzling than the plot of this post-"Sixth Sense" supernatural thriller is what's wrong with Ewan McGregor's pants. 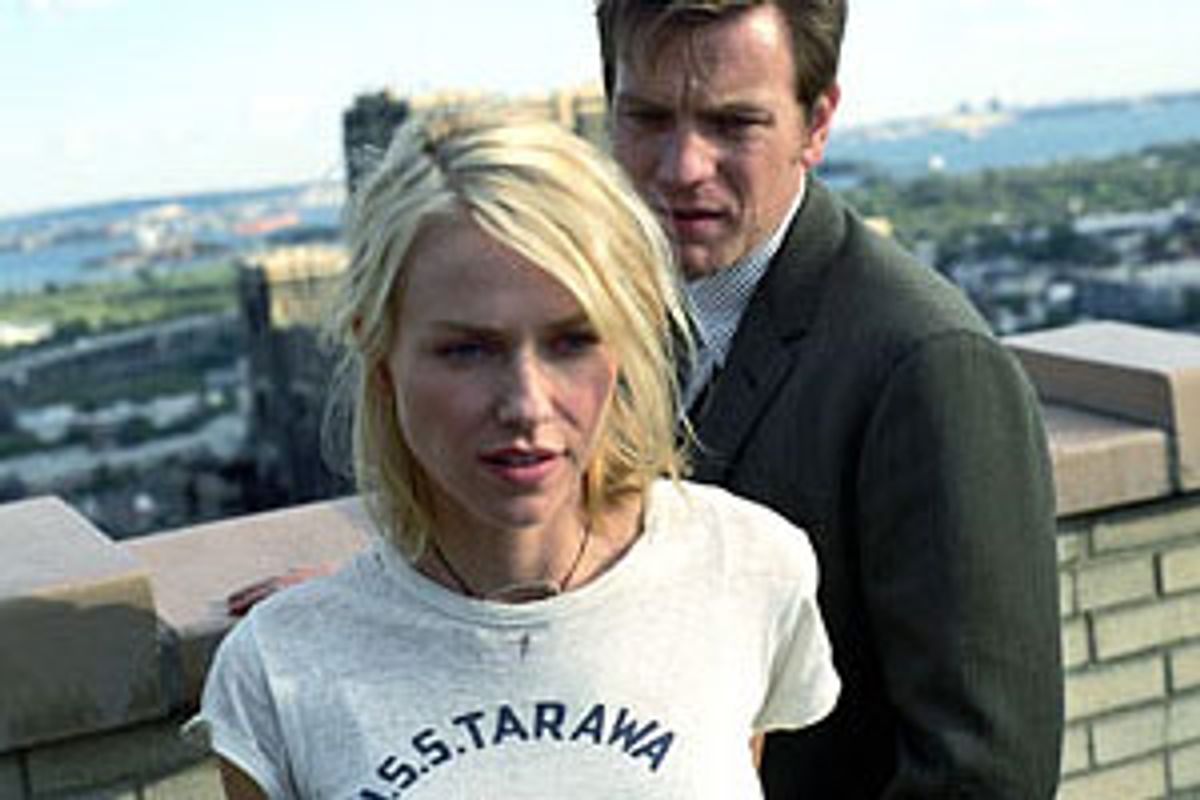 You can tell right away that something is not right about Sam Foster, the New York shrink played by Ewan McGregor in "Stay." The thing that isn't quite right is his wardrobe. Sam's look, if you want to dignify it with that word, involves sweaters at least a size too small, floodwater trousers and oxfords or brogues worn without socks. He looks like he knocked over the supply truck for a parochial school, or like he's a dead person whose togs got switched at the morgue. Damn it, I forgot -- I wasn't supposed to give away this movie's secret.

I'm kidding, really. Neither of those is it. In fact, "Stay," the new film from director Marc Forster ("Monster's Ball") and screenwriter David Benioff ("25th Hour"), adopts a brave new tack among post-"Sixth Sense" supernatural thrillers. That new tack is to tell you what's really going on in the very first scene, and then spend the rest of the movie dazzling you with quasi-mystical mumbo jumbo anyway. Pure genius.

Throw in Naomi Watts as Sam's girlfriend, Ryan Gosling as the sullen kid he's trying to save from suicide, and supporting parts for Bob Hoskins, B.D. Wong and Janeane Garofalo, and a lot of talent gets expended in "Stay." (I'm not including whoever dressed McGregor.) Too bad the movie they made, while effective in short spurts, is almost a complete waste of time.

If you're watching "Stay" on cable sometime in 2006, go out for a Big Gulp and some nachos in the middle -- around the time the dead dog reappears and Mom starts bleeding from a mysterious head wound -- and make it back for the last five minutes, when you get to see the Brooklyn Bridge through a visual effect that looks like sheets of ectoplasm. That's really cool!

Plus, you won't have to sit through all those scenes in which McGregor tries to delivuh summa dat gen-yoo-wine Noo Yawk tawk he learned from his dialect coach. Did they hire the costume designer to do that, too? The funny part is that Gosling talks the same way; I guess they figured if it was good enough for Brando in "On the Waterfront," it's good enough for a Scotsman and a Canadian.

Here's the deal: If you're a member of the spoiler police, and don't want to know the first thing about how this lame movie is set up, leave now and go read Heather Havrilesky. She's generally funnier than me anyway. If you're still here, OK then: Just about the first thing in "Stay" is a point-of-view shot from inside a car during a devastating rollover accident on the Brooklyn Bridge. Then we see Sam wake up in bed at home, apparently from a bad dream, troubled by a crying baby (their neighbors have no baby) and experiencing weird little hallucinations.

By the time Sam is cycling across that very same bridge in his really short, really tight pants, Forster and cinematographer Roberto Schaefer have established their mode of permanent disorientation: The straight lines go all bendy, perspective is oddly foreshortened, the camera lists from side to side and then sinks, like someone passing out. This is not a movie for those prone to barfing.

Sam has inherited a suicidal patient named Henry (Gosling) from a fellow shrink (Garofalo) who has herself gone 'round the bend. Henry can predict the weather, cause time to go in little loops so Sam experiences the same events over and over, and give sight to a blind shrink (Hoskins) who looks an awful lot like his father. There are a few murky, interesting scenes that don't really go anywhere -- Hoskins retells an ominous dream from one of Freud's case histories -- but since we've already figured out that none of this is really happening, dude, then who the hell cares?

If the central question in "Stay" is who exactly is experiencing all these weird visions (aka, the movie) while kicking the bucket amid sheets of ectoplasm on the Brooklyn Bridge, that too is obvious from the very beginning. Forster and Benioff are able craftsmen who apparently thought it might be interesting to seal themselves into a narrative box with no way out. Sorry about that, guys -- I hope it was a growth experience.

"Stay" is far from unwatchable, and for the first 45 minutes or so isn't actively dull. I kept wondering if every shift of scenery, every new character, might give it a kick in the ass. Despite an adequate special-effects budget it never happens. There's one terrific late scene in which a diner waitress named Athena (Elizabeth Reaser), on whom Henry has a crush, reads a scene from "Hamlet," as Hamlet, for no apparent reason. Then it's over, and you realize how much more fun you'd be having at a lesbian alt-theater Shakespeare production than at this movie.