A prisoner of the neocons, the president hunkers down, awaiting the outcome of the Libby indictment. 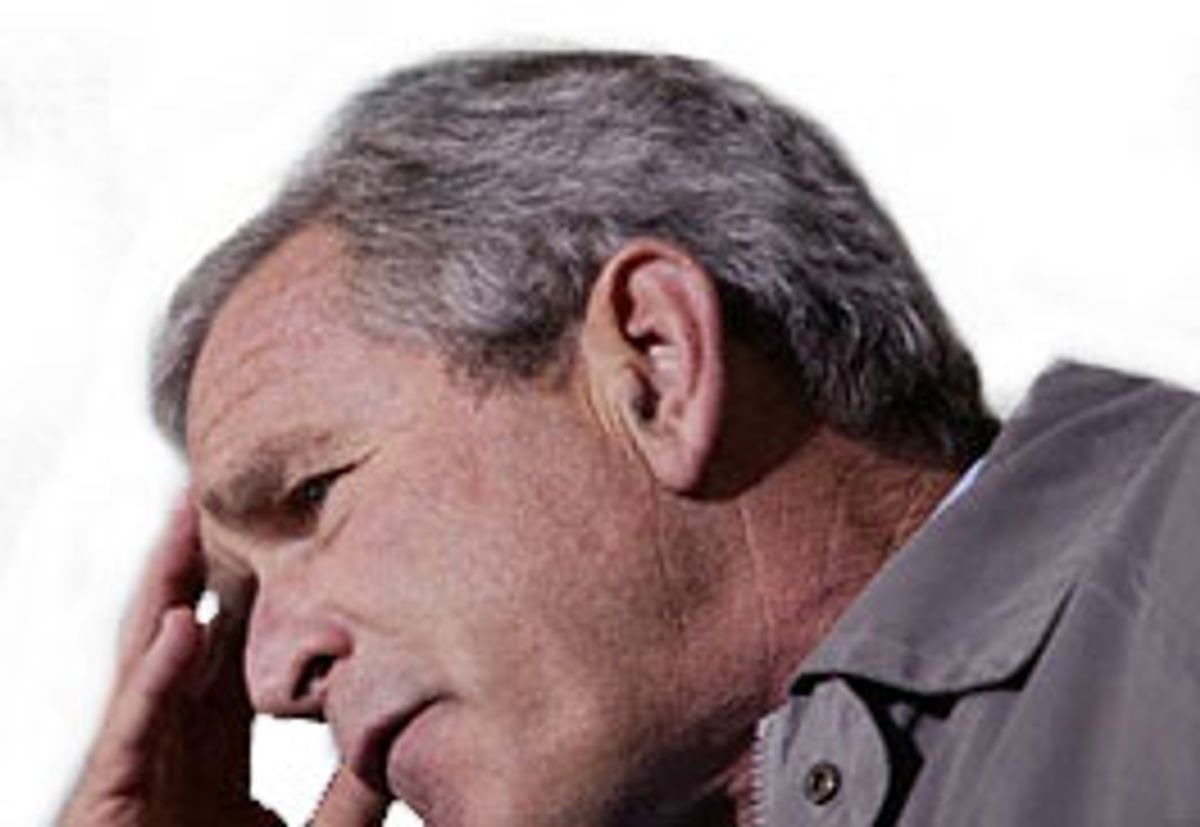 One year after his reelection President Bush governs from a bunker. "We go forward with complete confidence," he proclaimed in his second inaugural address. He urged "our youngest citizens" to see the future "in the determined faces of our soldiers" and to choose between "evil" and "courage." But as he listened to Bush that day, Vice President Dick Cheney knew that the election had been secured by a coverup.

"I would have wished nothing better," declared Patrick Fitzgerald in his press conference of Oct. 28, announcing the indictment on five counts of perjury and obstruction of justice of I. Lewis "Scooter" Libby, the vice president's chief of staff, "that, when the subpoenas were issued in August 2004, witnesses testified then, and we would have been here in October 2004 instead of October 2005. No one would have went to jail."

The indictment of Libby documents that it was Cheney who confirmed the exact identity of covert CIA operative Valerie Plame to him. The indictment also describes a figure called "Official A," subsequently disclosed to be Karl Rove, the president's chief political advisor, who informed Libby that he had told conservative columnist Robert Novak of Plame's secret status. The next day, July 12, 2003, Libby conferred with Cheney on how to handle the press on the matter. That same day, Libby revealed Plame's identity to two reporters, Judith Miller of the New York Times and Matthew Cooper of Time magazine. Then Libby falsely testified that he had learned Plame's name from reporters. On Sept. 30, 2003, President Bush emphatically stated that he wanted anyone in his administration with information about the Plame leak to "come forward"; if anyone inside was involved, he wanted to know; and if anyone had violated the law, "the person will be taken care of." On June 10, 2004, he pledged that anyone on his staff who had leaked Plame's name would be fired.

When the Libby indictment was announced, Bush and Cheney praised him as a fine public servant. Still under investigation, Rove remains in the West Wing. But Cheney knew during the presidential campaign that he had discussed with Libby how to deal with Plame. Now Bush knows that Rove had enabled Novak to publish her identity. But the president's promise to fire officials is suddenly inoperative. It is apparently acceptable for aides to deceive the president and compromise national security so long as they further his short-term political benefit. Ever-shifting ends justify ever-shifting means.

Libby's alleged coverup was undertaken in the spirit of neoconservative Leninism. The vanguard, which sets all policy and uses the party as its instrument, rationalizes any tactic. Libby was a deeply seeded neoconservative apparatchik, possessing long experience and great bureaucratic skill, an inside man, never seeking the spotlight for himself. He was a member of a small cadre of his caliber, not easily replenished. If he had testified truthfully in October 2004 the result would have consumed the final days of the campaign. His Leninist logic permitted him to protect the Republican cause, but he has tainted Bush's victory in history as surely as the Supreme Court decision in Bush v. Gore did in 2000.

Bush took his 2004 win as a resounding mandate for a right-wing agenda. His second term was to be the fulfillment of conservative dreams to roll back decades of liberalism. With each right turn, however, his popularity declined. Iraq acted as an accelerator of his fall.

His nomination of his White House legal counsel Harriet Miers for the Supreme Court was an acknowledgment of his sharply narrowed political space. Bush believed he could thread the needle with her because her record was unknown. While the Republican masses supported him, the Leninist right staged a revolt. In Bush's cronyism and opportunism, they saw his deviation. He was the disloyalist. With the prosecutor's indictment imminent, Bush withdrew Miers and caved. Broadly unpopular, he could not suffer a split right. His new nominee, federal Judge Samuel Alito, a reliable sectarian, is a tribute to his bunker strategy.

Hostage to his failed fortune, Bush is a prisoner of the right. His administration has become its own little republic of fear. Libby's public trial will reveal the administration's political methods. Cheney, along with a host of others, will be called to testify. Whatever other calamities may befall Bush, their specter harries him to the right. "Disunity, dissolution and vacillation" are hallmarks of "the path of conciliation," as Lenin wrote in "What Is to Be Done." The vanguard on "the path of struggle," criticized for being "an exclusive group," must oppose any retreat proposed by the "opportunist rearguard." "We are marching in a compact group along a precipitous and difficult path, firmly holding each other by the hand. We are surrounded on all sides by enemies, and we have to advance almost constantly under their fire."