Even if the vice president himself is not indicted, imagine the questions he might be asked, under oath, in Libby's case. 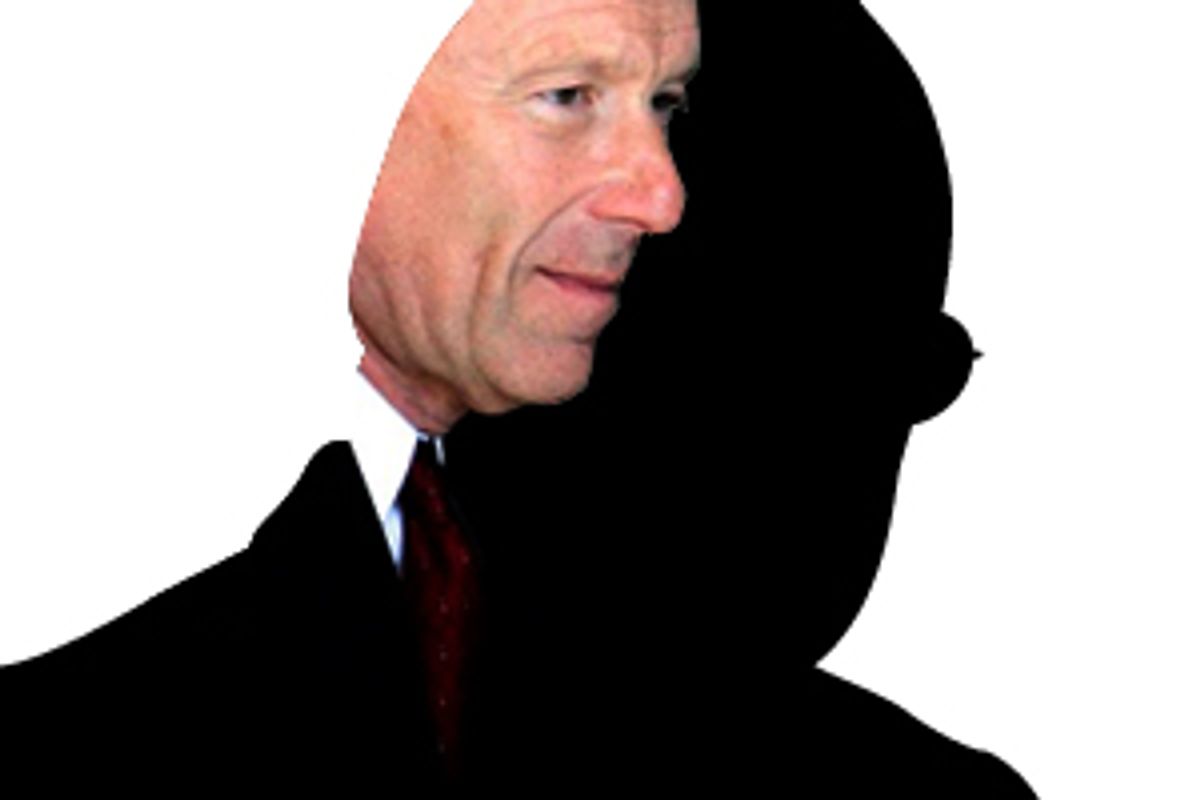 The trial of Scooter Libby will also be the trial of Dick Cheney. Throughout his long public career in four Republican administrations, starting as an aide in the Nixon White House, Cheney has operated in the background and through back channels. But eventually the vice president will be called to the stand, perhaps as a witness for both the prosecution and the defense.

Cheney may request a sealed courtroom, ask for a redacted transcript of the proceedings or assert executive privilege. But established legal precedent argues against a claim of executive privilege. The only basis on which he could refuse to testify would be to take the Fifth Amendment, protecting himself against self-incrimination. Of course, that would be political suicide because it would be perceived as a virtual admission of guilt. Indeed, Cheney has already waived that Fifth Amendment right, having submitted to an interview with special prosecutor Patrick Fitzgerald. And his testimony in the Libby trial opens a perjury trap if he contradicts anything he has previously said to the prosecutor.

In the trial, the prosecutor will attempt to penetrate Libby's coverup, his obstruction of justice, which Fitzgerald has analogized to throwing dirt in the eyes of an umpire. He will call a slew of White House aides, including a number of Cheney's, to break through Libby's bodyguard of lies. The truth about Cheney is to be found beyond the coverup.

Since his indictment on five counts of perjury and obstruction of justice, Libby the loyalist, Cheney's Cheney, has moved swiftly to disabuse anyone of the notion that he will fall on his sword. The surest way for him to protect Cheney would have been to plead guilty to the charges, admit nothing and go directly to jail. But Libby passed up his chance to plead in negotiations with the prosecutor before the indictment. He has hired a team of lawyers from three different firms who are making preparations for an aggressive defense. He has also begun raising money for his legal defense from Republican Party donors whose names will be kept secret. To coordinate this fund and his public relations, he has hired Barbara Comstock, a longtime Republican Party operative and former communications director for Attorney General John Ashcroft.

Libby is not a man in a hurry. His first legal maneuver was to waive his rights under the Speedy Trial Act, which requires a trial within 120 days. The presiding federal judge, Reggie Walton of the U.S. District Court of the District of Columbia, has not scheduled a status hearing until February 2006. This interregnum means that the trial might not take place until the spring or even the fall, rising to a rolling boil close to the midterm elections and even beyond.

From the beginning, the White House has acted as though the Plame affair were a minor irritation that could be contained. Libby's elaborate stories to the grand jury of how he was told Valerie Plame Wilson's identity as a covert CIA operative by journalists suggested supreme confidence that the journalists would not disclose their conversations with him. But only Judith Miller acted to shield him as a "source"; she was sentenced to prison for 85 days before she agreed to testify. The others cited in the indictment, Matthew Cooper of Time magazine and Tim Russert of NBC News, had earlier undercut Libby's various accounts.

President Bush's insistence that he wanted to get to the bottom of the incident and that he would fire anyone involved in the leak was followed by studied inactivity. When the prosecutor revealed Libby and Rove as culpable for the leak, Bush made no gesture to fulfill his pledge. The Libby indictment, moreover, states that Libby learned of Plame's job from Cheney, though Cheney had publicly denied any knowledge or involvement. Yet Bush has taken no action and made no statement about his vice president's alleged deception.

Fitzgerald declared in his Oct. 28 press conference announcing the Libby indictment that he was "not done." Regardless of whether there are future indictments of Bush administration officials, the Libby trial itself will be a spectacle subjecting Republican candidates to vulnerability during the campaign season. A new poll by the Pew Research Center for the People and the Press shows that 79 percent believe that Libby's indictment is a matter of national importance. Cheney's legal exposure is also the Republicans' political exposure.

The prosecutor's cross-examination of Cheney need not be limited to the bits of information about him that are sprinkled in the Libby indictment. Cheney cannot expect that he knows what the prosecutor has learned. He cannot, therefore, fully anticipate what he will be asked. He might be presented with surprises that test his veracity and challenge his poise. Fitzgerald may also have testimony that contradicts what Cheney might say on the stand, and may not necessarily reveal it to him.

Certainly, Cheney should expect to answer a series of questions similar to these: Mr. Vice President, you shared with Mr. Libby the information that Valerie Plame was a CIA employee, didn't you? You believed that revealing Plame's supposed involvement in her husband Joseph Wilson's mission to Africa would discredit him, isn't that true? What was your reaction when you learned of Robert Novak's column divulging the identity of Valerie Plame? You spoke to people about Mr. Novak's column after it appeared, didn't you? Please name them and describe those conversations.

Did you know the identity of the two senior administration sources cited in his column after you read it? If not, what efforts did you make to determine the identities of these individuals? When White House press secretary Scott McClellan told the press corps in a briefing that neither Karl Rove nor Scooter Libby was involved in leaking Plame's identity, you knew that was false, but you never took any steps to inform McClellan or, more importantly, the president and the American people, did you?

What conversations did you have with Karl Rove or others on the White House staff about Joseph Wilson or Valerie Plame? You were present at meetings discussing Wilson's objections to the false Niger claims, weren't you? Did you discuss Plame with the president? What other critics of the administration did you ever discuss in meetings? Who else was present? Please tell us about those conversations. What conversations did you have about Valerie Plame or Joseph Wilson with the president?

Mr. Vice President, you knew from talking to Mr. Libby that he didn't obtain the information about Plame's identity from the press, didn't you? You knew Mr. Libby spoke with Tim Russert, Judith Miller and Matthew Cooper, isn't that true? And you knew that he provided information about Plame to them, not them to him, didn't you? You were his source, not them, isn't that true?

Mr. Vice President, you are under oath.