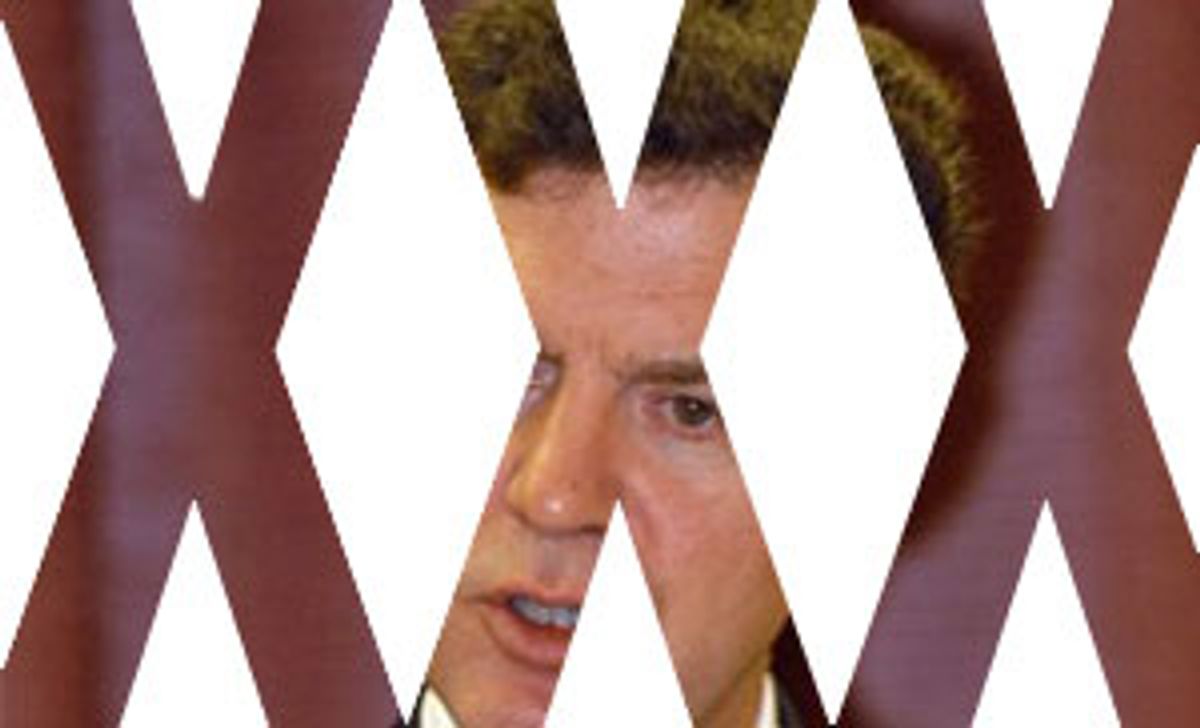 "I think most Americans agree and know that pornography is bad. They know that it involves exploitive images of men and women, and that it is morally repugnant and offensive," Brownback said, kicking off a hearing of the Senate's Subcommittee on the Constitution, Civil Rights and Property Rights, which he chairs. "What most Americans don't know is how harmful pornography is to its users and their families."

She went on to explain that the experience of masturbation activates about 14 neurotransmitters and hormones, causing a quick chain reaction of brain activity. "There have been some experts who have even argued that, in and of itself, overrides informed consent when encountering this material," she said, apparently suggesting that an adult's own sexual self-stimulation can lead to a loss of judgment. Pornography, she continued, had been shown to increase the risk of divorce, decrease marital intimacy and cause misunderstandings about the prevalence of less common sex practices like group sex, bestiality and sadomasochistic activity. Men are not the only victims. Women, she said, make up about 30 percent of the audience for online pornography.

At press time, the rate of pornographic viewership in Utah hotels could not be independently verified. But Utah was represented at the hearing. Sen. Orrin Hatch attended a portion of the hearing to voice his support for a clampdown on pornography. He compared explicit sexual material to high-fat food and secondhand smoke, saying this was a "problem of harm, not an issue of taste." "America is more sex-ridden than any country in world history," said Utah's senior senator, quoting a 25-year-old study. "Today, as we enter the holiday season, obtaining the catalog of certain clothing companies will require a photo I.D."

The only other senator to participate was Russ Feingold, D-Wis., who is a ranking member of the Constitution subcommittee. He told the panelists that he shared Brownback's concerns over pornography involving children and human sex trafficking. But he seemed more skeptical about the overall tone of the hearing.

"The subject of this hearing suggests that we may be faced with proposals that go well beyond what Congress can constitutionally undertake," Feingold said.

Finally, Brownback spoke of possibly expanding the law to ban certain types of pornography beyond the current obscenity statutes. But he was repeatedly cautioned by one of the witnesses, Rodney Smolla, the dean of the University of Richmond School of Law, who said that any such effort would likely be shot down by the courts. The Supreme Court, Smolla explained, has been very clear that pornography is entitled to First Amendment protections, unless it is declared obscene.

Under this standard, Smolla pointed out, much of the mainstream pornography currently sold in video stores or distributed over cable or the Internet is likely obscene in many communities. The problem was not the law, he said, just the enforcement. "If you double or triple, or multiply tenfold, the prosecutorial efforts, you would see results, no doubt about it," Smolla said. "The law doesn't need changing so much as the social will to go after it."

In his decision, Judge Gary Lancaster cited a recent Supreme Court decision, in Lawrence v. Texas, that claimed a Texas ban on consensual sodomy violated the constitutional rights of adults. Lancaster ruled that the same legal reasoning all but nullified the rationale behind many obscenity laws. "After Lawrence," the judge wrote, "the government can no longer rely on the advancement of a moral code, i.e., preventing consenting adults from entertaining lewd and lascivious thoughts, as a legitimate, let alone compelling, state interest."

That ruling, if it is upheld on appeal, could be a death knell to the principal legal remedy pornography opponents now have. In the meantime, however, the Justice Department continues to win obscenity convictions. Just a few weeks ago, Edward Wedelstedt, the millionaire owner of a chain of adult video stores, pled guilty to distributing a video later deemed obscene in Texas, "Tits & Ass #8."

At the hearing, Brownback nonetheless pressed his witnesses to find ways to expand the legal regulation of whole categories of pornography. He asked the panel's legal experts if the courts might be moved to whittle away at First Amendment rights in the face of a public health crisis. "Are we getting to the point of evidence where a court would be willing to say this is enormously harmful?" Brownback asked.

"My simple answer is no," said Smolla.