The greening of Italia Federici

To buy influence at the White House, GOP operative Jack Abramoff gave $500,000 in tribal loot to a Gale Norton pal who heads an "environmental" nonprofit. 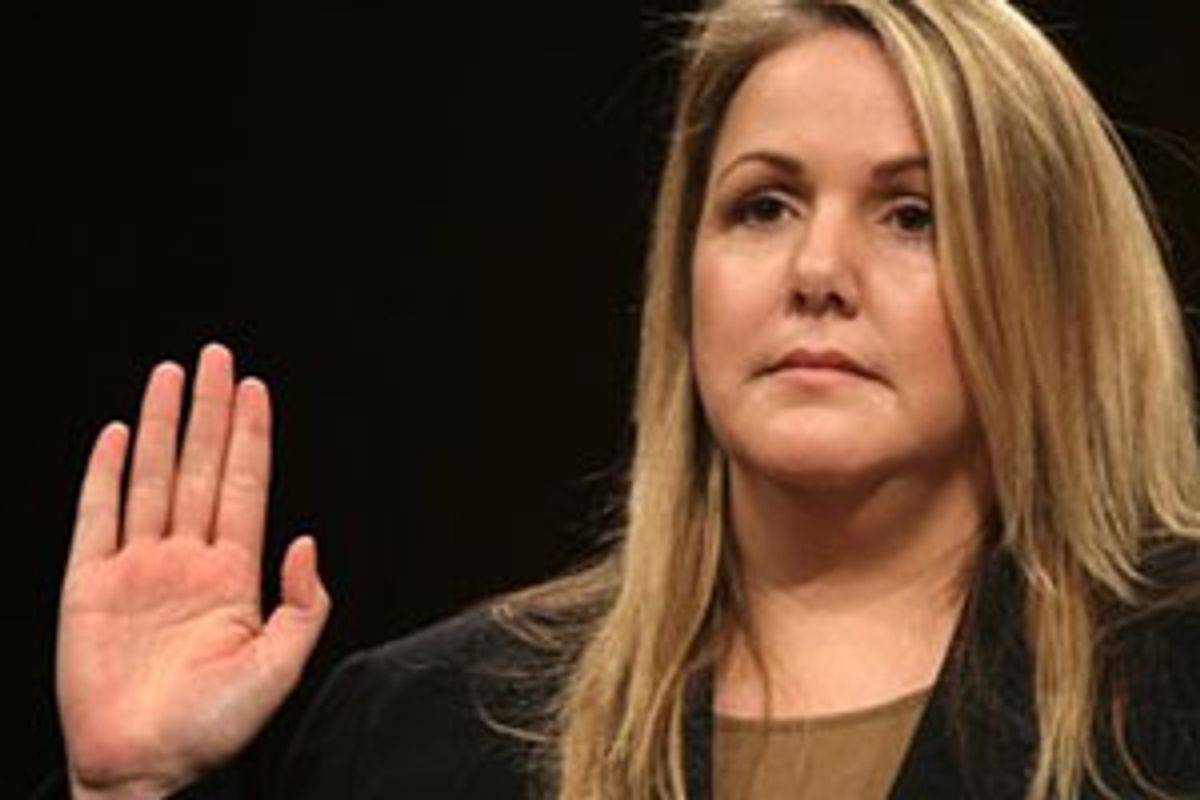 Italia Federici is a minor Republican player in Washington, the sort of dime-a-dozen functionary who can build a career trading favors in backrooms and producing political campaigns for moneyed interests. Her specialty is the environment. She leads a conservative front group called the Council of Republicans for Environmental Advocacy, or CREA, a tiny outfit, originally founded by Interior Secretary Gale Norton, that argues it is healthy for forests to clear-cut trees, good for the air to weaken air-quality controls, and "environmentally responsible" to drill for oil in the Alaskan wilderness.

For the past five years, Federici has limited her public activities to supporting President Bush's environmental plans. She claims that traditional environmentalists, groups like the Sierra Club and Democrats like Sen. John Kerry, D-Mass., are dishonest and deceptive. But that is just the public face of Federici. In private, she has played a very different role in Washington, one that has now put her in the middle of one of the largest political ethics scandals in a decade.

On Thursday, she appeared before the Senate Indian Affairs Committee to explain under oath her relationship with Jack Abramoff, the disgraced Republican lobbyist whose exploits have already led to a handful of criminal indictments. For critics of Republican politics, the Abramoff investigations are a gift that keeps on giving. They reveal a world of ethical violations, illegal money transfers, perjury and graft that flowed between some of the biggest names in Republican politics. Already, Abramoff has been charged with fraud; a top White House official, David Safavian, has been charged with perjury; and another former White House official, Timothy Flanigan, has withdrawn from a Senate confirmation process.

Abramoff's dealings have thrown ethical clouds over a number of Republican heavyweights, including Rep. Tom DeLay, R-Texas., evangelical activist Ralph Reed, and anti-tax crusader Grover Norquist. And the investigation is far from over.

Under the direction of Sen. John McCain, R-Ariz., the committee has uncovered evidence that suggests Federici entered into an unspoken deal with Abramoff, who is accused of stealing millions of dollars from his Native American clients. He funneled nearly $500,000 in donations from these clients to her environmental organization. In exchange, Federici became his advocate in the inner sanctum of the Bush administration, offering him access to at least two of her close friends, Norton and Deputy Secretary J. Steven Griles. "Ms. Federici would help get inside information about and possibly influence tribal issues within the Interior," explained Sen. McCain, at the start of the hearing.

For her part, Federici flatly denied all allegations that she had done anything untoward. "We provided excellent environmental advocacy consistent with our mission," she said of her work with CREA, which is registered as a nonprofit. "I get a lot of unsolicited e-mail, and I am helpful to all of my friends."

Sitting before the Senate panel, Federici had the bearing of a quiet, sympathetic elementary school teacher. She wore her blond hair loose over her shoulders, and spoke in soft tones. At one point she portrayed herself as an honest subordinate who had found herself working with unethical friends. "Jack was close to 50, a man and a high-dollar donor," she said of his blunt e-mails to her. "I did not feel comfortable correcting his vernacular." But she gave no ground to her inquisitors. She said, instead, that she believed the committee's staff had engaged in a smear campaign against her. She called McCain's investigation a "witch hunt," adding that she believed the senator might hold a grudge because she had opposed a bipartisan bill on air quality that McCain had sponsored.

McCain seemed to take pleasure in the suggestion that he was the one bending ethical rules. He focused instead on the evidence he had compiled. He described multiple e-mails in which Federici responded to Abramoff's requests for help lobbying Interior officials. In April of 2003, for example, Abramoff asked her to find out about a procedural change proposed by the department that had upset his clients. "Hi Jack: I will definitely see what I can find out," she wrote back, before immediately changing the topic. "I hate to bug you, but is there any news about a possible contribution...?"

"Any objective observer would see that there is a connection between contributions to your organization and the work that you would be doing on behalf of Mr. Abramoff," McCain said.

"I attached a second unrelated thought about an environmental project," Federici protested.

"Since your answers are so bizarre, I won't continue," said McCain a few minutes later. "I will let others make the judgment."

The e-mails released by the committee on Thursday certainly presented a damning case. At minimum, it appears Abramoff believed he was buying access to the Interior Department through Federici. He claimed to colleagues that Federici had "juice" at the agency. He claimed that CREA functioned as "Norton's main group outside the department." He offered Federici skybox seats at Redskins games and paid the bill for her meals and cocktail parties at his downtown restaurant, Signatures.

At the same time, Federici appeared to be catering to Abramoff's every wish. She arranged meetings, requested photo opportunities, delivered memos and newspaper articles to Interior officials. She even organized Georgetown dinner parties, under the cover of CREA, so Abramoff's clients could meet with Norton and Griles. "Thanks for all you do for my clients, the cause and me personally," Abramoff wrote her in a 2002 e-mail.

"When my friends reach out to me and ask me to help them with things, I never turn around and say why don't you just do it yourself," Federici said, adding that she paid for her own cellphone to facilitate this process. "I believed at the time that the reason Jack was giving us money is because he was a very generous Republican contributor," she said at another point in the hearing.

"That is unbelievable," said Sen. Byron Dorgan, D-N.D., who is co-chairman of the committee.

There was far less disagreement about what Federici had done with the tribal money she collected from Abramoff's clients. CREA spent it on initiatives that had nothing to do with the Native American tribes, but much to do with furthering President Bush's agenda. In April 2002, for example, CREA ran a $40,000 full-page ad in the Washington Post praising the environmental merits of the president's plan to drill in the Arctic National Wildlife Refuge.

"We are also going to do something mean to Senator John Kerry," Federici wrote Abramoff, a few days before the ad ran. She then described a video CREA had packaged that showed Sen. Kerry leaving an Earth Day celebration and stepping into a gas-guzzling sports utility vehicle. She sent the video to at least two television programs on the Fox News Network, "The O'Reilly Factor" and "Hannity and Colmes." "I am letting EVERYONE know that you are the only reason we have the funding to do this," she gushed to Abramoff in the same e-mail.

At the same time, e-mails show that Abramoff and Federici plotted to use environmental causes to help Abramoff's gambling clients. In December 2002, Abramoff proposed to Federici that she encourage the Interior Department to "say that they are not satisfied with the Environmental Impact Report" of a proposed casino in Michigan that would compete with one of Abramoff's clients. "This is a direct assault on our guys," Abramoff wrote to Federici. Eight minutes later, she wrote back to say she would contact Griles. "I will call him asap," she said. The casino was eventually approved, after a protracted delay.

Sen. Dorgan compared Federici's story to a fairy tale. "You know what bothers me?" Dorgan asked at the end of the hearing. "It's pretty clear that this is one of the most disgusting tales of greed and avarice, and perhaps fraud and stealing. It's unbelievable what we have uncovered here. It's almost sickening to see what we have uncovered. And you come to our table and say, 'Oh, gosh, this is just about friendships.'

"Somehow none of this adds up," he continued. "This committee, in my judgment, has had people testify, and, in my judgment, some of the testimony was fraudulent. We need to find out who, because there are consequences to that."

Dorgan may well have his way. The Senate Finance Committee is beginning its own investigation into the use of nonprofits like CREA by lobbyists like Abramoff. The Justice Department is in the midst of a wide-ranging investigation of Abramoff's lobbying operation. Sen. McCain has suggested the Internal Revenue Service should mount its own investigation. And Dorgan said he will ask for another hearing of the Indian Affairs Committee.

No date has yet been set. But it is clear that Federici, a backroom player in big-money politics, will not have the last word.