New Tory leader David Cameron is imitating Bush's campaign -- even claiming to be a "compassionate conservative." 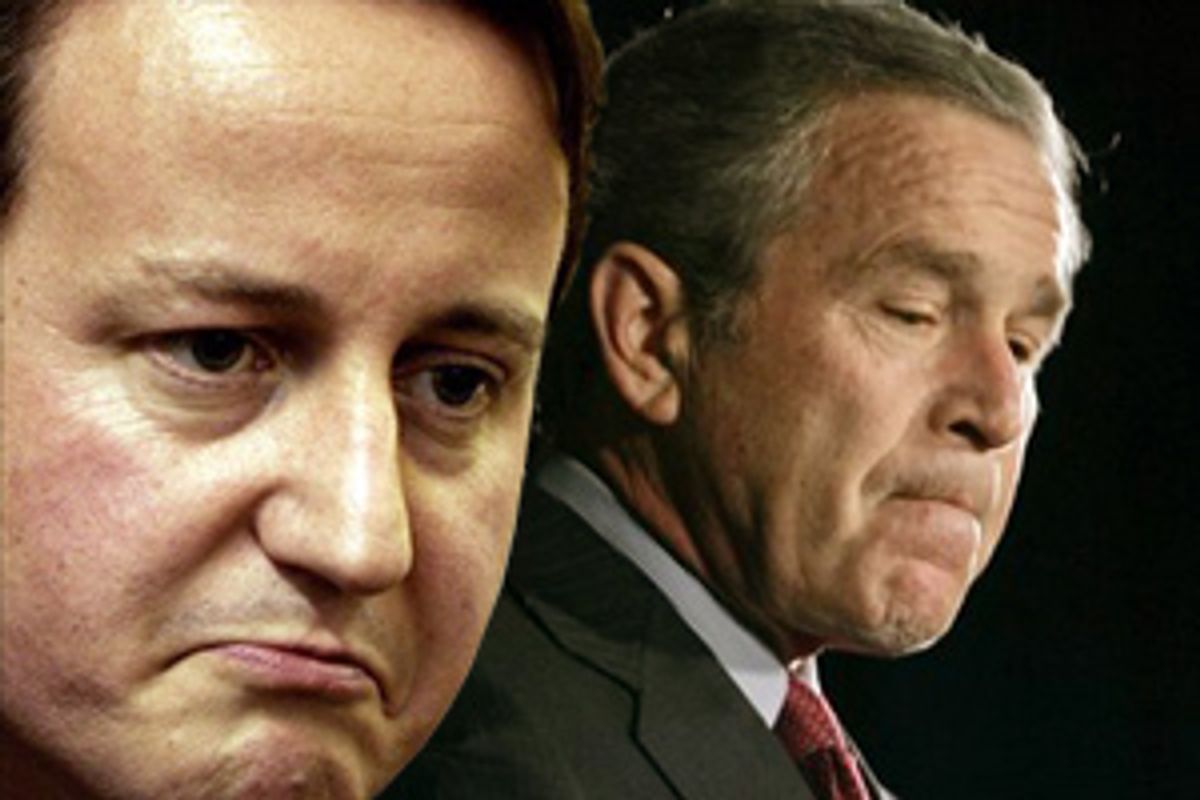 At the low point of his presidency, after a disastrous first year of his second term, his domestic programs out of favor and his foreign policy out of strategy, George W. Bush has at last attracted an imitator. David Cameron, 39, the new leader of Britain's Conservative Party, a fresh face without wear and tear, unabashedly claims to be the future. "You were the future once," he said to Prime Minister Tony Blair in his first appearance as Tory leader at "Prime Ministers Question Time" in the House of Commons Dec. 7.

The Tories elected the untested, youthful Cameron this month to head their party after two electoral defeats and three failed leaders. He is of aristocratic lineage, related by bloodline to the royal family, is Eton and Oxford educated, and represents one of the safest Tory districts in the country, Oxfordshire. At university he belonged to a private club of wealthy, well-born members known for hard drinking and "Lord of the Flies"-like behavior. Questioned about his past drug use, he responded that he had a "normal university experience" and that everyone is entitled to "err and stray" before maturity. He has a pregnant wife (also an aristocrat, related to King Charles II) and two children, one of whom has cerebral palsy.

In the Conservative Party conference speech this year that galvanized the Tories to make him leader, Cameron said he wanted young people to "feel good about being Conservatives again ... I want to switch on a whole new generation." He speaks of "social justice" and the need for the Conservatives to alter some of their policies. Cameron, who has been a member of Parliament for only four years, says he's "fed up with the Punch and Judy politics of Westminster."

Almost certainly, in a future election, he would go head-to-head against Gordon Brown, now chancellor of the Exchequer. Brown has compiled an impressive record in guiding the British economy. He and Blair have been locked into a long partnership as leaders of the Labor Party that is also a rivalry for primacy. Brown is a deeper intellect, a brooding Scotsman, and lacks Blair's natural optimism and ability at the quick tactical maneuver. Brown has more affinity with the Labor rank and file, often disagreeing with Blair even as he pledges to continue in Blair's path.

Cameron seems to embrace aspects of Blair's policies so as to present himself as a Blairite without the burdens of having been Blair, as a "reformer" without a past. His implied promise is to conserve Blair's achievements and continue some version of their logic, at the same time casting doubt on the commitment of Blair's rivals and critics within his party. Cameron decries partisan outbursts from the opposition bench, lifting himself above politics. He proclaims himself a contemporary, willing to accept change, compassionate, unafraid of surrounding himself with professional women. He is New Labor without Labor, just New. But the strategy is not new; it is adapted from the playbook of Bush's 2000 campaign.

Bush confronted a popular two-term Democratic president who had fended off Republican assaults and was credited with bringing peace and prosperity. Republican positions on domestic policy were almost uniformly unpopular. Bill Clinton's vice president, Al Gore, was his natural successor.

As governor of Texas, Bush turned his inexperience in national government into a virtue -- he was outside the fray and free of its rancor. The Republicans had shut down the federal government twice and impeached Clinton. Bush promised to "change the tone in Washington." He repeated endlessly that he was "a uniter, not a divider."

It was Bush who first assumed the mantle of "compassionate conservatism." He picked a fight with the draconian Republican House majority leader, Tom DeLay, who was against Clinton's program of tax-credit payments to the working poor. Bush said the Republican Congress should not "balance the budget on the backs of the poor." He also distanced himself from some of his own party's positions on social issues, saying that Republicans had too often portrayed "America as slouching toward Gomorrah." And he gave a speech declaring that his party had too often confused the "need of limited government with a disdain for government itself."

Bush appeared to reject the right wing's economic hard line, instead emphasizing issues associated with the Democrats, such as education. It was essential for him to try to erase Democratic management of the economy from the campaign. Under Clinton, 22 million jobs were created, poverty was reduced by one-quarter, the longest expansion in the nation's history was still proceeding and the greatest budget deficit had been replaced by the greatest budget surplus. Bush sought to foster the notion that none of this had happened as a result of difficult policy decisions, and that the economy ran on automatic pilot. "Of course we want growth and vigor in our economy," he said. "But too often there are human problems that persist in the shadow of affluence. And the strongest argument for conservative ideals ... is that they lead to greater justice, less suffering and more opportunity."

Bush encouraged punditry that he represented a "Fourth Way," a variation on Clinton's "Third Way," and that he would reform his party. Even the liberal editorial page of the New York Times accepted his premise. "The Republicans in Congress ... have a lot to learn from Governor Bush," the newspaper wrote in praise.

Bush's press conference to announce he would not answer questions about his past drug use and alcoholism made him an empathetic figure of his generation in contrast with traditional Republican troglodytes. And the attacks on Bush for being shallow, simplistic and ignorant only contributed to the image of the scion as a man of the people.

In order to shift discussion away from the merits of his proposals, which were not generally accepted, Bush strained to make the election a contest of personalities. Gore was painted as hopelessly dour, dull and dutiful. His mastery of policy was turned into an object of derision, a nerdy quirk, and the press incited to join in the fun. Before the debates, the formidable Gore was depicted as mean, nasty and unfair, a gambit to insulate Bush from actual public dislike of his platform. Gore finally took the bait and tried to demonstrate his niceness by agreeing with the nice Bush. Clinton had advised relentlessly that Gore draw the sharpest possible differences on policy, but was ignored, and nearly tore his hair out.

Once in office, a closed, harsh and ideological president replaced the seemingly open-minded, tolerant and pragmatic candidate. But the palimpsest of the earlier Bush remained to be discovered by David Cameron as a map to political fortune. Cameron's profession in his first speech as party leader to be a true "compassionate conservative" is Step 1.