McCain to Congress: No more pigs at the trough

Bush's nemesis proposes a bill that would cut back on the loot lobbyists shower on lawmakers. 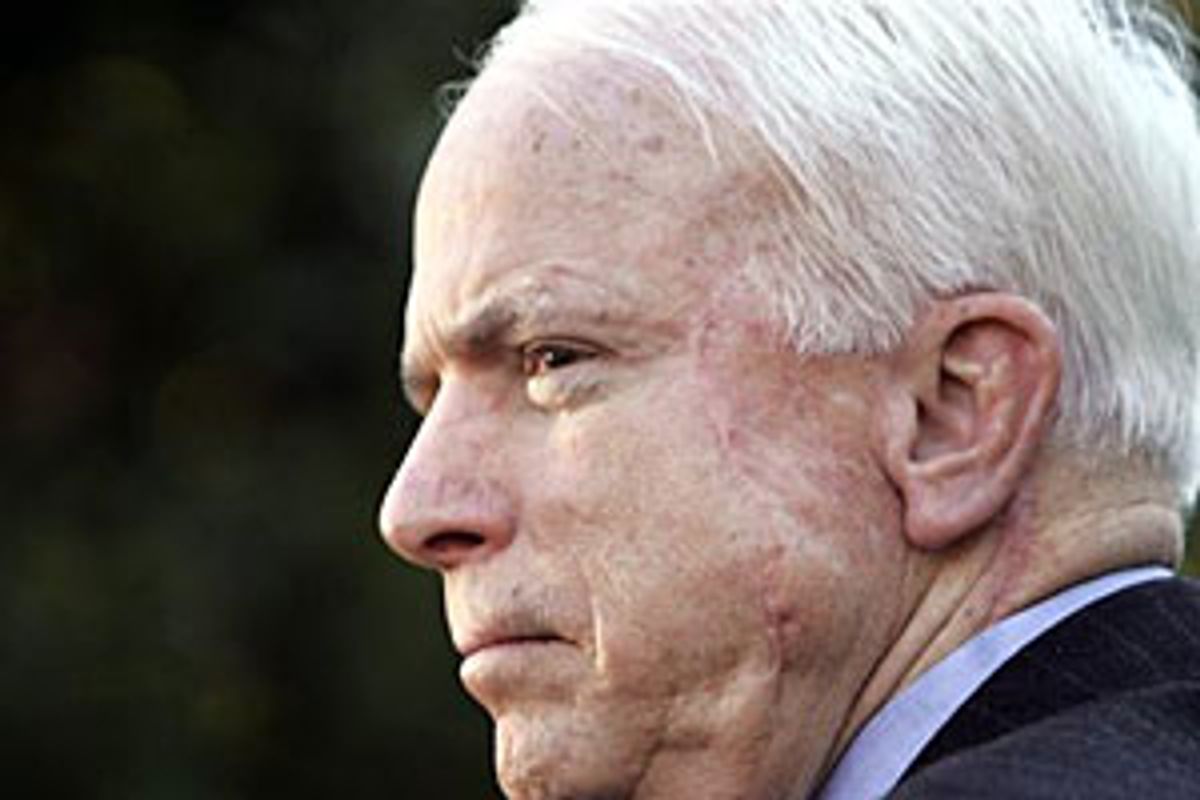 Fresh from winning a torture showdown with President Bush, Sen. John McCain, R-Ariz., took the Senate floor Friday to challenge his congressional colleagues to clean up their act. His target was the cozy and corrupting relationship between lawmakers and lobbyists that has been exposed by recent investigations of Jack Abramoff, a former lobbyist who was once a darling of congressional Republicans. His solution was a new set of rules he hopes Congress adopts next year.

"This bill is regrettably necessary," said McCain, who chairs the Senate Indian Affairs Committee, which has led the Abramoff investigation. "Much of what the committee learned was extraordinary. Yet, much of what we uncovered in the investigation was unfortunately the ordinary way of doing business in this town."

Specifically, McCain said he wanted to cut back on the steady flow of money, gifts and favors that currently pass between lobbyists and lawmakers. Despite current ethics guidelines, lobbyists have used corporate money to wine and dine members of Congress, entertain them in sports skyboxes, and whisk them away on overseas golf junkets. The money is often routed through complex networks of think tanks and charitable organizations designed to conceal its origins. Even when they follow the rules, lawmakers can legally accept discounted flights on private jets and luxury accommodations at beachfront resorts.

The Justice Department has already decided that Abramoff's operation broke the law. Abramoff's partner, Michael Scanlon, has pleaded guilty to conspiring to bribe public officials. Another White House official, David Safavian, has been charged with lying to investigators about a trip he took with Abramoff to Scotland. Abramoff is sure to face charges of his own, while several members of Congress, including Rep. Bob Ney, R-Ohio, former Majority Leader Tom DeLay, R-Texas, and Sen. Conrad Burns, R-Mont., remain under legal scrutiny.

But McCain's target is far broader than just Abramoff's activities. In fact, his bill, called the Lobbying Transparency and Accountability Act, appears to put as many new restrictions on lawmakers and their staff as it does on lobbyists. "I think it will probably affect members more than lobbyists," said Charlie Black, a leading Republican lobbyist who chairs BKSH and Associates.

In one change, members of the House and Senate would no longer be able to fly on corporate jets for the price of a commercial first class ticket, a longtime loophole that is regularly exploited by congressional leadership. Members would have to pay "fair market value" for plane rides. In the case of sports skybox seats, members would have to pay the cost of "the highest-priced seat in the arena," rather than reduced rates. Congressional ethics committees would also be asked to develop clear guidelines to describe "reasonable expenditures" that can be reimbursed by corporations when lawmakers attend conferences, golf outings or overseas junkets.

The new rules would also require lawmakers to give notice if they begin negotiating for jobs while still in office. Such conflict-ridden situations -- in which it is in lawmakers' interest to dangle legislative goodies in front of their prospective employers -- have been increasingly frequent in recent years, as lawmakers jump ship to work for lobbying firms or trade groups, like former Rep. Billy Tauzin, R-La., who recently became the pharmaceutical industry's top lobbyist. The proposal would also double -- to two years, in most cases -- the time members of Congress and the executive branch must wait after leaving government service before they can begin to lobby their former colleagues. A recent report by the Center for Public Integrity found that nearly 250 former members of Congress and former agency heads work as lobbyists.

Other changes would force far greater reporting requirements on lobbyists. For the first time, lobbyists would be responsible for disclosing every gift to a member of Congress worth more than $20. They would have to report their spending quarterly, as opposed to twice a year. They would also have to disclose in their lobbying forms grass-roots lobbying activities and their contributions to political campaigns.

The lobbying industry's only trade group, the American League of Lobbyists, plans to have a board meeting Monday to consider the merits of the McCain legislation, said Paul Miller, the group's president. He said he was concerned that the bill did not broaden the definition of lobbyists to include people like Scanlon, who accepted millions of dollars in fees from casino clients but was not required to register as a lobbyist, because he did not contact lawmakers directly. "If you want to make the system fair, you need to broaden the definition of what a lobbyist is," said Miller.

McCain's announcement followed days of backroom negotiations with Sen. Russ Feingold, D-Wis., who has also proposed a bill to reform lobbying. Though the two senators had scheduled an announcement for a bipartisan bill Friday, the press conference was canceled at the last minute because an agreement on language could not be reached. A Feingold spokesperson said the Democrat would be working in the coming months to merge his bill with McCain's proposal. In the House, Rep. Chris Shays, R-Conn., introduced a bill with the same language as McCain's bill, joining Rep. Marty Meehan, D-Mass., who has already proposed lobbying reforms.

All these proposals increase the chance that congressional ethics will be a legislative issue next year, when members of Congress are forced to put on their best face for the voters back home.