After a career of stealing from his clients and corrupting lawmakers, the one-time Republican golden boy is set to destroy the political machine he helped create. 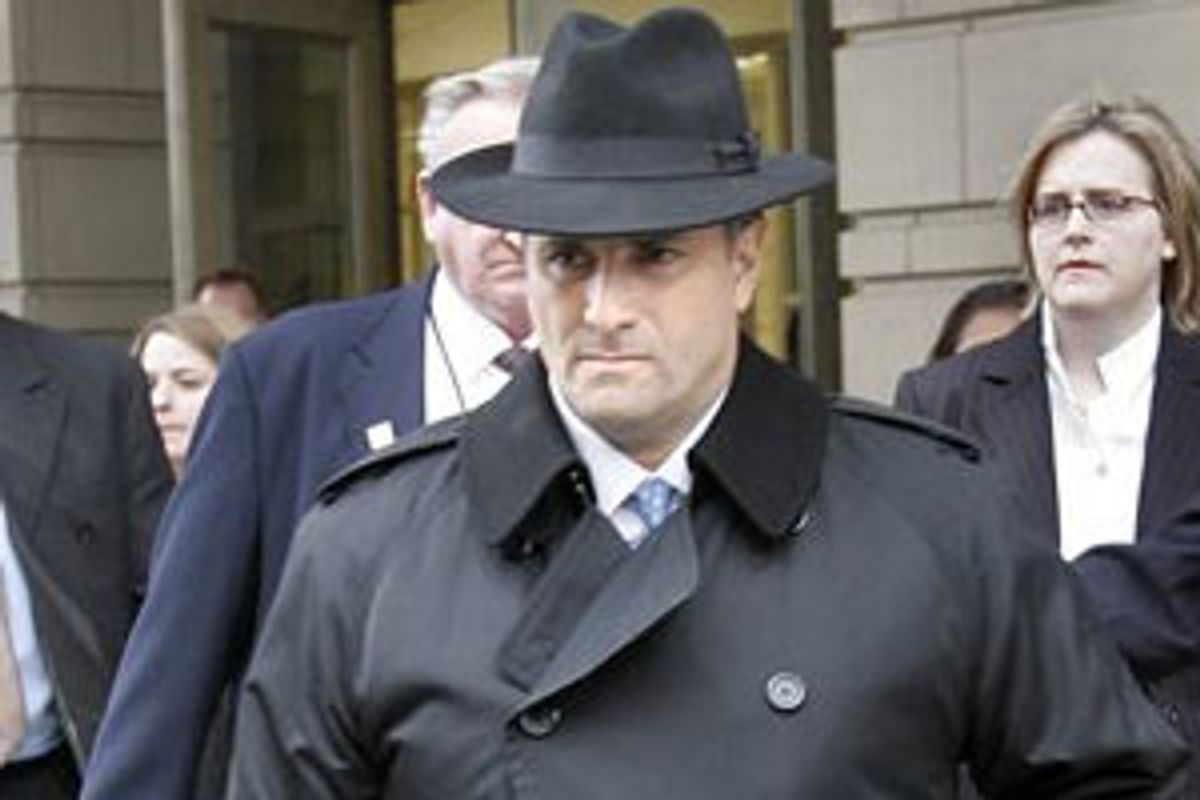 His head bowed and his pinstripes faded, the former dean of Republican lobbyists, Jack Abramoff, arrived Tuesday at the chambers of federal Judge Ellen Huvelle to confess his sins. Under detailed questioning from the court, he took the blame for a career spent stealing from his Native American clients, hiding from tax collectors and corrupting members of Congress and their staffs. It was a tortured performance played out in hushed tones. By the time Abramoff rose to beg forgiveness from the Almighty, his voice was barely audible from the gallery.

"Words will not be able to even express my sorrow," Abramoff muttered. "All my remaining days I will feel tremendous sadness and regret."

With that, Abramoff turned states' evidence. He completed his two-year transformation from Republican golden boy, congressional gatekeeper and millionaire glad-hander to disgraced snitch, a man positioned to bring down the political machine he helped create. As part of his guilty plea, Abramoff faces a recommended prison sentence of between nine and 11 years. He will likely pay at least $25 million in restitution, and another $1.7 million in back taxes.

But those are just footnotes to what is set to become the biggest political corruption scandal in a decade. No longer the target of prosecutors, Abramoff has become their pawn. "This is just the beginning of Congress' downfall," said a slightly melodramatic Melanie Sloan, director of the Center for Responsibility and Ethics in Washington, a congressional watchdog group. "Until now, it has been seen as a lobbying scandal."

The investigation, which spans at least four law enforcement agencies and 12 FBI field offices, is now clearly targeted on members of Congress and their staffs. Already prosecutors have won pledges of cooperation from two of Abramoff's former partners, Michael Scanlon, a former aide to Rep. Tom DeLay, R-Texas, and Adam Kidan. "The corruption scheme with Mr. Abramoff is very extensive and we will continue to follow it," said Assistant Attorney General Alice S. Fisher at a Justice Department press conference hours after the plea. "We are going to follow this wherever it goes."

In his plea, Abramoff appeared to tighten the prosecutorial noose around Rep. Bob Ney, R-Ohio, a one-time friend of Abramoff who has long since disavowed the relationship. Abramoff detailed the perks he provided Ney and his staff in exchange for political favors -- the golf trip to Scotland, the Super Bowl bash in Tampa, the free meals at Abramoff's Washington restaurant and the sports stadium box seats. In a statement released after the plea, Ney's spokesperson, Brian Walsh, said the lobbyist exerted no "improper influence" on Ney. "Congressman Ney has never done anything illegal or improper and the allegations in this plea agreement do not change that fact."

The plea also claims that Abramoff corruptly influenced another unnamed congressional staffer by paying his wife's nonprofit company $50,000. The allegation matches press reports of a relationship Abramoff had with Tony Rudy, another aide to former majority leader DeLay, and Rudy's wife, Lisa. A person who matches the description of Neil Volz, a former chief of staff to Ney, is also mentioned in the plea agreement for corrupt dealings with Abramoff. Rudy and Volz, who both work as lobbyists, did not return calls for comment. But the specific targets in the plea account for just a fraction of the investigation, which continues at full speed, said Fisher. Of Abramoff's testimony, she said, "We have not attempted to list each and every statement" in the plea.

Recent reports suggest a long lineup of members of Congress and family who still face scrutiny, including DeLay and his wife, Christine, Sen. Conrad Burns, R-Mont., and Rep. John Doolittle, R-Calif., and his wife, Julie. Dozens more lawmakers, including leaders from both parties, supported the initiatives of Abramoff's clients and were later rewarded by political contributions. All but six of the top 20 recipients of campaign contributions from Abramoff's clients are Republican.

At the heart of the Justice Department's case is a quaint, if not naive, claim that is unlikely to take hold in Washington, even after the last indictment is handed out. "Government officials and government action are not for sale," Fisher declared at the afternoon press briefing. It is a statement that is often repeated, and universally aspired to, but that is demonstrably false. In recent years, billions of dollars have been spent by lobbyists and wealthy interest groups to buy access to politicians, pad their war chests, and pay for grass-roots political outreach. In nearly every major bill that faces Congress -- whether it be for defense spending or another tax code rewrite -- big spenders find success at exponentially greater rates than those who eschew political spending. As Abramoff once explained to the New York Times, back when he still maintained his innocence, "Eventually, money wins in politics."

In taking on individual lawmakers and their staffs, prosecutors will seek to demonstrate a clear quid pro quo between the money, trip or meal Abramoff gave and political favors his clients received. "It's a very difficult line to draw," former federal prosecutor E. Lawrence Barcella Jr. said of the legal barriers to bribery or corruption cases. "Intent on both sides is necessary." The more lasting effects of the Abramoff case are likely to come from Congress itself, where a number of proposals to stiffen ethics laws and restrict lobbying have been introduced. On Wednesday, former House Speaker Newt Gingrich, a man once beset by ethics scandals of his own, is even set to announce his own prescription for lobbying reform.

In the meantime, Abramoff faces a decade in prison, probable bankruptcy and a lifetime of shame. The former president of the College Republicans who rose through the ranks to the top of the political totem poll, Abramoff has long been known as a devoted conservative, a religious man and a die-hard Republican partisan. With his plea today, he made final his betrayal of everything he once claimed to hold dear.