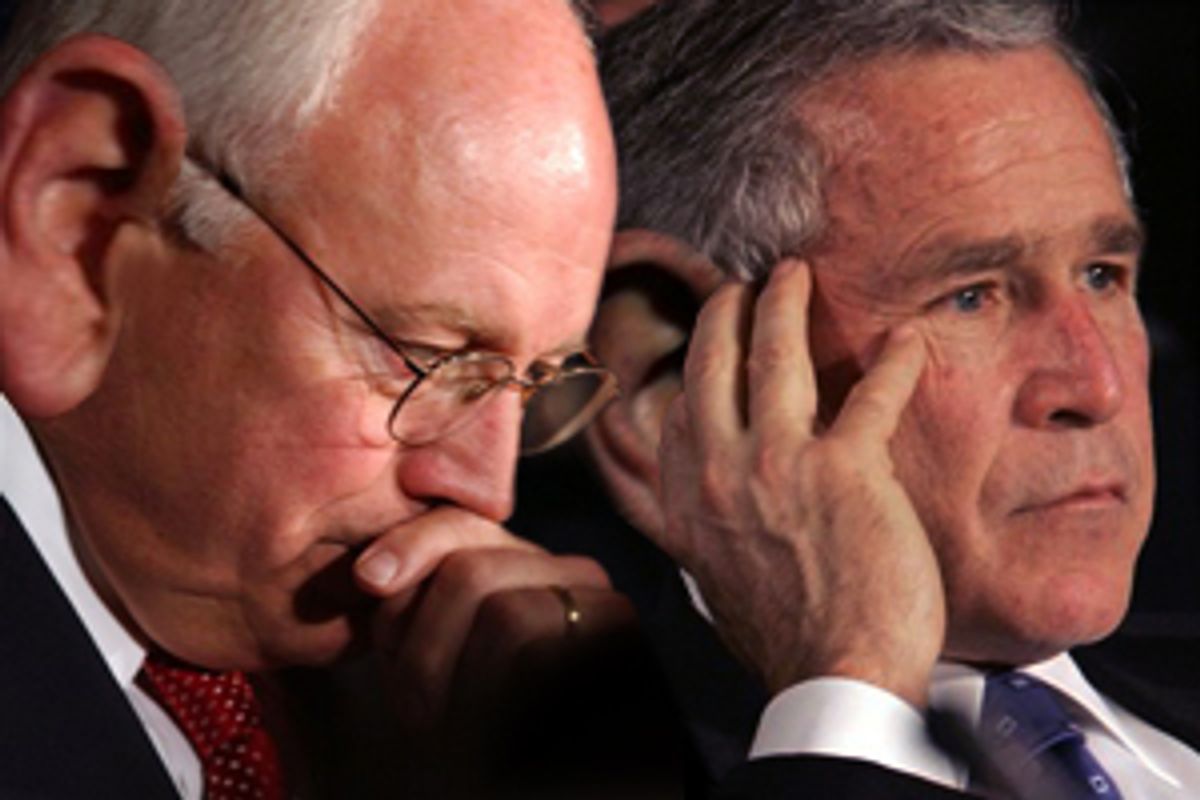 For the last month, civil liberties attorneys have been searching for the picture-perfect plaintiffs to challenge President Bush's warrantless wiretapping program. The dilemma they faced was obvious: The only known targets of the secret spying are suspected or convicted terrorists, hardly the most politically palatable victims of government abuse. On Tuesday, the American Civil Liberties Union revealed its solution to this problem in a spectacular fashion. It filed suit against the National Security Agency with a collection of litigants that reads like the guest list of an Arianna Huffington dinner party.

Begin with Vanity Fair columnist Christopher Hitchens, an Iraq war booster who holds the distinction of being the only person to condemn both Mother Teresa as a fraud and Henry Kissinger as a war criminal. Then add Larry Diamond, a Stanford academic who advised the Bush administration on democratization in Iraq, and James Bamford, an Iraq war opponent who has written extensively about the National Security Agency. Tara McKelvey, a writer on military torture for the American Prospect, makes an appearance, as does Barnett Rubin, a New York University professor who advised the United Nations on the formation of a new Afghan government. And for good measure, the litigants also include Greenpeace, the environmental group that has never been accused of any ties to al-Qaida, as well as several other lawyers.

The glue that binds this motley crew of pundits, scholars and activists was a legal theory that the ACLU hopes will convince federal courts to declare the wiretap program unconstitutional. In a Tuesday conference call with reporters, the ACLU did not provide any new evidence about who was targeted by the NSA wiretaps. Rather, it argued that the mere disclosure of the hitherto secret program has had a "chilling effect" on the plaintiffs' willingness to communicate openly on international phone and data lines, violating their privacy and First Amendment rights. "Lawyers, journalists and scholars are already changing their behavior," explained Ann Beeson, the ACLU's associate legal director. "We have a lot of evidence of harm."

The ACLU filed its case in federal district court in Michigan, a venue known for its sympathy to wiretap cases. More than 600 miles away in New York City, a group of attorneys at another civil liberties group, the Center for Constitutional Rights, filed their own suit against President Bush and his administration. In this case, the plaintiffs are five attorneys who have spent the last several years representing exactly the sort of suspects that Attorney General Alberto Gonzales has boasted the wiretap program targets: members of al-Qaida or groups tied to al-Qaida. "Our beliefs that we have been electronically surveilled are objective and severe," explained Michael Ratner, CCR's president, noting that the wiretapping may have illegally violated attorney-client privilege. "Our routine days are spent in these kinds of communications with clients."

The Justice Department immediately dismissed the lawsuits as frivolous. "We believe these cases are without merit and plan to vigorously defend against such charges," said spokesman Brian Roehrkasse in a statement. The NSA, which for years shrouded even its own existence in secrecy, released a terse statement: "We have no information to provide."

The administration's legal allies are already arguing that the lawsuits will be thrown out of court because the litigants lack standing to sue, since they cannot show that they have been harmed. "The notion that there is existential harm or psychological harm that ensues because you might be listened to is just completely nebulous," said David B. Rivkin Jr., a Washington attorney who worked for the administrations of Ronald Reagan and George H.W. Bush. "You cannot allege a hypothetical or theoretical chilling."

The attorneys bringing the suit pointed to a large body of precedent that grants standing if plaintiffs can show they have a reasonable fear of being victimized by the government. Such rationales have been used to challenge laws before they take effect, including a recent challenge to Internet porn statutes. "The courts have long recognized that you can challenge a government practice or a program even if it has never been enforced against you, if you have a credible fear that it will be used against you," said David Cole, a Georgetown law professor and an occasional Salon contributor, who is assisting CCR in its case.

In the morning conference call, ACLU director Anthony Romero explained that the organization had intentionally chosen litigants from a wide range of professions. In interviews afterward, several of them said they had only joined the case after personal requests from friends or colleagues at the ACLU. "We wanted to pick individuals who did have unique experiences and unique backgrounds," Romero said.

The plaintiffs spoke of the political dangers of the secret NSA wiretapping, as well as their own concerns about having confidential communications with contacts overseas. Diamond, the former Iraq advisor, said it would be harder for him to reach out to human rights whistle-blowers in the Middle East, or do political research that requires confidential sources. Rubin said the program set a poor example for countries like Afghanistan, which is still working out the limits under its own constitutional system. Hitchens worried about the ability of journalists to promise confidentiality to sources. "People who are now defending this program for partisan reasons will have every reason to regret it when it is turned on themselves," Hitchens warned.

Another plaintiff, Albuquerque attorney Nancy Hollander, who often represents accused terrorists or terrorist sympathizers, said she would no longer be able to communicate with her clients electronically. As she put it, "I can't assure my clients that our conversations, our e-mails, our faxes are private."

The ACLU's Beeson went out of her way to underscore that the morning conference call with journalists might at that very moment be the subject of NSA eavesdropping, since one of the participants, Rubin, had called in from a phone in Kabul, Afghanistan. As she said, ominously, "It's highly likely that this call could have been monitored."