Bush's State of the Union address played like a greatest hits of empty policy promises -- while the Dems clapped and frowned in disunion. 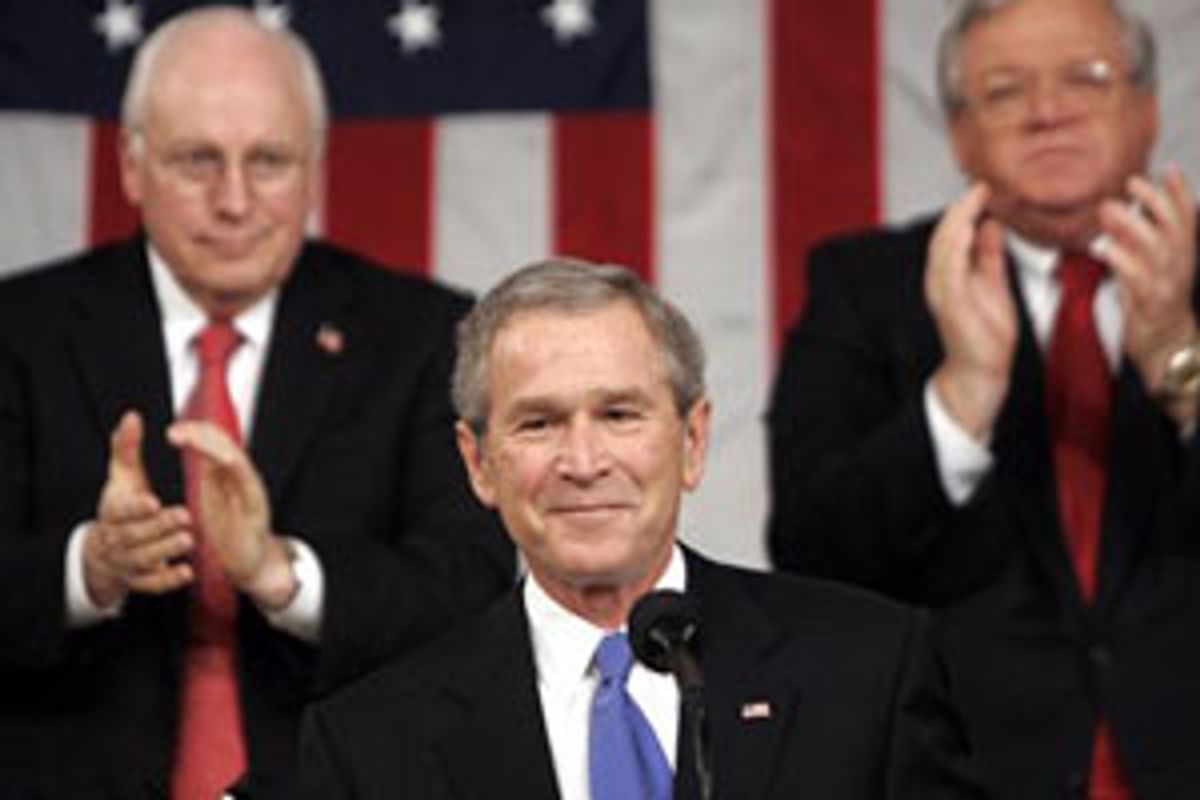 In his fifth State of the Union address Tuesday night, President Bush delivered a bold statement to the nation: He had nothing new left to say.

The hourlong speech he delivered was cut almost entirely from his past congressional and policy addresses. His proposals had already been proposed. His defenses had already been offered. His visionary statements were visionary months or years ago. Rather than the live feed, the networks could have just simulcast tape from 2004 or 2005: With the exception of Bush's opening homage to Coretta Scott King and his defense of warrantless wiretaps, America might not have noticed the difference.

There were no 16 words to haggle over, no new hints at foreign invasions, or calls for sweeping reforms. Though Bush faces some of the lowest polls of his presidency, he did not try to match Bill Clinton's performance in 1998 when Clinton wowed the nation despite news of his affair with Monica Lewinsky. Bush appeared to be going through the paces, a lame duck coasting toward the midterm elections. He no longer boasted of vast political capital, piled high after his 2004 reelection. Instead of a Social Security privatization, the hallmark of last year's address, he proposed a bipartisan commission to study the problem.

Almost every line was an echo. In his 2005 State of the Union, Bush called for "expanded Health Savings Accounts." On Tuesday, he announced he would "strengthen Health Savings Accounts." In 2005, he promised to fund green projects, "from hydrogen-fueled cars, to clean coal, to renewable sources such as ethanol." On Tuesday, he pledged to invest in "zero-emission coal-fired power plants ... pollution-free cars that run on hydrogen ... cutting-edge methods of producing ethanol." In 2005, he promised to "ensure that human embryos are not created for experimentation." On Tuesday, he pledged to prohibit "creating or implanting embryos for experiments."

On immigration, Bush offered a "humane guest worker program that rejects amnesty," an echo of his 2004 declaration to "oppose amnesty" in favor of "my temporary worker program." He boldly asked Congress to reauthorize the Ryan White Act, an HIV/AIDS treatment program, repeating almost verbatim the same request from the 2005 State of the Union.

Even the few new proposals seemed simply to have been substituted for previous, ill-fated ideas. Where he once called for a ban on steroids in professional sports, he now called for lobbying and ethics reform. Where he once called for a gang prevention program, he now suggested math and science training for high school teachers. Rather than call for drilling in Alaska, he declared that America was addicted to oil -- but offered no hints that he would support stricter gas mileage regulations.

When it came to the war in Iraq and the war on terror, the president's assertions were a patchwork of familiar arguments. There would be no retreat. America would spread freedom. "We are on the offensive in Iraq, with a clear plan for victory," Bush said, his only response to the 60 percent of Americans who disapprove of his handling of that war. "We will never surrender to evil," he said, evoking the memory of a more memorable speech in 2002 when he took aim at the "axis of evil."

"Nothing new," said Senate Minority Leader Harry Reid, after he left the floor of Congress. "No surprises," commented Minority Whip Dick Durbin of Illinois. They were partisan jabs, but also sounded like an objective report.

Republicans spun the speech by repeating old talking points about Iraq, earmarking, and energy independence, taking comfort in all that the president "reaffirmed." Like the politicians they covered, more than 100 journalists milled about, scribbling in their notebooks.

With so little suspense, lawmakers in the gallery entertained themselves during the speech by focusing on whether to stand or sit during their applause. Democrats stood for any mention of American workers, immigrant labor and Social Security, aiming to rub in their disruption of Bush's speech when he chided Congress for failing to pass his privatization plan in 2005. Republicans stood for tax cuts, the Patriot Act and Samuel Alito, the newest Supreme Court judge, who sat wide-eyed and wooden in the front row. For their part, the military brass walked the thin green line with their cheers. They sat quietly when Bush vowed to keep Iran free of nuclear weapons, but they clapped respectfully when Bush called for a "free and democratic" Iran.

Judiciary Committee chairman Arlen Specter was noticeably slow to rise when the president defended his warrantless wiretap program as constitutional. Arizona Sen. John McCain spastically banged his hands together at the mention of lobbying reform. Defense Secretary Donald Rumsfeld was noticeably the first to jump out of his seat when Bush demanded that Hamas, the recent victors in the Palestinian elections, recognize Israel and reject terrorism.

Like misfiring pistons, Democrats made a very public show of their disunity, especially on the issue of Iraq. Sen. Joe Lieberman of Connecticut stood almost alone among the caucus to applaud the president's vow to keep politicians from determining U.S. troop levels in Iraq. (That, Bush insisted, would be left to the military commanders.) When Bush said America was in Iraq to win, California Sen. Dianne Feinstein stood to applaud, catching a sideways glance from a comfortably seated Reid.

Massachusetts' John Kerry appeared particularly challenged by one passage from the president: "We must keep our word, defeat our enemies, and stand behind the American military in its vital mission." Kerry froze, looking unsure of whether to stand or sit during the applause. Should he show his support for the troops? Would that mean he was endorsing the president's pledge to stay in Iraq? He resolved the dilemma by standing, after a moment's contemplation, while moving his lips to repeat the president's pledge to "stand behind the American military."

Up in the bleachers, a few rows behind first lady Laura Bush, a single member of the audience decided to lie down throughout the speech. Rex, the bomb-sniffing dog, earned an invitation because his handler, Sgt. Jamie Dana, had survived an improvised explosive device in Iraq. Rex, who lay next to Dana, was meant to represent the enduring bonds that survive the horrors of war. But by all appearances, the dog wasn't particularly taken by the symbolism or the speech. It was a pose that seemed somehow wise in retrospect.