Rejecting criticism and mouthing meaningless bromides, Bush gave a speech so stagnant it would have made the Politburo proud. 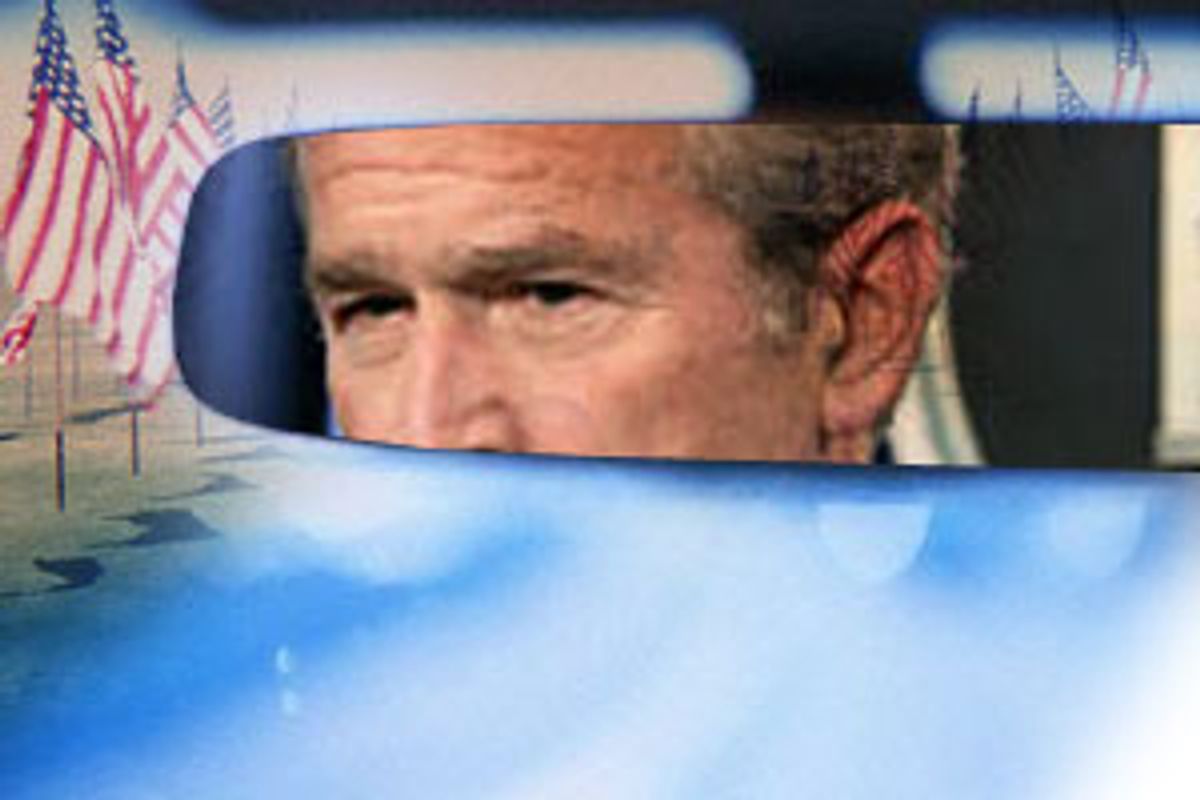 The most significant and memorable statements in President Bush's lackluster State of the Union address, the phrases that most clearly and succinctly captured the state of his presidency after five years, were his heartfelt and hostile admonishments: "Hindsight alone is not wisdom. And second-guessing is not a strategy."

Bush did not claim to have learned any lessons from the past. Nor did he propose any new strategies. By assailing "hindsight" and "second-guessing," he attempted to deny legitimacy to critics and criticism. He banished analysis of his previous actions from consideration in formulating current or future policy. He denounced "isolationism" but asserted his own isolation. Anyone who does not adhere to the party line must be a dangerous and subversive revisionist. George Santayana ("Those who cannot remember the past are condemned to repeat it") is uninvited.

By denigrating "hindsight," Bush made his mark alongside the line in the sand drawn the week before by his chief political advisor, Karl Rove. "At the core," said Rove, "we are dealing with two parties that have fundamentally different views on national security. Republicans have a post-9/11 worldview, and many Democrats have a pre-9/11 worldview." With these comments, Rove and Bush signaled the Republican midterm elections strategy, also a repetition of past plans. Democratic candidates should expect television commercials morphing their faces into Osama bin Laden's, like the spot used in 2002 to defeat then Sen. Max Cleland of Georgia, the decorated triple-amputee Vietnam War veteran.

The latest NBC-Wall Street Journal poll, taken on the eve of Bush's speech, indicates unusually intense interest in the midterms, and such intensity at this early point suggests a large Democratic turnout. Bush's appeal that "our differences cannot be allowed to harden into anger" was an effort to soften his polarizing image. Meanwhile, evoking Sept. 11, as always, he demarcated who was and was not truly patriotic and entitled to speak up. At the low ebb of his presidency in public approval, he carefully orchestrated his biggest speech of the year to impose homogeneity, conformity and the stifling of "second-guessing."

Bush's intent to stigmatize opposition was exemplified by the absurd removal from the visitors gallery of the harmless and undisruptive antiwar Gold Star Families for Peace founder, Cindy Sheehan, who had been given a ticket to the speech by a Democratic member of Congress. Her offense was wearing a T-shirt embossed with the number of U.S. military killed in Iraq: "2245 Dead. How many more?" She is not quite Santayana (or Brent Scowcroft), but any questioning of the price and burden of war is sufficient to merit ejection from the president's sight line.

Bush has entered his Brezhnev era of stagnation. Everything -- from the latest five-year plan to the grandiose promise of world transformation -- was repetitive and abstracted from grinding realities. His attempt to use the first year of his second term for permanent revolution at home, following Rove's script, has failed. Social Security privatization is now whittled down to a commission, the sort of gambit employed when a leader lacks support. But diminished prospects did not dim his extravagant rhetoric.

"We seek the end of tyranny in our world," Bush proclaimed. (In his 2005 State of the Union address, he pledged "the ultimate goal of ending tyranny in our world.") It would have demanded complicating "hindsight" to acknowledge that Hamas has attained power in Palestine; Hezbollah has greatly increased its influence in Lebanon; the Muslim Brotherhood has made unprecedented gains in Egypt; a Shiite extremist, Mahmoud Ahmadinejad, has become president of Iran; and theocratic Islamist Shiite factions aligned with Iran will govern Iraq, all through elections that no one has challenged as unfair (with the exception of those in Egypt). Just two days before Bush's speech, Secretary of State Condoleezza Rice admitted, "I don't know anyone who wasn't caught off guard by Hamas' strong showing." Of course, there had been many warnings issued by many serious people that fundamentalism is on the rise in the Middle East. Rice's confession of deafness and blindness, however, did not prevent Bush from having his recurrent vision: Happy days are here again.

For every changed situation, he hoists tattered slogans. In Iraq, he said, "we are winning." Just before his speech, the University of Maryland Program on International Policy Attitudes released a study of Iraqis, reporting that 47 percent overall and 88 percent of Sunnis approve of "attacks on U.S.-led forces," and 80 percent want a timetable for U.S. withdrawal. In his speech, Bush did not define "winning." He simply asserted the word as though the certitude with which he uttered it would bring about whatever it is he means by it.

On the Palestinian elections, in his press conference on Jan. 26, Bush's first response to Hamas' victory was to praise the election process: "I like the competition of ideas." (The first idea articulated in Hamas' charter: "Israel will exist and will continue to exist until Islam will obliterate it, just as it obliterated others before it.") But by ceasing the peace process in the face of the second intifada for more than a year after becoming president, humiliating Palestinian President Mahmoud Abbas by refusing to meet with him on his first trip to Washington, and neglecting to give him any tangible progress to show to his people, Bush's policies contributed to the overthrow of Palestinian moderates. In his State of the Union address, Bush urged Hamas to become something other than Hamas. If it fails to do so, he has no policy, the clueless approach already expressed by Rice.

On Iran, designated a member of the "axis of evil" in his 2002 State of the Union address, and currently developing its nuclear programs in defiance of the world community, Bush gropes for certainty. When he came into office he rejected diplomatic outreach to then President Mohammad Khatami and the so-called reform elements, and then rejected feelers from the Iranian mullahs for assistance in dealing with the Taliban and al-Qaida and for an overall settlement of U.S.-Iranian differences. He utterly miscalculated the increased influence of Iran as a consequence of the Iraq war. On the eve of the Iranian election last year, Bush denounced extremist candidate Ahmadinejad, predictably inciting support for him. Until 2005, Bush was reluctant to join the Europeans in containing Iran's nuclear programs. Now, he has no practical military or economic options. Unilateral action is too implausible even to pretend as a possibility. Bush is reduced to describing the Iranian people who elected Ahmadinejad as being "held hostage" and to calling upon them to overthrow the regime. He has a scenario, but not yet a policy.

By his repeated denunciations of "radical Islam" in his speech, Bush cast his "war on terror" as a religious crusade, fitting exactly the perspective of al-Qaida and al-Qaida-like sects and providing the basic motivation for suicide terrorism as documented by University of Chicago scholar Robert Pape in his landmark study, "Dying to Win." Bush appears more determined to enhance his stature in his own mind as a world historical hero battling barbarian hordes than to adopt careful language and strategy that might reduce and isolate radical Islamists.

With every phrase, Bush achieves the polar opposite of what he claims to intend. His orotund rhetoric about "freedom on the march," "democracy," "tyranny," and "evil" undermines itself. What happens when "democracy" does not advance democracy and "freedom" is used to oppress? Bush's refusal to accept paradox, that his good motives may have unintended consequences, leads him to reject "hindsight." "Far from being a hopeless dream, the advance of freedom is the great story of our time," Bush said in his speech. Rather than reassess his own actions that have made his goals ever more distant -- "second-guessing" -- he clings to his self-image as a warrior-savior. But Bush may have become such a universally tainted figure that almost anything he says, especially in the language of idealism, is now discredited.